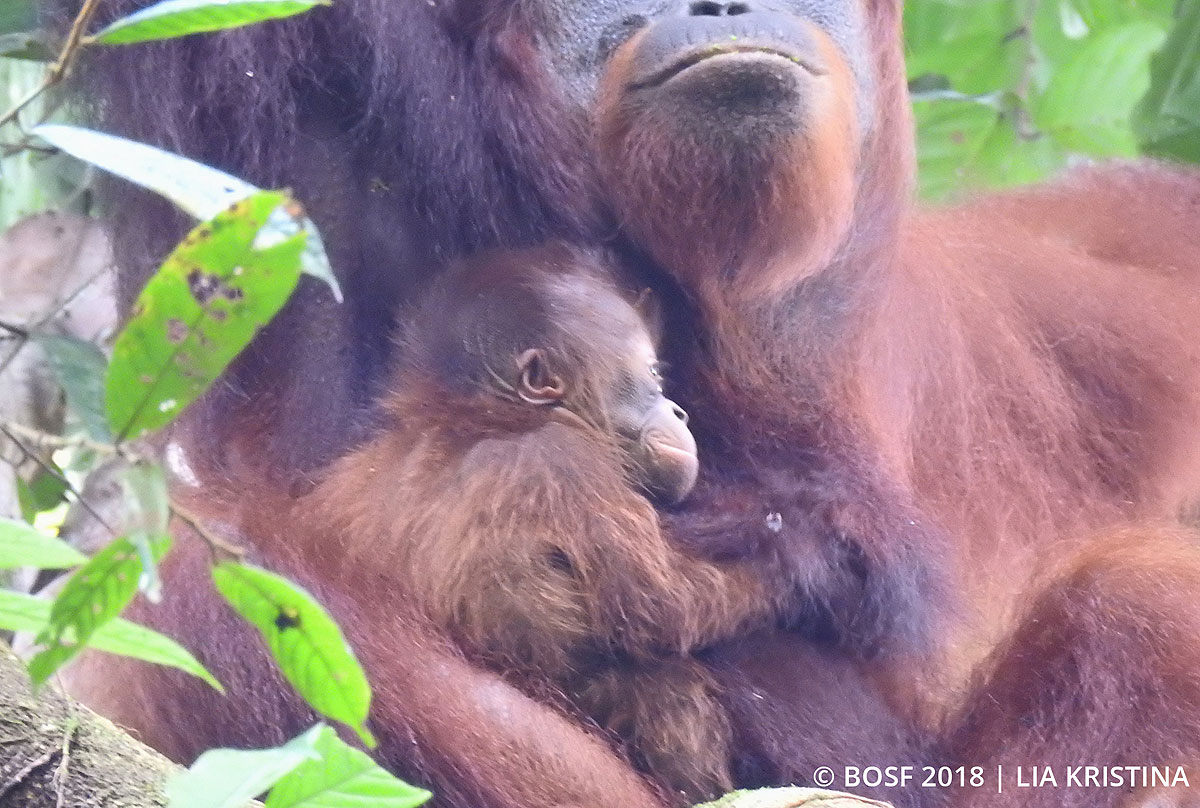 Text by: Lia Kristina, Veterinarian from Nyaru Menteng, in the TNBBBR

October 10, 2018 — “Ba De Ya, say do you remember… Ba De Ya, dancing in September… Ba De Ya, never was a cloudy day”, go the lyrics of the iconic song ‘September’ by American musical act Earth, Wind & Fire. September must have been a significant month for the band; just as it was this year for our Post-Release Monitoring (PRM) team in the Bukit Baka Bukit Raya National Park (TNBBBR), Central Kalimantan. Following a baby bonanza in the Bukit Batikap Protection Forest several months prior, this time it was the TNBBBR’s turn to welcome a new baby!

On September 27, PRM team members Hapri and Bery were busily observing Clara and Clarita, a mother-infant pair we recently released in the TX150 area, when movements were suddenly detected up in the trees. Another orangutan was approaching! Hapri and Bery rushed to check the transmitter, and learned that the approaching orangutan was Ijum, a female we released on October 8, 2016. Hapri and Bery immediately contacted Domi and I; we were in another area patrolling for orangutans like Ijum who had long gone unobserved.

Domi and I met up with Hapri and Bery to conduct observations together. At first, Ijum appeared to be alone, but after taking a closer look through binoculars we spotted a very tiny baby glued to her belly! Surprised, we quickly took notes and observed Ijum and her baby until they nested. We then conducted nest-to-nest monitoring on the pair for the next three days.

Ijum seemed to be very happy with her baby: She could not stop kissing and caressing her new bundle of joy. During our observations, Ijum would cease her exploration of the forest to build a nest whenever her baby let out a cry. She breastfed her newborn as she rested, and like all mothers was quite protective and sensitive with her baby. It may take some time before we are able to determine the sex of her baby. 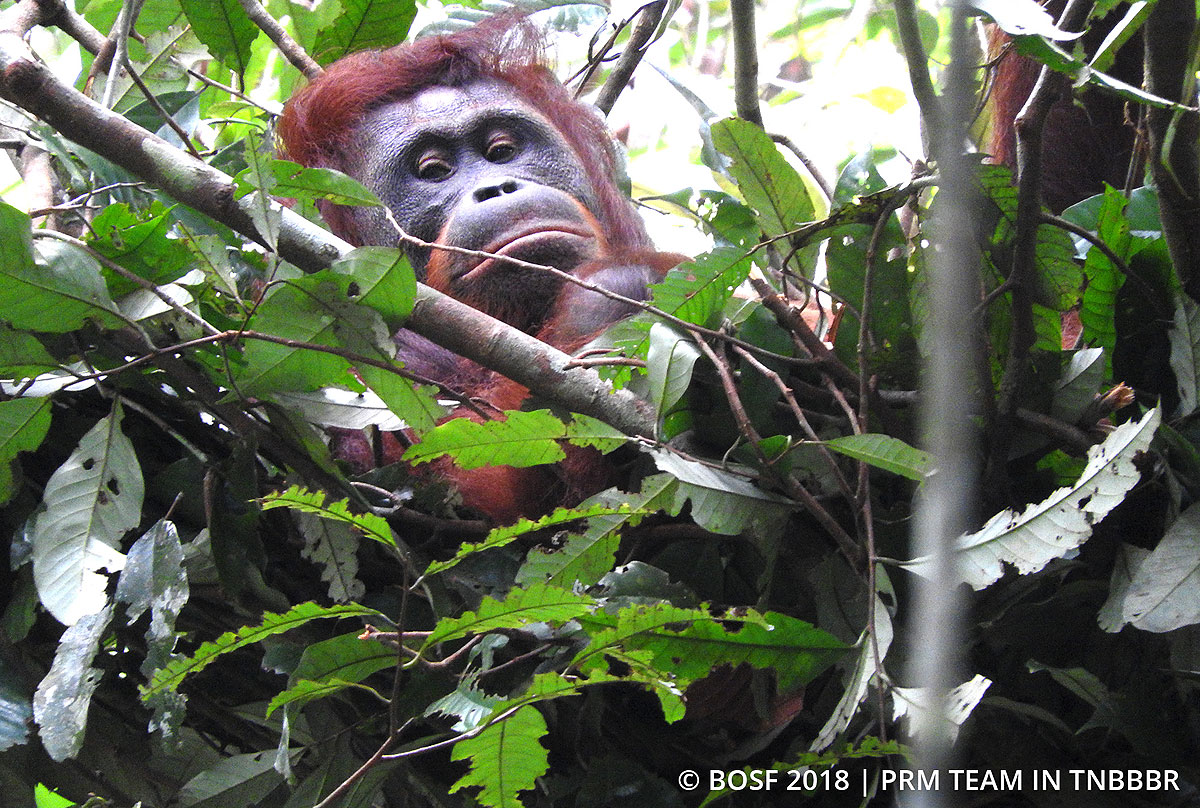 Over the three-day monitoring period, both mother and infant were observed in good health. Mother Ijum heartily ate various types of fruit and tree bark, with the baby actively suckling almost the entire time. Ijum was also seen meeting up with Clara and her baby, Clarita: Perhaps it is natural for new mothers to bond with one another, to coexist and learn together for a certain period. 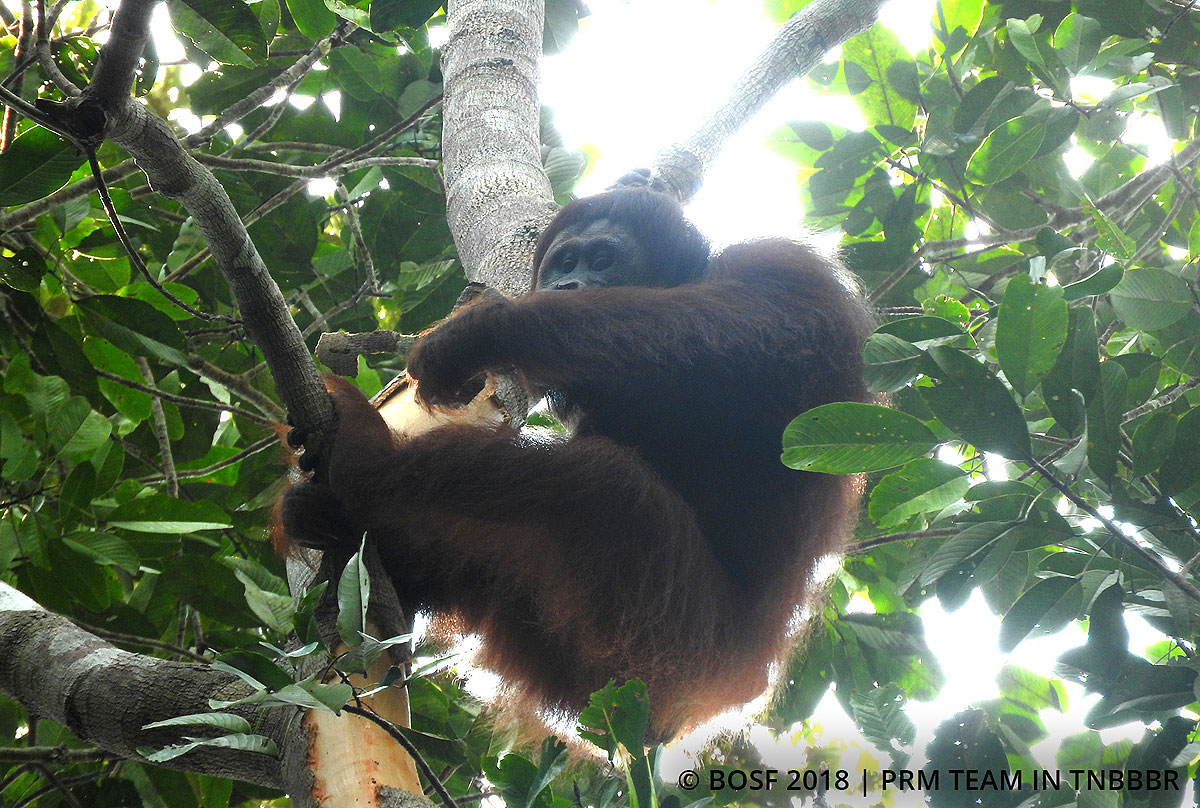 Ijum’s baby is the first to be born to a released orangutan in the TNBBBR, and is the 13th wild-born baby overall from our three release sites in East and Central Kalimantan. This is wonderful news for future, sustainable wild Bornean orangutan populations. We sincerely hope that this mother-infant pair will thrive in the forests of the TNBBBR.