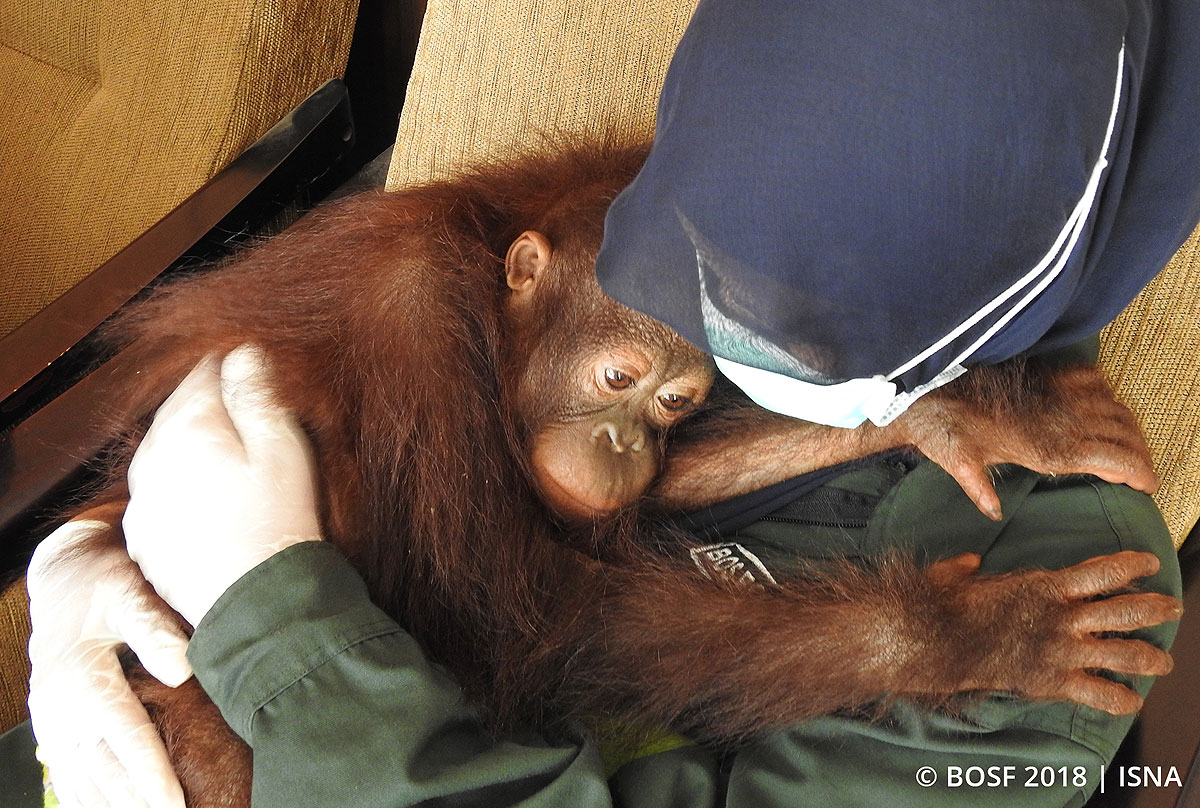 October 4, 2018 — Releasing rehabilitated orangutans back to the forest is not the end of the orangutan conservation story. The BOS Foundation has released 52 orangutans to forests in East and Central Kalimantan this year alone, yet is still taking in orphaned and rescued baby orangutans at an alarming rate.

On September 14, a team from BOS Foundation Samboja Lestari, in East Kalimantan, travelled to the East Kalimantan BKSDA Office in Samarinda to examine and collect a male orangutan baby, estimated to be around three years old. The BKSDA had earlier confiscated the baby from a local resident of Bengalon Subdistrict, in East Kutai Regency, East Kalimantan, following a tip-off from local police.

The resident claimed to have found the baby orangutan in a yard close by his house, and had allegedly kept the baby for about four weeks. While in captivity, the baby was placed in an empty house next to the resident’s home, and was given only bananas and water.

At the BKSDA Samarinda office, the baby orangutan showed no signs of aggression; rather, he looked weak and was suffering from a fever. Our accompanying vet quickly gave him a antipyretic medicine to reduce his fever, and covered him with a warm blanket. Feeling cosy, the baby boy – whom we later named Dennis – quickly fell asleep in the arms of our babysitter and stayed that way during the entire journey back to Samboja Lestari. 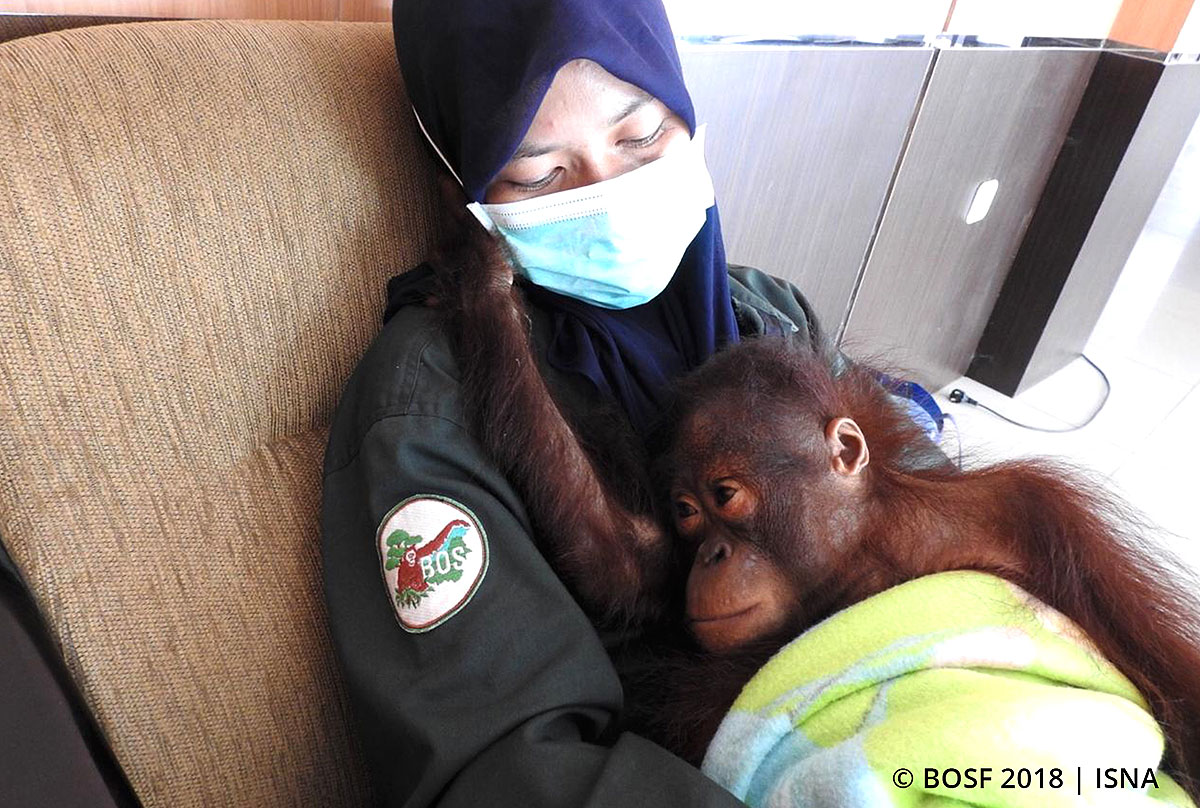 Dennis is currently undergoing quarantine at the Samboja Lestari Orangutan Rehabilitation Centre, and will soon have a more comprehensive health examination.

Meanwhile, five-year-old Jessy arrived at BOS Foundation’s Nyaru Menteng Orangutan Rehabilitation Centre on September 30, after being rescued by a joint team from the Central Kalimantan BKSDA and the BOS Foundation. She was confiscated from a local resident of Pulang Pisau Regency, in Central Kalimantan, who had held her captive for four long years!

The resident claimed to have found Jessy crossing a dirt track in a palm-oil plantation area in an unfortunate condition; with a broken right arm. Feeling sorry for Jessy, the local resident took her home to care for her, and had treated her as a human child ever since. 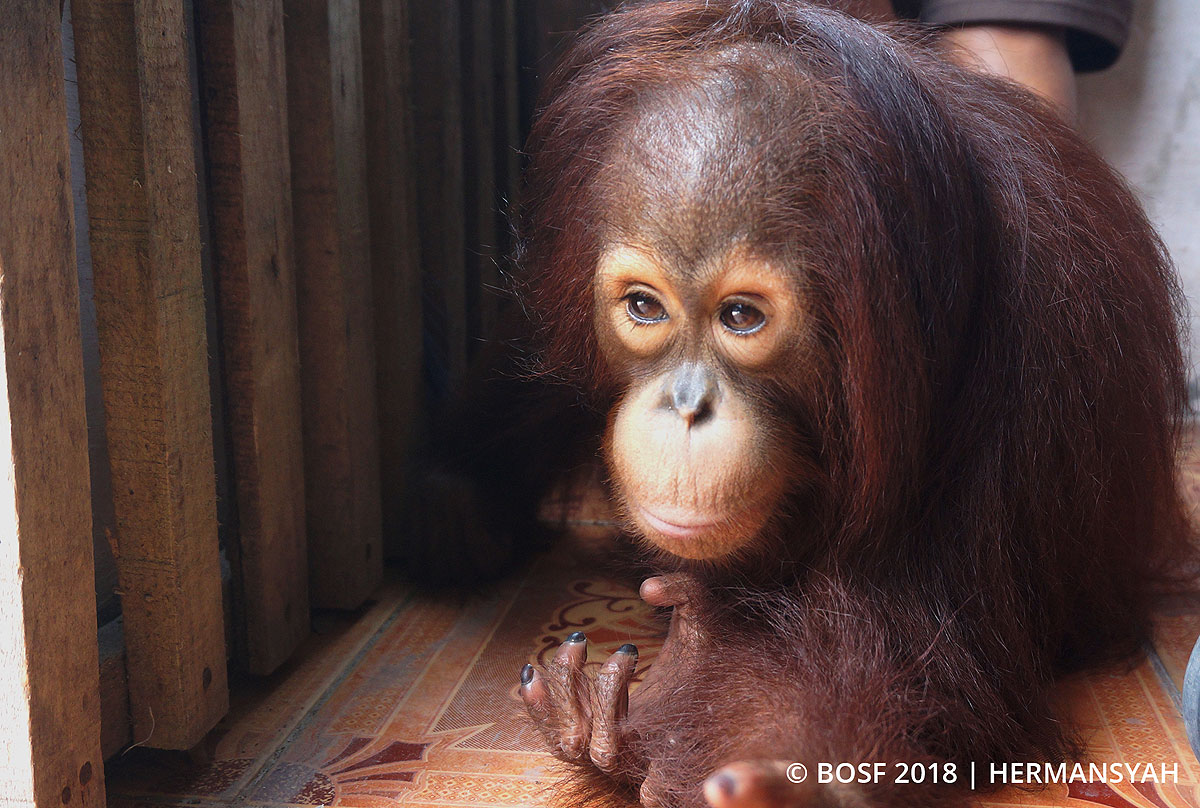 An initial examination conducted by one of by our veterinarians, Maryos Vigoury Tandang, revealed that Jessy was in relatively good health. Like Dennis, Jessy is also currently undergoing quarantine and more thorough health checks at Nyaru Menteng’s Baby House.

Our dedicated team is committed to providing the best possible treatment and care for these two babies, and the many others like them that end up at our rehabilitation centers. We are hopeful these two babies have bright futures, and one day will get the chance to return to their true home, the forest.