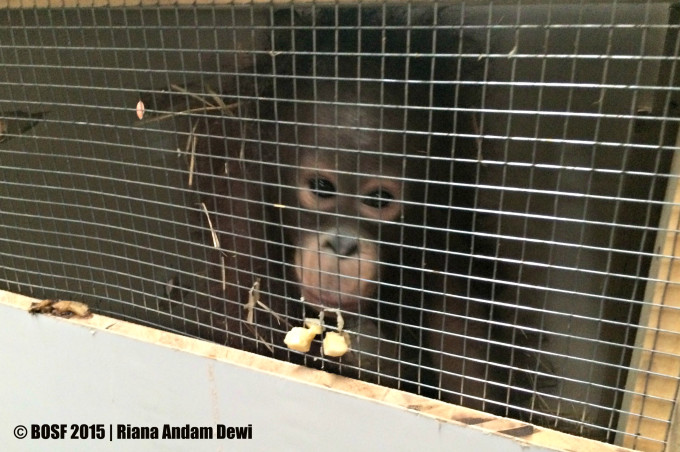 OCTOBER 10, 2015 —  The Indonesian Government represented by the Directorate General of Natural Resources and Ecosystem Conservation of the Ministry of Environment and Forestry and the Indonesian Embassy in Kuwait City in collaboration with the BOS Foundation has successfully repatriated a 2-year old baby orangutan.

Bogor, 14 September 2015. In July 2015, the Indonesian Embassy in Kuwait received information from the Kuwait International Airport of an intercepted attempt to illegally smuggle two baby orangutans into Kuwait from Jakarta. The Indonesian Embassy quickly responded by coordinating with the Ministry of Environment and Forestry, whilst the Kuwait airport authority placed the young orangutans under the temporary care of the Kuwait Zoo.

An examination on the two revealed that they are both female. One is estimated at 2 years old, while the other is only 6 months old. The Kuwait Zoo then requested the Indonesian government to facilitate repatriation of both orangutans at the earliest possible convenience as they lack the experience in caring for this species of great ape and the funds for repatriation. 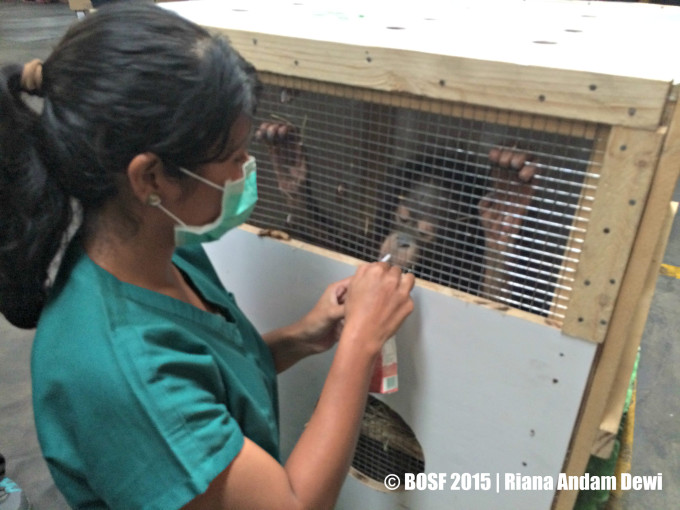 The Indonesian government through the Directorate General of Natural Resources and Ecosystem Conservation of the Ministry of Environment and Forestry in collaboration with the Indonesian Embassy in Kuwait City and the BOS Foundation, transported the older baby orangutan aged 2 years, back to Indonesia on the 13 September 2015 by Kuwait Airways (KU415). The flight landed in Soekarno-Hatta International Airport, Tangerang on 14 September 2015, 15:50 local time.

For this repatriation the BOS Foundation supported the government in funding the transportation, providing advice and the necessary Standard Operatiing Procedures to ensure the safe transportation of the baby orangutan during transit and also on-arrival care by an experienced BOS Foundation veterinarian at Jakarta airport.

As soon as the transport cage carrying Moza, the name of the baby orangutan, arrived in the cargo terminal area, BOS Foundation veterinarian, Meryl Yemima Gerhanauli conducted an initial examination and found that Moza was in a very good health after her 10-hour flight.

After she was fed, she was transferred to the quarantine facility in Taman Safari Indonesia, Cisarua, Bogor. 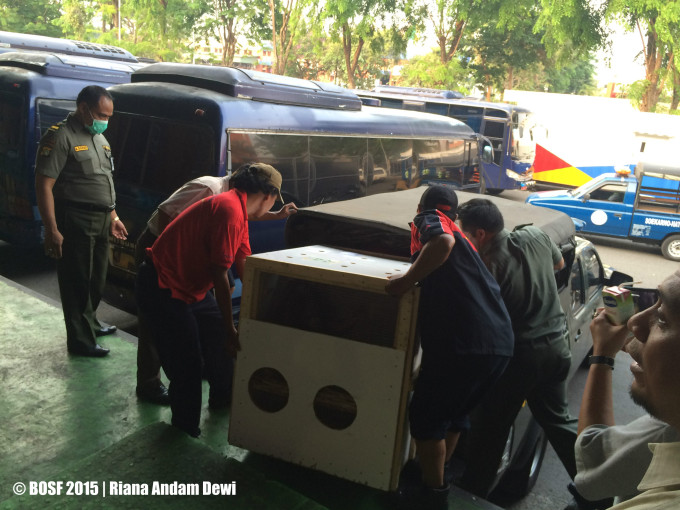 Meanwhile, in early 2015, the Quarantine Agency of the Ministry of Agriculture also succeded in intercepting an attempt to illegally export one young male orangutan at the Soekarno-Hatta international Airport, Tangerang, shortly prior to being transported on a Kuwait Air flight number KU416. This illegal attempt at shipping wild animals from Indonesia to Kuwait is believed to have been conducted by the same network as the current case. The confiscated orangutan from that failed attempt was entrusted to the Center for Animal Rescue (PPS) in Tegal Alur, Jakarta, as evidence. The orangutan, whose name is Junior was to join Moza in Taman Safari Indonesia to also complete his quarantine period. 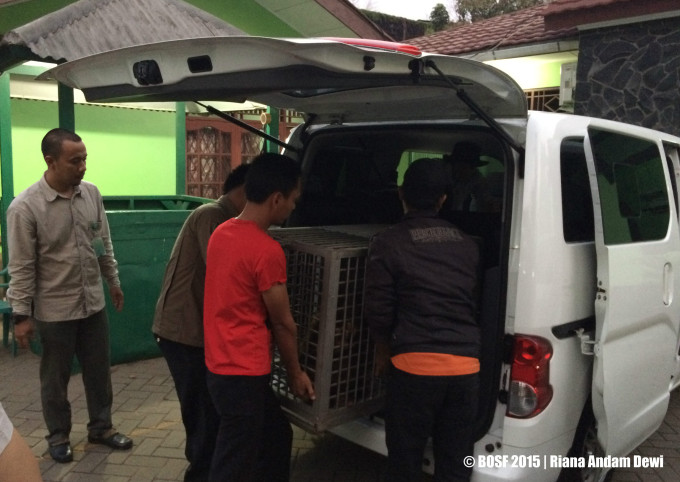 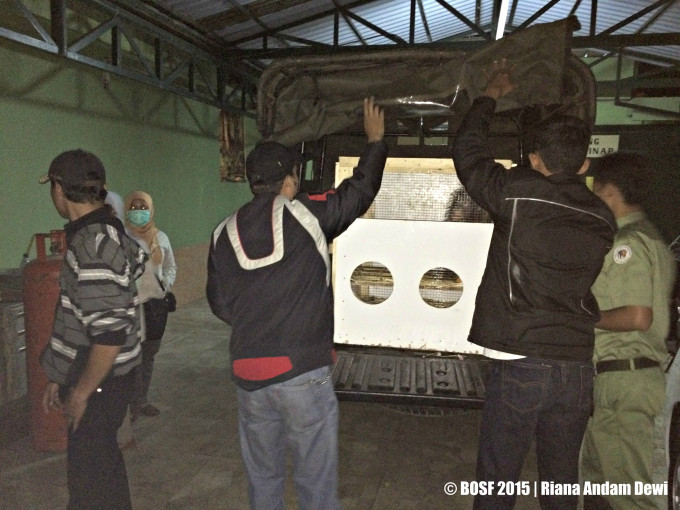 Both orangutan babies commenced a quarantine process consisting a thorough health check – and for Moza, a DNA test – to determine her subspecies and the therefore the most appropriate rehabilitation center to accommodate her. A DNA test for Junior had previously been conducted and revealed his origin as the Bornean sub-species of Pongo pygmaeus wurmbii. The rehabilitation process is deemed highly important for these two to give them the best chance of reintroduction to their natural habitat in the forest in the future.

While in Kuwait, the 6 month old orangutan baby is still awaiting for repatriation. The reason for the additional wait is that she is still too young to travel alone and requires a veterinarian to actively take care of her during the flight. The BOS Foundation together with related parties are currently trying to establish a detailed plan to safely ensure various aspects of animal welfare will be met during her future transport. 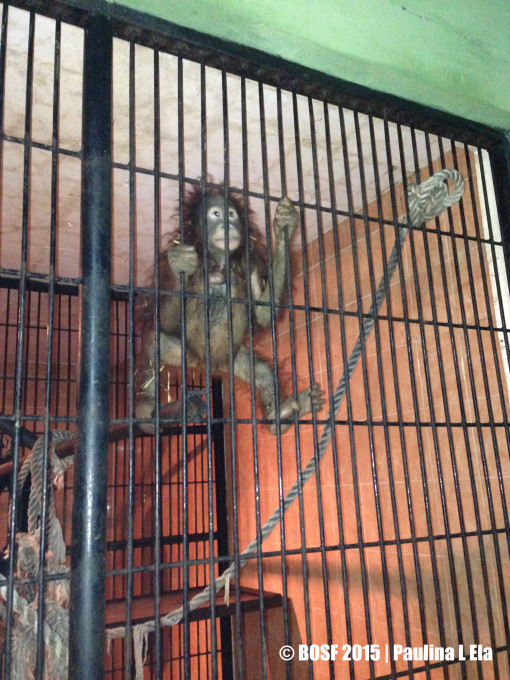 The General Director of Natural Resources and Ecosystem Conservation (Dirjen KSDAE) of the Ministry of Environment and Forestry, Dr Ir Tachrir Fathoni, says, “The Indonesian government is currently collecting data on the number of orangutans in foreign countries to be immediately repatriated. In accordance to international regulations, illegally smuggled wild-born orangutans abroad must return to Indonesia. While Indonesian regulations state that orangutans should be released into their natural habitat in the forest whenever possible. Therefore the Ministry of Environment and Forestry, in this case, the Directorate of Natural Resources and Ecosystem, invited the BOS Foundation to help with the repatriation process of these two orangutans currently being cared for at the Kuwait Zoo and if DNA tests conclude they are Central or Eastern Bornean subspecies, they will be placed in BOS Foundation’s orangutan rehabilitation centers.” 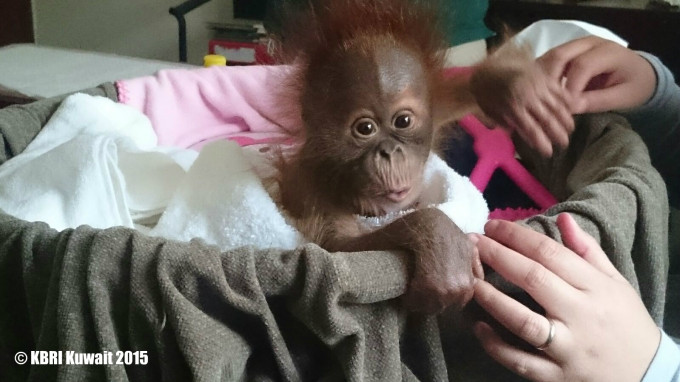 Dr. Jamartin Sihite, BOS Foundation CEO says, “The General Director of KSDAE requested collaboration from the BOS Foundation to repatriate and rehabilitate both orangutans in BOS Foundation’s orangutan rehabilitation centers so both could be reintroduced back to their natural habitat in the forest. We are also actively working with the authorities on a safe transport system for the six-month old orangutan to also be repatriated. Prior to being transferred to our rehabilitation centers, there are certain aspects to cover, among others a thorough health check to ensure all are free from diseases such as TBC, Hepatitis or other transmissable diseases; and to complete DNA tests and genetic analysis to determine the subspecies. If they are in good health and their DNA samples prove that they come from the areas where our rehabilitation centers are located, it certainly is our responsibility and pride to rehabilitate them.”

To anticipate and intercept future attempts of illegal trafficking of protected species, such as orangutans, the government needs to establish cooperation with other countries and create an international monitoring network. Furthermore, appointing dedicated and professional customs officers at international commercial gates such as airports, seaports, and international borders must be immediately addressed.

These orangutan smuggling attempts are sadly not extraordinary cases. Similar cases happen frequently and receive attention from many parties. Orangutans are legally protected by Indonesian Law No. 5/1990 as well as international law. The efforts to conserve orangutans was also carefully detailed in the National Orangutan Conservation Strategy and Action Plan 2007-2017 launched by President Susilo Bambang Yudhoyono, during the Bali International Conference on Climate Change, December 2007. However the success of the orangutan conservation heavily depends on the support and effort from the government and overall community.

The BOS Foundation expects commitment and real action from all stakeholders to protect orangutans. The orangutan is a protected species and an icon of Indonesia’s wildlife. They are an umbrella species which play an instrumental role in forest regeneration. Now is the time for everyone to put more focus on orangutan and habitat conservation. For conserving the forest does not only lead to protecting orangutans from extinction, but also protects important eco-system services which ensures a better life quality for us all.

Founded In 1991, the BOS Foundation is a non-profit Indonesian organization dedicated to conservation of Bornean orangutan and its habitat, working together with local communities, the Ministry of Environment and Forestry of the Republic of Indonesia and international partner organizations.