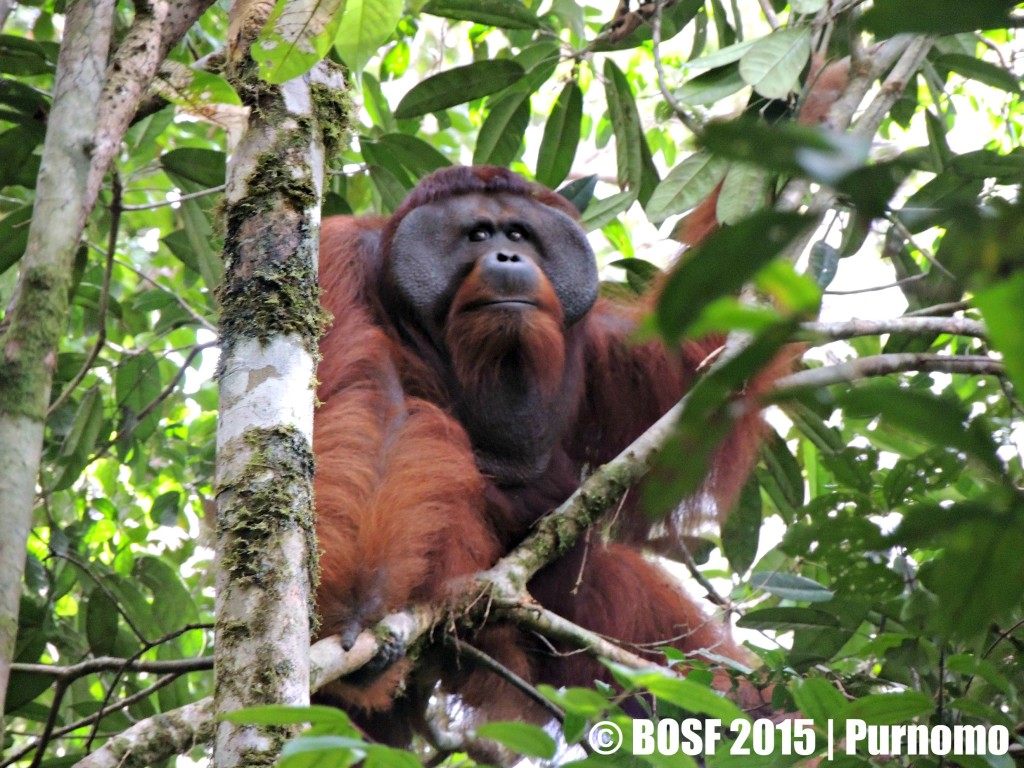 Tarzan — King of the Jungle

On the 28th February, four new orangutans (Mentos, Compost, Dewi, and Jatihan) were released into the wild in the Batikap protected forest area (read the story here). Male orangutan, Jatihan lived in the wild until he was over two years old. Consequently, while the females are curious of humans, sometimes approaching or even chasing us, Jatihan has been weary and kept his distance while being observed since release.

From day one, Mentos and Jatihan seemed to pair up, also sometimes joined by Noor – a female released a year earlier – despite a brief fight between Noor and Mentos just after the latter had left her cage. Jatihan tried his best to get close to the two females, frequently trying to touch and sniff them, but neither would let him mate with them. Jatihan and Mentos stayed around the release area, not straying far from the stony beach over which their cages had been brought to land.

Meanwhile, Dewi and Compost both moved south independently, away from the river. On the orangutans’ second full day in the wild, BOSF Batikap staff Purnomo and Sumarno, observing Dewi, starting hearing distant longcalls around midday. A longcall is an immense, booming series of whooping sounds followed by slow, trembling, low-pitched gargles, produced only by dominant “flanged”males. His massive throat-sac allows the sound to resonate, then the cheekpads or flanges act as a megaphone, intensifying the sound in the desired direction. The call can last several minutes and be heard over a kilometer away, even in dense forest.

Dewi was instantly interested in the sound (females prefer to mate with flanged males over unflanged), and moved towards it. The longcall was heard again, closer this time, and by 13:50 Dewi found the longcaller, Tarzan, who had already been joined by Compost. Tarzan is a fully wild flanged male who was in the first release group three years ago. He had last been seen over a year ago in December 2013. 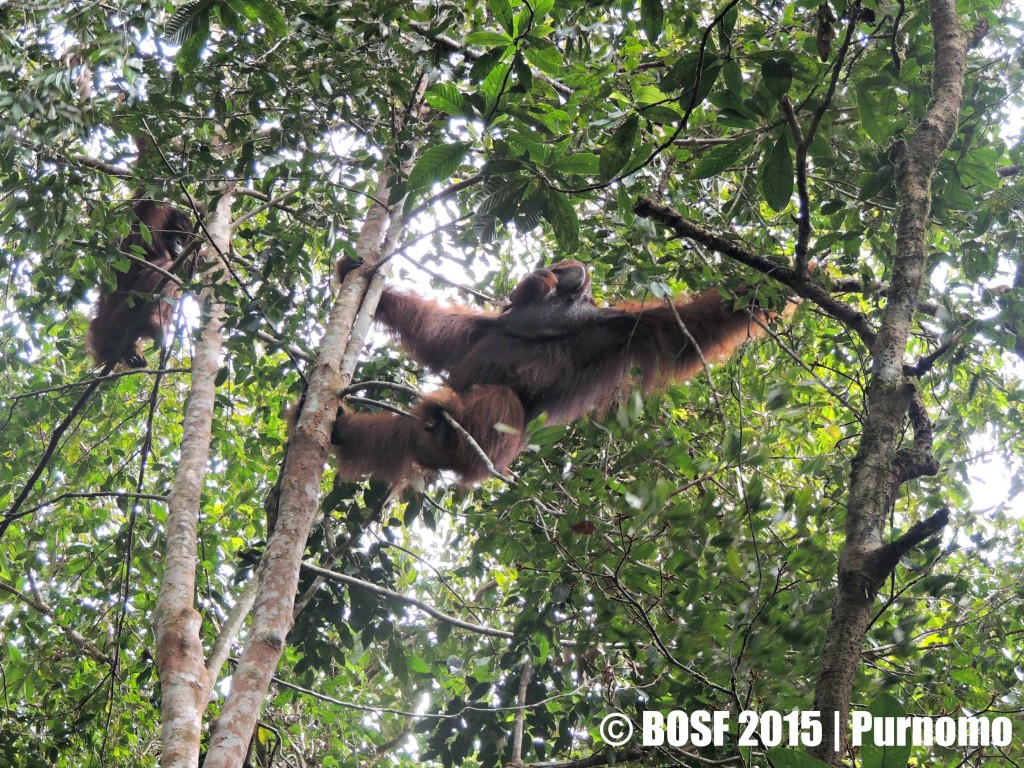 Given his wild background, it is no surprise that Tarzan is thriving at Batikap – he is absolutely huge, fatter than ever, and quite an intimidating sight. The females followed him for the rest of the day, and Dewi mated with him twice. During the bouts of copulation, Compost got angry, kiss-squeaking constantly in irritation. Perhaps she was jealous.

The next day they were followed again, and this time it was Compost that was observed mating with Tarzan, not in the trees this time but on the ground. Now it was Dewi’s turn to get jealous; she approached the two in the middle of the act and tried to intervene, only to be pushed away with a single swipe of Tarzan’s enormous arm. Perhaps attracted by the regular longcalls, Noor also turned up in the afternoon. However, when Tarzan tried to approach her, she moved away. The other two followed him closely all day, only switching tree when he did.

While Compost moved away on her own in the following days, Dewi did not leave Tarzan’s side. On the 5th of March they mated three times, always straight after an impressive longcall from Tarzan, and later on in the day she tried to initiate more mating but he was too tired.

After observing each new orangutan every day for a week following their release, we were satisfied they were healthy and feeding regularly and so left them to it for a while. During follow-up monitoring two weeks later, Tarzan was still associating with Dewi, now being followed by Mentos as well. Compost was found two days later, not far from the trio. Jatihan, on the other hand, was neither seen nor his radio signal picked up in the area after several searches. This is not too surprising since, as a small flanged male, the frequent booming longcalls are a sign that he is not welcome there. He will be safer keeping his distance from Tarzan; we will do our best in the coming weeks to find out where he has decided to do this.

Learn more about the release program. Please support the BOS Nyaru Menteng release program by making a tax-deductible donation today! All donations made from this button will be earmarked for the BOS orangutan releases.