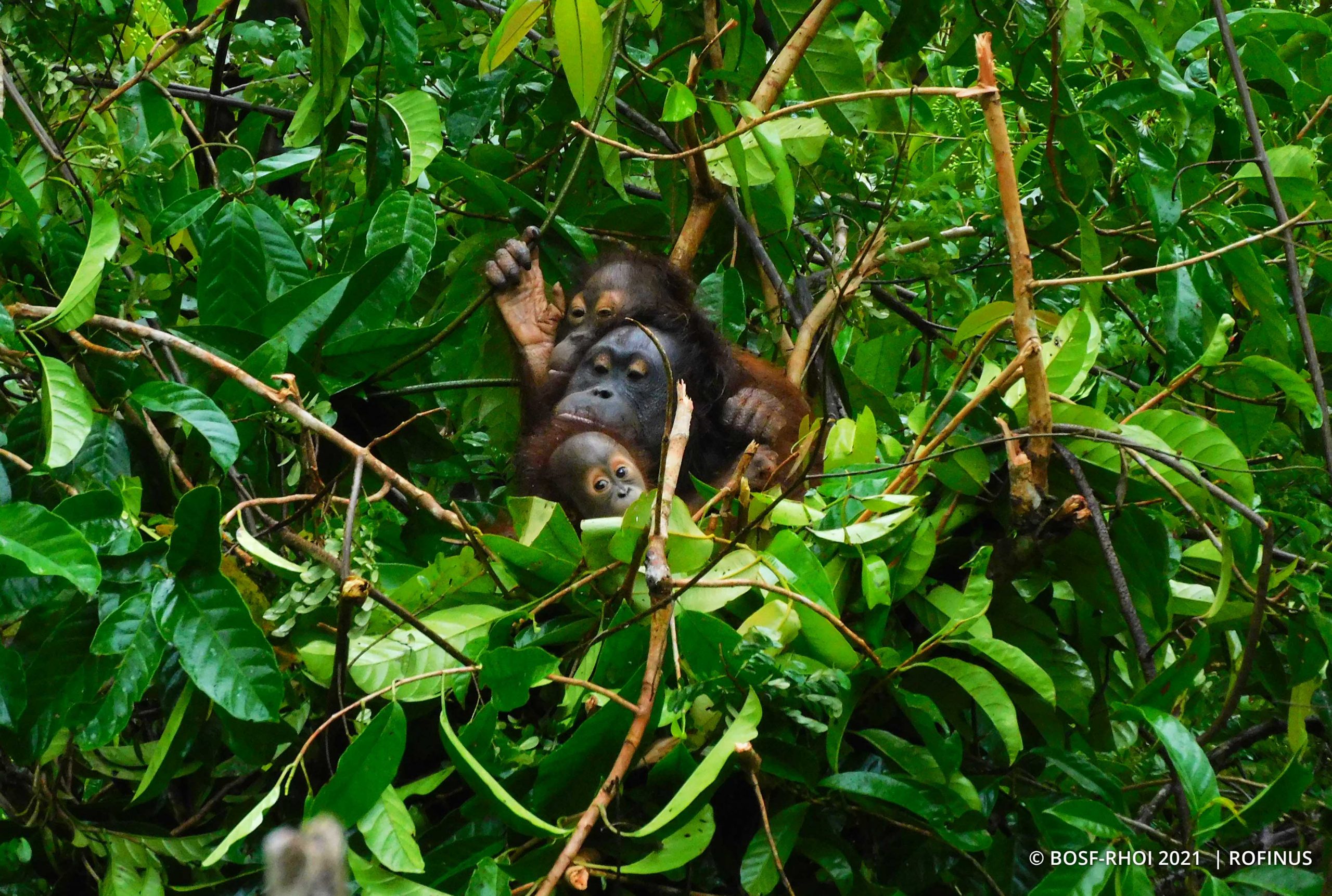 MAY 24, 2021 — In early April, our Post-Release Monitoring (PRM) team from Nles Mamse Camp, in the Kehje Sewen Forest, East Kalimantan, spotted three orangutans building nests only a few minutes’ hike from camp. They were identified as Signe, an adult female orangutan; her male baby, who is less than 12 months old; and Bungaran, her first-born. Signe had given birth to her first son when she was still housed at the Samboja Lestari Orangutan Rehabilitation Centre in East Kalimantan, but was released together with Bungaran when he was 12 months old, at the end of 2016.

The morning after spotting the three orangutans, Kris and Yunus, two of our PRM team members, conducted nest-to-nest observations on Signe. Meanwhile, PRM team members Syahrul and Denny observed Bungaran. Nest-to-nest observations start from the moment an orangutan moves out of their nest in the morning, and only end once they enter their evening nest. It was just before 6 a.m. when the team arrived at the nest site and, not long after, there was movement from both Signe’s and Bungaran’s nests. The team began to collect data on all the activities that Signe and her offspring would conduct that day.

After emerging from her nest, Signe quickly moved to another tree. During observations, she dangled on branches, moved through the canopy, breastfed her baby, took time to relax, and, at one point, even climbed down to the ground. The team observed Signe eating a healthy combination of natural foods: liana fibres and young leaves, forest oranges, young fig leaves, termites, forest ginger, and Calamus sp. tuber. On average, Signe breastfed her baby every half hour. The male baby, whom we have yet to name, looked healthy and showed great interest in his mother’s activities. When Signe ate, he watched with extra attention. However, he didn’t get to taste test any of her food, as he is still too young to eat many of the foods that the forest has to offer.

Bungaran also spent most of his time up in the trees, eating. Just like his mother, he too consumed a variety of natural foods, including termites, Calamus sp. tuber, liana fibres and leaves, and forest ginger. Above all the others, however, Bungaran ate mostly mahang fruit (Macaranga sp.), and our team pondered over whether this might be his favourite forest food. Bungaran appeared completely indifferent to his human observers as he did not approach them nor exhibit any signs of distress. 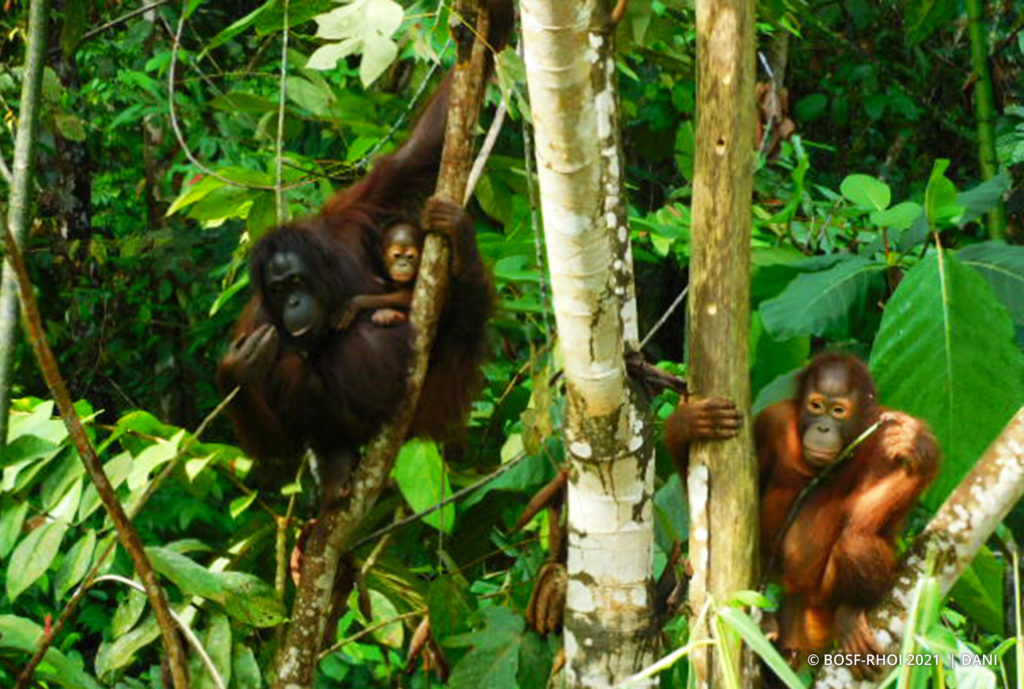 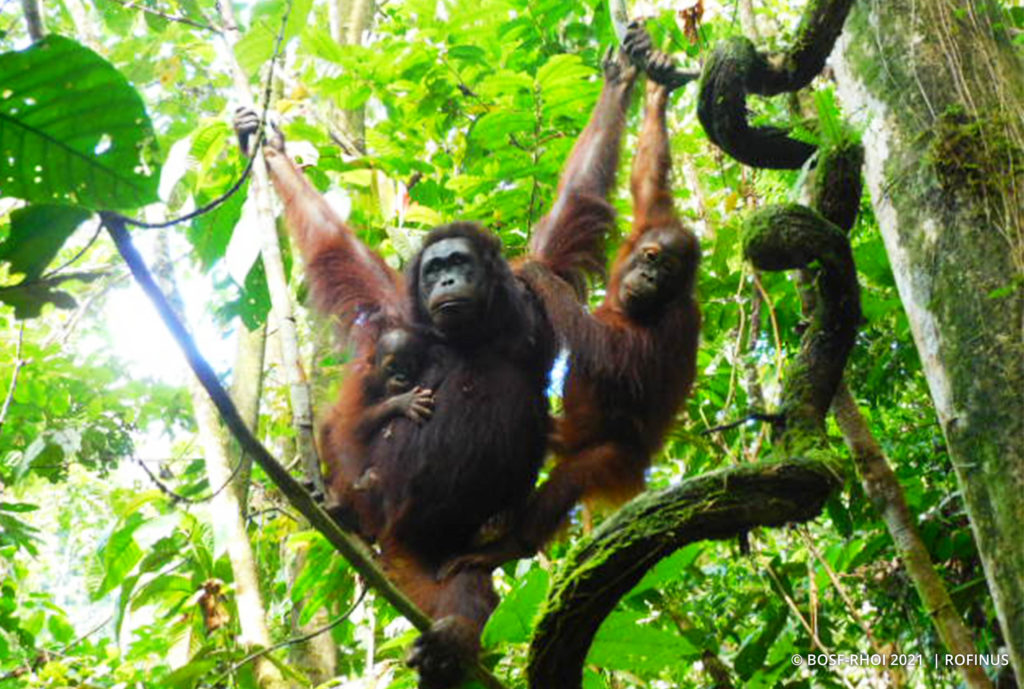 Just before sunset, Signe began to build a nest in a mahang tree, then rested in it with her baby. Bungaran soon joined the two in a nearby nest. Our PRM team members sat and waited for a while to ensure that the three had settled for the night, before finally returning to camp.

The PRM team decided to repeat observations on Signe and Bungaran the following day. As with the previous day, Signe and Bungaran kicked off their daily activities shortly after 6 a.m. and stuck to a similar routine. Again, both were observed consuming a wide variety of forest foods, including young leaves and liana fibres, rattan tubers, and several other plants.

The most interesting observation our team members made was Signe’s acceptance of Bungaran’s presence. As a mother caring for young offspring, it would be quite natural if Signe had tried to shoo Bungaran away, so she could focus on her baby. However, on several occasions over the two days, Signe allowed Bungaran to get close to his younger brother. Last year, when we first spotted Signe’s newborn, Bungaran was nowhere to be seen: Thus, this was the first time our team was able to witness interaction between the two brothers.

The team concluded the second day of observations on a positive note, with the knowledge that Signe and her two offspring – Bungaran, who is now around six years old, and his baby brother – are thriving in the Kehje Sewen Forest. While Bungaran is still learning how to live independently, it appears he is still benefiting from – and enjoying – occasional proximity with his mother, who is now raising her second infant. However, we sincerely hope Bungaran will be showing even more signs of independence the next time he is observed in the forest.

We wish all three a healthy and happy life in the Kehje Sewen Forest!