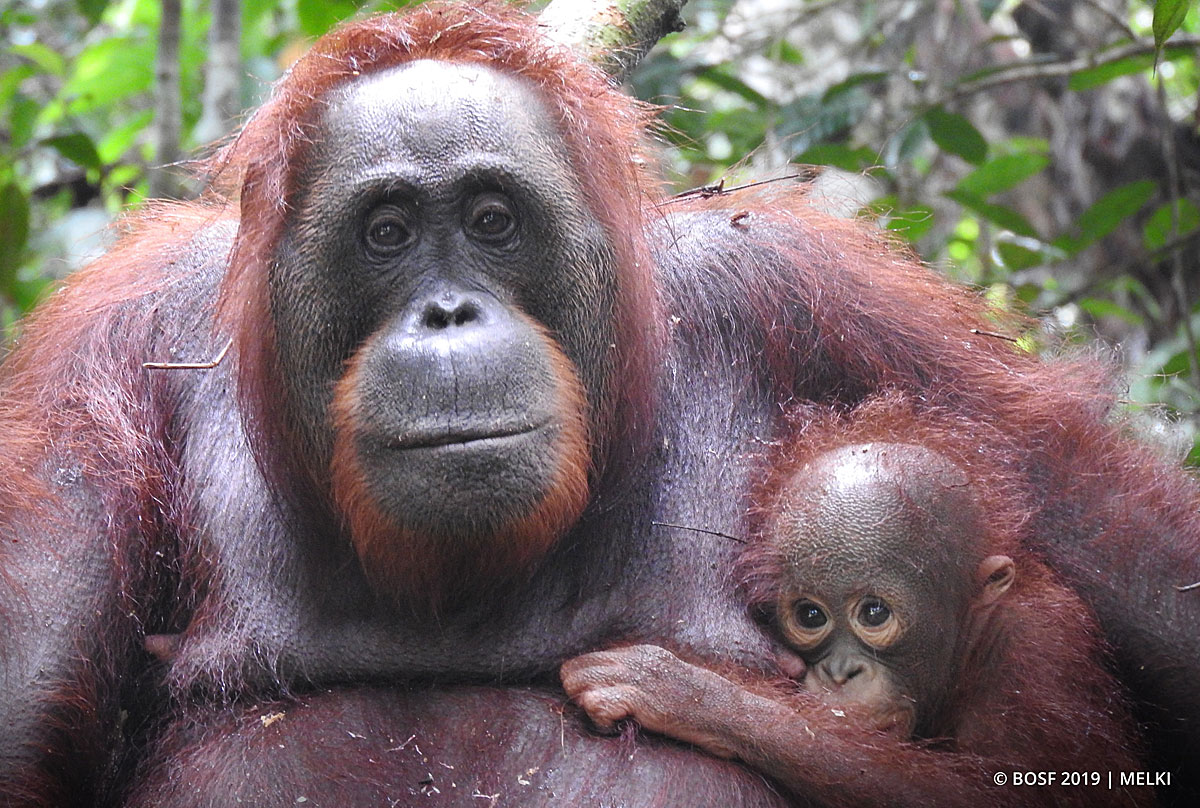 September 30, 2019 — Since 2012, numerous births have been recorded among released orangutans in the Bukit Batikap Protection Forest, one of the release sites we utilize to accommodate rehabilitated orangutans, in the Murung Raya Regency of Central Kalimantan. In 2018, this number grew exponentially, starting first with the birth of baby Eden in February. The number continued to rise as mothers Meklies, Olivia, and Manisha, all gave birth in the following months, and today we have recorded a total of 13 wild-born babies in the Bukit Batikap Forest.

Members of our Post-Release Monitoring (PRM) team from Totat Jalu Camp try their best to locate and observe these mothers and their babies during routine patrols. This, however, is no simple task, as these orangutan mothers have been living in the forest for years, and their transmitter batteries have long been depleted. This leaves the PRM teams with only one choice, to rely on their manual tracking skills to locate the orangutan mothers.

Recently, one of our PRM teams managed to locate Manisha and her son. Manisha was released in the Bukit Batikap Forest in 2014, and four years following her release gave birth to a baby boy, we later named Meteor, in August 2018. 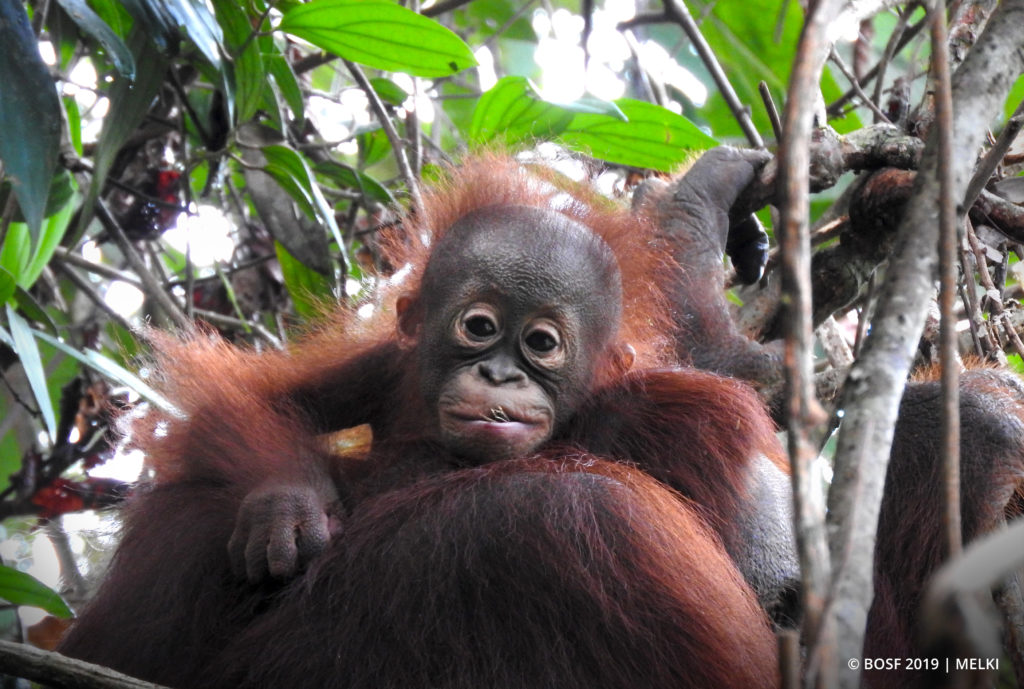 Both mother and baby appeared healthy, with Manisha savouring natural foods in the canopy and occasionally breastfeeding her baby, who clung to her. She allowed her baby to climb and navigate tree branches under her watch, and at times stretched out her arm or leg for her son to climb upon. Small yet significant moments like this are observation gold! 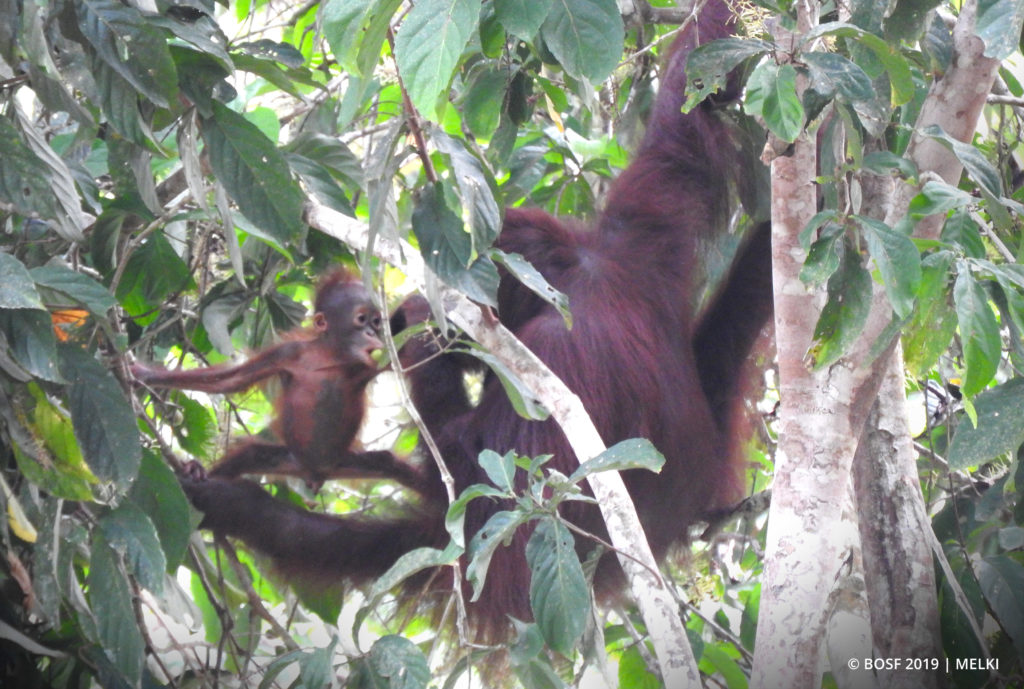 Manisha stretches her leg out for her son to climb up

We were amazed to see the progress that Manisha’s little boy had made. At one point during observations, he was testing his climbing skills, but suddenly the small branch he was holding onto broke. Fortunately, his other arm was holding the part of the branch still attached to the tree. Mother Manisha was quick to come to his rescue. Responding to her baby’s cries of distress, Manisha held him tightly to her chest and quickly eased his fears. Shortly afterward, the baby bravely left his mother’s embrace yet again to climb and dangle from another branch.

Our PRM team observed that Manisha has started to show her son how to forage for delicious forest foods. She even offers him the occasional soft fruit to suck on. Her baby might not be able to chew just yet, but he really seems to enjoy tasting the selection his mother offers! 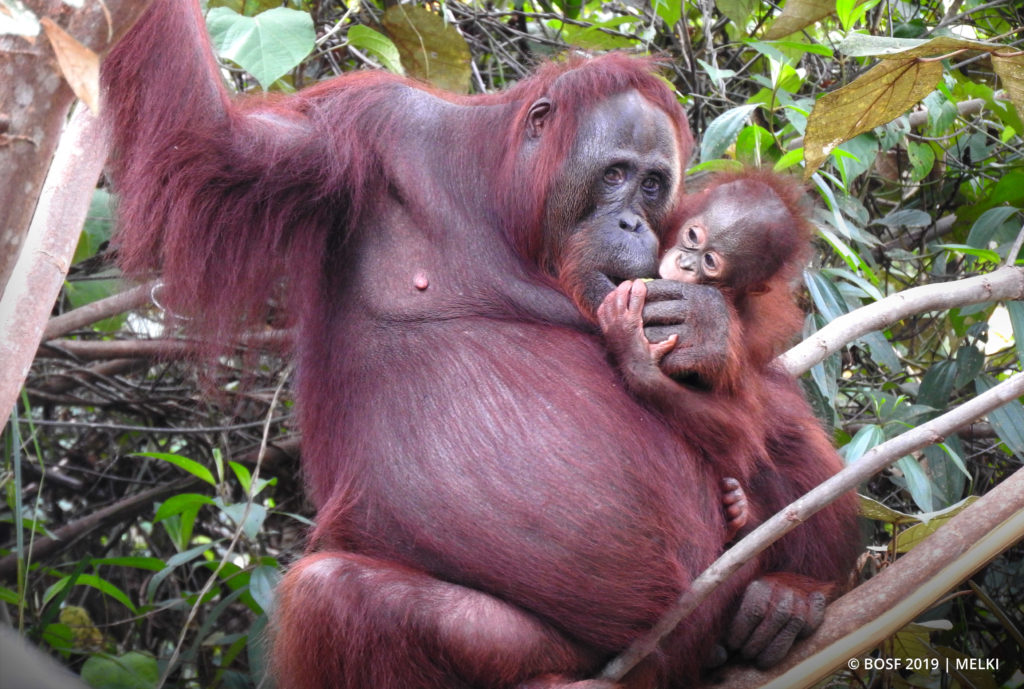 Manisha teaches her son to forage

Based on our observations, it is clear that Manisha is fulfilling her role as a wonderful orangutan mother. Even though she was separated from her own mother when she was just a baby, Manisha has surprisingly strong maternal instincts. From the very first time she was observed post-birth, it was evident that she knew how to care for her baby. She hugged her son at all times, and would constantly check to make sure he was clinging tightly to her before moving through the trees.

Now that her son is growing bigger, it is time for Manisha to teach him the forest skills he will need to survive in the wild. Most would agree, “a child’s best teacher is its mother” – a saying Manisha is undeniably living up to!