News from IAR Ketapang: The Adult Orangutans Are On The Move 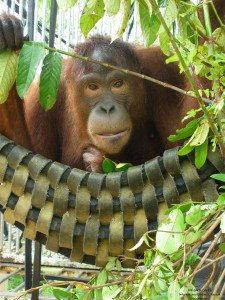 Mely chilling out in her hammock before the big move. She knows something's going on...

July 2013 - IAR Ketapang has been a hive of activity in the last few weeks in preparation for the big orangutan move. This past week four of the largest female orangutans-- Mona, Huta, Meli and Cinta-- were moved from their housing at the transit center in Ketapang City to the new IAR rehabilitation site in Sungai Awan.

This is a considerable change for the girls since they have been housed at the Transit center in Ketapang for several years. With the construction of the Sungai Awan Rehabilitation Center well underway, the orangutans are being moved in stages from their old housing to the new forested rehabilitation site. Now that most of the babies and toddlers have already been moved, it's time to start moving the larger, older orangutans.

Orangutans are known for their strength and ingenuity. They are the escape artist of the great apes, so special care needs to go into their enclosure preparation to ensure the areas are as orangutan-proof as possible. The cages at the Transit Center have also been deteriorating with age, leaving the staff with the daunting task of trying to weld away rust as fast as the tropical rain creates it. Thankfully when handyman Dade comes to repair cages with his welding gear, he becomes great enrichment for the orangutans to watch (and learn?). 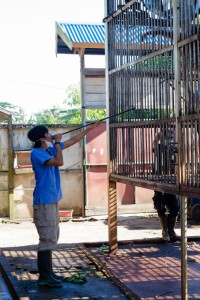 The first step to their freedom was to move the four girls into the Quarantine enclosure in Sungai Awan, which requires a general anesthetic and a truck ride to their new rehabilitation site, which is located about half an hour outside of Ketapang. The quarantine enclosures at Sungai Awan have been refreshed with plenty of new enrichment and a fresh coat of paint thanks to the Great Project volunteers. There are also shiny new locks in place that should keep Mona, one of our craftiest females, at bay.

When selecting which group of the large orangutans should be the first to move from transit, Mona's group was at the top of the list. Several years ago the artful Mona was the mastermind behind an escape from her cage in which she and three of her cage mates were able to successfully raid the food room... and as we all know, orangutans have very good memories.

Clever Mona was first up to get the anesthetic as she can be the most suspicious of unusual events. She was anesthetized by blow dart, while Cinta, Huta and Meli were very accommodating and accepted hand injections of anesthesia through the bars. The girls were thankfully very co-operative, gently going to sleep, giving the team plenty of them to get them out of their cages. 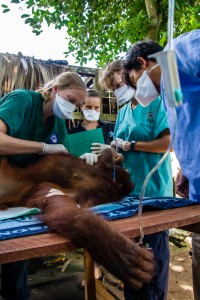 Each orangutan received a full medical examination while anesthetized.

Anesthetics provided a golden opportunity for the vet team to get close enough to each of the girls to give them a full physical exam and collect any samples needed for health and genetics. The team of veterinary staff and animal caretakers worked like a synchronized sports team to get all the procedures done efficiently in a minimal amount of time. This is no mean feat considering it involved collecting blood samples, tracheal washes, hair samples, dental records, and growth measurements while giving a full general physical exam, taking x-rays and maintaining a smooth anesthesia, all within half an hour.

After this flurry of activity the girls woke up from their unusual sleep on piles of leaves in their transport cages. The crates were then loaded onto the back of flatbed trucks and the girls were able to watch people driving alongside, as the they drove out of the town and into the rural area of the Sungai Awan Center. They all sat watching intently with their fingers laced through the bars. Cinta even moved the leaves away to ensure she could get a better view. The only hitch was a light shower of rain on the last ride back to the center, which was quite amusing for Cinta and Meli as they got to watch from their dry cages as the people and equipment around them got soaking wet. 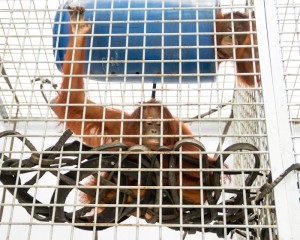 On arrival the girls all moved from their crates straight into their new cage and made themselves comfortable swinging in the new hammocks and bails. Within no time Mona was testing out every inch of the cage to exploit any weaknesses in the handiwork. It will take a little while for them to adjust to the new surroundings so the team is providing lots of food, branches and enrichment to help settle them in.

The day after being moved Mona took advantage of her new settings and used her keen sense of timing to steal a cup of electrolytes off one of the new vets, but, rather than destroy the cup, she rested herself against the cage door and lazily used the cup of liquid to dunk her biscuits in. So she seems to be settling in nicely so far.

Special thanks to veterinarian Micah Jensen for the story and Thomas Burns for the photos.
All photos © IAR. Please do not use without written permission.

Please support IAR Ketapang by making a donation or adopting an orangutan.