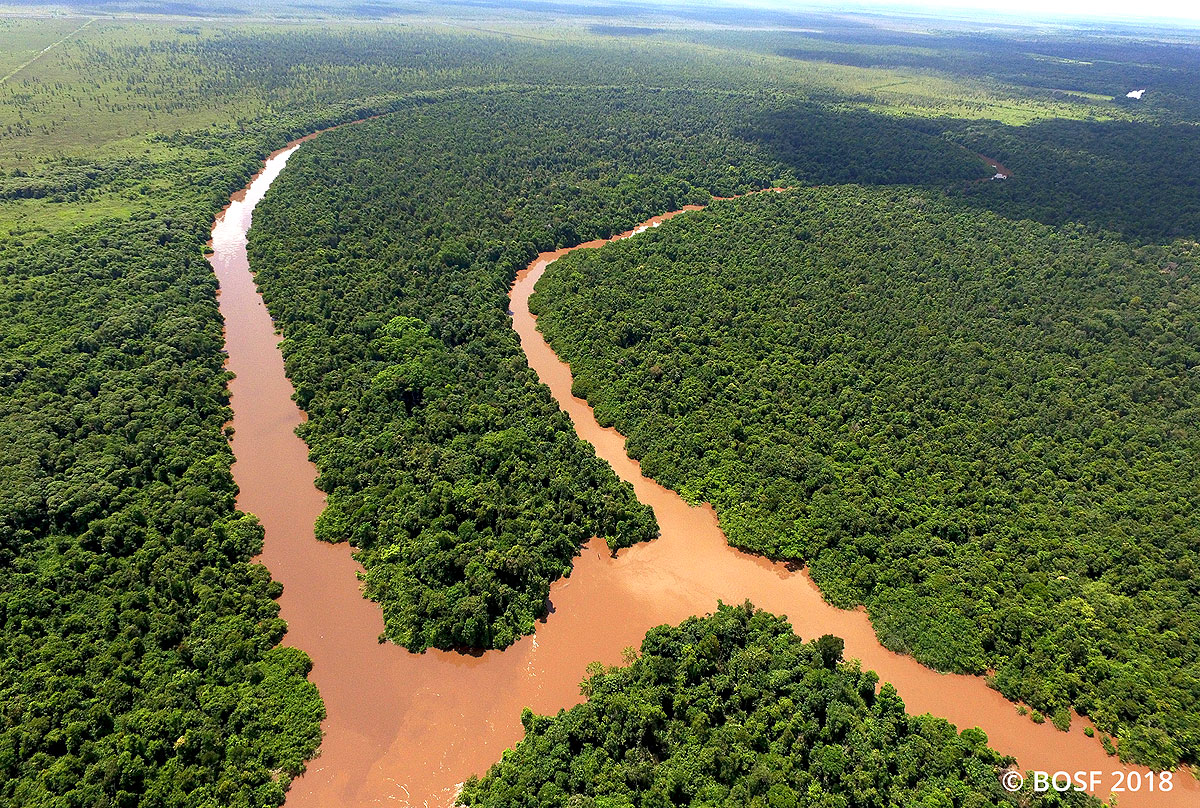 Pulang Pisau, November 5, 2018: Rehabilitated orangutans must meet certain criteria before they can be reintroduced to the wild: They must be of suitable age, be in good health, possess the appropriate survival skills, and exhibit natural, wild behaviours. At the BOS Foundation’s Nyaru Menteng Orangutan Rehabilitation Centre, there are a number of orangutans who, despite being of suitable age and in good health, lack the skills and behaviours required to be released to the wild. The under-development in these orangutans, who are categorised as ‘unreleasables’, is the direct result of being kept in captivity for too long. However, this does not mean these orangutans are destined for a life behind bars; the BOS Foundation has helped secure a better future for them by working in cooperation with a number of stakeholders to prepare Badak Kecil Island as a special, orangutan sanctuary island with natural forest vegetation for ‘unreleasable’ orangutans.

Badak Kecil Island Orangutan Sanctuary was officially opened, immediately followed by the transfer of six ‘unreleasable’ orangutans to the new sanctuary. By Law, the Government of the Republic of Indonesia should ensure that all protected wildlife can live freely and prosperously in their respective habitats. Badak Kecil Island Orangutan Sanctuary is a haven for orangutans that was carefully prepared through cooperation between the BOS Foundation, the Indonesian Government, and PT. Sawit Sumber Mas Sarana (SSMS) Tbk., with support from BOS Foundation’s international partner organisations and WAP. Being ‘unreleasable’ does not mean that we should give up on these orangutans. On the contrary, we should be locating safe environments for them to thrive in.

Badak Kecil Island is a 104-hectare, forest-covered island in the Salat Nusa Island cluster, which covers a total area of ​​2,089 hectares. It is jointly managed by the BOS Foundation and PT. SSMS, with the aim of creating semi-natural island facilities for the final stage of the orangutan rehabilitation process (pre-release islands), and creating a sanctuary for orangutans that cannot be released to the wild. The area chosen has a large carrying capacity and well-maintained vegetation; is isolated by river waterways throughout the year; does not have an existing wild orangutan population; and can facilitate orangutan adaptation and socialisation.

Vallauthan Subraminam, President Director of PT. Sawit Sumbermas Sarana Tbk., added; “Through this collaboration, the BOS Foundation has implemented best practices in terms of orangutan rehabilitation and sanctuary management. Meanwhile, PT. SSMS has the role of providing thousands of hectares of land and infrastructure for conservation activities, including platforms, buildings, and canals to separate the islands.”

Dr. Ir. Jamartin Sihite, MSc., CEO of the BOS Foundation said; “We have been planning to use Badak Kecil Island as a sanctuary for unreleasable orangutans since 2016, and now we will finally get to see the first group of unreleasables moved there.

We are delighted that these orangutans will get the chance to enjoy life on Badak Kecil Island Orangutan Sanctuary, but we must stress that we still need more sanctuary facilities, we still need more release sites, and we need increased commitment and the participation of all stakeholders to better protect our forests to prevent orangutans from being driven away from their natural habitats in the first place.”

The six orangutans to be released in the first transfer to this sanctuary island include Moncos (a 20-year-old male), Yasmine (female, 23), Manis (female, 22), Caesar (male, 28), Mama Lasa (female, 26), and Pepsi (female, 21). All six will be protected, observed, and supplemented with food by our team of BOS Foundation technicians for the rest of their lives.

The establishment of the Badak Kecil Island Orangutan Sanctuary has created economic opportunities for local communities who are providing the transportation services for the orangutan food and water, and managing the accommodation facilities (provided by PT. SSMS) for staff and visitors coming to the sanctuary and the surrounding islands in the Salat Nusa island cluster.