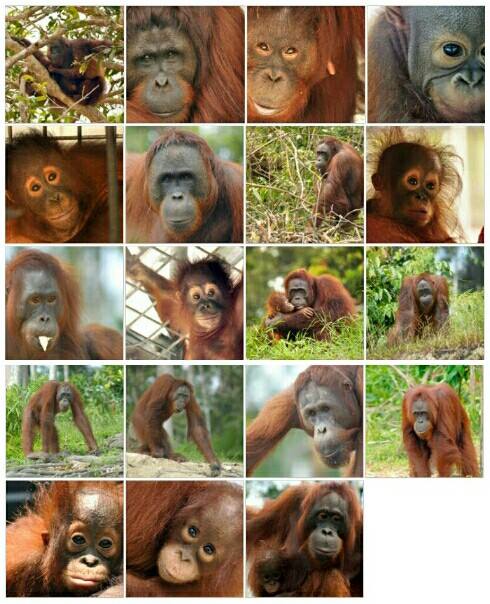 Nyaru Menteng, Central Kalimantan, Indonesian Borneo - February 7, 2014. On February 7 and 8, 2014, 20 rehabilitated orangutans depart from the BOS Foundation Central Kalimantan Orangutan Reintroduction Program in Nyaru Menteng towards pre-designated release points in the Bukit Batikap Conservation Forest. This group consists of 13 female and seven male orangutans including six mother-infant units.  Five of the orangutans to be released Jupiter, Mercury, Reno, Hamlet, and Manisha, were the stars of the Orangutan Island series produced by NHNZ and premiered on Animal Planet. The detailed profiles of all the orangutans being released can be seen in the attached Orangutan Release Candidate Profiles.

The 20 orangutans fly from Tjilik Riwut airport in Palangka Raya to Beringin airport in Muara Teweh. From Muara Teweh, they will be transported by a helicopter to the Bukit Batikap Conservation Forest. Due to the number of orangutans, they are divided into two groups. 11 orangutans are flying on the first day, and the rest will fly on the second day.

Denny Kurniawan, Program Manager of the BOS Foundation Central Kalimantan Orangutan Reintroduction program in Nyaru Menteng stated, “The Indonesian Government must act assertively in protecting orangutan habitat. To achieve the target of orangutan reintroduction, the BOS Foundation will continue our work and efforts to return the orangutans to their natural habitat. However, soon, the carrying capacity of Bukit Batikap Conservation Forest will reach its maximum limit and we will need to find another safe and suitable forest. If the Government can’t enforce the law to protect orangutan habitat, the targets stated in the Indonesian Orangutan Conservation Action Plan will not be realized.”

Meanwhile, to reduce the number of incoming orphaned or displaced orangutans into rehabilitation centers, which will significantly help achieve the Action Plan target, the Conservation and Natural Resources Authority (BKSDA) is making efforts to minimize the conflict between orangutans and humans. According to the Head of Central Kalimantan BKSDA, Ir. Hariyadi, “Private Companies that exploit the forest area in their business endeavors must contribute to orangutan conservation efforts by cooperating with BKSDA. At the moment, there are four oil palm companies in Central Kalimantan (16 companies) which have initiated a cooperation agreement with BKSDA. One of the means is by establishing an Orangutan Rescue Force with the purpose to prevent conflict between humans and orangutans in plantation areas. I believe we can reduce the incoming numbers of orangutans into the rehabilitation centers to meet the target of the Orangutan Conservation Action Plan 2007 – 2017.”

Dr. Jamartin Sihite, the CEO of the BOS Foundation stated, “By observing the loss to environmental disasters lately, we can conclude that orangutans are our solution. To preserve orangutans and their habitat is just as important as preserving our lives. Orangutans are an umbrella species which play an important and significant role in forest regeneration, and humans are reliant on the forest as the source of oxygen, clean and fresh water, and flood and erosion barrier. For those reasons alone, it is important that more and more people are aware of the importance of forest preservation.”

As an addition to the support from the government, this release event, as always, is also supported by the community of Murung Raya, individual donors, partner organizations, and all concerned conservation organizations all over the world. The BOS Foundation would like to convey its gratitude to BHP Billiton for the financial and logistical support given to undertake this event. The BOS Foundation would also like to reach out to the business community to fulfill their environmental responsibilities to ensure the nature conservation and preservation in Indonesia.