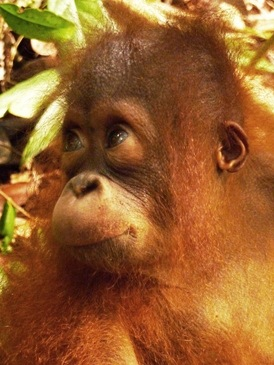 April 2011 -- It is with a heavy heart that I report this tragic news from Sintang, but I feel it is important that all our donors, supporters and friends be made aware of a terrible event that recently occurred at the Sintang Orangutan Center.

Late last week I received a phone call from Willie Smits informing me that Luna, the smallest orangutan baby at the center, had "gone missing". What we were told was that the caregivers at the center had brought the orangutans out to Forest School in the morning, just like they do every day, but when they returned in the afternoon, Luna was not with them. She had disappeared in the forest....

We were told that police and army officials were involved in the search. I felt, however, that we needed to do more, so I immediately called into action our partners from the O Team: JAAN & COP (Jakarta Animal Aid Network & the Center for Orangutan Prevention) and together we decided to send a team of people to the area to search for Luna.

Groups of local volunteers were called up to find her, and the teams have now spent a week making regular sweeps of the local forest area where Luna was last seen. They have been working tirelessly to find any information related to Luna's disappearance. They brought in hunting dogs from a Dayak village to take into the forest to track her scent.  The dogs were able to follow her scent from the forest out to the road where the scent disappeared...

The team has also been searching the surrounding neighborhood for any clues as to Luna's whereabouts or any discoveries that may lead to information about what happened. They have gone door to door to talk to the local people to see if anyone has any information about Luna. They have put up signs and talked to local business. Rewards have been offered for any information leading to Luna. There was a public announcement on the local radio stations. A local school teacher claimed to have seen a small orangutan eating fruit by the side of the road on the morning of the 9th, but this information has not been independently confirmed. There have been new leads every day, along with many far-fetched stories and dark rumors. Lots of speculation, but nothing concrete.

Fearing the worst, the O Team is also gathering information about know local smugglers and wildlife traffickers. They have also independently questioned everyone working at the orangutan center in order to get a clear time line of the activities on the morning of Luna's disappearance and to find out who was in the area and who might have information as to what happened.

At this point we cannot rule out the possibility that Luna's disappearance could be the result of foul play. She may very well have been captured by wildlife smugglers and sold. She may even have been smuggled out of Indonesia by now. The awful truth is that the illegal pet trade is still very much alive in that part of the world, and a baby orangutan is tremendously valuable to someone living in desperate poverty.

We at Orangutan Outreach are ruling NOTHING out as we continue to investigate. While we still remain hopeful that Luna is alive and might even still be in the forest, with every passing day this becomes more doubtful. O Team members have been stationed permanently at the Sintang center to guard the area and make sure the other orangutans remain safe and secure. Orangutan Outreach and our O Team partners will take all necessary measures to ensure the safety of the orangutans in Sintang. They have already been through enough. We will not allow them to suffer any more. What has happened to Luna is a wake-up call.

We know this information will stir up many questions and right now we are doing everything we can to get answers and focus on finding Luna. We are thankful to our dedicated O Team partners, COP and JAAN. They are doing everything possible to search for Luna. They are true orangutan champions. It is an honor to count them as our friends.

We know all of you will send good thoughts into the world for Luna. We also know you will be as angry, as sad, as disappointed, as heartbroken and as confused as we are. We thank you for your prayers that this innocent little orangutan will be returned to us safely.

We will post more news as it becomes available. Thank you for your patience.

We cannot lose hope for Luna and her fellow orangutans. Thank you for your continued love and support in these difficult times.