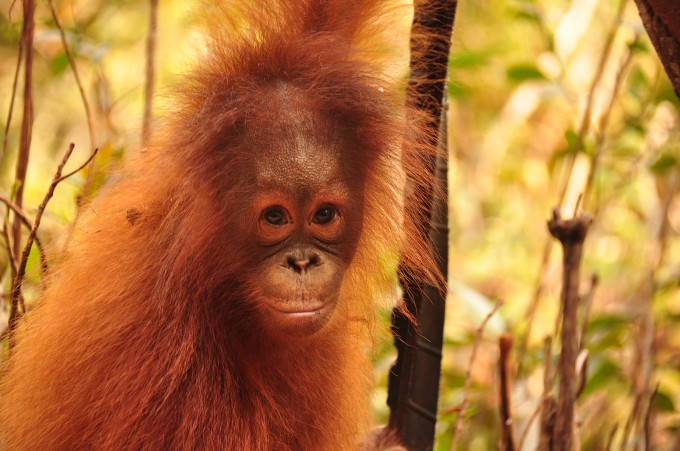 Little Cinta has gained a lot of confidence since an older, larger orangutan named Barlian moved up to the first grade of Forest School. Many orangutans were nervous around Barlian because she was so naughty and aggressive. Most of them tried to avoid her, including Cinta and her best friend Jumbo. The truth is Barlian didn't mean to scare Cinta, but sometimes she did come across as a bit of a bully. Sometimes when Cinta was walking in front of her, Barlian would grab her foot causing her to cry and squeak. Barlian was just playing, though, and no doubt she's now on the receiving end of the playing from the older, larger orangutans in Forest School!

Now that Barlian has moved up to the Forest School, Cinta can play and enjoy the nursery area fearlessly. She and Jumbo are still close, but Cinta has become a bit more independent and doesn't mind playing alone. Jumbo, too, often spends brief periods of time exploring the trees by himself.

Cinta is now more active than ever. She likes climbing ehang trees and hanging on the ropes that the babysitters set up for daily enrichment. She often prefers to play alone, rather than in a group— which is quite normal for young orangutans as they learn to explore the world.

Cinta, who used to be a bit gloomy, has transformed into a cheerful orangutan who is very active and brave— clearly a result of not having to deal with Barlian's bullying. This definitely makes the babysitters happy as she is less dependent on them to protect her from Barlian.

Cinta is happiest when the babysitters gives her some ehang twigs. She loves playing with them, biting them and trying to chew on them. In the afternoon, the babysitters help her arrange the twigs and leaves in her sleeping basket to practice her nest-building skills. Cinta hasn't quite gotten the hang of it, but she's trying! The fact that having a pile of leaves and twigs in her sleeping basket makes her happy is a good thing! Warm and cozy, she falls asleep with Jumbo curled up in the basket beside her...