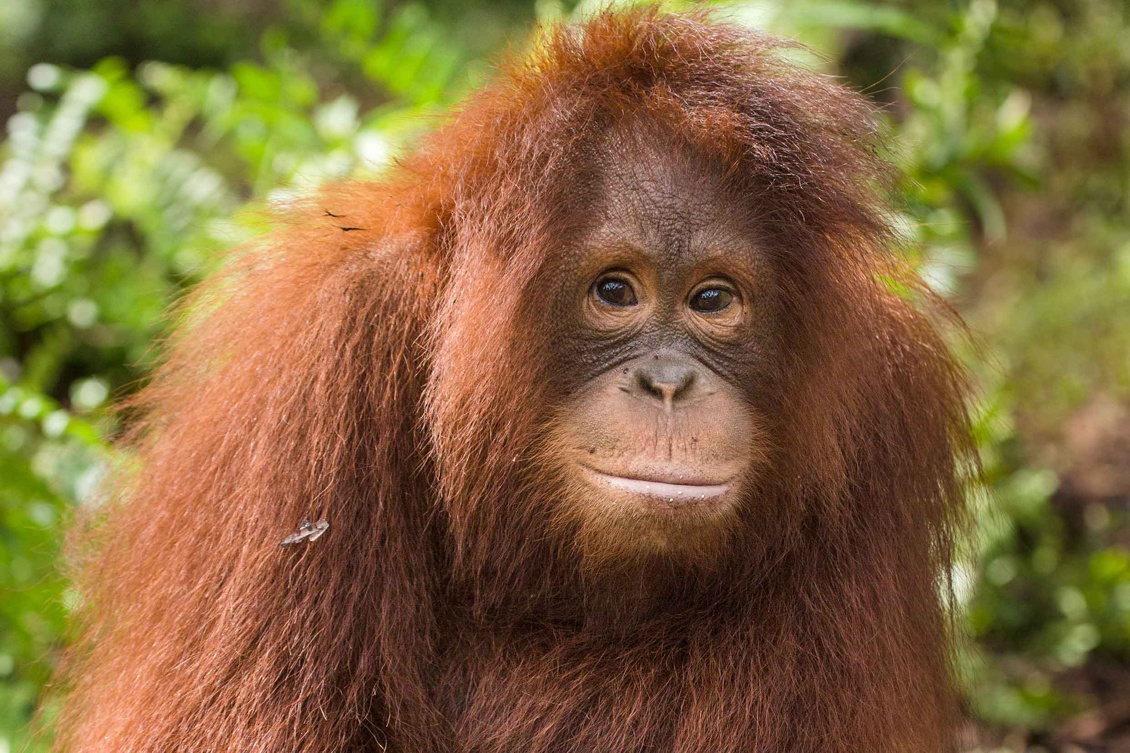 Cinta is still a member of Nyaru Menteng’s Forest School Group 5. She enjoys annoying her peers and babysitters and will always find ways to taunt them, like throwing twigs in their direction from behind the bushes, or suddenly crouching down in the path of a babysitter and blocking them from moving forward. One really needs to be careful and watch their step around Cinta!

Nothing seems to deter Cinta from acting up. She is just too quick for anyone to stop! She also has a special hiding place, safe from the babysitters: high up in the trees. Cinta relies on her extraordinary climbing skills to quickly shoot up the trees and brachiate through the canopy to escape our chasing babysitters. She certainly doesn’t play fair!

One day when the group was heading to Forest School, Cinta abruptly stopped right in the middle of boardwalk that crossed a little creek. All the other orangutans and babysitters following behind her had to stop and wait for her move on. Everybody suspected that this was just another of Cinta’s tricks. She lifted her feet and, upon inspection, babysitters discovered that one was actually bleeding. She had tried to remove a piece of wood from the boardwalk, and a nail from it had punctured her foot. Clearly, this little girl cannot keep her hands off anything!

A babysitter quickly took Cinta to the clinic for treatment, while the rest of the group continued on to Forest School. Cinta had to spend a week in isolation to ensure her foot healed properly. Poor Cinta! She had to miss out on all the fun Forest School activities and couldn’t enjoy her favorite pastime— being the class clown— for a while.

The BOS Foundation team works hard to ensure that every orangutan gets the same opportunity to one day gain freedom in the forest. Cinta, who everyone agrees is one of the smartest orangutans in Forest School Group 5, is making all the right moves that will one day see her chosen as a release candidate.

Cinta has been a Forest School student for four years, and now at the age of five, she has joined the most advanced Forest School group in Nyaru Menteng. However, she still has a long journey ahead of her. Luckily, Cinta is eager to learn, and we never tire of teaching and supporting her.

When Cinta is not working hard on her skills, she can usually be found hanging out with her friends... and picking on them! She once yanked one little guy's hair so hard while he was climbing that it caused him to fall, and she has scared one of her girlfriends a few times by shaking a tree she was resting in.

Now that it is the dry season, Cinta and her pals can no longer find puddles dotted around Forest School like they could during the monsoon season. But there is still plenty of mud around, which Cinta and her friends like to roll around in and splash each other with! They are often seen returning to the feeding platform covered in mud, making it impossible for babysitters and technicians to tell who is who. (A tactic perhaps?)

We are delighted to see Cinta enjoying her time and gaining new experiences while playing with her friends in Forest School. Keep up the great work, Cinta!