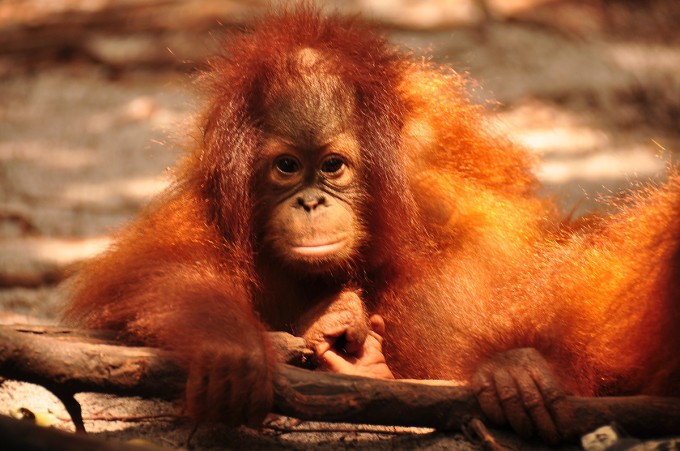 Cinta is a healthy baby who is about a year and a half  old. She's still quite small and weighs around 10 pounds. She's growing more confident with time. Shy at first, she is now very active and likes to socialize with other orangutans.

She recently moved up a level from the BOS Nyaru Menteng Nursery Group to the Infant Group. Her best friend Jumbo moved up as well. Separating these two would be inconceivable! Wherever Jumbo goes, Cinta is there, too. They eat together. They nap together. They even cuddle while walking. Jumbo sometimes gets irritated and tries to get away, but he is never mean to Cinta. Being in constant contact is in their cards.

It's a typical day at pre-school. On the playground, Cinta is playing with Jumbo, Barlian, and a few other babies. Cinta is a little scared of Barlian because he is slightly larger and more aggressive. She tries to avoid him and keep Jumbo between them. Barlian likes to lie down on a swing and reach out and grab whoever is walking nearby. This time it's Cinta who he's aiming for, but she quickly runs away and hides behind Jumbo.

Jumbo and Cinta like to visit a new baby called Syahrini, who is usually sleeping in her basket next to her babysitters in the Baby House. This 4 month old female baby was born to a young-adult female orangutan named Suja. When Syahrini caught a slight cold she was moved to the nursery so she could get 24-hour medical attention from her babysitters. Once her health is 100% she'll return to her mother, but for now, she's caught the attention of Jumbo & Cinta!

Jumbo tries to tug at baby Syahrini's blanket-- trying to get her to come and play outside with him and Cinta. Cinta stands beside Jumbo, watching the sleeping baby. After a few seconds, Jumbo is caught in the act by her babysitter! Jumbo is persistent, however, and won't let go of the blanket! The inevitable tug o' war ensues between him and the babysitter. A few minutes later, realizing he's been outmaneuvered by the bigger, stronger babysitter, Jumbo stops tugging, but he stays there with Cinta staring at baby Syahrini.... absolutely mesmerized.