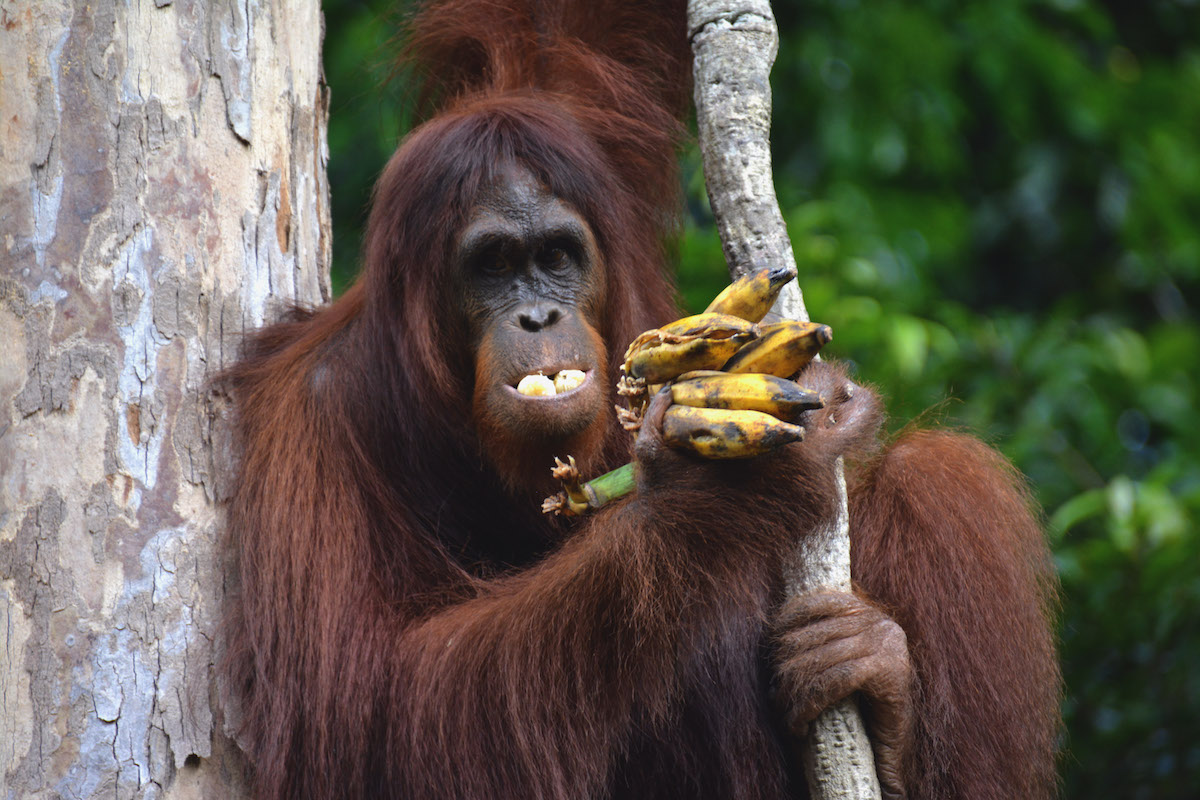 This month, both Badak Besar pre-release island and Badak Kecil sanctuary island, in the Salat Nusa Island Cluster, are in good condition: the river and canals are more than three meters deep, making it nearly impossible for orangutans to cross over to other islands. In these conditions, our observation team is able to work more efficiently, as time is not being spent preventing orangutans from leaving the islands or returning those who manage to cross the river.

In addition to the ideal water levels, recent weather conditions have also been relatively regular, with high rainfall helping the growth of natural orangutan food sources on the island. A lot of young leaves are now sprouting and flowers are blooming, as several plants enter their fruiting season, indicating that in the next few weeks, the availability of natural food on the island will sharply increase. This is certainly good news for Cinta, a skilled forager, and her group of friends.

Our team often observes Cinta enjoying forest fruits such as wild guava or mangosteen and picking the shoots from the grasses that grow tall along the canal bank. Even so, Cinta still routinely takes fruit and vegetable rations distributed by technicians twice daily at the feeding platform. This routine has given Cinta good scores in regard to her feeding behaviors. In addition to exploring, feeding behaviors are considered crucial in the overall release readiness assessment during this final stage of rehabilitation. In the wild, orangutans spend most of their time foraging.

On several occasions, our technicians have found Cinta, Hanin, Jumbo, and Valentino waiting by the feeding platform even before the technicians have docked the long boat. Unlike Valentino, who immediately rushes toward the boat to collect his share, Cinta is usually calmer and waits by the river. She will only pick up fruits and vegetables after the technicians have moved away.

Up until a few months ago, the team would regularly see Cinta roaming the island with Beni; but not of late. Now, Cinta is regularly found exploring alone, or occasionally with Hanin, whom she was housed with in the Socialization Complex before moving to the island last year.

Living on a pre-release island has had positive impacts on Cinta’s development. She has not only physically grown, but has also honed her natural skills and behaviors. Our team members are familiar with Cinta and her playful nature in Forest School towards other orangutans, surrogate mothers, and technicians. But here on the island, she has turned into a more mature and independent individual. She even tries to avoid our observation team. This is one of the positive changes we always hope to see in orangutans during their time on the pre-release islands.

Even though Cinta has shown rapid progress, she still has a lot of experience and skills to acquire during the pre-release stage of rehabilitation. However, we are certain that Cinta will be able to master these in no time!

The flood that took place in November 2021 saw almost the entire island of Salat submerged, with water levels up to two meters deep. As a result, orangutans undergoing the pre-release stage of rehabilitation on Badak Besar Island had to stay in the safety of the trees and conduct all of their activities in the canopy. Fortunately, they were all able to hold up well.

Spending the whole day up in the trees had a positive effect on Cinta, who previously liked to hang around a tree near the feeding platform. From that vantage point, she used to watch the island technicians observing her. Both human and orangutan seemed to be observing each other!

However, equipped with her excellent foraging skills, Cinta now prefers to spend most of her time deep inside the island. Only occasionally will she come to the feeding platform area and when she does, she will climb down from the trees to gain our technicians' attention by slapping the surface of the water with a stick. When Cinta doesn’t make it to the platform at food distribution time, the technicians will go the extra mile and call out to her or circumnavigate the island to find her. Cinta will often go off and explore the island for the whole day.

In addition to her sound exploring and brachiating skills, Cinta is also good at socializing with other orangutans. She has a good relationship with younger peers, Meryl and Valentino, despite the occasional tussle over food.

Interestingly, Cinta will only steal food from Valentino, as Valentino always seems to have more food than the others. Sometimes, Valentino will just let Cinta take his food, as Cinta is much bigger than him and usually gets it in the end anyway.

Cinta loves pineapple, banana, corn, and coconuts, the latter of which is heavily favored by orangutans on the island. Aside from being an additional food source, coconuts are a good enrichment activity, as they are not easy to peel. Orangutans must use their skills to peel the coir (a coconut’s fibrous coat), then break its hard shell to get to the water and the white, fleshy interior.

Cinta makes opening a coconut look easy! Like other orangutans, she rips apart the fibrous exterior with her teeth, then cracks the shell by banging it against a tree. Cinta will carry her coconut up a tree and break it open there, to avoid it being snatched by other orangutans, like Jumbo and Sura.

Cinta is also very skilled at foraging for natural foods: She will dismantle ant nests, search for termites in rotting wood, and consume liana bark and several types of young leaves as snacks. Cinta has also been observed eating the wild fruits she has discovered on the island, like forest guava and forest mangosteen. Phenology data indicates that the availability of food on Badak Besar Island is currently decreasing, but Cinta always seems to find some alternate sources!

Cinta really knows her way around the island and where to look for food!

Keep up the outstanding progress, Cinta! 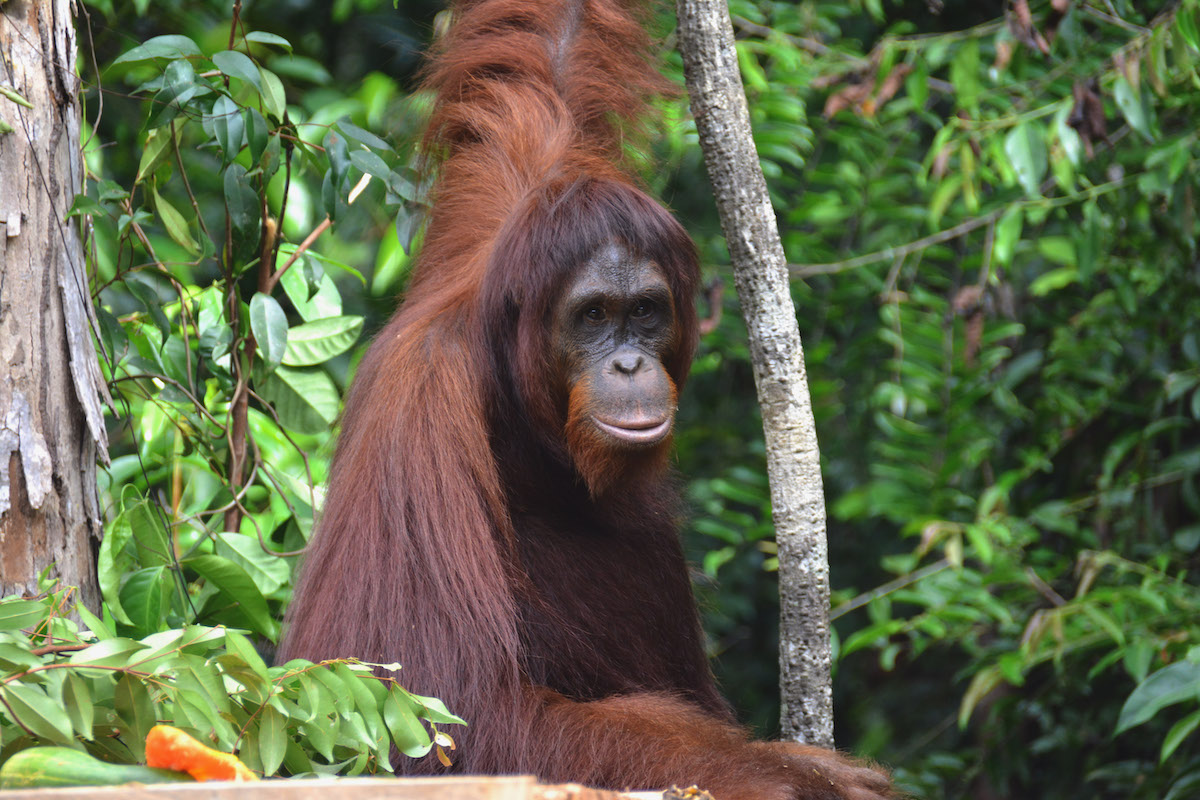