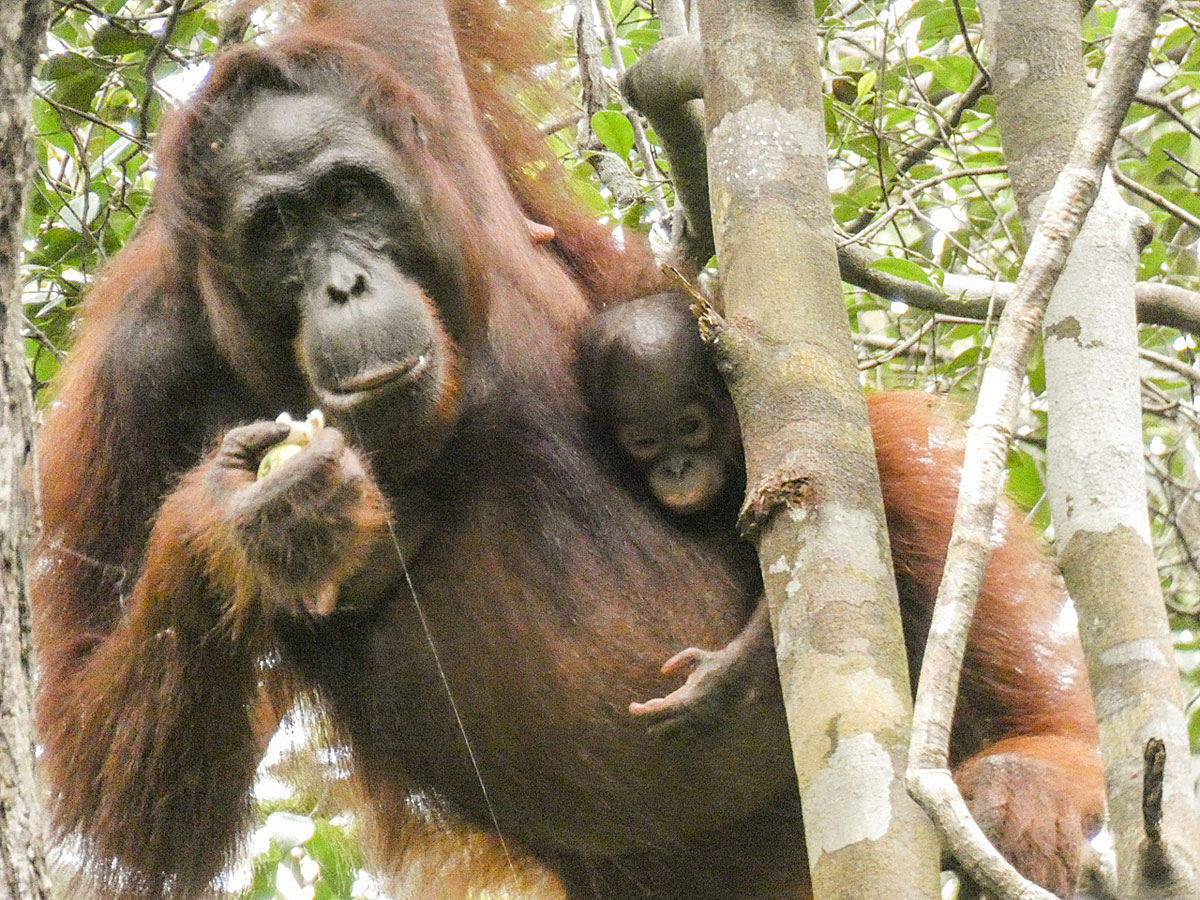 Last month, Azis and Jali (two of the Borneo Nature Foundation's orangutan researchers) trekked through the Sebangau National Park in search of Gracia and the Kids. But by late afternoon none of the family could be found, so they decided to return to base camp and try to search for these elusive red apes the next day.

Azis arrived back home in his village around 4pm. Then, an hour later, he received a call from camp.

"Hello Azis, there's an orangutan who has built a sleeping nest right next to camp. She's female and has a child," said Lis, the base camp's Kitchen Coordinator.

After ending the call, Azis and Jali quickly prepared their forest equipment and headed straight back to camp. That night they slept in camp — prepared to follow the orangutans early the next morning.

Before the sun came up, Azis and Jali started their search for the orangutans near camp. It did not take a long time to find the individuals. It was Georgia with her 1 year old son, Gus!

“We trekked a long way to find you Georgia, but you came to us, "Azis said to Georgia with a smile.

Georgia had built a sleeping nest in a 15-meter tall Rambangun tree. Rambangun trees are one of the orangutan's favorite trees for nesting. As well as this species, they also like Bintan Peter-Peter, which are often used for nests.

Azis and Jali watched Georgia and Gus in the dark and misty forest. The sound of birds and gibbons singing their beautiful morning songs surrounded them as the forest began to wake up. After Georgia and Gus came out of the nest, Azis and Jali immediately followed their movements towards the west of camp.

Papong fruit has a red skin with white flesh. The texture of the fruit is like mangosteen, soft and seeded. It tastes slightly sour mixed with a little sweetness.

While having breakfast, Azis watched little Gus learning to taste food eaten by Georgia. Although not yet brave enough to eat the fruit, the young orangutan sniffed and licked the Papong out of curiosity. Most of a baby orangutan's food intake is obtained from thier mother's milk.

After they all finished breakfast, Georgia, with her baby holding on tight, continued to move west. Georgia began to travel, around 600-700 meters, outside of her home range, most likely due to limited and sparse food resources.

During the 2015 forest fires many fruiting trees were burned down, reducing food resources in the forest. On the east side of camp there is little food and the orangutans are now spending more time on the west side. The west has many forest fruits which are the favorite food for orangutans and several other primate species.

The team continued their journey to follow Georgia and Gus until they nested in a tree in the late afternoon.

During the day, Georgia seemed relaxed and did not move quickly. She would spend an hour or so in one place and then would move on in search of more food... enjoying the fruit the forest provides and the freedom of the wild.

This is a typical day in the life of a wild orangutan— and of an orangutan researcher!