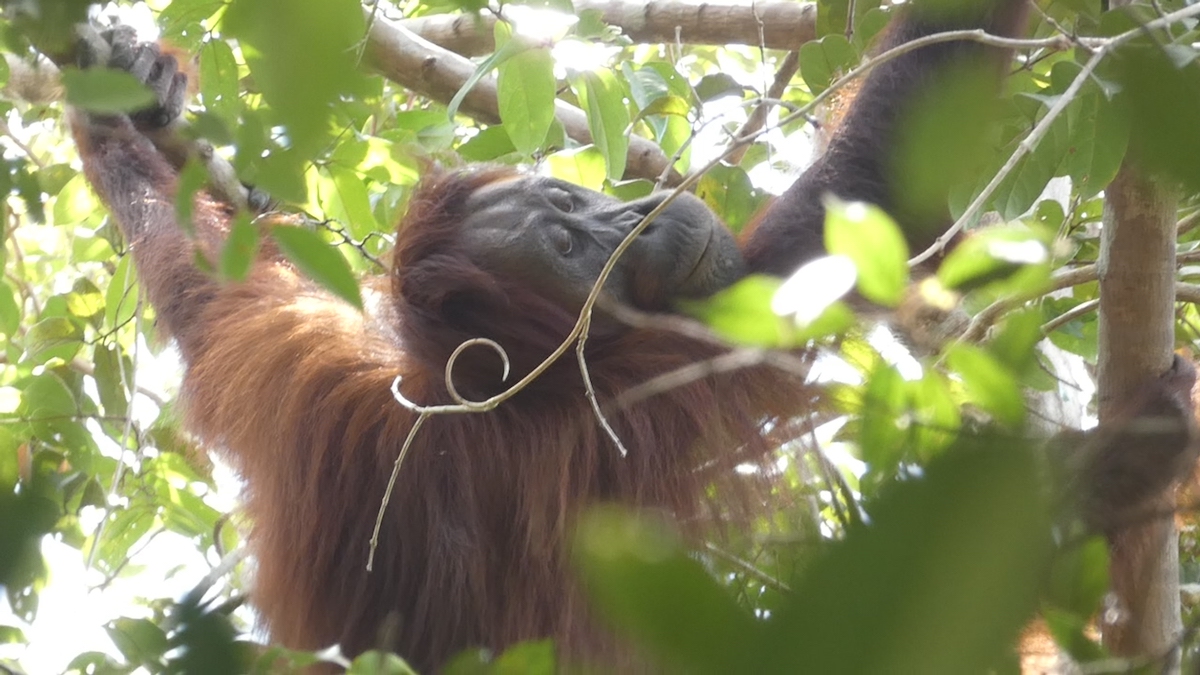 The Borneo Nature Foundation is back with an update on your favorite wild orangutan family! BNF has been studying orangutans in Indonesian Borneo for over 20 years, during which time our teams have built up a pretty comprehensive record of orangutan behavior. Following the rapid rise of COVID-19 in March 2020, we made the difficult decision to suspend all primate research until further notice. Due to the ongoing risk of transmitting disease to wild populations, our orangutan follows have yet to resume in full. However, case rates permitting, we are looking to return to pre-pandemic operations in the coming months.

Despite the current limitations on primate research, chance encounters in the field do happen and some observations have been allowed. Gracia was recently spotted out and about with her five-year-old son Gara by Abdul Azis, Orangutan Coordinator at BNF. Azis reports:

We were headed east in the direction of the Ari Canal, an area where orangutans had often been seen roaming in the past. Sure enough, we soon came across a large female: an imposing, shaggy figure who eyed our approach with suspicion from a tree about 20 meters away. Clearly annoyed, she made a kiss squeak sound (orangutan-speak for please go away and leave me in peace) and threw a stick at Azis, who narrowly missed being hit. Sensing possible danger, the team bid a careful retreat.

“Oh, that’s Gracia! Her behaviour was a little wild just then, but you must remember she hasn’t seen people around here in a long time,” Azis said, sneaking pictures of the disgruntled orangutan from behind a bush.

Azis assured us that this behavior is natural and to be expected. After two years of suspended primate follows, these orangutans have become unused to humans and will need re-habituating. Gracia is well known to our researchers and has been observed by Azis for twelve years, so there is a good chance she can quickly readjust.

Suddenly, we heard another kiss squeak and the sound of branches snapping to our right – another orangutan! Azis quickly identified this second individual as Gara, Gracia’s son. Gara is also well-known to our research team, many of whom observed him as a newborn. On this occasion, Gara was much more relaxed in our presence than Gracia, hanging nonchalantly from a vine, filling up on wild bananas, and even throwing twigs as if to invite a joke about his mother’s earlier confrontation.

From his hidden vantage point behind the bush, Azis turned the camera on Gara. Not wanting to test the young orangutan’s comfort, Azis told us “I’m staying mostly out of sight for now. It’s been so long since I was here with him last, I worry that seeing me clearly would just make him angry and upset.”

Deciding not to overstay our welcome, we returned to camp soon after. Since we were only conducting a count survey, the process hadn’t taken very long at all. “Today was just a survey, not a follow. We usually start follows at 5am, tracking orangutans from the moment they wake up right until they go to sleep, which can be after 6pm.”

Azis was over the moon to have seen Gracia and Gara safe and sound after two years of separation. On the walk back he told us that he was so glad to be reunited with his beloved orangutans.

“I hope that from now on our orangutan follows can resume as normal, giving us the chance to reacquaint ourselves with these characterful and Critically Endangered primates,” concluded Azis.

Gracia has long been a fixture of BNF’s orangutan research, recalled by our field teams with all the casual fondness of an old friend. She was first encountered by BNF’s primate scientists almost two decades ago, when her now grown-up daughter Georgia was just an infant. At around thirty years old, Gracia has proven herself a capable mother and one of the Sebangau National Park’s most charismatic residents.

Well-accustomed to being observed, Gracia is generally very relaxed around people while Gara has grown into quite the cheeky little man, Azis reports. Gara is very active and enjoys playing with small branches way up in the canopy. When he grows bored, he sometimes throws sticks at passing members of our field teams, possessed of the same naughtiness that seems to characterize all young orangutans.

Gracia and Gara appear to be in good health, although, at present, the specifics of their day-to-day life in the trees are impossible to gauge from a COVID-safe distance. Many of the orangutans we study will need to be re-habituated upon the continuation of our primate follows, having had only limited contact with people these last few years. This will be no small undertaking, as orangutans can move at surprising speeds, easily giving unwanted observers the slip by zigzagging from branch to branch while field teams on the ground struggle to keep up. The Sebangau National Park is a peat-swamp forest, where peat deposits often reach waist-height and even walking a single kilometer can take up to three hours - difficult terrain in which to chase orangutans from dawn till dusk!

To mitigate the lingering effects of the pandemic, strict health protocols have been put in place. Orangutans are Critically Endangered and their close relatedness to humans likely makes them highly susceptible to COVID-19. To minimize the risk of disease transmission in the field, our teams are instructed to always wear a face mask and keep a reasonable distance from any primates they encounter.

Despite the challenges of orangutan research, BNF’s work has yielded some fascinating insights into their behavior. In 2017, our scientists published a paper in Nature Scientific Reports which showed that orangutans use the same medicinal plant as the local indigenous population to treat joint and muscle inflammation. The question is, who learned from whom? What exciting findings will BNF’s teams uncover next? We hope to bring you updates on our active research again soon!