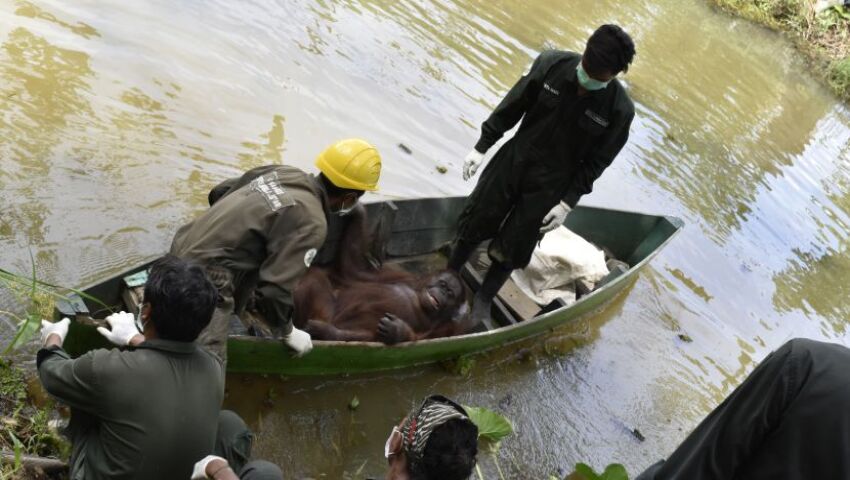 The following tale of Papa's big move has been adapted from a Dec 31, 2017 blog post by volunteers from The Great Projects a UK-based company that has been running an awesome volunteer program at BOS Samboja Lestari for many years.

Please note: Due to the pandemic, there are currently no volunteers allowed at the facility, but when things change, if you'd like to volunteer, send us a note!

At BOS Samboja Lestari there are a series of "orangutan islands" that act as a way to give some of the orangutans at the sanctuary a chance to get out of their cages and roam, climb and explore— and in some cases help to prepare them for release back into the wild!

It’s always exciting when this happens at Samboja, so we will be taking a look at the three orangutans who are now exploring their new home and see how the release went. (Note: Papa, Vera and Citra have since been joined by another female named Isti.) 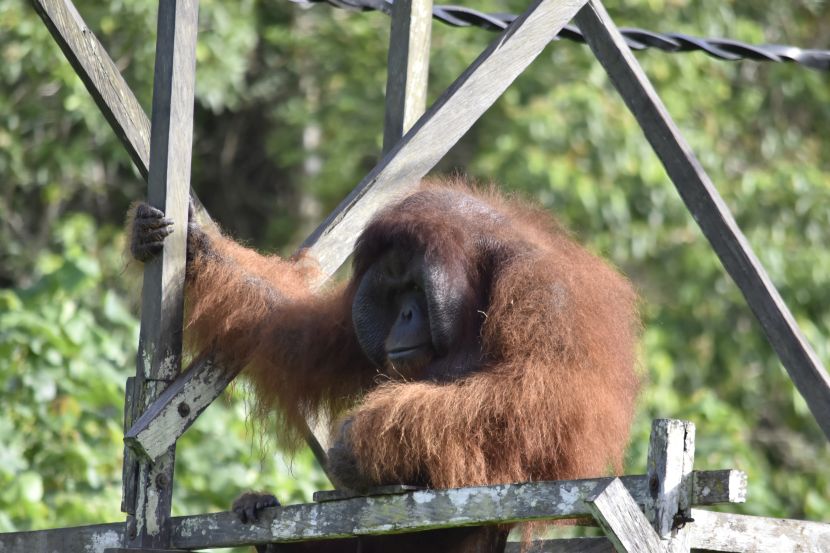 Now in his 30s, Papa is extremely handsome with full cheekpads (or flanges) on his face.

Papa came to Samboja from Taiwan and arrived at facility on September 1, 1994, at the age of 5. Unfortunately Papa had suffered from Hepatitis B since first arriving at the sanctuary and he therefore had to stay in a separate complex with other orangutans. The technicians who treated Papa considered him as a "gentle giant" and Papa never showed an aggressive attitude toward incoming technicians or any other orangutans... except when he was stressed or saw someone else getting fed before him!

Unfortunately, due to living with a complex medical condition and with limited space to prevent the risk of transmission of the disease to other orangutans, Papa never had the opportunity to develop natural skills such as climbing, foraging, and many others. However, Papa does always try to make a nest every time he is given leaves. 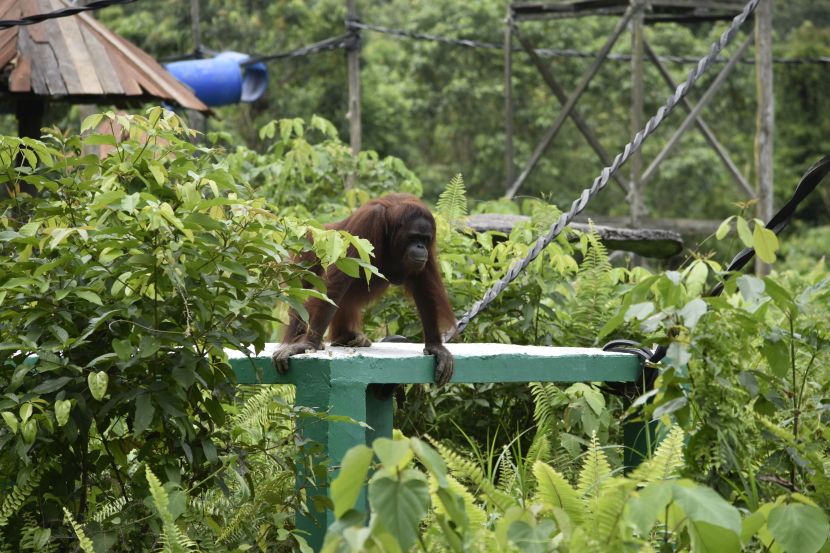 THE SECOND ORANGUTAN TO GET A NEW HOME IS CITRA

Citra was confiscated from the city of Palangka Raya (in Central Kalimantan). She came to BOSF on September 9, 1998 when she was just 2 years old, in a highly worrying condition. She was malnourished, and with both her legs and arms paralyzed Citra could only sit and crouch. We believe this was caused by improper treatment from her previous owner. We gave Citra daily massage therapy until she could finally start moving her limbs properly again. It took almost a whole year until she could straiten her legs and walk.

Adding to her issues, Citra was also found to be suffering from Hepatitis B so she had to be placed in a special complex to prevent the disease spreading to the other orangutans at the sanctuary.

As is the case with Papa, Citra's condition has now been reclassified as harmless and she can be put in together with other orangutans. Citra is now in her 20s and she has a moderate level of foraging and nest building skills that she can hone on Island 4. 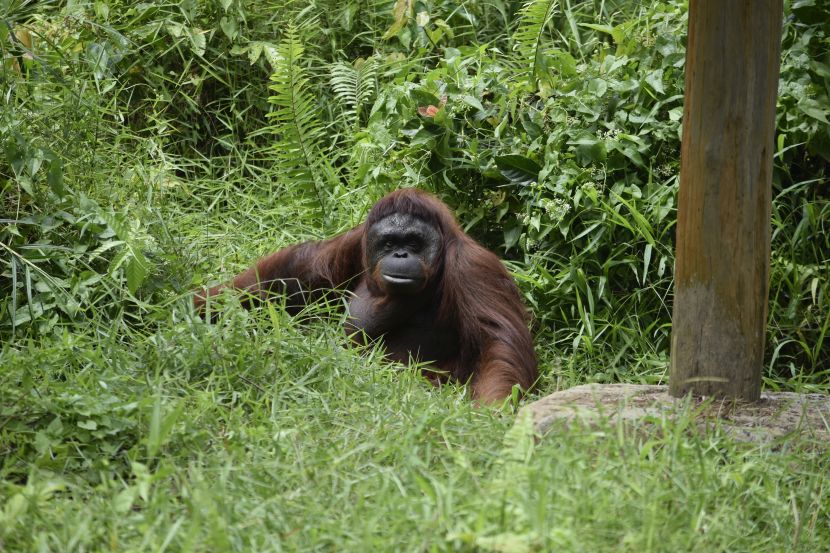 THE THIRD MEMBER OF THE TRIO ON THE ISLAND IS VERA

Vera came from Gelanggang Samudra Jaya Ancol circus in Jakarta, on August 15, 2006 when she was a 9 year old, rather obese orangutan weighing 52 kg.

Upon her arrival, Vera had been placed in the Socialization Complex, but due to a lack of aggressive behavior Vera could never properly compete with female mates in the complex and she felt more comfortable being alone in the complex. However with that being said, Vera can be quite aggressive towards technicians.

Vera is in her 20s and is getting along quite well with Papa and the others. 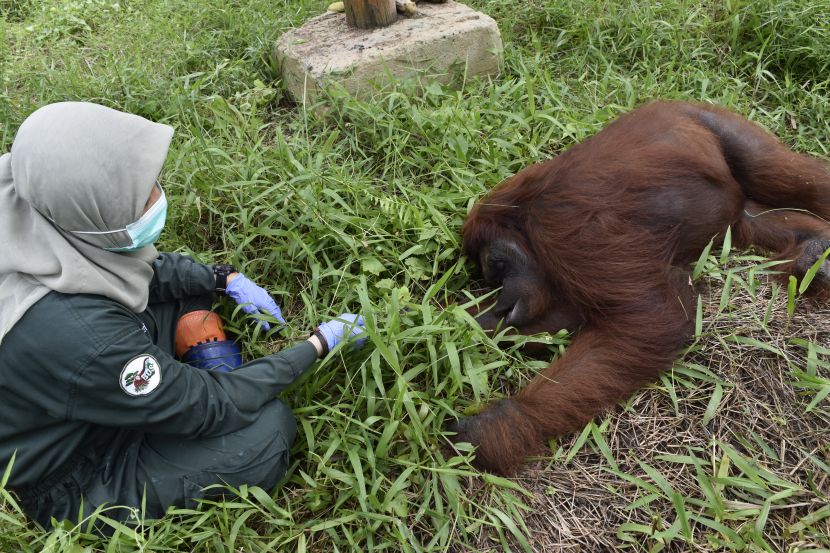 HOW DID VERA RESPOND TO HER NEW HOME?

Vera was first to be placed on the island. She was in a deep sleep from sedation and it took her a considerable amount of time to wake up, and even once she did, she was very inactive and still sleepy.

Over the next few days she spent the majority of her time at the spot where she was released, and enjoyed her time relaxing under the platform watching people go by. At first she would not venture far from her release spot or interact with Citra and Papa, but this was normal behavior for an older female orangutan, who is naturally very territorial. With time, she would develop more confidence and begin to explore her new habitat. 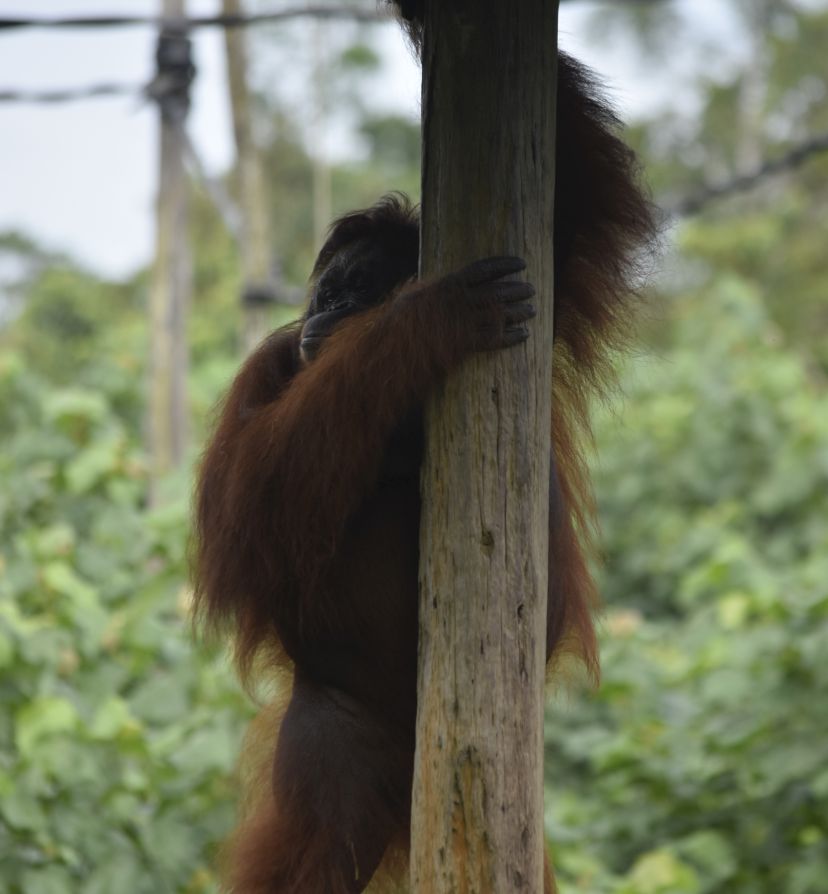 The transition of an orangutan adapting to their new surroundings can take time, especially when they move into a bigger region.

While Vera was the least active of the group, she slowly began adapting and spending time socializing with the others. She even appeared to enjoying their company and was eating well, which is always a positive sign. 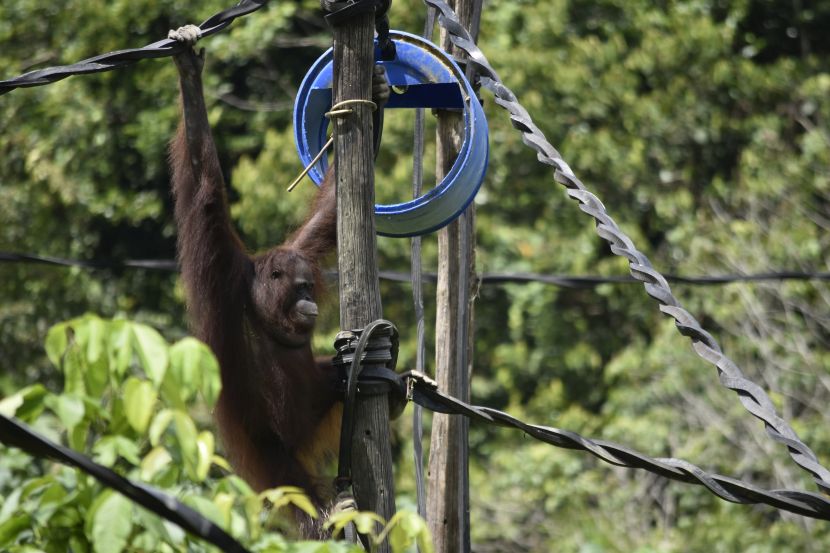 WHAT DID CITRA GET UP TO UPON HER RELEASE?

Another female orangutan, Citra, was transferred onto the island shortly after Vera. Citra is much smaller than Vera, and she was placed under a platform near to her new living companion.

She did not need sedating as deeply as Vera did, and awoke quickly after the transfer. Instantaneously Citra tried to climb the platforms and ironwood, but initially, the sedation did dampen her abilities to do so.

As a result of the sedation, her bouts of energy came in waves but once her drowsiness disappeared there was no stopping her! She completely embraced her new surroundings and explored the whole island, all the while using the climbing structures we have fixed for them. She has rarely been seen on the ground since being on the island is certainly the most active of the 3! 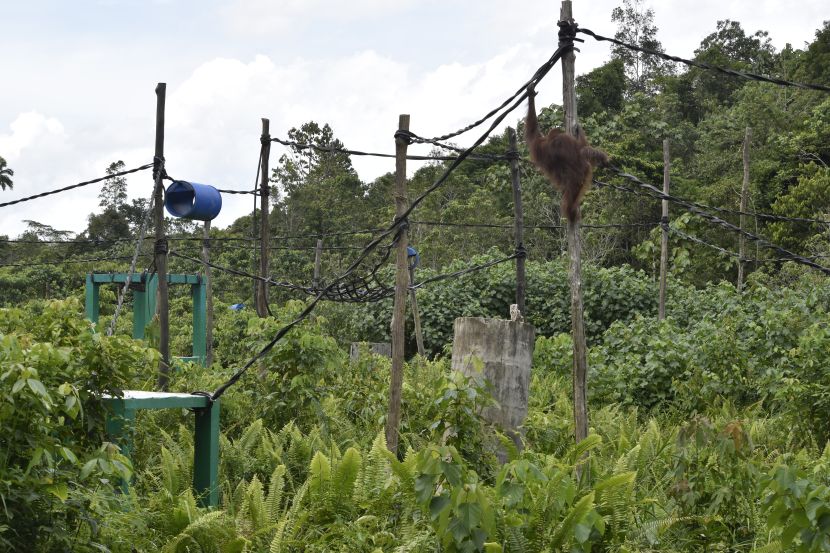 When Papa was released 2 days later, Citra showed great interest in his release and almost came to say hello at one point! She has been extremely curious of Papa and we have been observing her trying to approach him, but unfortunately for Citra, Papa has shown little interest in her for now. Like Vera, she is also eating well and looking healthy! 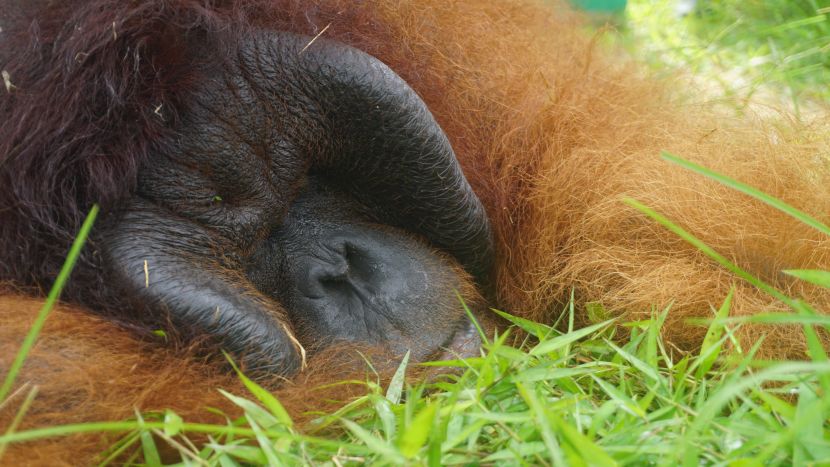 FINALLY, HOW DID PAPA REACT TO HIS NEW ENVIRONMENT?

The patriarch of the island, Papa was released onto the island after the girls were already settled in...

After Romeo, Papa is the second oldest orangutan at the sanctuary and we have seen that he is the most noticeably stressed orangutan that we have at the sanctuary. He rarely looks happy and likes to pretend he doesn't care about anything when in fact he is the complete opposite! This is a typical trait of a dominant flanged male orangutan, and these traits also include a slight dislike of men in addition to becoming stressed very easily.

Papa's past mistreatment and misfortunes have unfortunately caused him to be a very timid soul, but this is why it is so wonderful that BOSF is now able to give him a better life after so long.

We cannot stress how important the role is that volunteers have played in making this possible. It's because of volunteer efforts in constructing the platforms on the islands, creating enrichment for the orangutans and so much more that this has all been possible. These orangutans will be able to live out their lives in a comfortable environment, and this is partially down to our amazing volunteers! 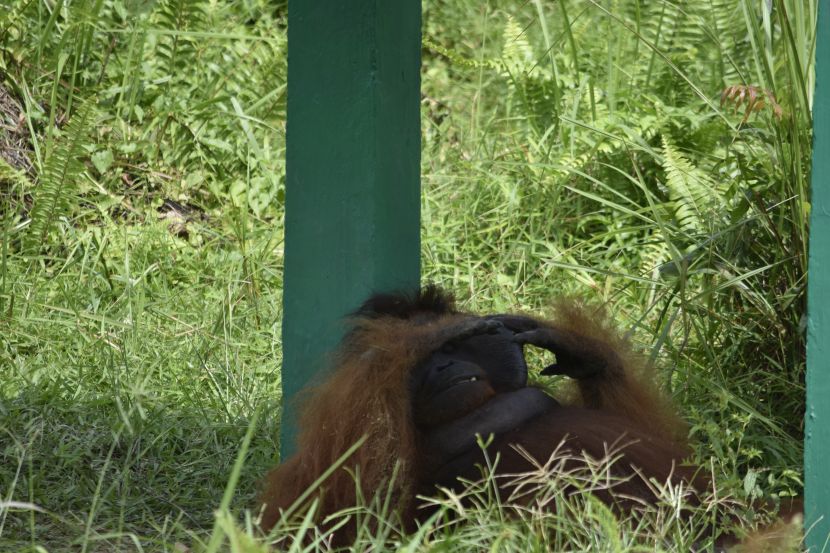 Papa woke up relatively fast once on the island but was very drowsy from his sedation. This is, however, completely normal and he spent most of the morning sleeping off the sedation under the shelter of the new platform.

In the beginning, Papa didn't pay much attention to the females. This was not a surprise though as we had predicted this may happen due to his previous disinterest in interacting with females at the sanctuary. After all, he'd never been able to have physical contact, so it was all new to him!

As soon as Papa saw his caregivers, he rose from his sleeping position and tried to show how powerful he was with a display of shaking branches! He then went on to settle down and pretended to ignore them, but he didn’t realize they could see him constantly sneaking glances to see if they were still there. Each time they came in his view, Papa would express these displays of dominance, then settle down and secretly glance at them once more— behavior very typical of cheekpadder males! 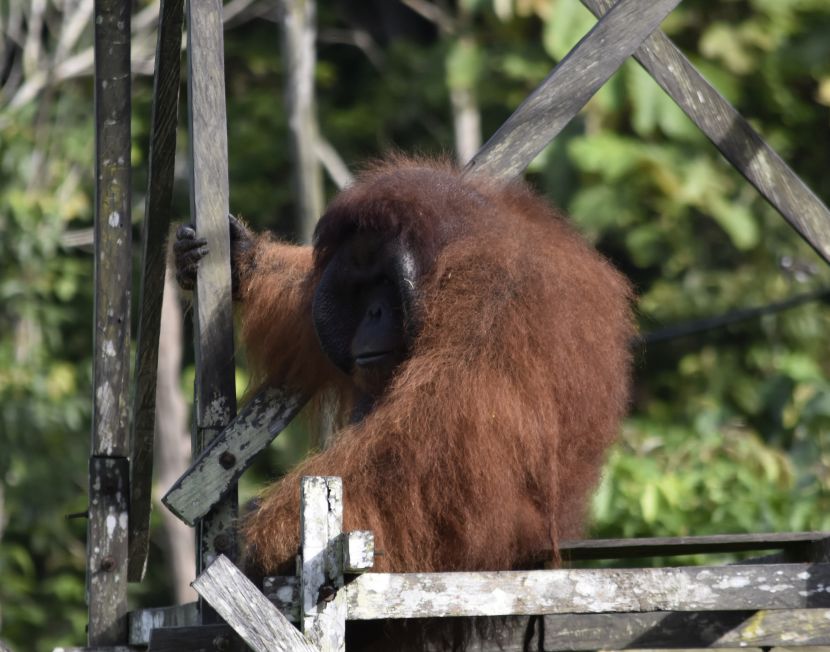 Normally, an orangutan will check their entire territory first when in a new enclosure, but the keepers noticed that Papa took his time doing this. The keepers noticed that in the beginning Papa liked to spend his time between the spot where he was released and on top of the platforms. He likes to sit quietly for long periods of time. This suggests he was not confident in his new home just yet, much like Vera. This is likely due to the large number of years he has had to spend in a smaller area, and Papa may find his new habitat quite daunting because of this.

We also have to wonder... Maybe he didn't know if it were actually real? Or if he were only dreaming...

With an orangutan like Papa who is so mentally scarred, the adaption process towards living in his new territory would take some time and it would be a while before he developed the confidence to explore the entire island. However, Papa is a very strong-minded individual and he eventually began to understand that he has an entire new kingdom to call his own. 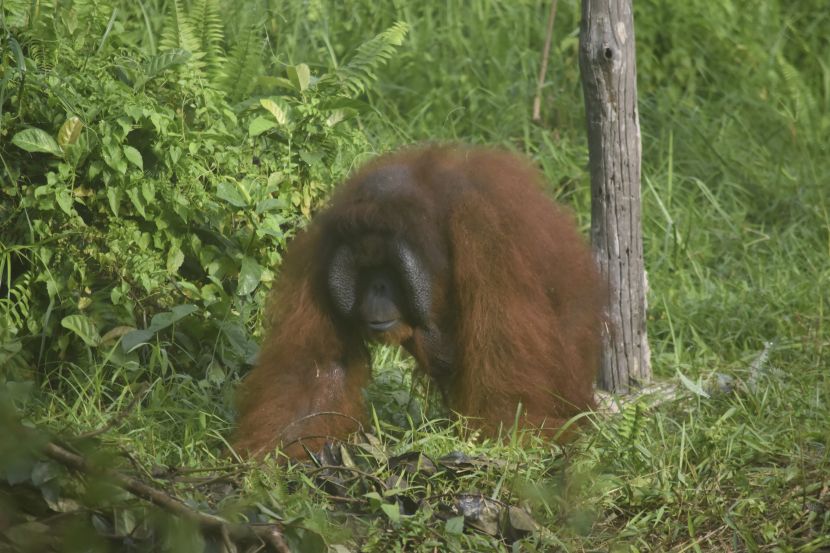 In light of these circumstances, he is also eating well and looking healthy.

Interestingly, since the new females moved onto the island with Papa, his neighbor, Romeo, who has always been confidently ruling over the island next to them, has been spending most of his time at their end of the island— suggesting he is very interested in what's going on over there! Papa did not venture to that edge of the island for a few days... but he eventually did.... We wonder-- what were he and Romeo thinking? 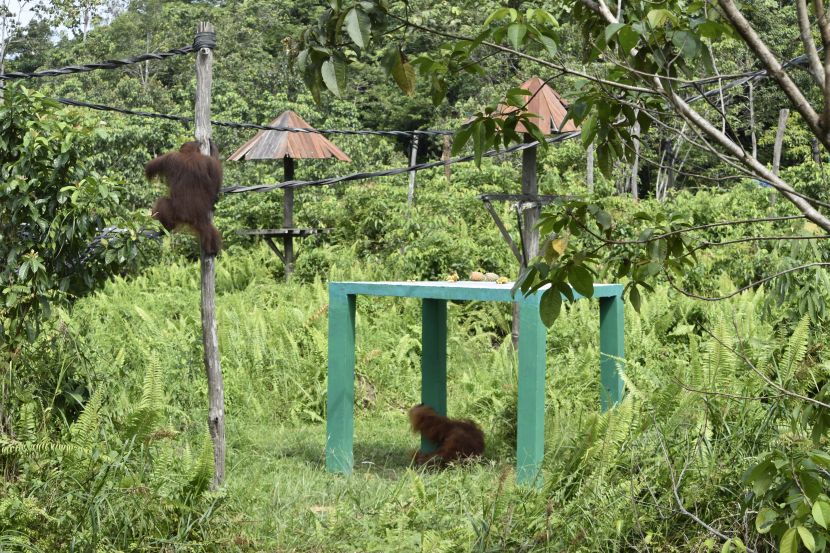 Releasing orangutans is always an emotional journey, and you have to expect for the orangutans to be unsure about their new surroundings. The psychological damage many of these orangutans have suffered does make changes in their lives overwhelming and intimidating. Different orangutans respond in different ways, and this is certainly the case with Vera, Citra and Papa. However with time, as was the case with Romeo, Eve and the others next door, they began to adapt and fully enjoy their new lease on life... finally free from the cages.....

Once again, we want to thank the incredible, dedicated and hardworking team at BOS Foundation, along with the awesome team of volunteers, as without them, none of this would be possible. Thanks to these incredibly dedicated people, these orangutans can finally start to live the life they deserve.