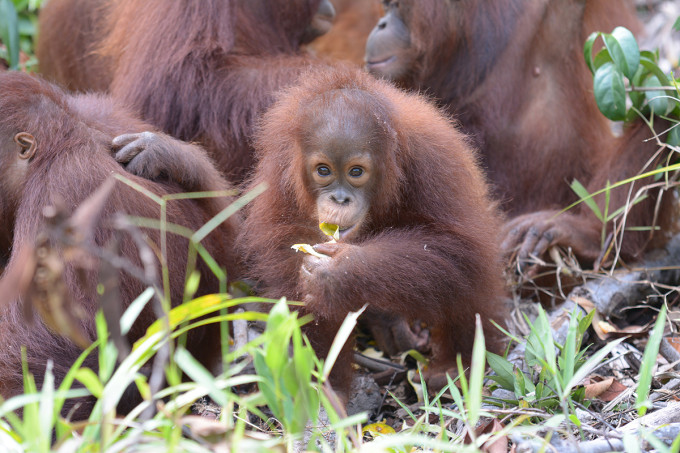 Jumbo is doing really well in Forest School Group 1. He follows the instructions from his babysitters very closely and is learning a lot from them. Now, he is learning about different kinds of food available for orangutans in the forest and he is starting to spend more time up in the trees.

In order to teach Jumbo food he can get in the forest— especially termites!— the babysitters like to show the babies different foods. On 'termite day' they knocked apart the weathered and rotten wood until it cracked and opened down the middle. At first, Jumbo seemed to be confused about what the babysitters were doing. When the wood was cracked open and Jumbo saw the termites, he at first seemed afraid of the termites. However, the babysitters slowly built up Jumbo's confidence and taught him very patiently that termites are indeed his natural food. Slowly, his confidence and trust grew and he finally tried eating the termites.

In Forest School, Jumbo is one of many students considered as easy going. He has made a lot of friends and gets along very well with other orangutans. His best friends are a group of little guys called Erik, Obama and Unggang. The three of them spend all day playing together. On the ground at first, they have now started to spend more of their time up in the trees.

The trees are not very tall but, for a two-and-a-half year old orangutan, it is a very good start for them to learn how to be wild in their natural habitat. Nevertheless, after they have gotten tired swinging and hanging around in the trees, they climb down and play around near the tree roots.

Jumbo still occasionally shows his dependency on the babysitters. He only goes to school if the babysitters will take his hand and lead him to the forest. When a babysitter tried to not to do this, Jumbo got afraid and cried loudly. The only thing that would stop his crying was a bottle of milk! So, he may be growing up, but he's still a little guy inside... He'll get there!

Jumbo sometimes gets picked on by a larger male called Grappa. Grappa, a student of Forest School 2 (Group 5), likes to visit the group 1 students so he can have a little fun. His mischief is shown by poking Jumbo constantly and continuously until Jumbo gets angry and sad. When this happens, Jumbo runs to his babysitters and asks for protection.

Jumbo loves to feel the wind blowing on his face. If the wind is blowing he is so happy and he shows it by pursing his lips! The babysitter love seeing him like this... and his happiness is contagious!