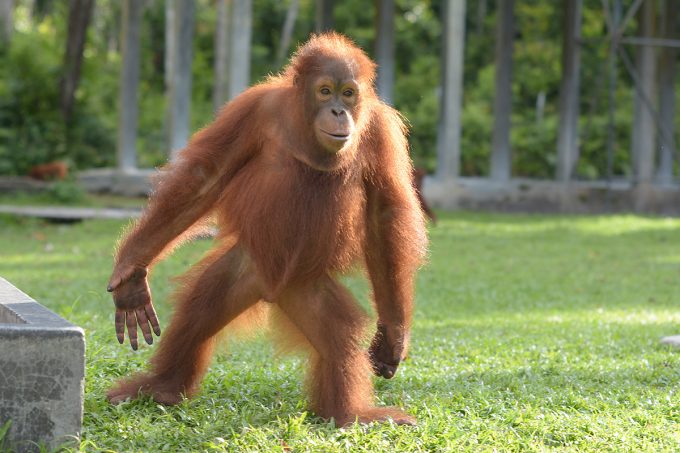 Jumbo is doing really well in Forest School and we are very proud of his progress. As his name implies, Jumbo is a big guy! At least now he is! His bulky size, however, does not hold him back in the trees! Jumbo can dangle and move around tree branches with the best of them in swift and nimble movements; as such he was promoted straight up to Group 4!

Jumbo is a very curious young orangutan, and does not hesitate in pulling things out of the babysitters' or medics' bags if they grab his attention. With his powerful grip, Jumbo finds no difficulty in seizing objects and whisking them away to examine away from the others.

Earlier this year a babysitter recently discovered Jumbo had a wounded hand, and although he looked fine and was in no visible pain, she took him to the clinic just to check. Upon arrival at the clinic, a first aid kit caught Jumbo's attention and the medical staff had to spend a good amount of time chasing him around before they could treat him. Thankfully, his wound appeared to be just a scratch, no doubt inflicted during a friendly wrestling game with friends in Forest School.

Jumbo is currently in great physical condition and eats very healthy portions; hence the reason he is bulking up so nicely. With his dark brown, thick hair, Jumbo is a handsome fellow indeed! He is now getting bigger, stronger and more muscular. He is really starting to live up to his name! Jumbo likes to challenge the babysitters with wrestling matches, but they have already figured out a unique way to distract him: They fan him, which he loves! Jumbo closes his eyes and enjoys feeling the air on his skin, and soon forgets about the wrestling.

Jumbo loves being in Forest School, where there are a lot of natural foods to eat and fun games to play. His favourite thing to do is play in muddy puddles, which can be found dotted around the Forest School area. Jumbo cannot bypass a puddle without dipping in his arms and having a good splash.

While his friends encourage him to follow them into the forest, Jumbo often opts instead to stay behind and play around the Forest School area, or dangle on lianas nearby. His nest-building skills have yet to improve. He still prefers to make repairs and alterations to used nests and sleep in them, rather than make his own. This is a habit that will have to change!

Each and every orangutan has their own individual characteristics, and ways in which they like to spend their time in Forest School. Some like to play, learn, or enjoy group activities, while others like to explore the forest alone. Jumbo likes to spend his days playing, exploring the forest and foraging. He enjoys spending time in various locations around the Forest School area. He will play in the small creeks and puddles, and even visit the younger groups. He loves being free and roaming around!

Cheeky Jumbo likes to pull practical jokes on babysitters by tugging at the lanjung bags they carry and causing the fruit inside to spill out. He will quickly snatch up the fruits with both hands and take off with them high into a tree. Jumbo is indeed a successful looter!

Aside from enjoying the fruits he takes from babysitters, Jumbo also actively forages for natural foods in the forest. He likes to find weathered pieces of wood and whack them together to expose the delicious termites inside.

Jumbo likes to show off his strength and size in the playground. He will walk around in an intimidating manner, banging a stick on the ground. However, his peers and the babysitters all know that Jumbo is just bluffing, because whenever he is challenged, he runs away! In fact, Jumbo's tough-guy act only really works on the younger orangutans in Group 2.

It seems Jumbo enjoys getting attention from others, and wants to be seen as a dominant figure. While he is showing signs of becoming more independent and courageous, he still has a lot to learn. We are sure, however, that Jumbo will continue to grow into an awesome individual!