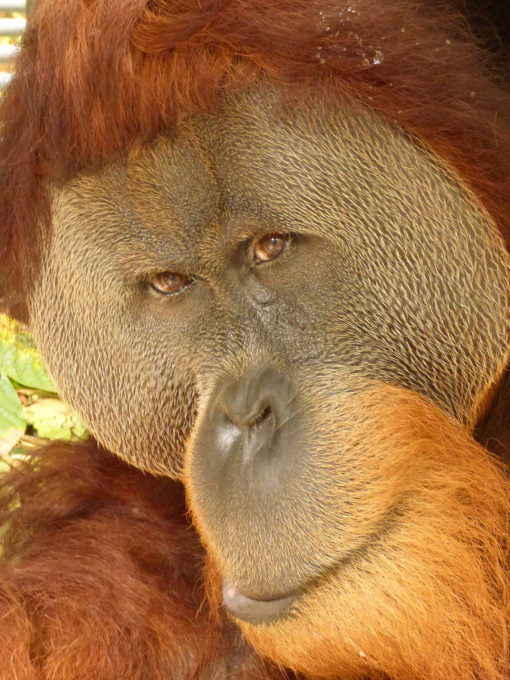 Although Krismon has had a bit of a difficult adjustment period during his first three months at the SOCP quarantine, he has improved significantly since his arrival. He has gone from a very unhealthy, traumatized individual to an inquisitive, friendly, and active adult male orangutan.

When he first arrived, Krismon could only stand and support his body weight for a few seconds at a time, with severe shaking episodes. Now, three months later, Krismon is moving around his cage, standing for much longer periods of time, and even hanging upside down to retrieve "kongs" filled with jam and sunflower seeds — his favorite enrichment! This was a very difficult process for Krismon and required a lot of encouragement from the quarantine staff.

Krismon has had extremely difficult life — first witnessing the death of his mother, followed by a traumatic experience being sold as a pet and left in deplorable conditions for nearly 20 years, and then, once again, being taken away from all that he had known... but being taken to the safety of quarantine. This level of trauma meant that the team had to very careful when approaching Krismon, allowing him to adapt to his new caregivers and his new surroundings, allowing him to see that he is now in a place of safety and care. As Krismon became more comfortable, the team began to introduce new enrichment items, which encouraged him to interact both with his environment and his caregivers. This interaction is also extremely important to encourage Krismon to move and develop his muscles, which were severely atrophied from having lived in such an abysmally small cage for such a long period of time.

In August, after a very slow transition, Krismon fully has begun to adapt to a more natural orangutan diet, after living on bread, rice, and other human food scraps for nearly 20 years. Krismon's previous diet left him at risk for many typically human health issues, including diabetes, and could not be immediately changed, as this could have caused a life-threatening reaction. In order to lower the level of risk, the team continued to feed Krismon rice, but also encouraged him to eat natural orangutan foods by mixing cooked vegetables in with his rice and providing him with fruit and protein smoothies every day. This allowed his body to slowly adapt to the correct foods, while also showing him that these foods taste good, and encouraging him to eat the necessary amount to begin gaining weight and developing muscle! We are thrilled to say that Krismon is now on the same diet of fruits, vegetables, and seeds and nuts that the other adult males orangutans at the quarantine consume.

At the beginning of September, the team was able to transfer Krismon from a small isolation cage to a larger cage meant for a group of adult female orangutans being cared for at the quarantine. Although this is only a temporary solution, it provides Krismon with more space to exercise and the necessary space for him to continue to recover from severe muscle atrophy at an appropriate rate, while also creating desperately needed space in isolation for new arrivals to the quarantine (of which there are many!).

Krismon is still a bit nervous in this new enclosure, which was expected, as he now has more space than he has ever had since his illegal, traumatic capture from the forest as an infant; however, we are confident that Krismon will continue to adapt and improve! Although he still faces a very long road to recovery, Krismon is well on his way to becoming a healthy and happy adult male orangutan.

More photos and video coming soon... Thanks for your patience! 🙂 {:(|}