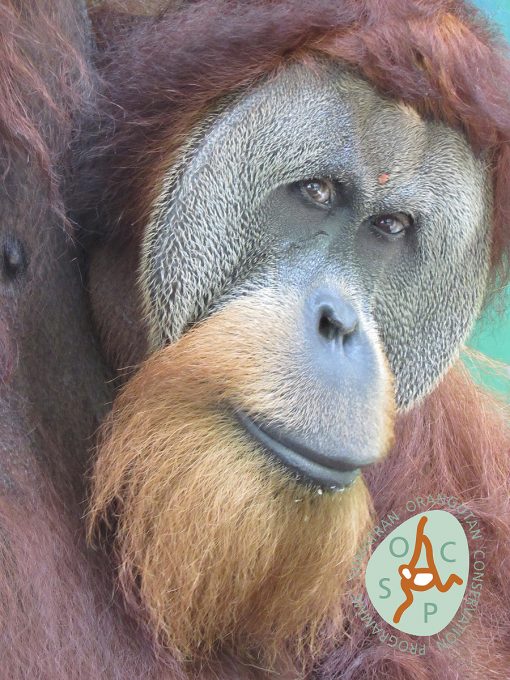 Krismon is an adult male orangutan estimated to be around 20 years old. Krismon was confiscated on 30 May 2016 from a house in Kabanjahe, North Sumatera.

Krismon is one of the orangutans staying in SOCP's Permanent Facility, as he is unable to be reintroduced to the forest due to his having spent most of his life in a small cage. He is too large and strong to try and work with to rehabilitate and teach him how to forage in the wild on his own. So he will be moved to the Orangutan Haven in late 2018, where he can stay on one of the 9 orangutan islands SOCP is currently constructing.

In the last few months the quarantine staff has tried to introduce Krismon and Dek Nong— another unreleasable orangutan (due to a chronic arthritis condition) female, who is Krismon's neighbor at the facility. The thinking being that they could keep each other company and improve their mutual welfare. Dek Nong is now on birth control. We have tried to introduce them to each other by opening up a subsection of the cages (not allowing full contact but they can still interact through the bars). Unfortunately, until now they do not seem to be interested in each other. Krismon was observed to come closer to Dek Nong's cage but seemed actually more curious about the building next to him, and not Dek Nong who was staying there. Dek Nong did not approach Krismon either... but we will keep trying!

Although Krismon's physical movements are still slow, overall his abilities have vastly improved compared to when he first arrived at the center. He now stays mostly up on one of the platforms in his enclosure, something that never happened early on as he seemed afraid to go too far off the ground. He also responds well to keepers at feeding time. He likes almost all kind of foods provided to him.

Since Krismon is an adult male orangutan he needs a larger space for himself, which is one of the reasons why he is alone in his cage. As mentioned above he does not yet seem interested to join Dek Nong, but hopefully this will change soon!

Krismon has never shown any serious physical health problems. His lips and jaws can sometimes tremble but his condition is much better compared to when he first arrived at the center.

In July 2017 Krismon became a blood donor to an orangutan named Mawasudin, who needed bone surgery due to fracture on his femur. Mawasudin was a reintroduced orangutan up at the SOCP Jantho Reintroduction Station, but had gotten injured and was rushed back to Quarantine for observation and eventual surgery. As he and Krismon share a blood type, and Krismon is a big strong male, his blood was given to Mawasudin via transfusion. Krismon immediately recovered, and Mawasudin's surgery went well, and we expect to soon be able to re-release him at Jantho soon.

Going forward, we will continue the process introducing Krismon to Dek Nong, but we will not force them. Instead we will let them choose whether they want to come closer or not. It is good to keep doing this while there is only one sliding door between their cages. There are two sliding door that need to be opened before they have direct contact. Getting to know other orangutans will help Krismon to adapt later in an island setting in the Orangutan Haven.