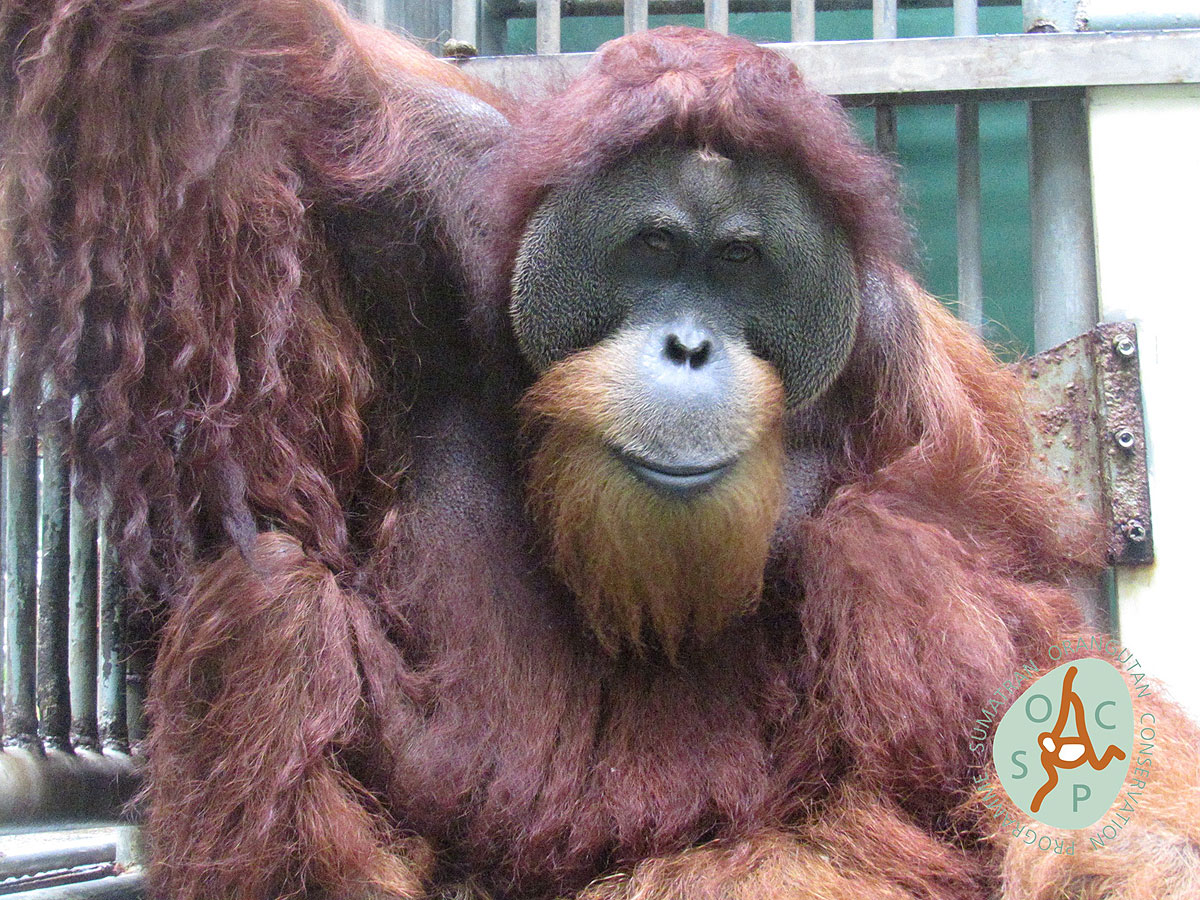 Krismon is an adult male orangutan who was estimated to have been more than 20 years old when he arrived at the SOCP Rehabilitation and Quarantine Centre on 30 May 2016. Krismon was confiscated from a house in Kabanjahe, North Sumatera.

Krismon is intended to become a resident of the SOCP Orangutan Haven, as he is unable to be rehabilitated and reintroduced back to the wild. The Haven is still very much in progress, and we expect the Orangutan Islands to be ready early next year, so for the moment Krismon is still being cared for at SOCP's Permanent Facility.

Krismon still prefers sitting on the platform in his cage and leaving it only to take food. The keepers have noted that he still shakes and has some muscle tremors when climbing in the cage. However, compared to when he first came to the center, after having been forced to spend nearly 2 decades in a small cage not much larger than his own body, he has made a huge recovery.

Krismon likes whatever fruits or vegetables we provide for him and he always eats it all. One behavioral pattern we've noticed is that he will become agitated if a male keeper approaches his cage without bringing some food! He also does not like if there are many people around his cage.

Krismon is able to open whole coconuts, which he seems to relish. He tends to eat them more slowly than other orangutans do, and sometimes takes a rest midway through before continuing again to finish his meal.

Krismon is housed adjacent to Dek Nong, and the compartment adjoining the two cages is still partly opened, allowing for contact through the bars if desired. However, until now the two have not shown much interest in each other. We are all eagerly awaiting the readiness of the Orangutan Haven, so we can get Krismon and the other permanent residents onto the green islands!

Krismon's rehabilitation program is going well so far and seems to be helping aid his recovery and general wellbeing. Krismon has started pulling at the keepers' clothes whether he gets a chance, but we're not sure why. Does he wants to interact with the keepers? Or is it an indication that he is unhappy?

The staff has recently been focusing on Krismon's what sort of training or interaction is needed in order to prepare him for his move to one of the new islands in the Orangutan Haven. This will be a big move for him. After spending nearly his entire life in a cage, it will be quite an adjustment to live under the open sky without metal bars on all sides... We're all confident that with enough preparation and positive incentive he'll be able to make the transition quickly and easily.