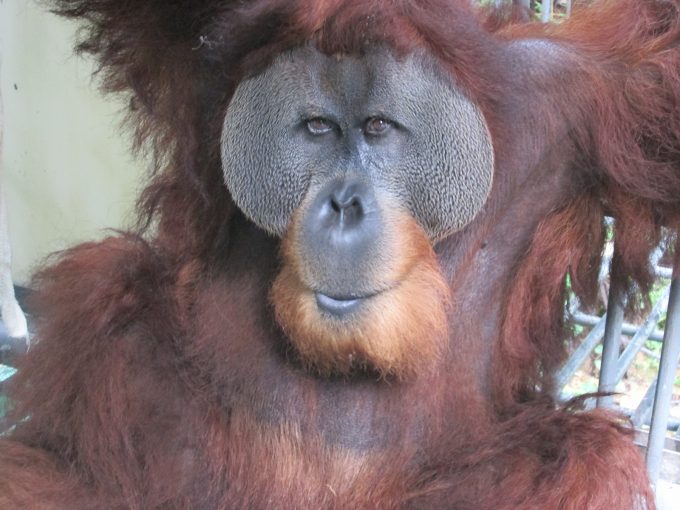 Krismon, due to his having been kept for two decades in captivity, confined to a small cage from infancy until his current adult flanged male state, is one of SOCP's permanent residents. It is simply not possible to fully rehabilitate an orangutan in his physical and mental condition to life in the wild. However, Krismon has also shown great signs of improvement since arriving at the SOCP Quarantine last year, becoming increasingly more active and confident.

The caregivers have taken to placing environmental enrichment items and foods atop his large enclosure, and he can now be seen climbing to the top, to which he also later brings leaves and branches to build sleeping nests in. SO, despite the years of captivity, he still has his 'orangutan' instincts.

Krismon also has a hearty appetite, which is expected from such a big guy! He will eat all types of fruits and vegetables that are served to him every day. He likes watching the keepers as they go along the pathways with the fruit, waiting for the next meal to arrive!

Thankfully SOCP is now well underway in breaking ground towards developing the Orangutan Haven, where Krismon will have a new, more natural home on a custom built 'orangutan island', where he will be able to spend his days in peace, tranquility and comfort.