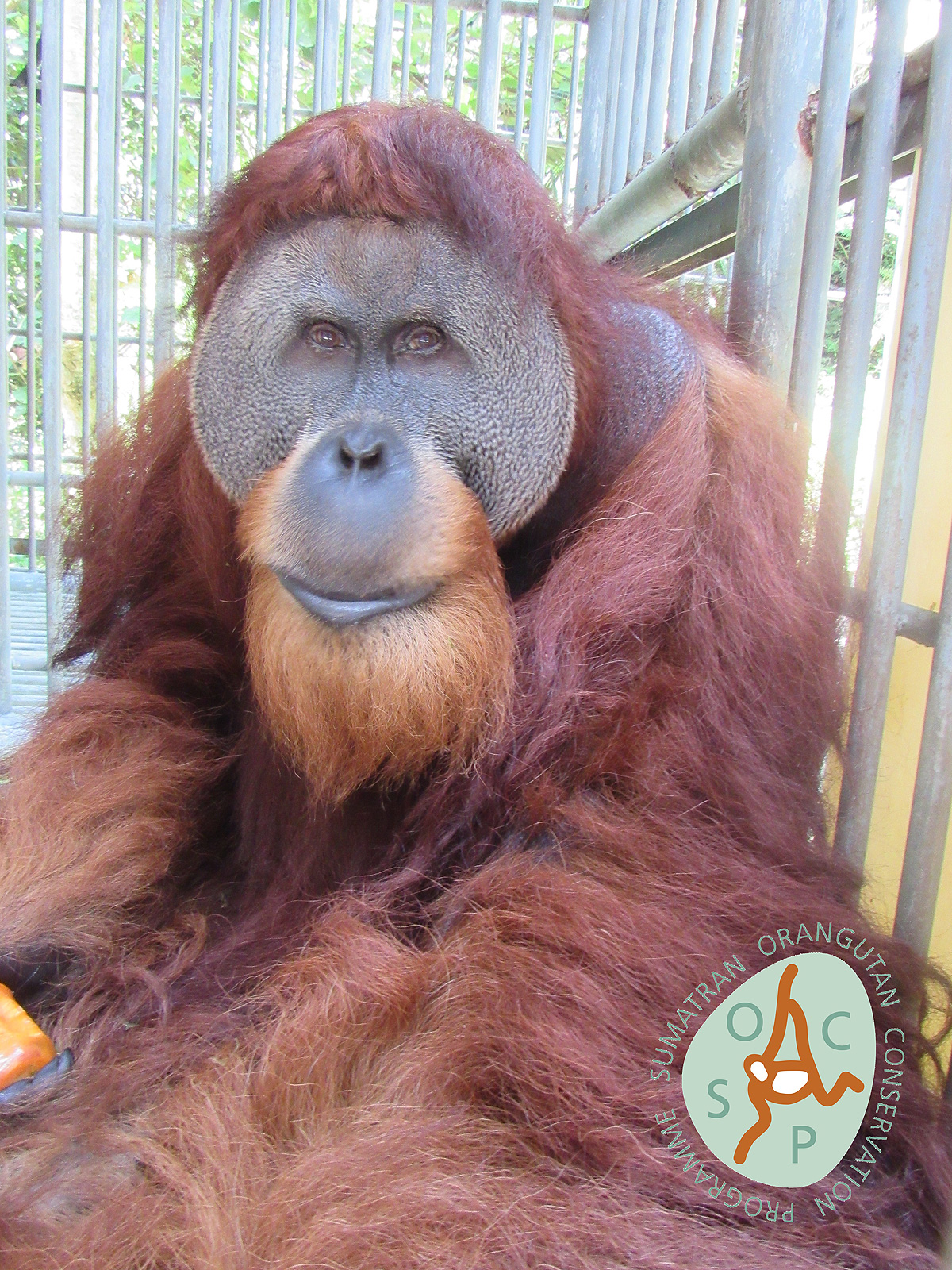 Krismon is an adult male Sumatran orangutan who is estimated to be around 20 years old. He was confiscated on 30 May 2016 from a house in Kabanjahe, North Sumatera. Krismon is being housed at the SOCP Rehabilitation Centre in the permanent resident facility until the new Orangutan Haven sanctuary is ready for him. Fortunately there has been a lot of progress on the sanctuary!

Krismon is doing well and has not shown any new health problems. He does, however, still show a slight tremor in his jaw and lips. His legs are growing stronger and he is able to climb up and down with ease. This may not sound like much, but after spending nearly his entirely life sedentary... we are all thrilled with Krismon's improvement!

Krismon is housed next to an adult female orangutan named Dek Nong who suffers from a chronic arthritic condition and will also become a resident of the Haven once it is ready. They are separated by a closed sliding door so there is no direct contact, but the two of them have begun to have more frequent interactions. However, they aren't really showing much interest in close contact or companionship.

Krismon's caregivers provide him with enrichment several times a day in order to prepare him for living on an island in the Haven. The enrichment is designed to keep him moving and thinking as much as possible and exploring his environment. Vertical movement is critical for Krismon as he spent so many years without climbing due to the small cage in which he had been kept.

Daily enrichment also provides a way for Krismon's caregivers to assess his development and anticipate his needs once he moves to the Haven. Once there, he will have a lot more open space, including trees and privacy. It is important to continue with the introduction process with Dek Nong. Although they don't seem to want to interact for the time being, they have not shown aggression towards each other, which is a good sign.

Krismon spent his entire life alone. Until being rescued and brought to the SOCP quarantine, the only other orangutan he'd ever seen was his mother when he was an infant. Getting to know other orangutans will take time. Slowly getting to know Dek Nong will help Krismon later when it's time to adjust to live in the Orangutan Haven. In the Haven Krismon will probably not have contact with other big male orangutans, but hopefully later he can make friends with a female orangutan or perhaps some younger, unreleasable orangutans... Our goal is to determine what makes Krismon happy and to do our best to provide him with what it takes to give him a stress-free life.