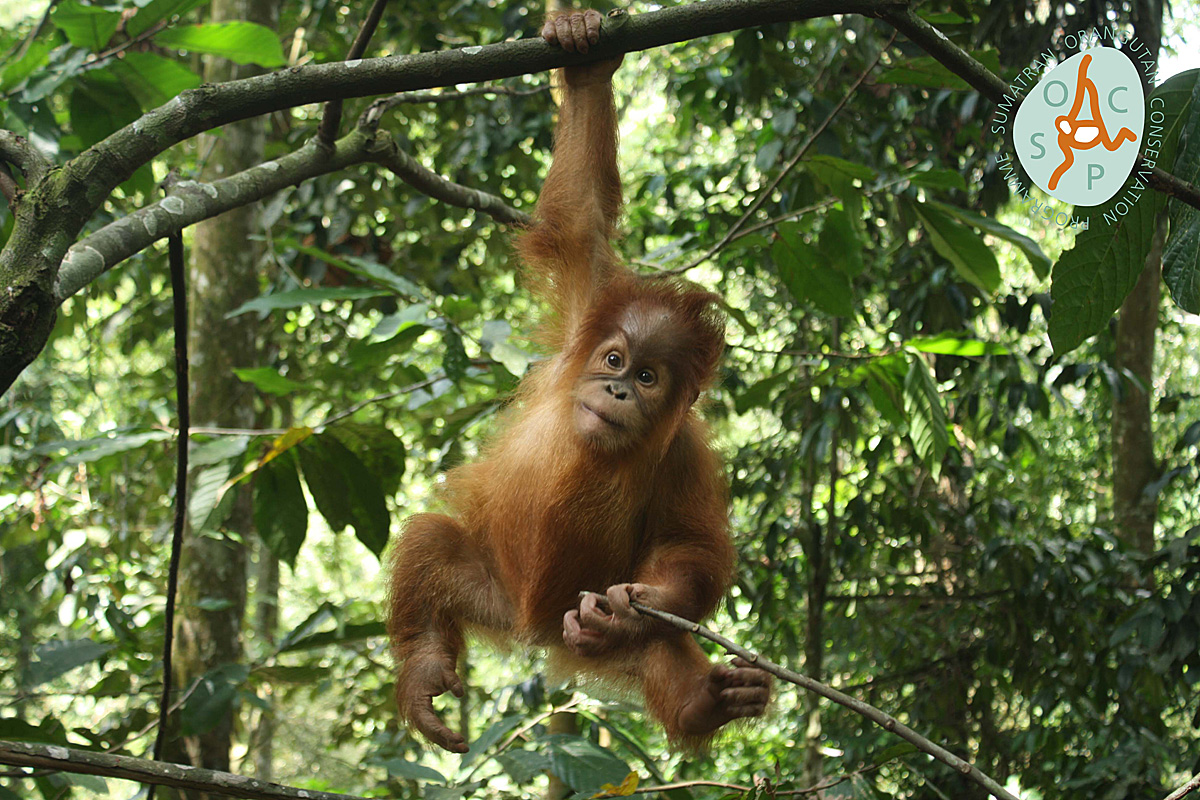 Click on each image to see it full size.

On the 12th of March 2019, an almost 4 month old orangutan-baby was brought into the SOCP rescue and rehabilitation station. The young female was named “Brenda”. She had been confiscated by the army from a farmer who claimed that Brenda had fallen from a tree, while her mother was fighting another orangutan. The army inquired where they could take the young and found the information about SOCP. The story about the fighting orangutan-mother seemed to lack credibility. To be clear, a mother orangutan will never abandon her infant.

Upon closer examination, the vets discovered a fracture in Brenda’s upper arm. At the same time, due to the famous case of a badly injured older female orangutan named Hope— who had been shot over 70 times and left for dead— a Swiss surgeon named Andreas Messikommer was due to fly to Sumatra to perform surgery on her. While there he took time to treat little Brenda’s fractured arm as well.

Brenda is still a baby and already suffered from a fractured upper arm. Like humans, baby bones heal very quickly. Therefore, Brenda was able to use her arm very soon for climbing. Initially, the team trained her with a self-constructed climbing frame in the inner area of the Baby House. Brenda proved to be very skilled at climbing and was soon allowed to give it a try in real trees. Usually, baby orangutans hold onto their mothers for 24 hours a day and are fed by them. Unfortunately, Brenda is an orphan and therefore needs to be cared for around the clock by her loving human carer as a substitute mom.

Brenda shows the typical behaviour of a healthy baby orangutan. She is curious, tries out as much as she can and sticks everything into her mouth that she can get hold of. If she wants something, for example attention or milk, she starts shrieking, whimpering and grouching. Thanks to the close bond she has with her caretakers, she is used to the daily business at rescue and rehabilitation center and accompanies them everywhere. This close relation is necessary. During the course of time, she will distance herself more and more from humans and be able to live an independent life in the wild. We are convinced that sweet little Brenda will turn into a secure, loving orangutan lady one day.

Brenda's perspectives for the future are positive. Her arm has completely healed and will not hinder her in climbing or other activities. When she is a bit older she’ll move from the 24-hour care into the Baby House where she can rampage and fool around with other young orangutans and begin to live with her orangutan cousins for the first time. But still, there is a long way to go until she is big enough to begin Forest School and be released. It will take at least five years, but we are confident that one day, Brenda will range the rainforest of Sumatra.

As of Summer 2019 Brenda was still under 24-hour care by keepers who share her room with her in the night to provide milk, but she is starting to grow more independent. She has her first big teeth now— starting with lower incisors and followed with the upper incisors about two weeks later. In April of 2019 the vets opened her cast to allow more flexibility in movement. She is using both hands very well. Before she finished her quarantine period she already played outdoors quite frequently. Brenda is able to climb trees (though remains quite close to the ground!) and her arms are already strong enough to hold onto branches.

As her teeth grow, she tends to bite objects she finds around her, this included an unknown fungus she found while in a tree. Vet Dr. Yenny quickly brought her to the clinic and put her on oxygen as she observed some difficulties with breathing swallowing. Brenda made a good recovery, but she had sores on her lips and tongue for several days before making a full recovery. This experience has not made her afraid or hesitate to bite and chew on trees - which is good for her to keep trying and learning!

In the Fall of 2019 Brenda officially moved into the Baby House. Her caregivers built her a special little area so she can play in a place away from the older orangutans that often bother her. However, Brenda absolutely loves joining the other orangutans to play! She is constantly trying to escape from her special area and move across the yard to join the fun in the real trees. Brenda loves to play with young orangutans like Ricka and Adji and she especially enjoys pulling or rolling with them.