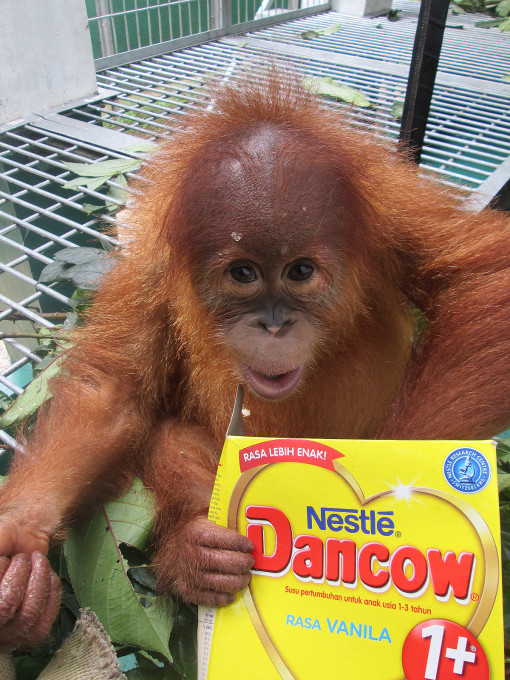 Megaloman has become an incredibly curious and independent young orphan over the past 6 months. He used to love hanging out with his best friend Bintang, but lately he prefers to follow his wild friends, Bina Wana, Cita Ria and Rambe.

Graduation to the new Socialization infant facility has been the best achievement from Megaloman! Over the past few months we have begun weaning the orangutans form night time milk feeds. They will eventually be fully weaned off milk and instead eat solid food. With 19 new arrivals to the facility in the past few months, space has become a major issue for all the babies. Many of the orangutans are now too big for the Baby House so they will be migrating to the larger socialization cages.

Over the past month, Mega has been attempting to make nests in the large metal nests using cardboard, giant burlap sacks and leaves. This is a great achievement and a vital skill he will need to know before returning to the forest for the next phase of rehabilitation.

Megaloman has decided that he doesn’t like being held by people anymore, which again shows his independence and confidence with his development. He is very good at extracting peanuts, jam and honey from the toy Kong balls and has started to try and open coconuts on his own. Mega also likes to play with Cece, one of most popular females in the group. She loves to play rough with Megaloman, and he loves to wrestle with her in the shade-cloth hammock.

Recent new group members Kiki, Koko and Rambe are all still very wild and will not go near people. Mega was extremely curious about them when they entered the group, and now he likes to copy what they do in the cage, following and learning how to be a small wild orangutan.