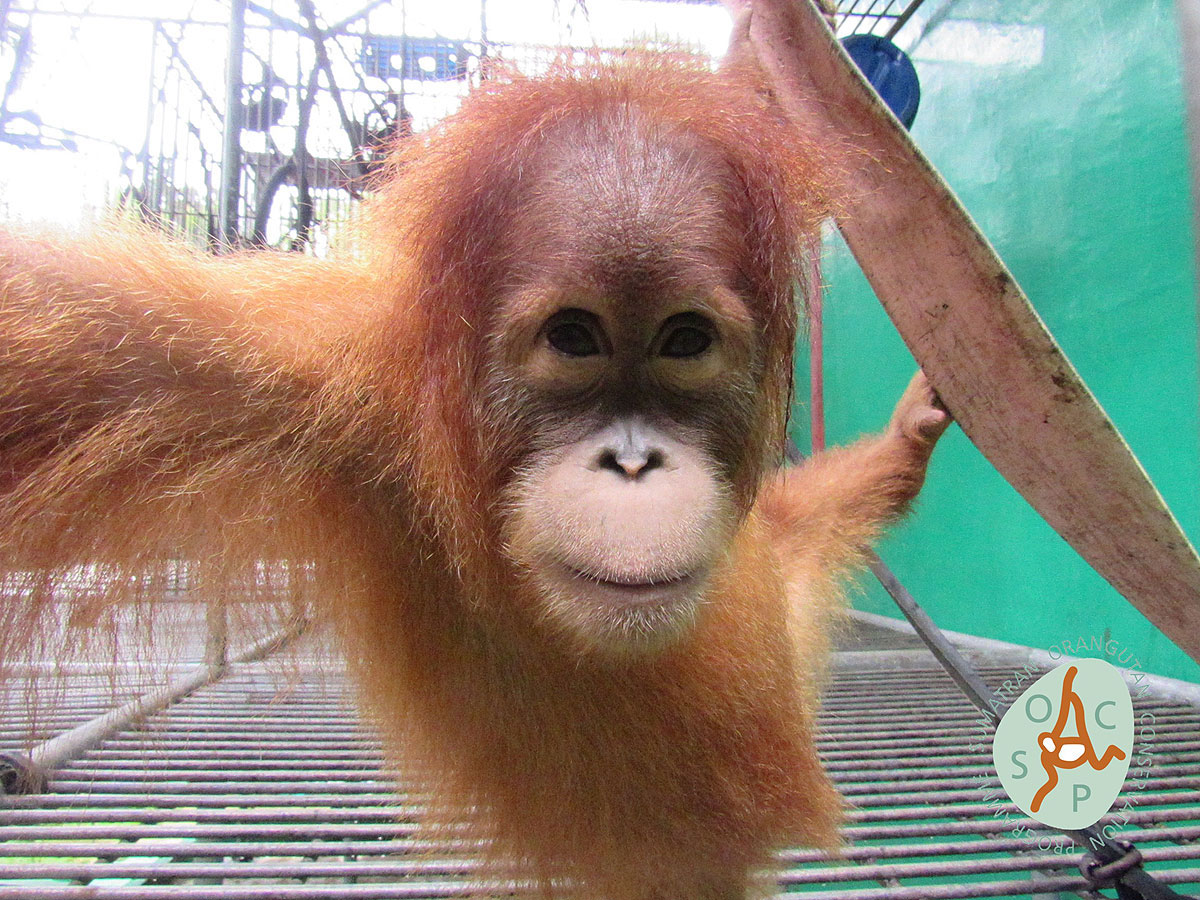 Megaloman is a young male orangutan who was confiscated from the illegal pet trade in Kutacane, Aceh Province. He was estimated to be only one month old when he arrived at the SOCP Rehabilitation and Quarantine Centre on 15 May 2014.

Megaloman is apparently very cute and lovable! While in the Baby Socialization Group some orangutans in the Young or Middle Group were clinging onto him too much, making it difficult for him to move around freely. He was recently moved to a new group and this is no longer an issue. The trick is to keep him in a group of orangutans who are roughly his own age.

Even in his new group Megaloman continues to be a bit of a victim of his own success, as other orangutans always tend to gravitate towards him. None of us know why this always seems to happen, but whenever he joins the Forest School group, his friends Teshi and Rory like to cling onto him all through the session. Bringing Mega out to the forest alone doesn't solve the problem, as then Teshi and Rory both act out and scream when they are left behind and, conversely, if Teshi and Rory are taken out then they often travel back to the cage so that they can be close to Megaloman!

The situation is made even more difficult by the fact that Teshi and Rory tend to avoid people and don't allow any sort of close contact, so it can be hard to get Megaloman free and clear of them. They apparently love him so much that they can't bear to let go of him! The caregivers are still keeping at it, though, for the good of the trio, and are managing to get them all out to the forest as much as possible, in whatever combination they can.

Even though he was taken into the illegal pet trade at a very young age, Megaloman has a solid set of forest skills. He can climb really well and does some rather nice foraging in the forest. His caregivers actually put him at the same skill level, or even higher, than slightly older orangutans like Sule, Bintang, Gokong or Siboy. We are doing our best to help them each through the rehabilitation process, so one day they can all be released back to the wild.

Megaloman does not have any health problems but his bodyweight has not changed in quite a while. In early Sept he weighed approximately 27 pounds, which is in the normal range for an orangutan his age, but we'd still like to see him pick up a bit more weight.

Megaloman needs to spend more time in the Forest School to keep on improving his knowledge and skills for a life in the forest. The staff needs to identify which orangutans will cling to him, and try to prevent this from happening in the sessions. Good luck, everyone!