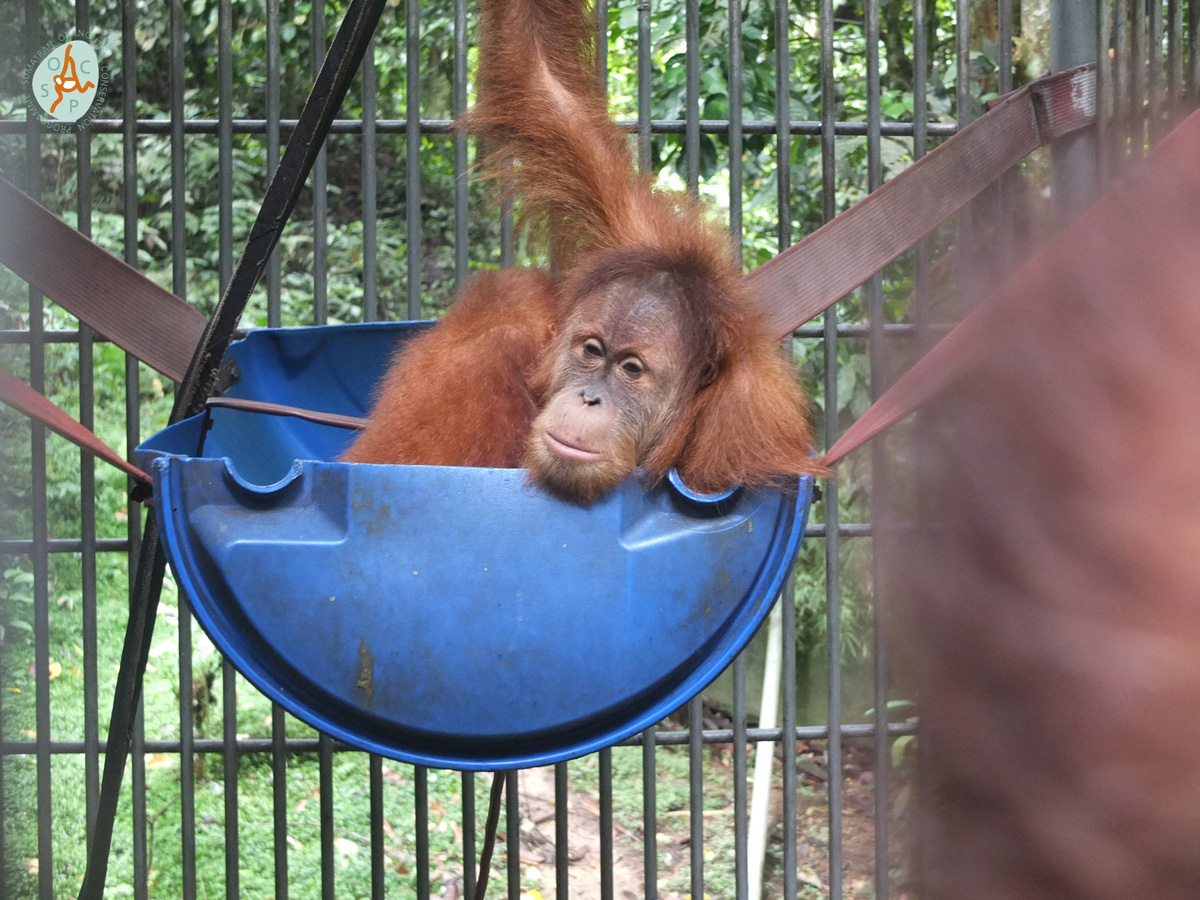 Megaloman was an infant male orangutan who arrived at the SOCP Rescue and Rehabilitation Center in May 2014. He was estimated to be only one month old when arrived from Kutacane, Aceh Province.

In the last update, we reported that Megaloman had been able to join Forest School again. In July and August, the COVID-19 pandemic in Indonesia became extremely serious with Indonesia seeing the highest rate of infection in Southeast Asia. It was necessary for SOCP to make the difficult decision to again pause some routine activities in order to minimize close contact with orangutans for safety reasons. This included temporarily closing activities in the Forest Schools. Considering the risk that coronavirus poses to orangutans and other wildlife this is a necessary mitigation measure for us to take at this time.

Not only have we had to pause Forest School, but all the SOCP staff who work directly with the orangutans have been divided into two teams who work separately. If any staff member tests positive for COVID then all the team members will be required to isolate for a certain number of days until they are confirmed negative. While one team is isolating the other team will take over all responsibilities.

Furthermore, adjustments to orangutan groupings were needed to create smaller groups in response to the COVID-19 pandemic risks. Small groups - known as epidemiological units – are easier to manage in the case of a positive case in an orangutan. To date we have had no positive cases.

Since the re-grouping, Megaloman has become very close to a younger female called Rika. They are always together and Rika clings to Megaloman when the staff approach their cage. When Forest School takes place, Rika is one of the orangutans that enjoys Forest School the most and would usually spend her time busily and independently exploring. She does not like to just hang around or play on the ground. She will climb high looking for food and sometimes builds a nest. However, in the cage she is very dependent upon Megaloman and will cling to him so much that sometimes it’s a hindrance to him. The SOCP team are closely observing the behavior and if it is deemed detrimental to either of them then they will be separated and better, more constructive friends found for them. Rika has, in the past, shown a strong dependency on other orangutans. The challenge for the SOCP team is to support Rika to become more confident and independent in the cage and not only in Forest School.

Megaloman has been healthy and active in this period. Keep up the great work, little man! 🙂