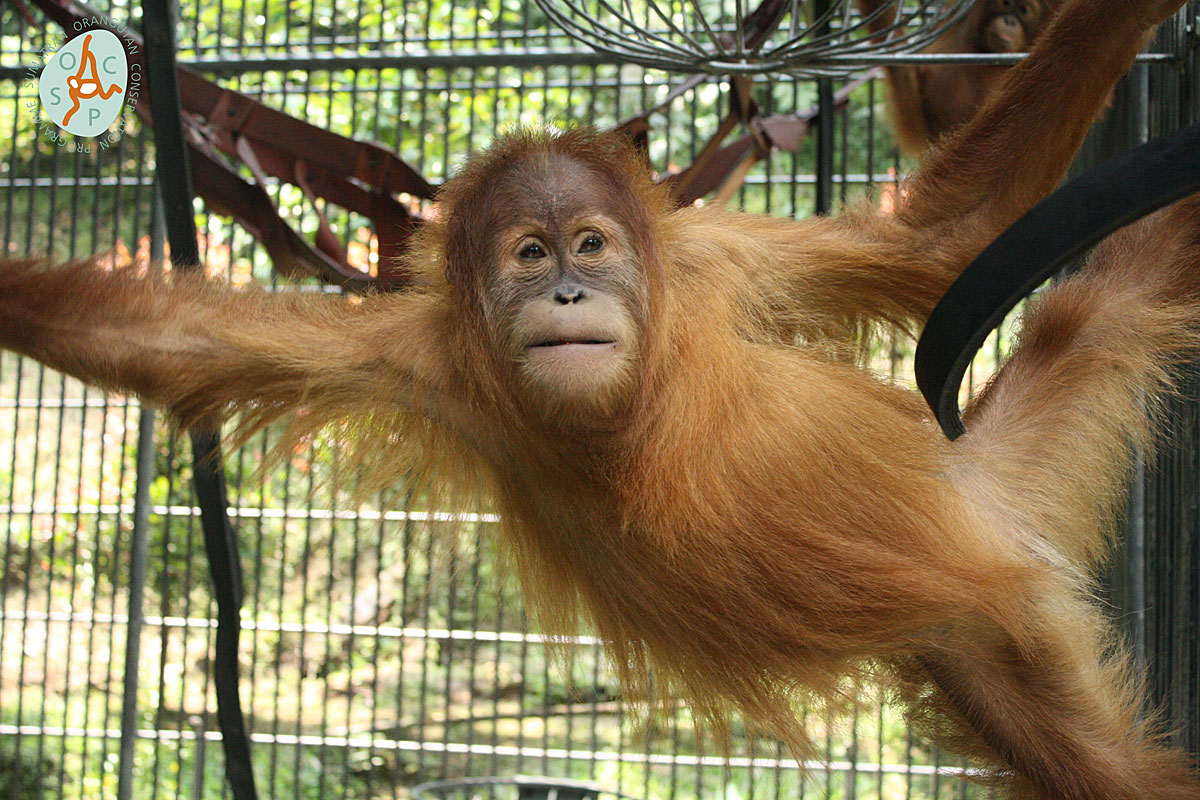 Megaloman spends the evenings in his Socialization Cage while most days are spent in forest school. (photos by Arista and Yanti)

Megaloman is an infant male orangutan who arrived at the SOCP Quarantine and Rehabilitation Centre on 15 May 2014. He was estimated to have been only one month old. Megaloman is a member of the Baby Group at the SOCP Socialization Facility.

At the end of 2018 Megaloman's caregivers decided that he was big enough to begin spending more time at Forest School. This would allow him to improve his arboreal skills and knowledge of a wild setting. Since then he has been doing really well and has taken to life in the trees. He has become one of the fastest moving orangutans at the center!

Megaloman loves swinging in the trees and he has mastered the ability to go down to the ground very quickly and climb again still at high speed. He still moves randomly and playfully rather than concentrating on certain aims such as finding forest food and learning about the forest layout. However, although he moves randomly it is clear that he has improved in identifying which branches and trees can hold his body so he now knows how to travel safely through the vertical and horizontal forest environment.

Megaloman in the Forest School

The less independent orangutans like Teshi or Rory are also now housed in the different areas than Megaloman, which allows him to move more freely as he doesn’t have these others clinging on him as before. Occasionally Sibring will still chase and then grab onto Megaloman, but since he can move faster he is usually successful at not picking up any ‘baggage’!

At feeding times Megaloman usually takes food with his feet and then climbs up high in the canopy. He generally stays away from others so he can enjoy his food in peace. He also tends to walk bipedal more frequently than the other orangutans at the station. As he spends more time in the trees we expect to see less of this.

Megaloman does not have any health problems. His bodyweight in February of this year was approximately 26 lbs (12 kg).

Megaloman's caregivers recommend that he spend as much time as possible in Forest School so he can continue to improve his climbing skills and increase his ability to live independently in the forest.