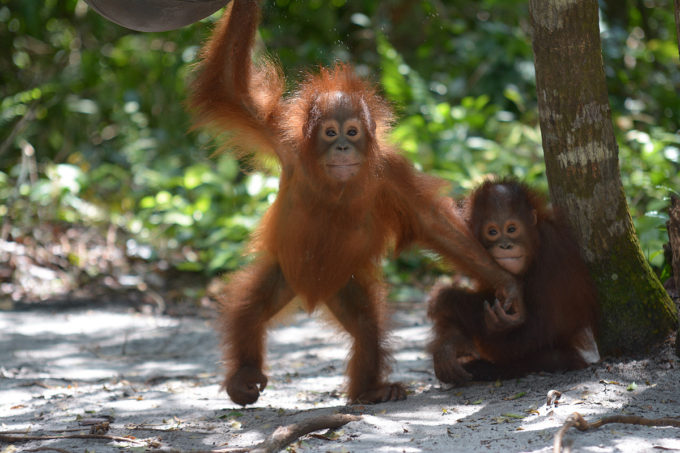 In late spring of this year, Meryl moved up from the small baby group into the bigger toddler group at Nursery Forest School. The big group is for those who are bolder and a little tougher. Meryl is definitely now one of the big girls!

Merytl's arboreal skills and courage to climb higher trees is getting better all the time. She also now looks fuller and stronger... and less like a baby! We are delighted to see how active and healthy she is right now.

After three months in the big group of the Nursery Forest School, Meryl has shown a lot more independence. She no longer needs so much attention from the babysitters, preferring instead to try new things on her own. She really seems to like doing everything by herself. This independence streak seems to be helping her developing skills such as climbing trees.

Of all the orangutans in her group, Meryl is the only one who is brave enough to climb a 5 meter tree! After playing in the trees all day, Meryl likes to rest in the enrichment swing. She even likes to take some twigs with her which she then uses to build into a couch-like nest.

The babysitters are always entertained by her cute way of doing things. Meryl definitely has a way of capturing the babysitters' attention.

She loves to hold onto branches with her feet and swing around with her head facing down. But she doesn't do this acrobatic move for nothing. It is the lanjung bag that she is always targeting. She performs similar acrobatics in order to grab the bottle of milk that is stored in the lanjung bag. Clever girl!

When the acrobat attempts fail and she is unable to make off with the bottle, Meryl will express her frustration by repeatedly throwing sand everywhere— including all over herself! Fearing that the sand might get in her eyes, the babysitters have been trained (by Meryl!) to give her the first sips of milk... way earlier than the rest of the orangutans!

Meryl loves all the fruit she is given by the babysitters such as rambutans, guavas and jackfruits. She may be small, but she is very clever! She always does her best to hide her fruit from the looting monkeys that occasionally appear in the play area. Meryl also loves to forage for local, wild-growing fruits such mesisins and ehangs in addition to the fruit she receives from babysitters.

Meryl is showing such wonderful progress! Keep it up!