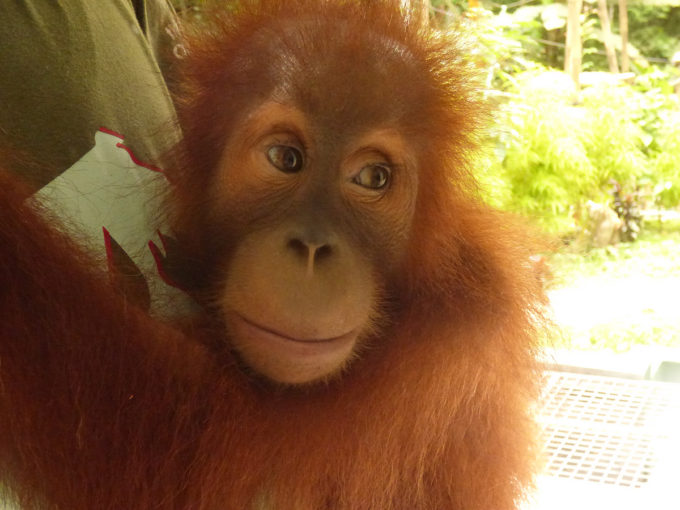 Nadya has been doing very well over the last few months! Recently, she moved into a new group with Siboy, Bulan, and Cut Lewis. This group was chosen as all the orangutans are around the same age, but are also quite wild and are rapidly developing the skills that they will need to live in the forest again— once they are old enough to be reintroduced. Nadya and Cut Lewis are the most "wild" members of the group, no longer depending on (nor interested in) their human caregivers for attention, although that does not stop them for being mischievous and causing problems! Siboy and Bulan are now taking after Nadya and Cut, which is what we had been hoping would be the case. In the future, we expect that Nadya will continue to be a role model for some of the younger orangutans who are in earlier stages of their rehabilitation. She seems to be a natural leader!

Nadya and her group members all recently received health checks from the veterinary team, which included weights and measurements, a routine blood draw, testing for tuberculosis, and receiving identification tattoos. Nadya passed her health check, being clear of any diseases or parasites! We are also happy to see that Nadya once again has begun to gain weight, and is now in the "normal" weight range for an orangutan of her size. Earlier this year, she was having a great deal of difficulty putting on and keeping weight, and required supplemental protein and feeds. Now, she is back to her normal feeding routine and is able to live in a group once again, which all of us, including Nadya, are very happy about! As you can see in the photos, Nadya is now starting to get quite large— and strong!

Nadya has been quite busy playing with her new friends, and stealing food and enrichment from them whenever she can. One of her favorite foods is coconut, which is also great enrichment! Nadya first has to try to break the coconut open, which can prove to be a difficult task for such a small orangutan. However, she never lets her size stop her! Nadya will often get the coconut opened faster than the boys, meaning that she is the first to get the best part of the coconut - the milk! She also enjoys spending time trying to work out how to get food from puzzle boxes and "kongs". Such activities keep Nadya busy in quarantine, but also teach her an important skill for survival in the wild: foraging. We are glad to see Nadya's improvement over the past few months, and look forward to seeing how she continues to learn and progress.