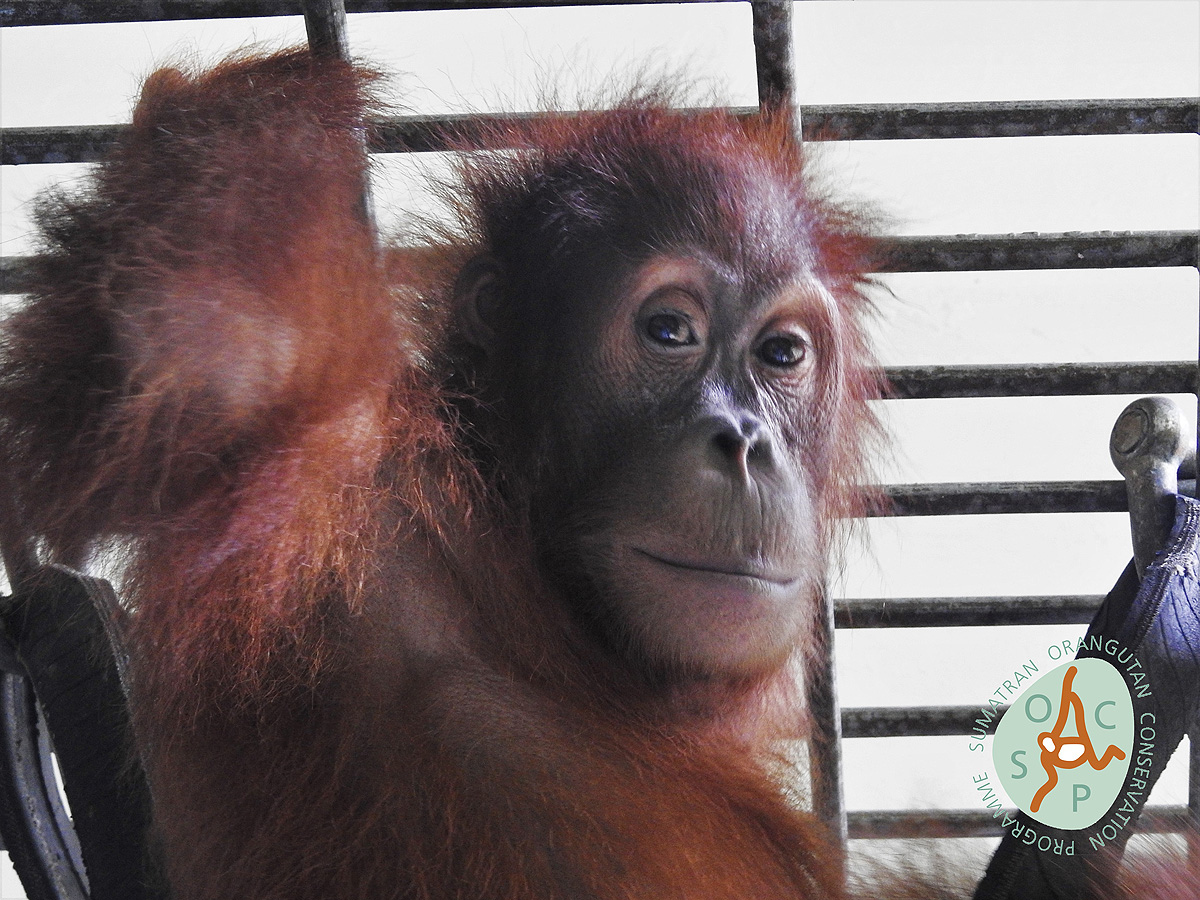 Nadya is a young female Sumatran orangutan who is estimated to have been just one year old when she arrived in SOCP Quarantine and Rehabilitation Centre. She was confiscated on 3 June 2014 by BKSDA Aceh in a joint operation with the Center for Orangutan Protection (COP) in South Aceh Regency. As of March 2018 Nadya was being held in an isolation cage along with her friend Bulan in preparation for being transferred to Jantho for Reintroduction to the wild in March!

Nadya is good candidate for more a complex Forest School setting (i.e larger area, higher and bigger trees, more variety of plant species and forest fruits). She is currently stuck in the Socialization cages because she is considered too wild to be brought in the current Forest School area. Continued rehabilitation in the wild will enables her to learn forest survival skills and enable the staff also to assess whether she is ready to be fully released and independent. Until such time she will be monitored intensively, and receive supplemental food as necessary, to ensure that she remains healthy and is progressing to again live a wild life free in the forest!

In our last update you may recall that Nadya was able to easily climb tall trees and move quickly in the forest canopy. She also made nests daily inside her night cage with leaves provided by the keepers. Most of the staff believe Nadya is still a "wild" orangutan since she avoids people— including her keepers!— whenever they approached her. Since she never wanted to come close to the staff, Nadya didn't officially join the highest level Forest School group. On the rare occasion where she did join the group and leave her cage, she would bolt up into the high canopy and not come down. In general Nadya was too difficult to handle and the keepers did not want to risk her staying in the canopy and getting injured if she managed to leave the quarantine. There are human villages and settlements throughout the region— all easily accessible for a determined orangutan!

With all this in mind, the SOCP team decided the best solution for Nadya would be to take her to Forest School in the Jantho reintroduction forest as soon as possible. Once in Jantho, Nadya will be able to quickly begin to learn forest survival skills in a larger, complex forest, but still have the possibility of coming back to the SOCP base camp for safety, food and rest. In Jantho, she will be followed by the SOCP Post Release Monitoring team. This is an ideal situation for an orangutan like Nadya. She will be able to take her time learning the skills necessary to live in the wild and spend time 'training' with the other orangutans who have already been released.

Bulan has been Nadya's best friend from the time they both arrived at the quarantine. Their age and body weight also quite similar. As with Nadya, Bulan is also not so easy to handle outside the cages and has not been able to join the upper level Forest School group. Bulan and Nadya have thus been scheduled to be transferred together to the reintroduction site.

As part of the transfer process to Jantho, Nadya had to pass a comprehensive final health test. The vet team performed the tests in mid February and since then Nadya has been isolated from the rest of orangutans at the SOCP Quarantine.

The test results came back perfect and as far as her health is concerned, Nadya is ready to be in the forest. Her body weight is 14.75 kg (32 pounds) which is normal for her age. Based on her dental record (her incisor teeth have already been replaced by her permanent teeth) we now believe that Nadya is actually more than 5 years old— possibly as old as 7— all the more reason to get her out into the forest as soon as possible!