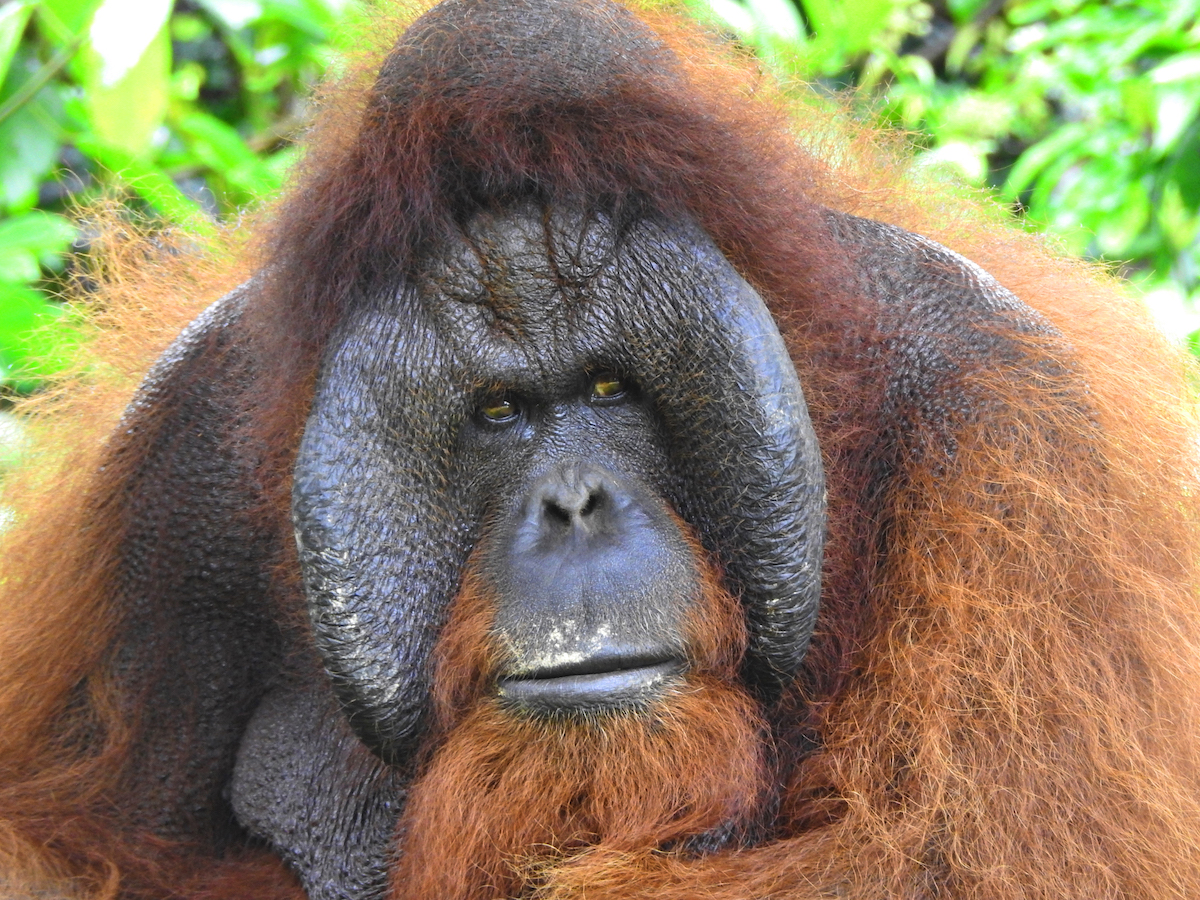 Papa currently lives on one of the man-made islands at Samboja Lestari and is easy to spot, as he prefers to stay out in the open rather than hidden away. We can always find him either on the side of the island across from the clinic or dangling on a nearby enrichment structure.

Papa isn’t bothered by the veterinary staff, surrogate mothers, or technicians that walk past the clinic or observe him from afar. This makes it easy to collect data on his behavior and monitor his progress, as well as keep tabs on his dental health.

Nobody thought Big Papa could be this chilled out!

In September, after having one of his teeth extracted by the veterinary team, Papa was unable to chew solid food for a while. The animal welfare team provided him with soft food, such as boiled tubers. Fortunately for us, Papa is not a picky-eater and he did not mind eating the limited choice of food while he recovered.

After a few weeks, the veterinary team started to see a change in Papa. He no longer had difficulty chewing. Gradually, the team added different textured foods to the menu, starting with tomatoes, cucumbers, eggplants, and raw tubers. Papa was also getting back into the swing of things with his foraging, by chewing leaves or gnawing the bark of trees on the island.

Seeing Papa's positive development, the enrichment team started giving him his favorite food-based enrichment items - bamboo tubes filled with mashed fruit and nuts, and wooden blocks filled with honey. Papa, without hesitation, cracked the hard enrichment items open with his teeth to extract the honey and nuts from within. When Papa started doing this, we knew his teeth and jaw had returned to normal.

One day, we saw Papa with Vera, an adult female orangutan on Island #4. We had never seen Papa like this before, as he generally avoided socializing with the three females that live on the island with him. Usually, they would only meet at the feeding platform to collect their share of food after it was delivered by the technicians and before going back to avoiding one another. But on this particular day, Papa and Vera ate together under the feeding platform, which was quite an unexpected interaction!
Over the next few days, Vera began approaching Papa more at his favorite hangout place. They would spend time side-by-side on the enrichment structures or explore the island together, foraging for natural food. However, by the end of the day, Papa would be back to exploring the island on his own, without Vera. He would also rest in this favorite corner of the island, alone.

We are delighted to see Papa's progress and newly developed social behaviors. We hope this is a good start for him and that he will get to know all of his fellow Island #4 residents.

Papa Gets to Know the Girls!

Papa's life on Island #4 in Samboja Lestari is getting more interesting to observe. When he was first placed on the island with three females - Vera, Isti, and Citra - he didn't seem to be interested in hanging out with his fellow inhabitants. But a few months ago, and after more than four years living on the island, he was suddenly seen spending time with Vera. Papa didn’t seem to be trying to get close to Vera, but also didn't reject her presence or move away from her.

Recently, when the technicians arrived at the island to deliver food, they couldn't find Papa on his favorite part of the island, nor at the feeding platform. They only saw Isti, appearing from behind the tall bushes, approaching them. When the technicians called out Papa’s name, a loud noise was heard coming from the gazebo in the center of the island. Papa was there, accompanied by Vera and Citra!

After realizing that the technicians had arrived, Papa climbed down from the gazebo and headed to the feeding platform to collect food. He then wandered around the island, ate leaf buds, and eventually stopped to rest in a corner of the island. He watched our technicians and veterinarians walk back and forth across the creek before finally falling asleep.

Orangutans have a wide home range: An adult female will typically cover a stable home range of about 9 km2, while an adult male can roam well over 25 km2. Since the range of males may overlap the territory of several females, adult males like Papa tend to be more nomadic; they will visit a female's territory as needed and are intolerant of other adult males sneaking into their home range.

The more dominant of male orangutans will often let out a roaring sound known as a ‘long call’, to mark their territory and scare off any intruders. This is why Samboja Lestari’s islands are designed to accommodate just one adult male, accompanied by a few females. This ratio helps the male and females on each island exhibit proper social interactions. Even though Papa is classified as an ‘unreleasable’ orangutan, it is still important for his natural behaviors to be honed and respected.

We are proud of you and your progress, Papa! 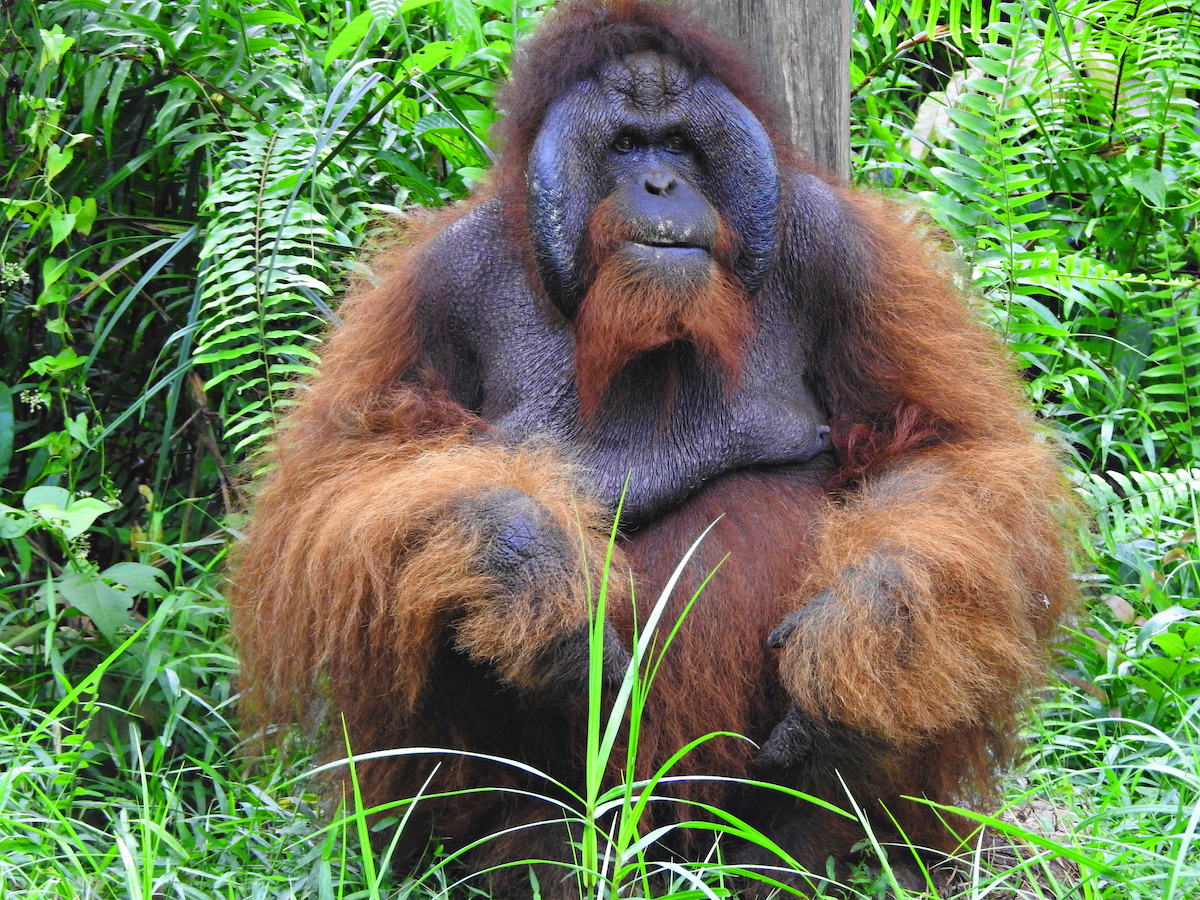