August 1, 2019 — In commemoration of World Nature Conservation Day, which falls annually on 28 July, eight rehabilitated orangutans will be returned to their natural habitat thanks to a collaborative effort between the Borneo Orangutan Survival Foundation (BOSF), the Central Kalimantan Natural Resources Conservation Center (BKSDA), the Bukit Baka Bukit Raya National Park (TNBBBR) Authority, and USAID LESTARI. Here are the profiles of the eight lucky orangutans. 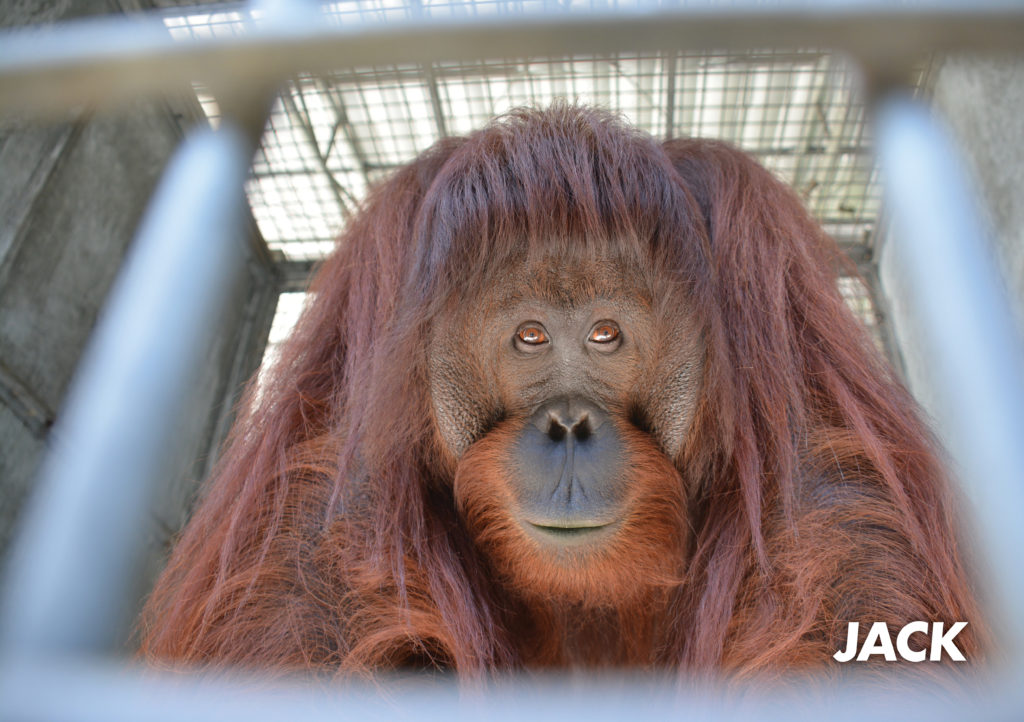 Jack was rescued from a resident of Banjar Baru, a city in South Kalimantan, on 7 April, 2004. He arrived at Nyaru Menteng at the age of two and weighed 5.8 kilograms.

After completing quarantine, Jack joined Forest School where he worked his way through every stage. On 3 November, 2016, he was transferred to the Salat pre-release Island to undergo the final stage of rehabilitation. During his stay on the island, Jack further developed his survival skills and became an avid explorer. Jack also made friends with a female orangutan named Sisil – who was released in September 2018 – and together, the pair enjoyed foraging and exploring the island.

After more than a decade of rehabilitation, 17-year-old Jack is ready to reunite with Sisil in the wild forests of Bukit Baka Bukit Raya National Park. 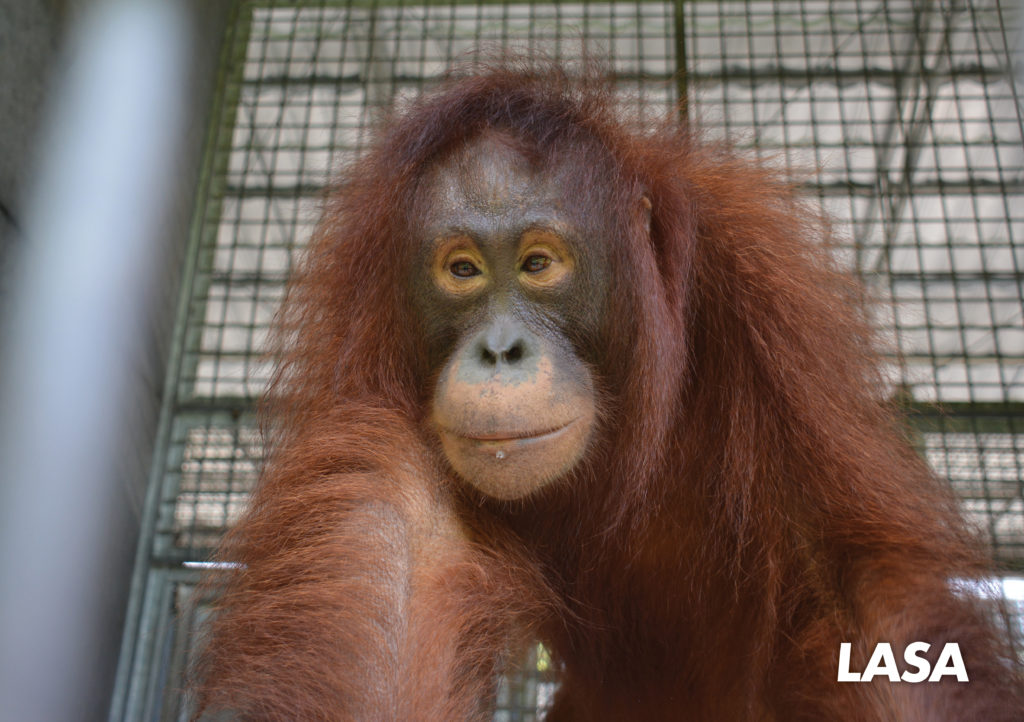 Lasa and his mother, Mama Lasa, were flown to Central Kalimantan on 7 August, 2007, from the Cikananga Wildlife Rescue Centre, West Java. The mother-infant pair arrived at Nyaru Menteng when Lasa was only five months old.

Given the advanced age of Mama Lasa, the pair immediately qualified to be placed on a pre-release island. Before being released onto the islands, they were first housed in the quarantine complex to ensure that they were healthy and posed no risk to the island population. On 13 May, 2014, Lasa and Mama Lasa were taken to Palas Island, but were later moved to Bangamat Island on 19 April, 2018. On the islands, Lasa rapidly developed his independence and mastered all the skills required to live in the wild.

Now a handsome 12-year-old with narrow eyes and a wide forehead, Lasa will soon be exploring his new home in the Bukit Baka Bukit Raya National Park, where he will live as a true, wild orangutan. 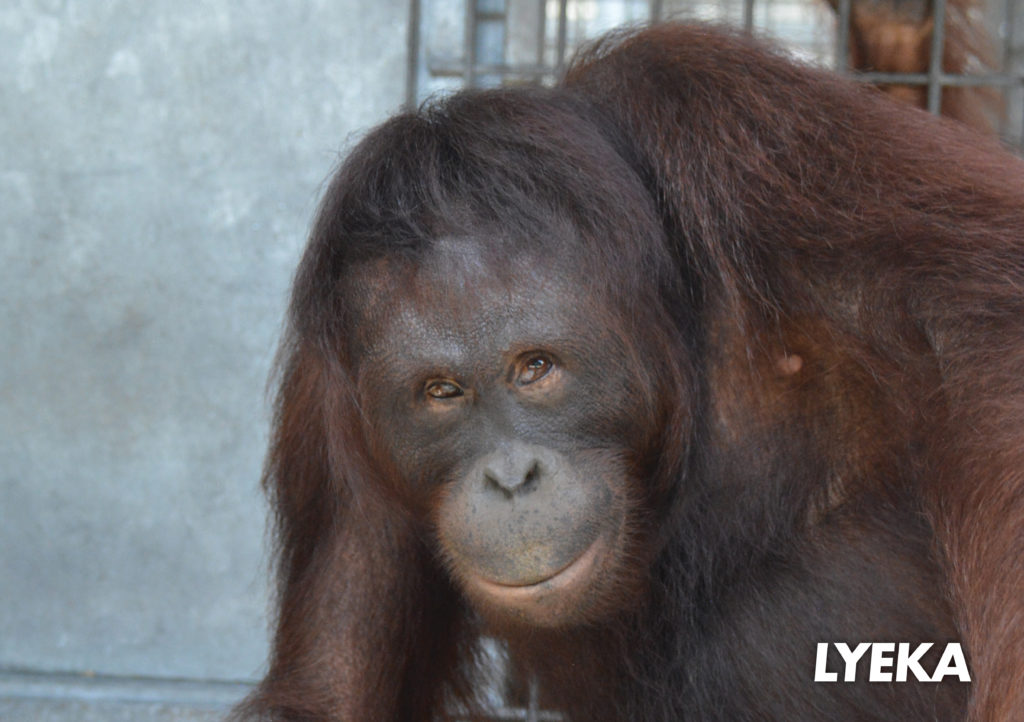 Lyeka was rescued by a joint team from BOS Foundation Nyaru Menteng and the Central Kalimantan BKSDA, from Pangkoh village in Pulang Pisau Regency, on 21 July, 2008. She arrived at Nyaru Menteng at the age of 10 months and weighed 4.2 kilograms.

Lyeka completed her Forest School training and proceeded to the Salat pre-release island on 4 November, 2016. There, she became known for her alertness and dislike of humans.

Lyeka is now 12 years old and, after 10 years of rehabilitation at Nyaru Menteng, is ready for new adventures in the forests of the Bukit Baka Bukit Raya National Park. 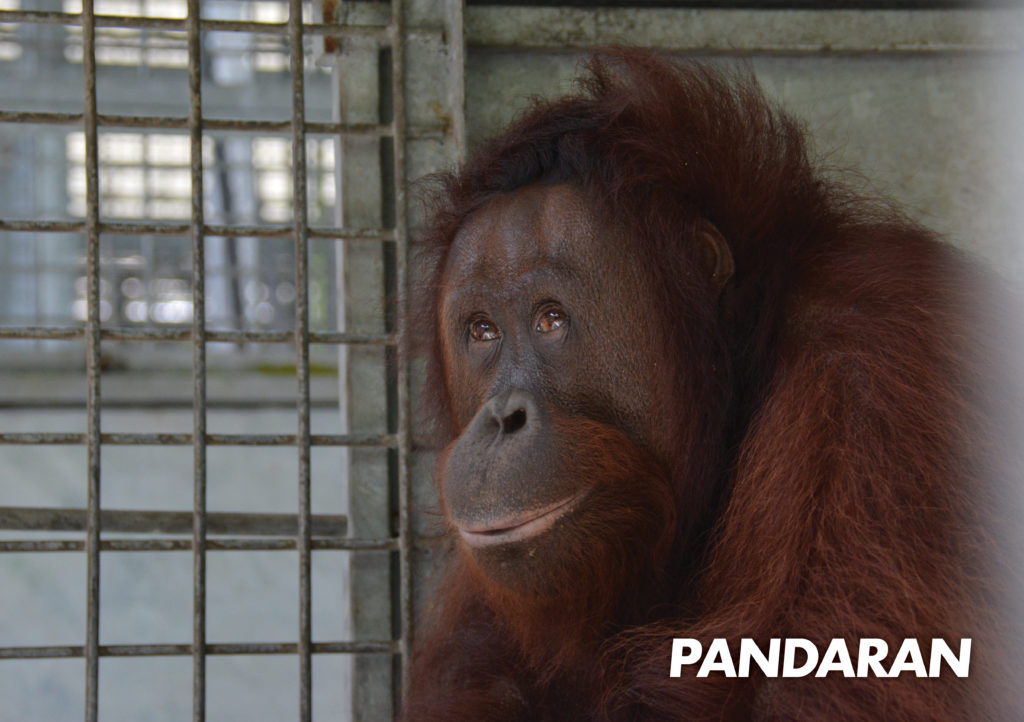 Pandaran was rescued from Sebangau, Pulang Pisau Regency, Central Kalimantan. She was two years old and weighed 6.8 kilograms when she came to Nyaru Menteng on 8 February, 2006.

After passing quarantine and completing the rehabilitation process in Forest School, Pandaran was transferred to Palas pre-release island on 17 May, 2014, and then later moved to Kaja Island on 19 April, 2018. During her time on the island, Pandaran grew into a loner with a surprisingly gentle nature. She also proved herself to be highly curious and a skilled forager.

Pandaran is now 16 years old and ready to enjoy true freedom in the forests of the Bukit Baka Bukit Raya National Park. 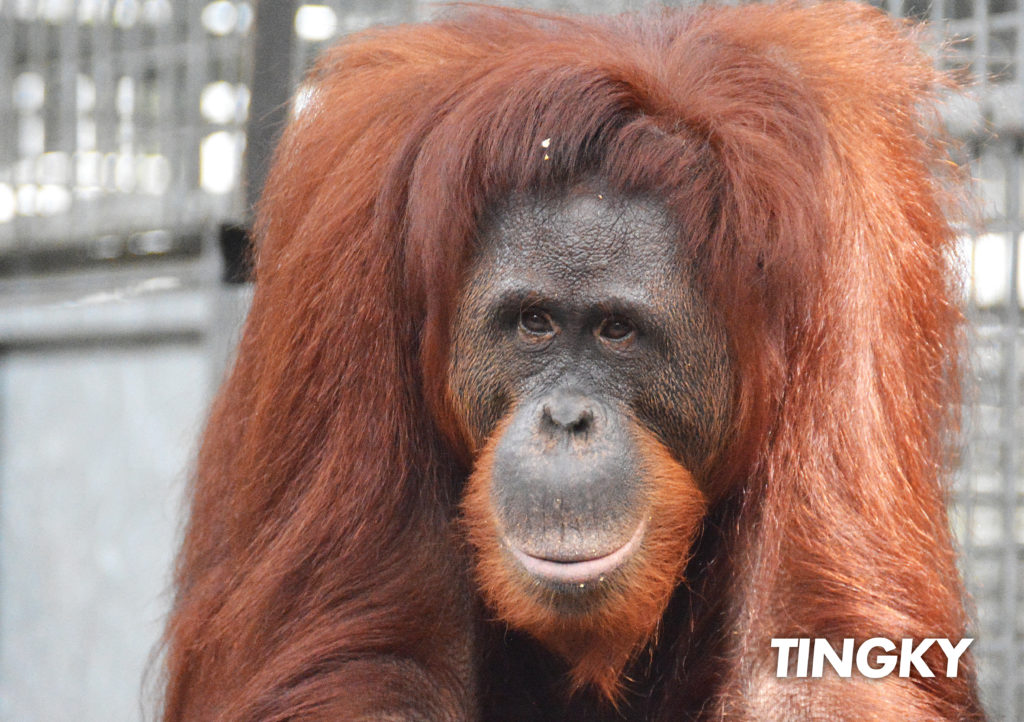 Tingky was rescued on 25 August, 2007, from a local villager in East Kotawaringin District, Central Kalimantan, who had kept her illegally as a pet. She came to Nyaru Menteng at 18 months of age and weighed 9 kilograms.

Tingky completed the quarantine, and then joined Forest School. After nearly a decade of rehabilitation, she proceeded to the pre-release stage on Salat Island on 5 April, 2017, where she further developed her survival skills.

Now 13 years old, Tingky is ready to explore the forests of the Bukit Baka Bukit Raya National Park as a true, wild orangutan. 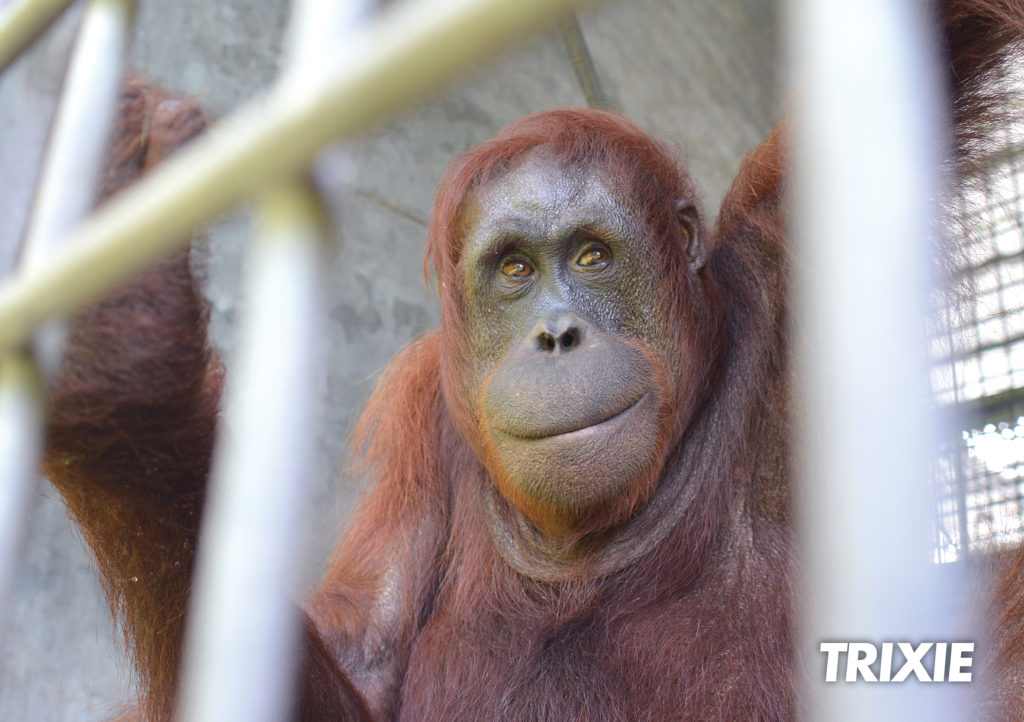 Trixie was rescued from a resident of Mentangai Hulu village, Kapuas, Central Kalimantan, on 10 August, 2007. She arrived at Nyaru Menteng at 18 months old and weighed 5.5 kilograms.

Trixie passed all stages of Forest School before finally moving to Kaja Island on 18 April, 2017. During her time on the island, curious Trixie adapted quickly to her new environment and developed a firm dislike for humans.

Trixie is now 14 years old and is ready to start her new life as a wild orangutan in the forests of Bukit Baka Bukit Raya National Park. 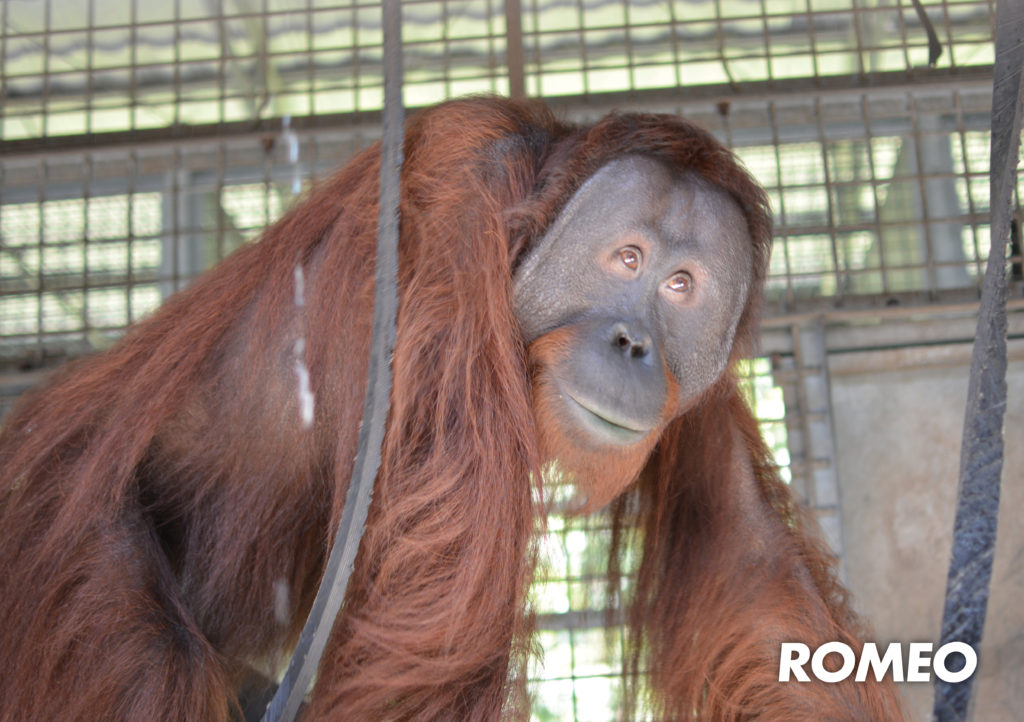 Romeo was rescued from captivity at the hands of a palm-oil plantation worker in East Kotawaringin Regency, Central Kalimantan, on 18 July, 2006. When he arrived at Nyaru Menteng, he was just five years old and weighed 16 kilograms.

After undergoing a mandatory quarantine, Romeo began honing his skills in Forest School, which he successfully completed on 4 November, 2016. He continued on to the final stage of rehabilitation on Salat Island, where he became a dominant male. On the island, he explored a huge range and would occasionally compete with another dominant male, Rizki. The two were known to exchange non-physical yet threatening communications whenever they met in the forest.

Romeo is now 18 years old and will soon experience a real, wild forest when he is released to the Bukit Baka Bukit Raya National Park. 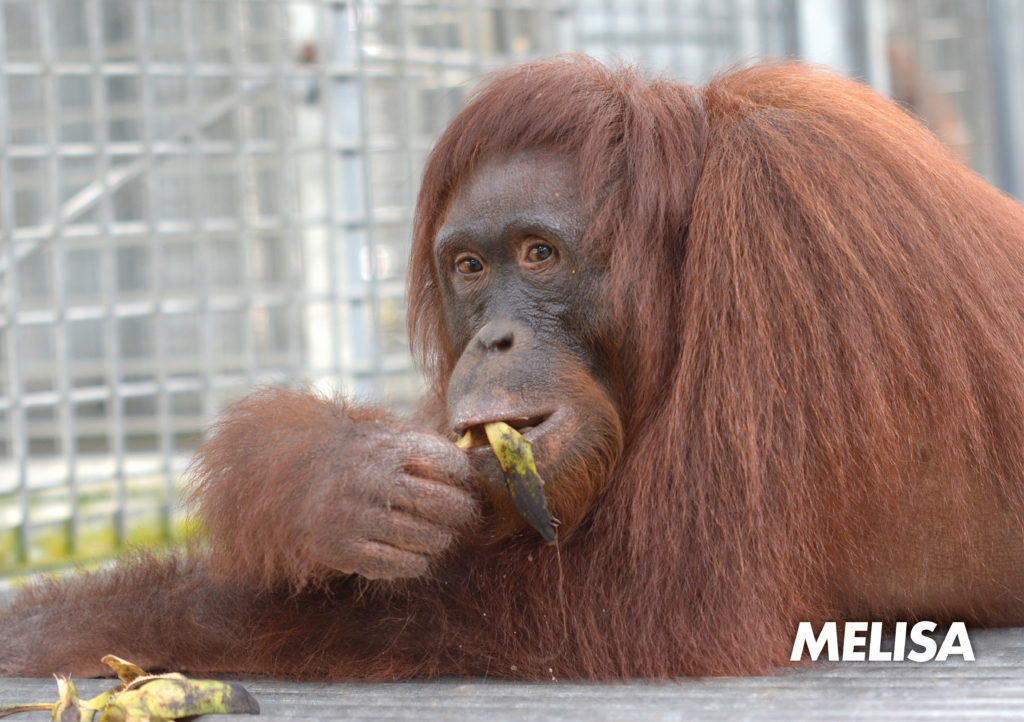 Melisa was handed over to Nyaru Menteng by the Forestry Police Unit (SPORC) on 21 July, 2010. At the time, she was 4.5 years old and weighed 9.8 kilograms.

Melisa underwent a period of quarantine before joining Forest School, where she quickly completed all stages. On 5 April, 2017, she was transferred to Salat pre-release island, where she was observed socializing well with other orangutans and exploring her environment.

After nine years of rehabilitation, 13-year-old Melisa has mastered the skills she will need to survive in the forest. Soon she will be enjoying her new life as a true, wild orangutan in Bukit Baka Bukit Raya National Park.