November 1, 2018 — In the six-and-a-half years since our first orangutan reintroduction in the Bukit Batikap Protection Forest, the majority of our released orangutans have ventured in search of new forests and adventures. It is common for an orangutan to leave our observation area and never be seen again. Once in a while, however, an old face makes a reappearance.

During the second set of releases in November 2012, 4-year-old Sifa was released together with her mother, Sif. The pair was followed regularly by our PRM team from Camp Totat Jalu up until 2015, when they mysteriously disappeared. At the time, we had concluded that they must have moved away to a forest area not monitored by our team. Then, in February this year, we were proven wrong when our team encountered Sifa! She had grown significantly and appeared to be blind in her left eye. Read more about Sif and Sifa here. 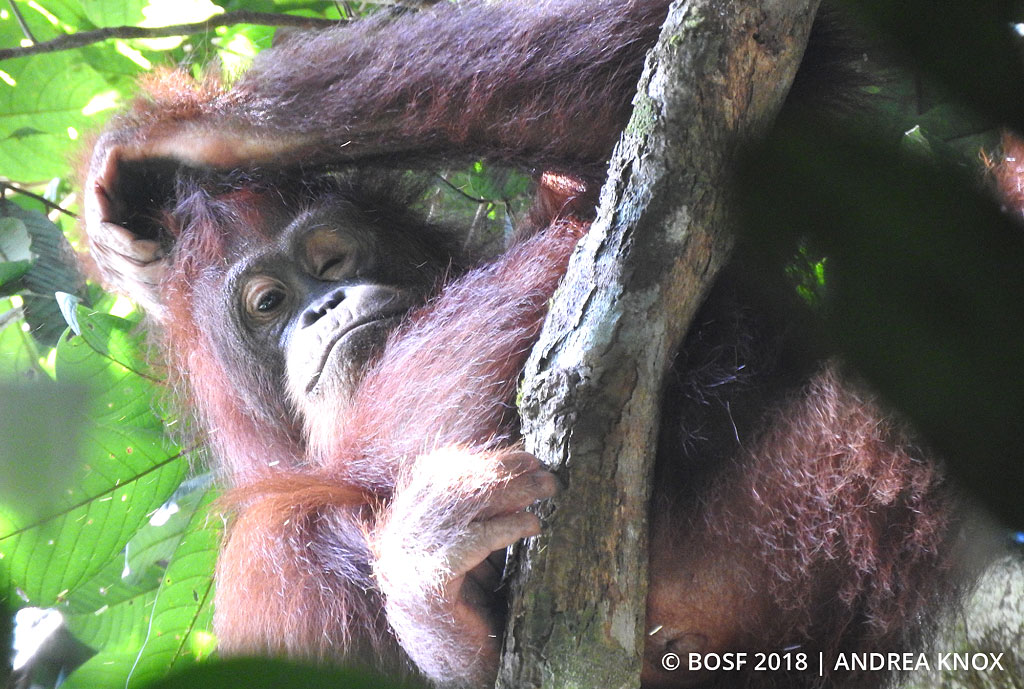 Now aged around 10 years, it is likely that Sifa was pushed away by Sif, who might have had another infant to care for. However, Sifa is not yet a fully mature adult, and despite proving herself as a confident and capable orangutan, she still likes to rely on others. During our observations, we frequently found her with Compost, an older female orangutan released in Batikap. Compost, a friendly and doting ‘foster mother’ to Sifa, readily shared all her food with the adolescent, and came running to her aid whenever she cried. It was heart-warming to watch the two interact together. 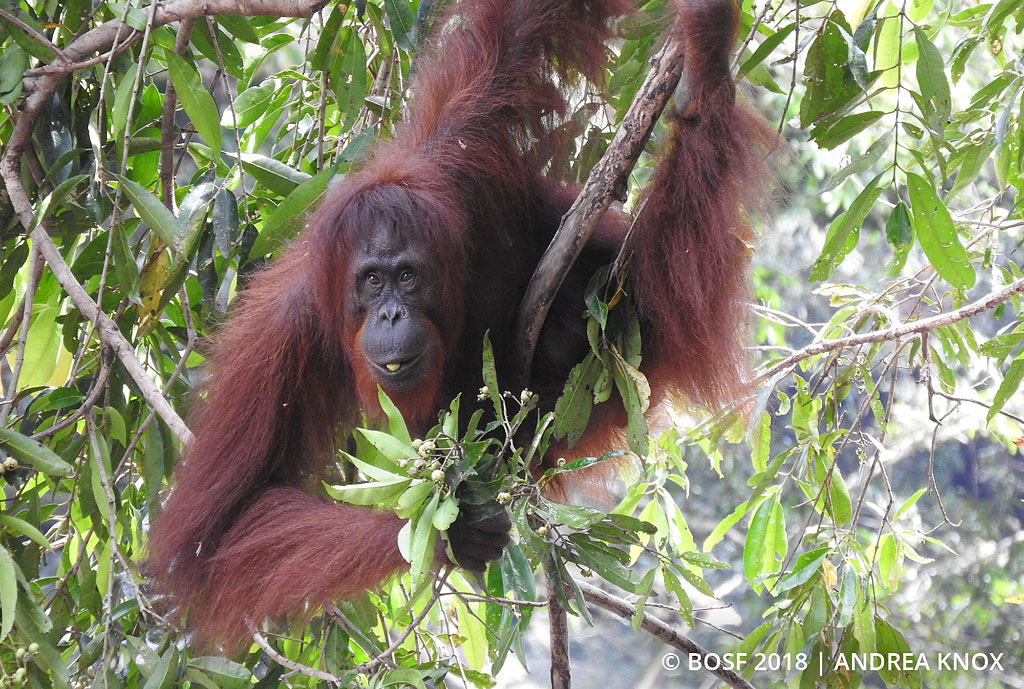 After six months of observing Sifa with Compost, we were shocked to see Sifa move off and leave Compost’s side. Then we discovered that Sifa was spending time with another female – Gina! While Gina is a tolerant individual, she seems to care little for the company of others. On several occasions we witnessed other orangutans approach Gina and, without fail, she completely ignored them. Cilik, a young male, once tried to mate with her, and she successfully fought him off. Despite her small stature, Gina has proven herself to be a fierce fighter. 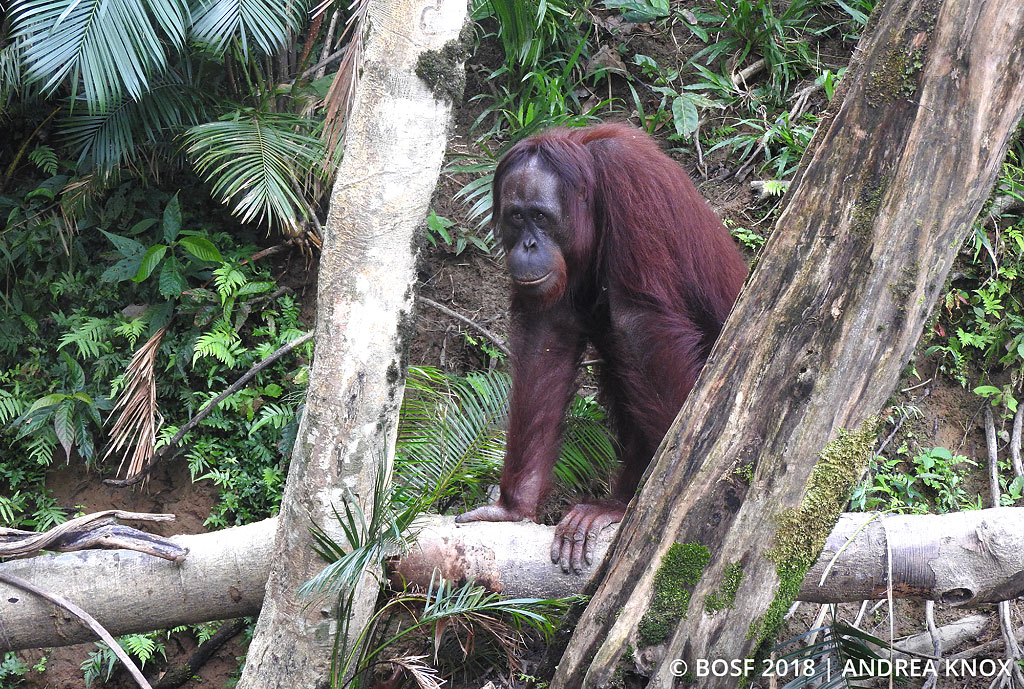 The first day we observed this odd couple, things went exactly as we expected; Gina completely ignored Sifa. We returned the following day, expecting more of the same, but were quickly proven wrong. Just minutes after our arrival, Sifa swung over to Gina and grabbed the top of her head. For orangutans, this is a classic invitation to play. Seconds later, the two engaged in a play-wrestling session, rolling all over the forest floor. Our hearts melted over the next 40 minutes while they played non-stop. We were forced to reassess our evaluation of Gina; Perhaps she would make a good foster mother after all? 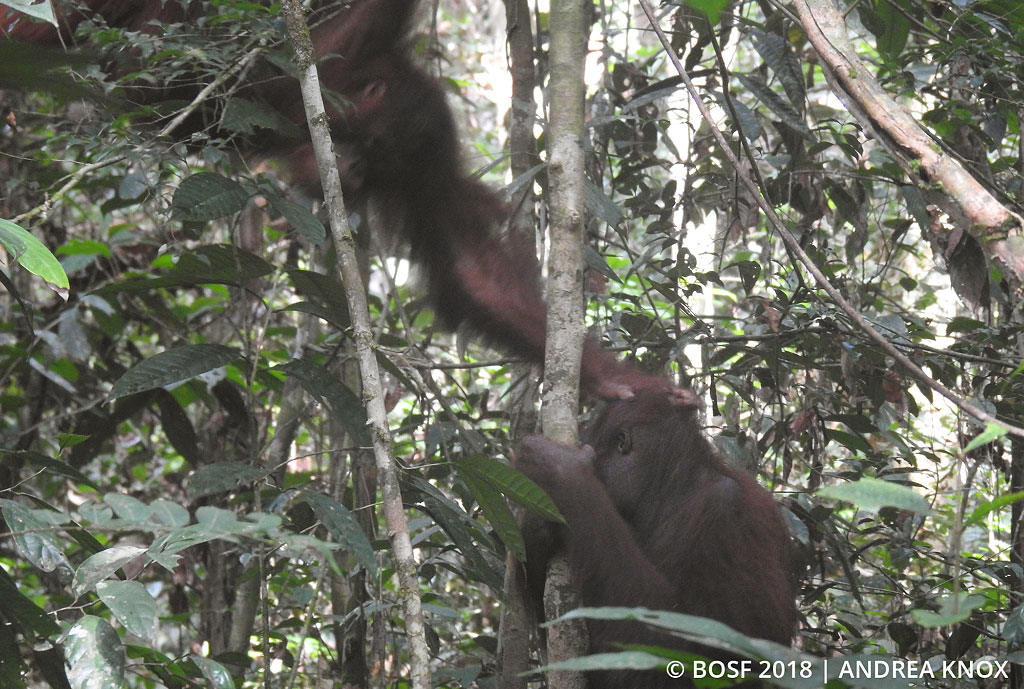 Sifa invites Gina to play with her

As the day went on, Sifa and Gina travelled through the forest together, making frequent stops to feed on Batikap’s smorgasbord of natural delicacies. In the afternoon, Gina found a large rotten tree full of termites. Using her immense strength, she broke off chunks of its trunk and started to feed. Smaller and weaker, Sifa began to beg Gina for some of her termites. At first, Gina just ignored her; but after Sifa persisted, Gina pushed her away so she could eat in peace. Sifa got the message and moved on to feed on some cambium from a nearby tree.

After a satisfying fill of termites, Gina re-joined Sifa. However, instead of foraging for food herself, Gina yanked the cambium out of Sifa’s hands and started eating it! Gina may not be the doting adoptive mother that Compost was, but it is obvious that Sifa still treasures her company... as long as there is enough food for the both of them!