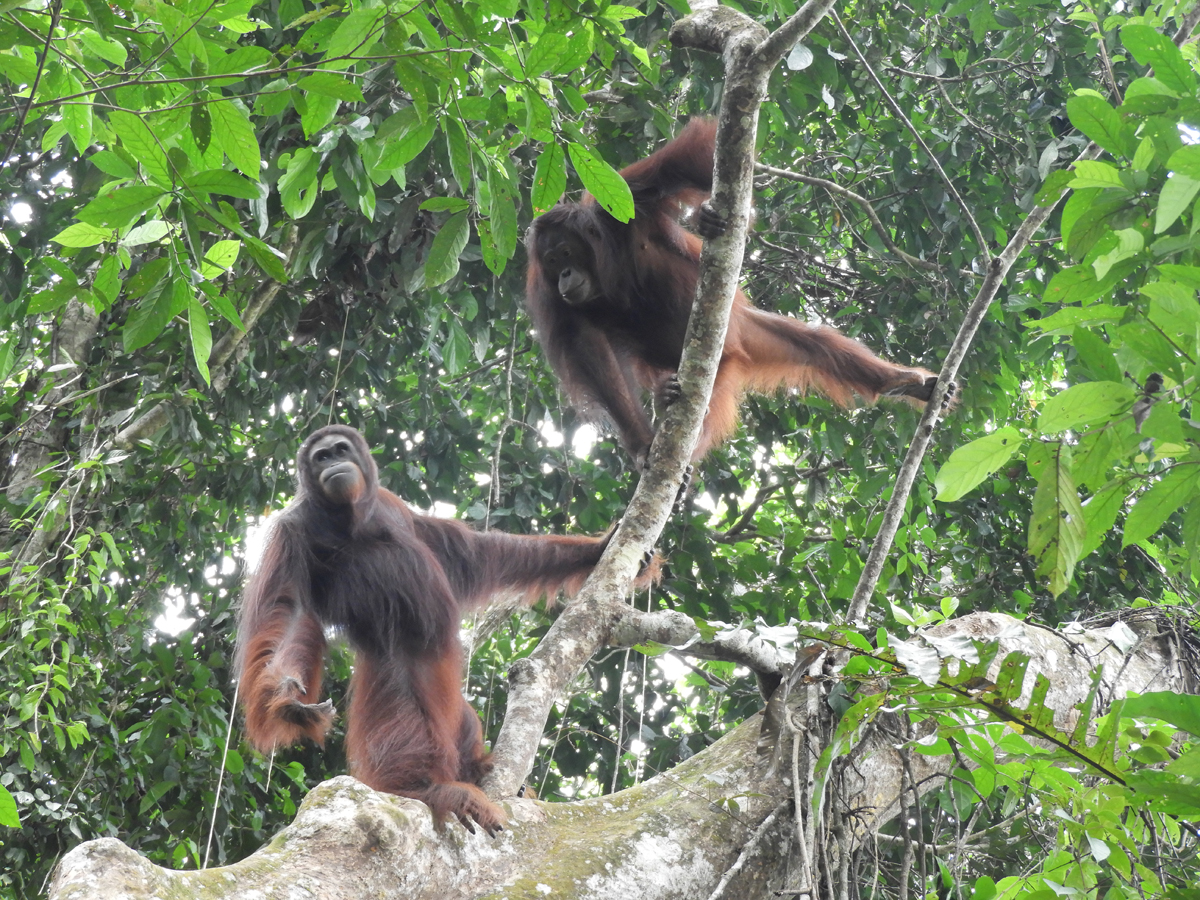 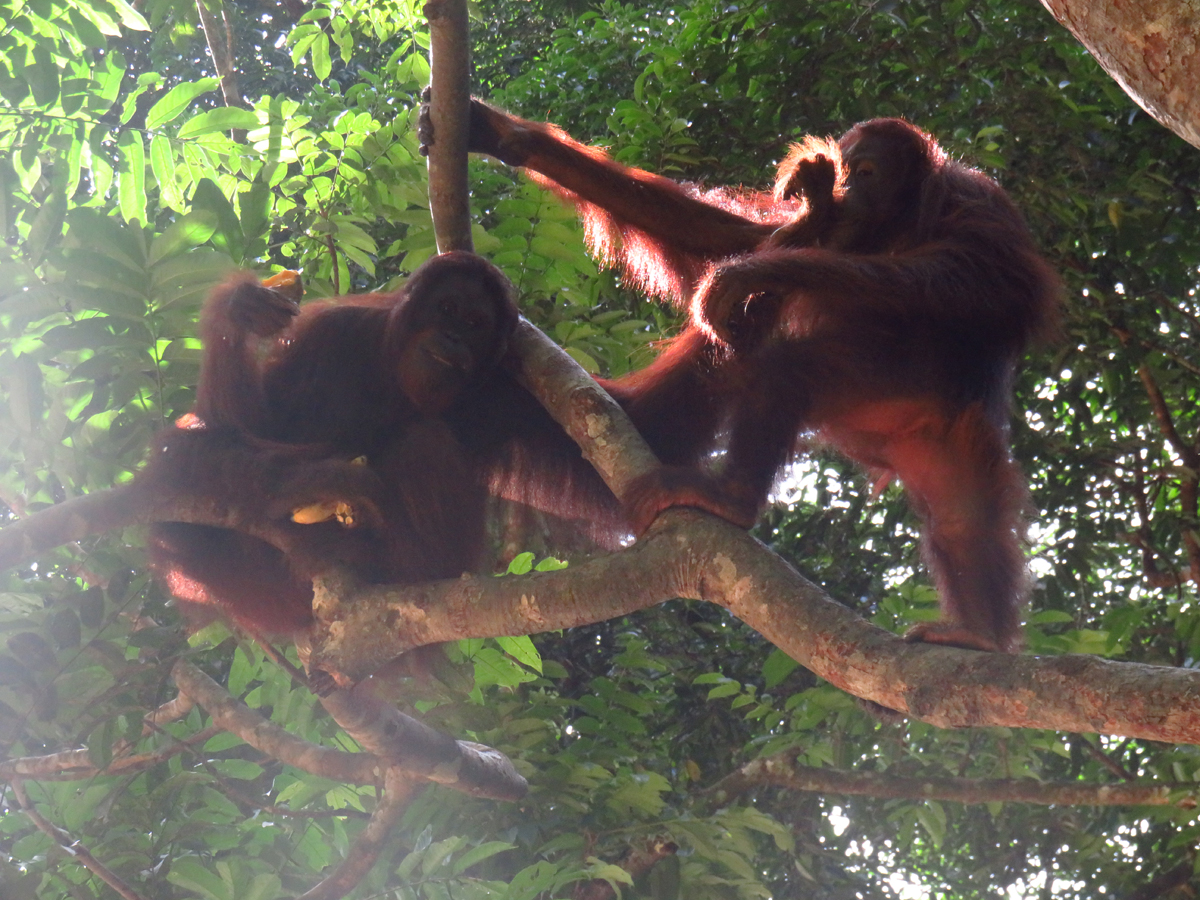 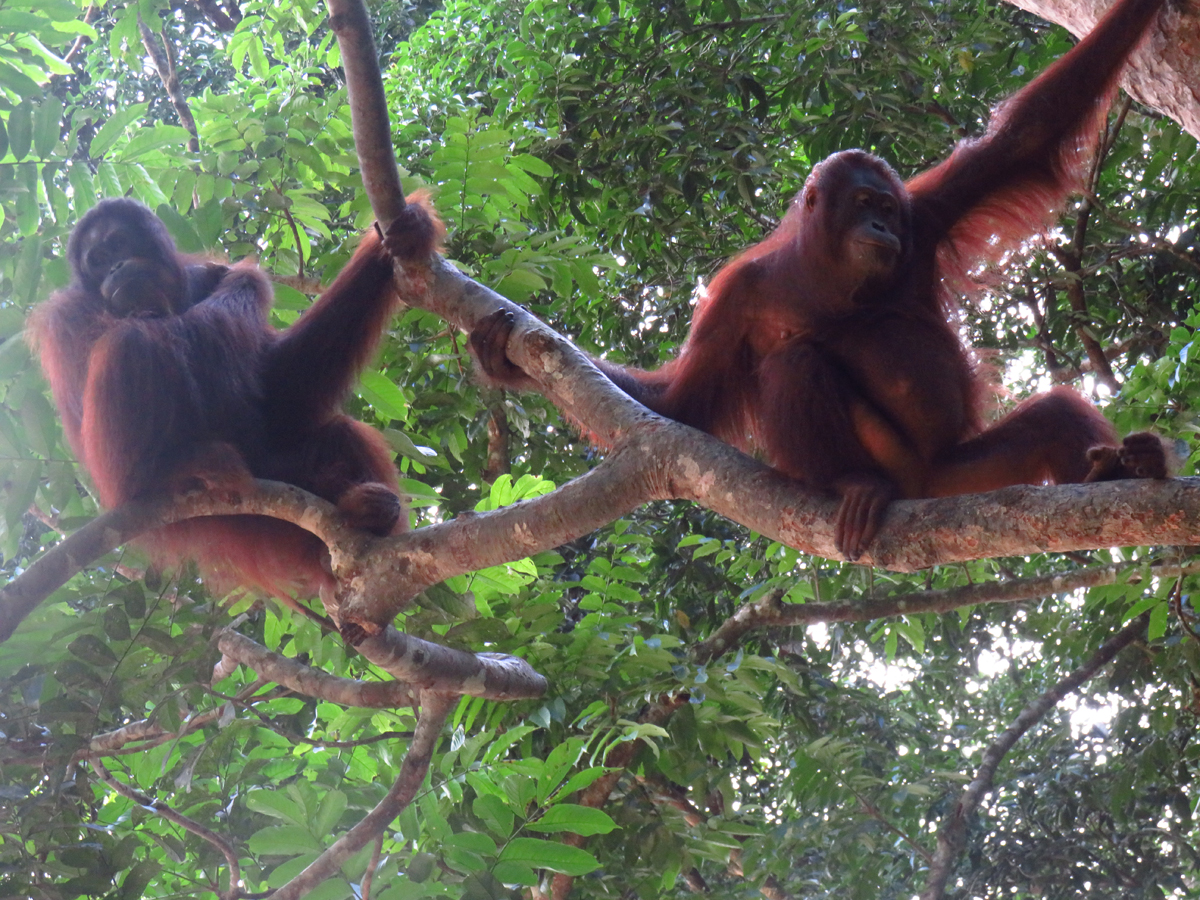 Friendships always have their ups and downs. Interestingly, this also applies to friendships amongst orangutans. Desi and Kimi, two orangutans living on Juq Kehje Sewen Island, in East Kalimantan, are good friends who are known to have the occasional fight. The two recently had another interesting tiff! What did they fight about?

Located about 10 kilometers from the Kehje Sewen Forest, Juq Kehje Sewen is a forested island covering an area of 82.84 hectares, made possible thanks to a collaborative effort between the BOS Foundation and PT. Nusaraya Agro Palm Oil (NUSA). The island is utilized to accommodate orangutans undergoing the pre-release stage of rehabilitation. Desi is the only rehabilitated orangutan currently undergoing the pre-release stage on the island; Kimi, meanwhile, is a wild orangutan who was found roaming in the area and crossed on to the island.

Our team’s observations from the island indicate that the two female orangutans have formed a close friendship. When Desi is eating, Kimi will often approach and expect food. Luckily, Desi is usually happy to oblige and will share her food with Kimi.

Desi gets annoyed, however, with the nosy macaques in the forest. As mentioned in previous stories, these notorious monkeys often steal Desi’s food, especially when they move in groups. However, they don’t dare to do it when Kimi is around, as they have learnt that she becomes aggressive whenever she sees them.

Desi often explores the island with Kimi. We suspect that Desi has learned a trick or two about forest survival from Kimi, as can be seen from the increased variety of natural foods Desi has been consuming lately. Our team has seen Desi eating Ficus racemose, or cluster figs, during observations. Prior to this, we had never known Desi to eat the fruits of this species, as she mostly depends on the fruits that the team delivers twice daily to the island.

However, the dynamic of the friendship between the two females shifted a little one afternoon in mid-November. At the time, our team was observing Desi as she devoured some bananas distributed by our team, with Kimi watching from a distance.

As Desi ate, Kimi swung over to her and quickly snatched a banana from her hand. With plenty of bananas still in her hands, Desi hardly reacted at just one being stolen.

But Kimi seemed to be quite hungry; she quickly gobbled up the banana and then snatched another one from Desi's hands. This happened a few times, until Desi finally lost her cool and pinched Kimi's arm in retaliation. This failed to stop Kimi and she cheekily reached for one more. Desi quickly slapped Kimi’s arm so hard that she slipped from the branch.

Kimi, however, would not give up! She again tried to take more food from Desi, and the two got caught up in a wrestling match over it, both trying to quickly devour any food they could get their hands on, until all of it was gone! With no more food to fight over, the struggle quickly ended.

As predicted, once the food had run out, Kimi left Desi alone. Desi tried to follow Kimi, who quickly swung away. Both Desi and our team members could not keep up with the wild female and we soon lost track of her.

How naughty of Kimi to snatch and run; to approach Desi just to steal from her, then leave once her dirty work was done! Despite these thieving antics, these two females have actually formed a strong friendship.