AUGUST 18, 2016 — In commemoration of National Natural Conservation Day, which falls on August 10 annually, the BOS Foundation and the Central Kalimantan Natural Resources Conservation Agency (BKSDA) this month released ten orangutans from Nyaru Menteng to the Bukit Baka Bukit Raya (BBBR) National Park in Katingan Regency, Central Kalimantan. It was the first release of rehabilitated orangutans to the BBBR National Park.

In this 13th release from Nyaru Menteng, the orangutans were transported in two separate groups. Awa, and her daughter Ewa; Doren, and her son Daichi; and Rambo, departed from Nyaru Menteng on August 10 and were released to the BBBR National Park the following day. Central Kalimantan BKSDA head Nandang Prihadi, BBBR National Park head Bambang Sukendro, and BOS Foundation CEO Jamartin Sihite participated directly in this first release batch by opening the cages. 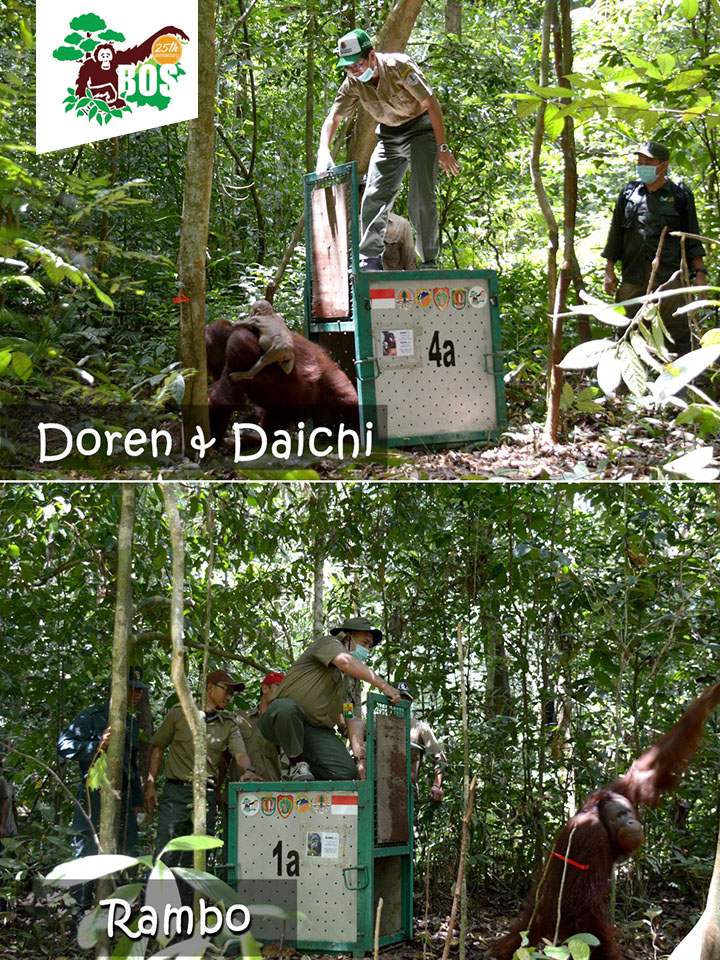 The remaining five release candidates – Dara, Mima, Kameloh, and Winda and her son Wihim – were dispatched on August 13, following a ceremony held in the Katingan Regent’s office. The event was attended by several VIPs, including the Director-General of Natural Resources and Ecosystem Conservation (KSDAE) of the Ministry of Environment and Forestry and his officials, and representatives from the Central Kalimantan Provincial office. Handover documents were signed by representatives from the BKSDA, the BBBR National Park and the BOS Foundation. 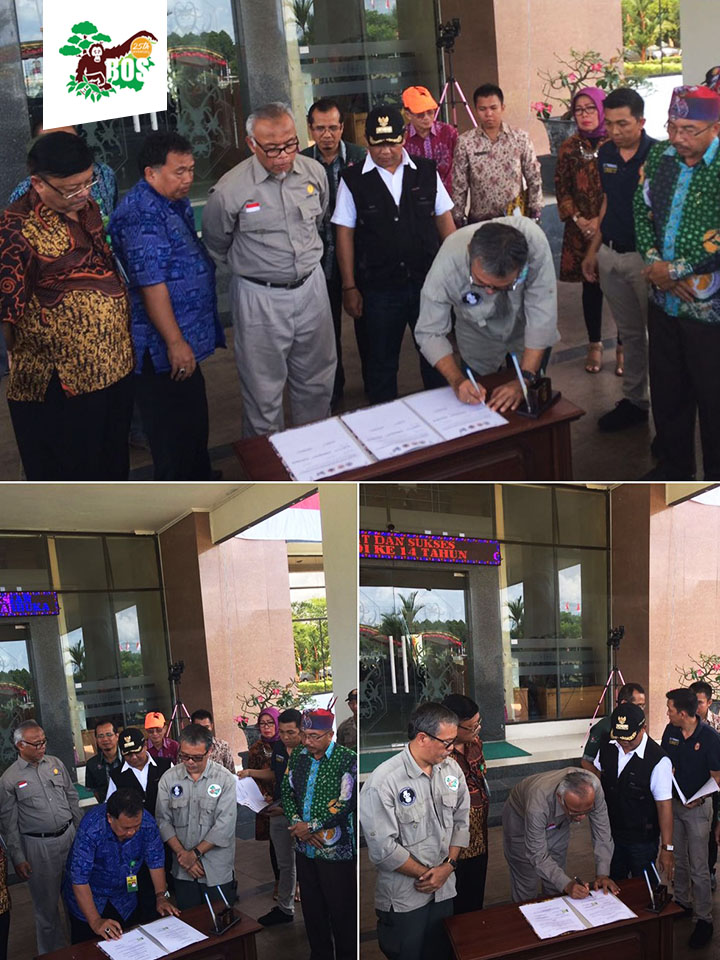 The signing of handover documents

On the day of the second group’s departure, the Orangutan Release team got preparations underway in the Nyaru Menteng 3 quarantine complex by sedating Dara, Mima, Kameloh, Winda and Wihim, and loading them in their transport cages onto transport vehicles. 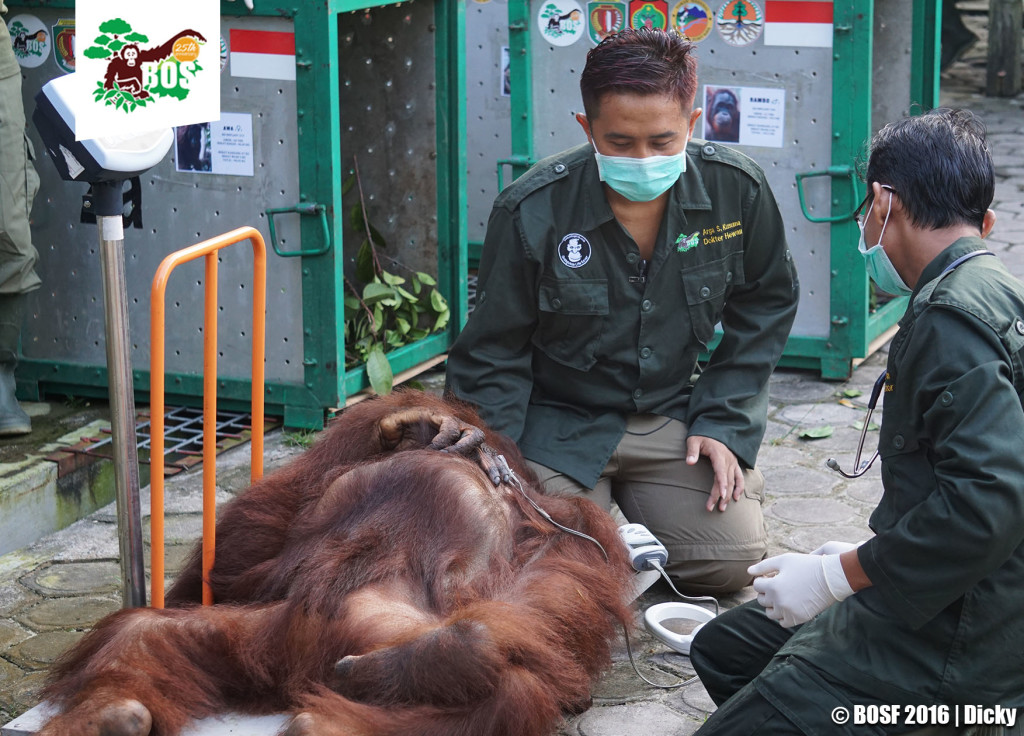 Orangutans sedated by our dedicated team of vets

The convoy left Nyaru Menteng and took the same 4-hour route to Tumbang Tundu that the first group had taken three days prior. Upon arrival at Tumpang Tundu, the cages were transferred onto small boats locally called ‘ces’, and the team took a 5-hour river journey upstream along the Bemban River to reach the release camp located deep in the National Park. 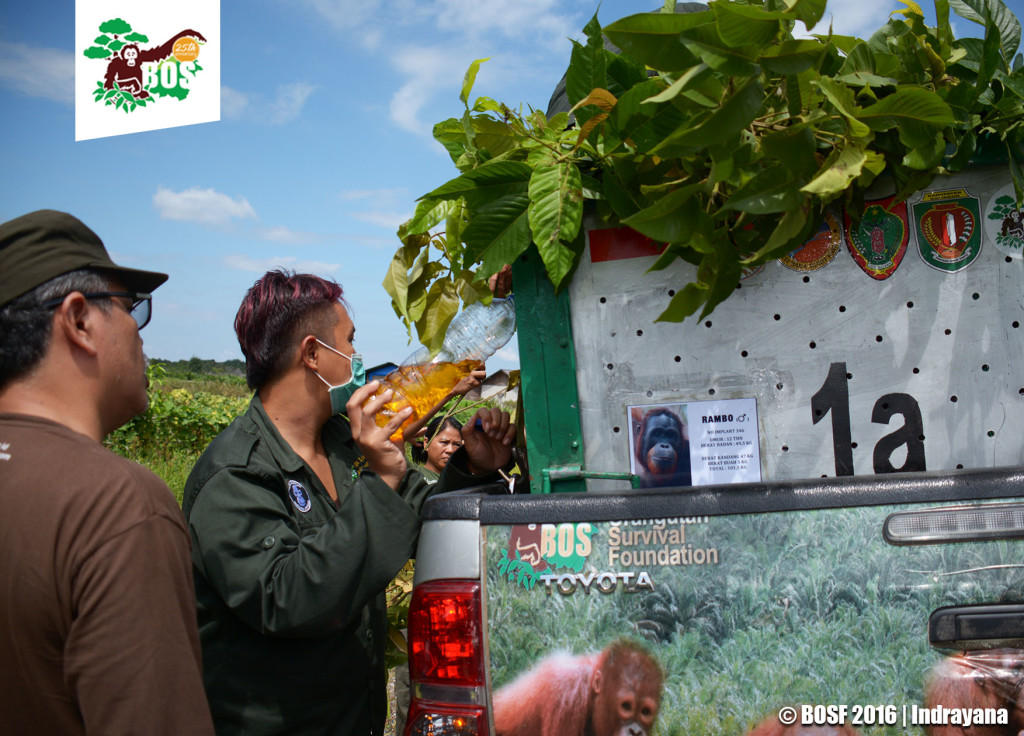 The team stopped every two hours to check the orangutans 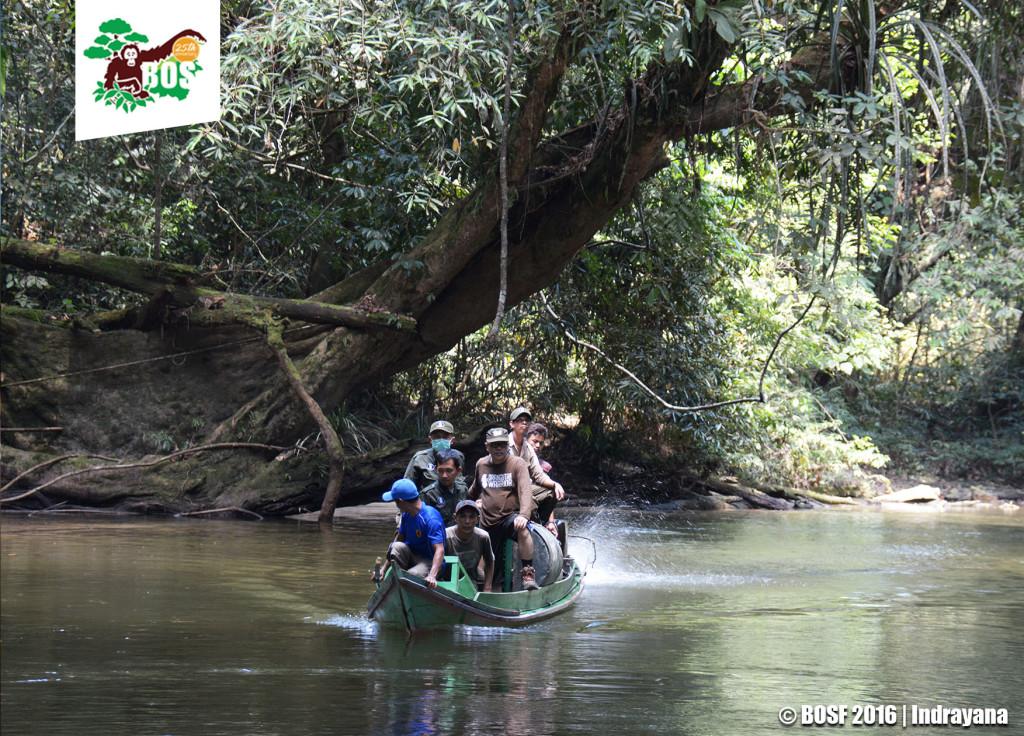 The second group’s release the BBBR National Park on August 14 went down as expected, with all five orangutans climbing the nearest trees and immediately moving off to explore their new surroundings. 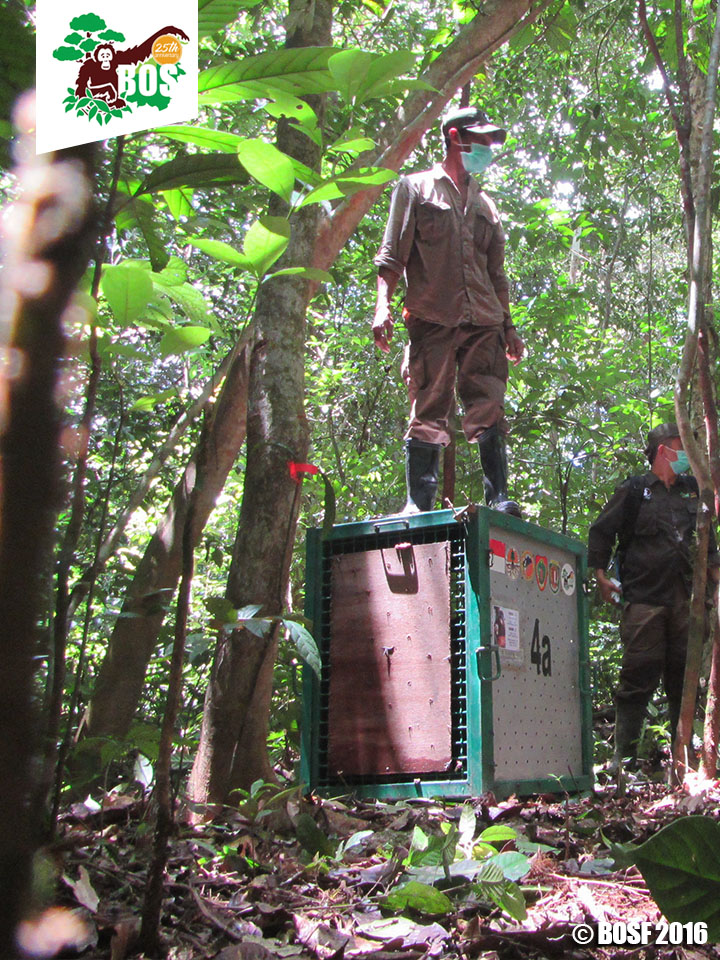 This inaugural release to the BBBR National Park was only made possible through sound collaboration among all stakeholders concerned with orangutan and habitat conservation in Central Kalimantan. The release was also supported by USAID Lestari.

Friends and followers of the BOS Foundation’s activities may remember the mother-infant pairs Sampit-Sawadee and Warna-Malee, who were repatriated from Thailand on February 9, 2016 (Read the full story here: [PRESS RELEASE] Puspa, Moza, Junior, and Two Mother Infant Pairs Repatriated from Thailand and Kuwait Return to Their Origins on the Islands of Sumatra and Kalimantan).

Following the release ceremony on August 13 in Kasongan, several guests – including the Director-General of KSDAE, Tachrir Fathoni; the Director of Biodiversity Conservation (KKH), Bambang Dahono Aji; and a representative of the Central Kalimantan Governor’s office – went to the pre-release island of Bangamat and helped open the cages to release these two mother-infant pairs to the island. 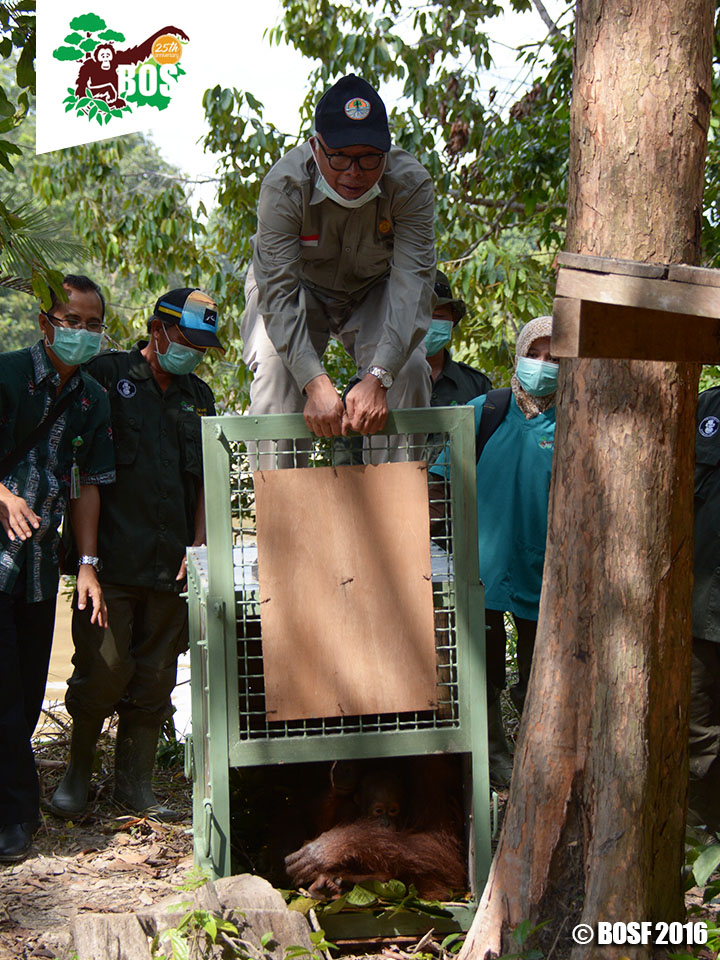 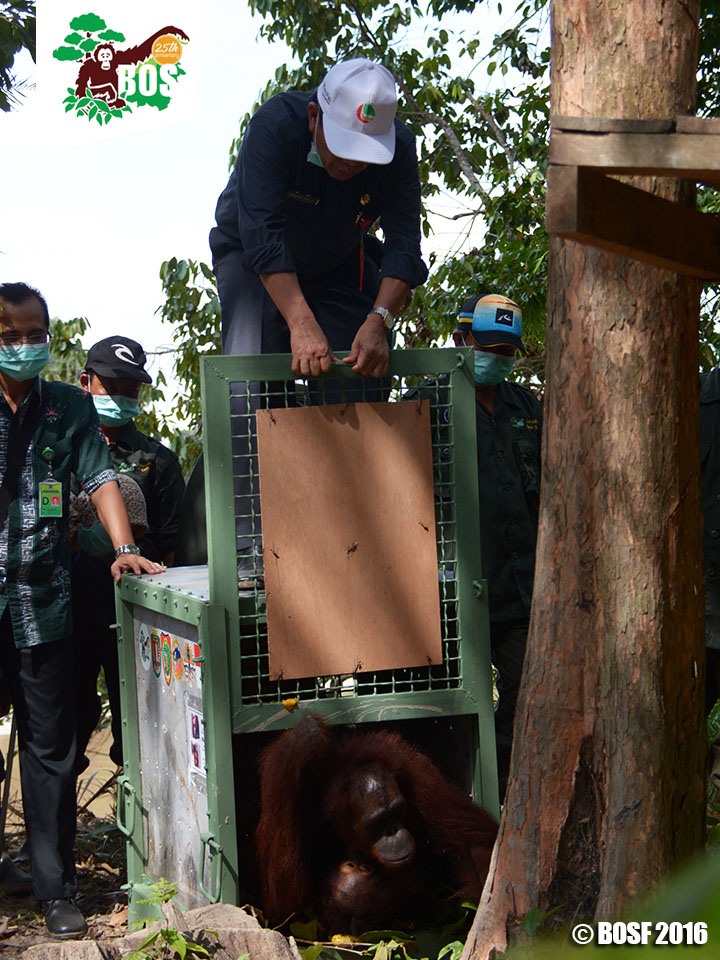 Syahrin Daulay, the Second Assistant to the Central Kalimantan Governor for Economy and Development, opens Warna and Malee’s cage

Text by: The BOS Foundation’s Communications Team in Nyaru Menteng and Headquarters

2016 marks the BOS Foundation’s 25th anniversary! Celebrate 25 years of ever-challenging, dedicated work in the field of orangutan conservation by showing your support and help save orangutans!
Learn more about the Release Program here.