BOS Foundation: In the Final Release of 2019, 11 More Orangutans Return to The Wild

The release of these 11 orangutans was carried out in two departures; the first group of five embarked on their journey on 13 December, while the second group consisting of the remaining six started their trip two days later on 15 December. The second group was accompanied by actress and singer Sherina Munaf, film producer Mira Lesmana, and film director Riri Reza, all of whom are passionate advocates for the conservation of orangutans and their habitat.

As per our standard release procedures, our medical team administered anaesthesia and performed a final health check on all of the orangutans prior to them being placed inside the transport cages. In this release, we again made use of the Hiran watershed area; the journey to which involves negotiating a river abundant with shallow cascades, making boat navigation extremely challenging. The riverbanks in this area are also dominated by steep cliffs, making it difficult for us to find ideal, flat release points. 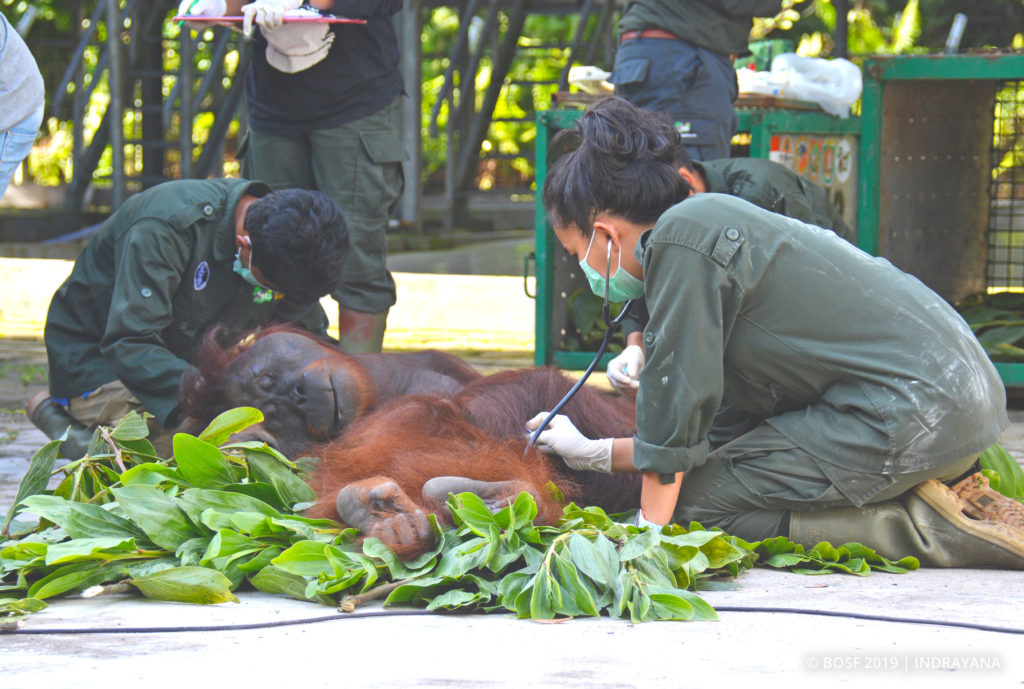 After departing from Nyaru Menteng, we travelled by car for approximately six hours to reach the village of Tumbang Melawan. During the road trip, we stopped every two hours to allow the medical team to check on the condition of the orangutans and to give them food and water. We had reached the village at around midnight and took the opportunity to rest until sunrise. 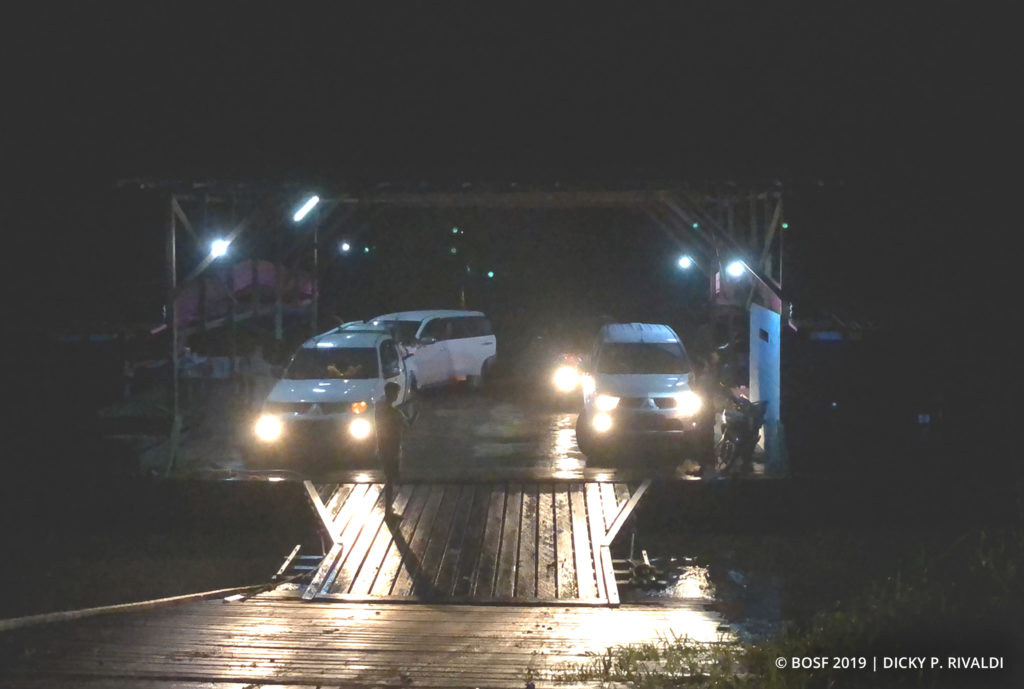 At Tumbang Melawan, we made the change from cars to motorized boats known as kelotok. From this point on, we experienced a rather smooth river journey, thanks to recent rainfall upstream which had raised the river’s water level. But this does not mean the trip was completely devoid of danger! Since the safest forest areas for release sites are almost always located upstream, we had to battle against the river current. And this time, the Hiran River’s current was stronger than usual. In certain spots, our drivers had to carefully navigate the boats through the strong current to avoid small whirlpools, which can easily flip boats upside down. We all held on tight. 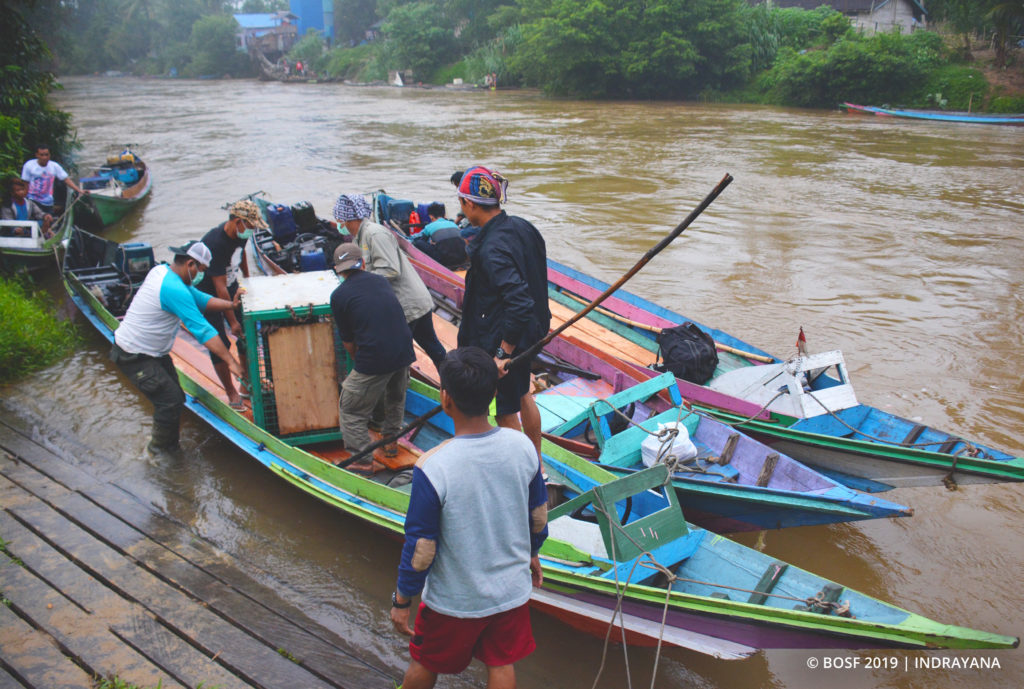 After 6 hours of exhausting and heart-racing travel under the rain, we had finally arrived at the location of the release. Everyone was tired, but excited. The purpose of undertaking this journey was about to be realised – we were finally going to release orangutans to the wild!

Just one day following their departure from the rehabilitation centre, the first orangutan release convoy had arrived at the release point. Upon arrival, the team worked quickly to release Fungky, Baim, Suja and her daughter Bella, and Sidomulyo from their transport cages. As soon as the cages were opened, each and every orangutan climbed up the closest trees to enjoy their new freedom.

When the second convoy of orangutans arrived at the forest, Sherina was given the honour of opening the first cage. She was wide-eyed and almost breathless as she opened the cage and watched Malee immediately rush to climb up a nearby tree. This was followed of the release of Hilda and daughter, Hadijah, by Mira Lesmana, and then Warna by Riri Riza. This long journey finally came to an end when Franky and Sapat were released as everyone looked on at the 6 orangutans taking their first steps into true freedom. 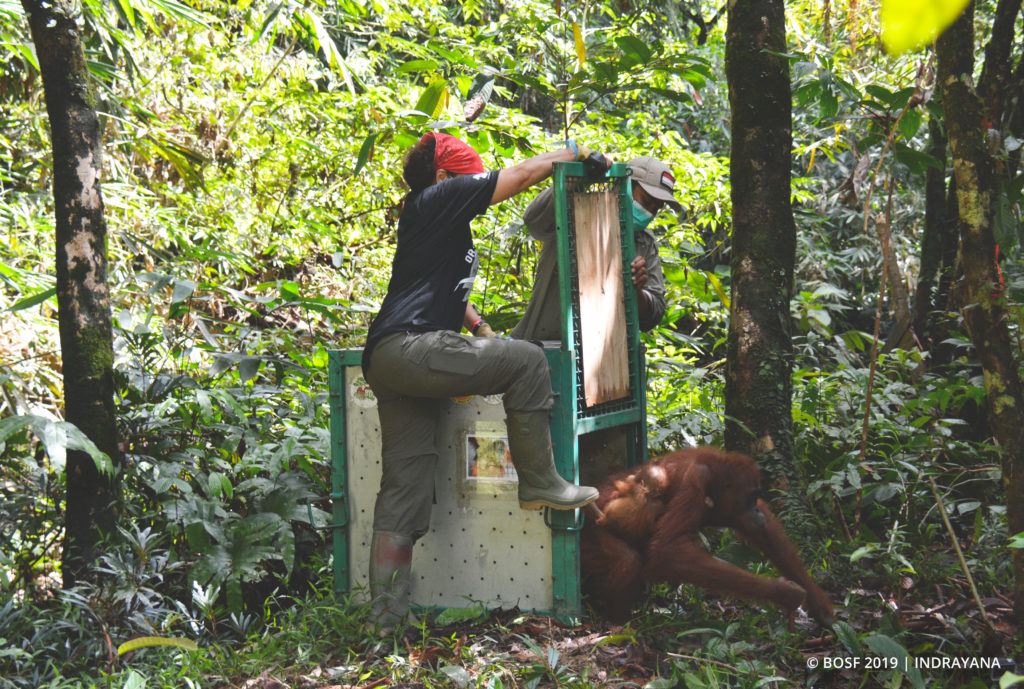 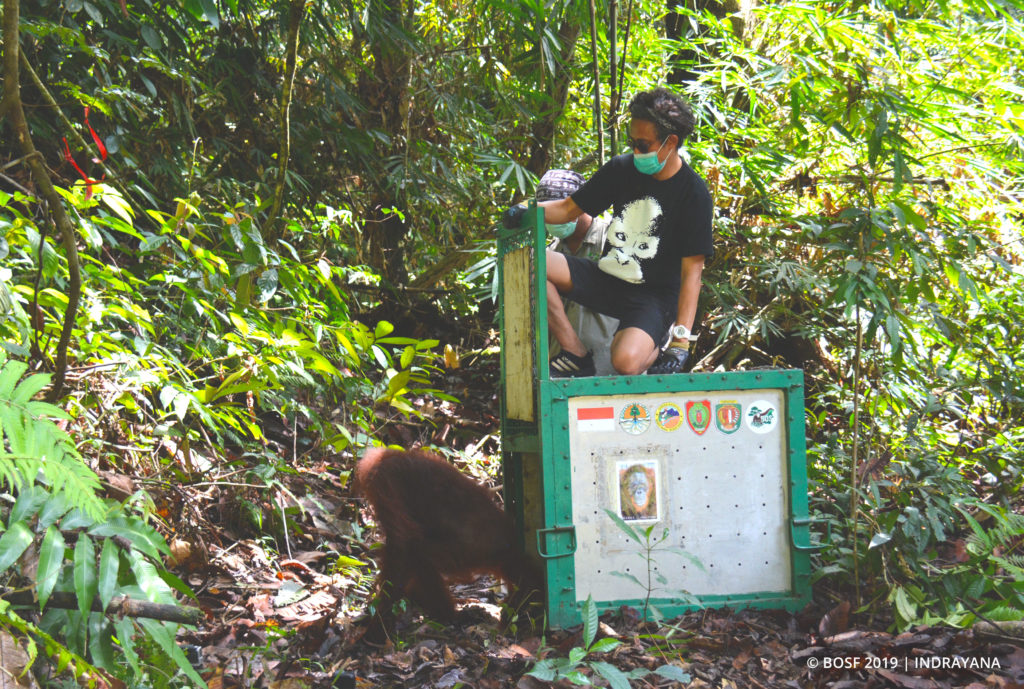 But as our release team enjoyed the moment, our PRM team immediately began their work following the newly released orangutans in order to record their activities and behaviours. This vital data collected by the PRM team is necessary for us to assess the extent to which these orangutans are adapting to their new environment. Warna and her daughter, Malee, decided to spend their time together with Hilda and Hadijah, eating fruits, young leaves, and termites that they found nearby the release point. Franky did the same, as he spent his first day of freedom feeding on the abundant food the forest had to offer.

We will continue to monitor these orangutans, to ensure that they thrive and prosper in this national park. This last release for 2019 marks 462 orangutans released by the BOS Foundation into forests across Central and East Kalimantan since 2012. With only 457 orangutans still in our care at our Nyaru Menteng and Samboja Lestari Rehabilitation Centres, we could not be prouder to have returned more orangutans to the forest than are in our care! We will keep this amazing momentum going into the new year and coming years, until every orangutan in our care is living their best life in the forest!