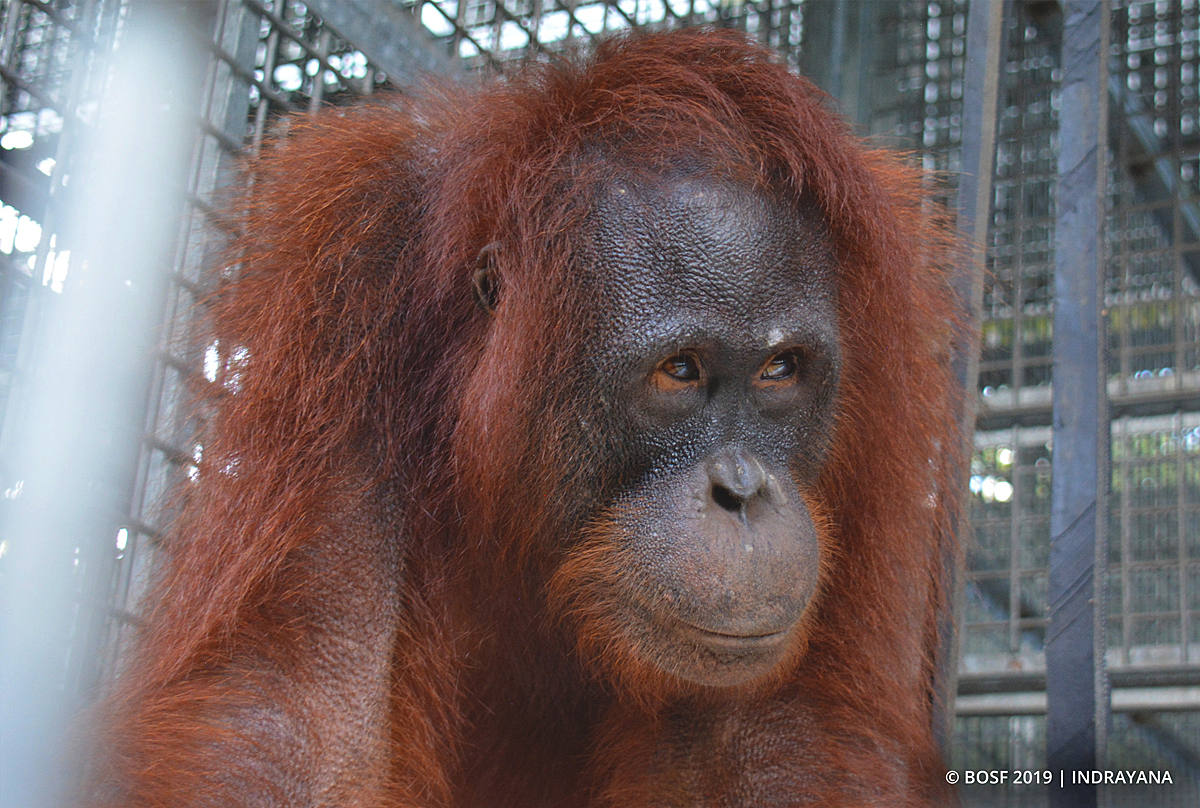 December 14, 2019 — Eleven lucky orangutans from BOS Nyaru Menteng— including three mother-baby pairs and two wild adult males— are being released back into the forest! Meet the candidates! Good luck everyone! 🙂 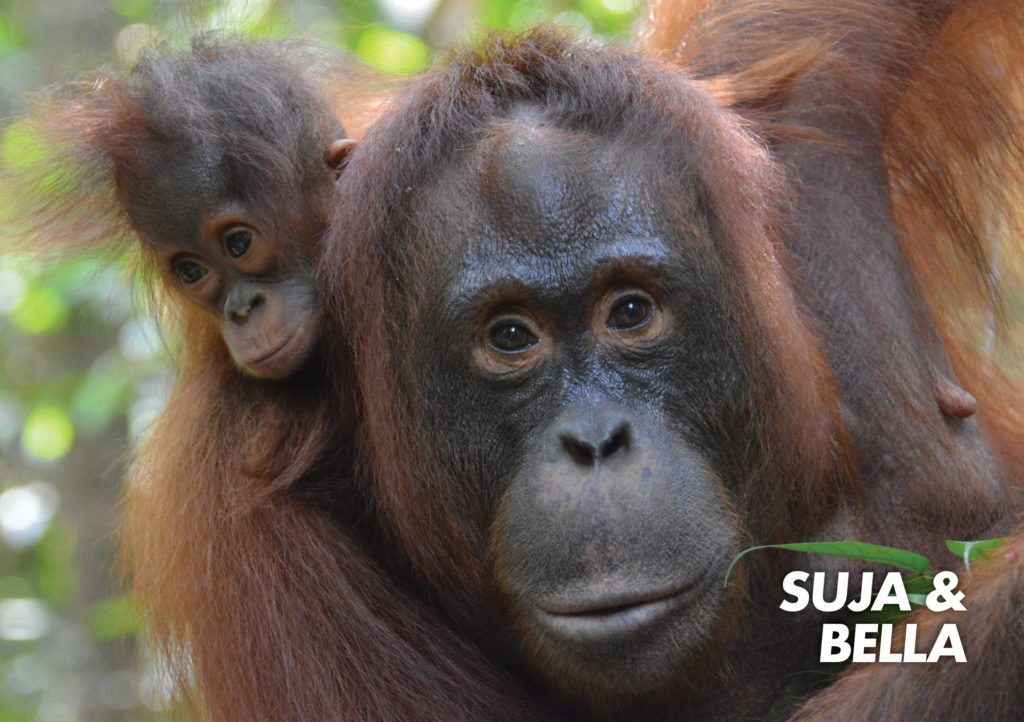 Suja was repatriated from Thailand together with 47 other orangutans. She arrived at the Nyaru Menteng Orangutan Rehabilitation Centre on 22 November 2006, at the age of four years and weighing 14 kilograms.

Seven years later, still at Nyaru Menteng, Suja gave birth to her first child, whom we named Syahrini. Tragically, Suja was unable to properly care for Syahrini, and the two had to be separated so that, Syahrini could be raised by a human surrogate mother.

On 5 April 2017, Suja was transferred to Salat Island. On the pre-release island, Suja further developed her natural skills, and on 18 February 2019, she gave birth to her second child, Bella. This time, being a little bit more prepared, Suja was ready for motherhood and took great care of her baby.

Suja was always friendly toward her caregivers, and she tended to avoid competition with other orangutans on the island by keeping herself busy with her explorations.

Suja is now 18 years old and weighs 45 kilograms; baby Bella is 10 months old and weighs 3 kilograms. Both mother and daughter are ready to enjoy life as true, wild orangutans in the forest. 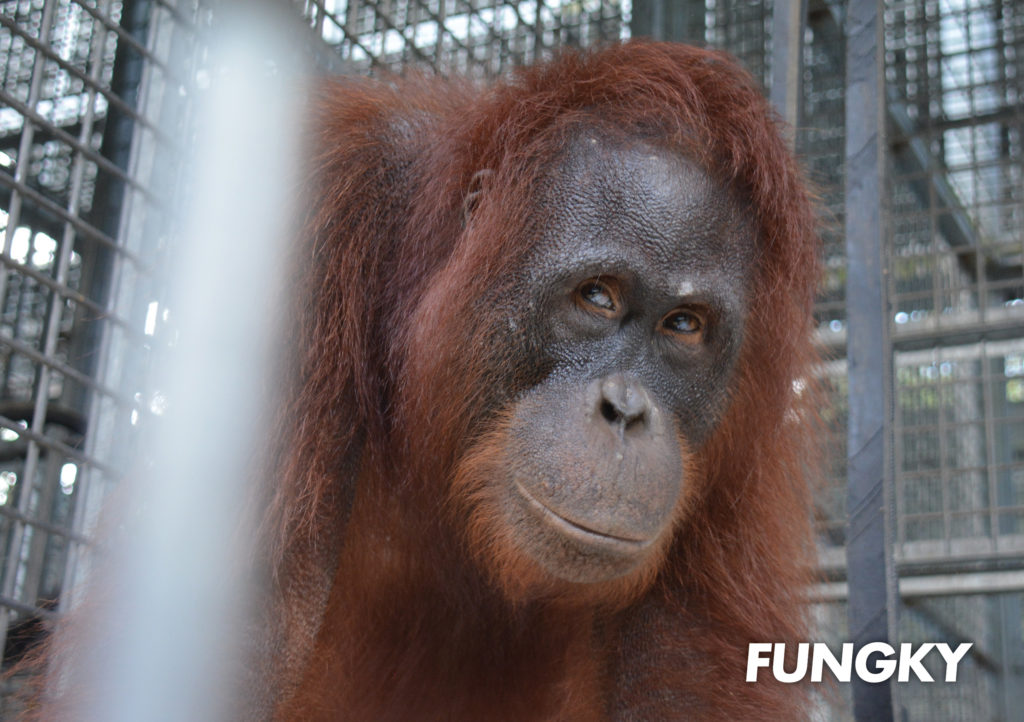 Fungky was rescued from a resident of Bereng Bengkel, Palangka Raya, Central Kalimantan on 13 April 2006. She was just 18 months old when she arrived at Nyaru Menteng and weighed 4.4 kilograms.

After passing the quarantine period, Fungky entered Forest School and successfully completed all stages. On 27 June 2013, she was transferred to Palas Pre-release Island to undertake the final stage of rehabilitation. While on the pre-release island, Fungky liked to play with water and explore, and became a highly alert individual.

Fungky is now 15 years old and weighs 35 kilograms. Soon, she will be free to explore the forests of her new home in the TNBBBR. 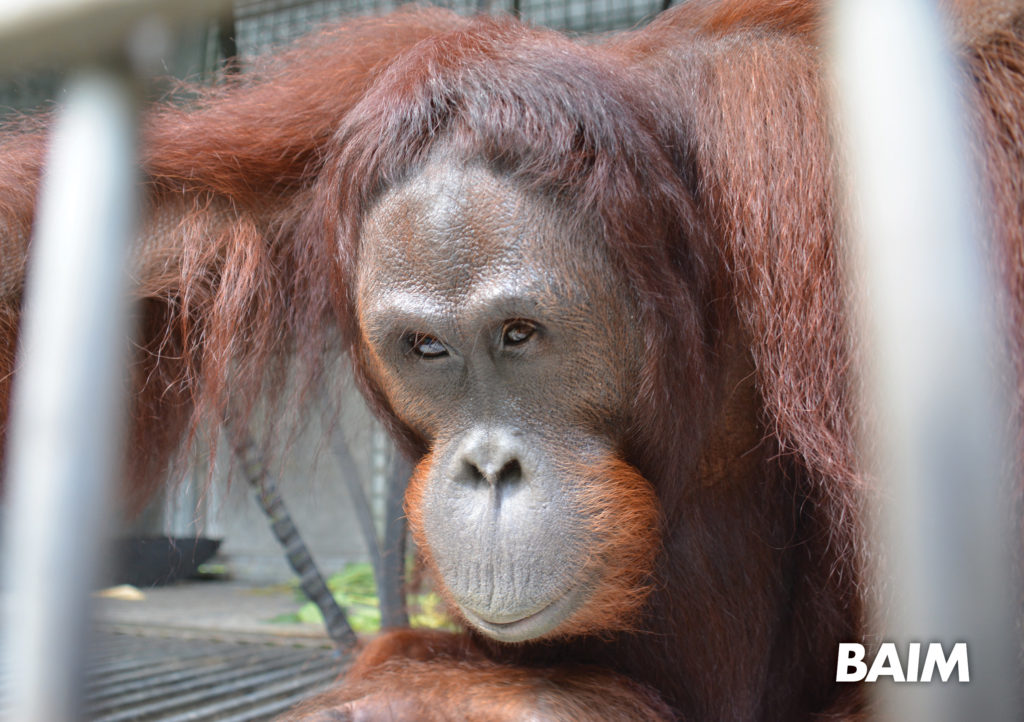 Baim was rescued through a joint operation carried out by the Central Kalimantan BKSDA and BOSF Nyaru Menteng, on 4 July 2008. Prior to his rescue, Baim had allegedly been kept as a pet by a resident of Palangka Raya for a period of two months. He was 18 months old at the time and weighed only 6 kilograms.

At Nyaru Menteng, Baim attended Forest School and successfully completed all stages. On 18 March 2014, Baim was moved to Palas Island to begin the pre-release stage of the rehabilitation process. Baim quickly proved himself a reliable explorer, who preferred the company of other orangutans over that of humans. He also showed his thoroughly developed social skills in his avoidance of competition with dominant male orangutans.

Baim is now 13 years old and weighs 40 kilograms. With his well-developed survival skills, he is ready to return to the wild and enjoy his freedom in the lush forests of the TNBBBR. 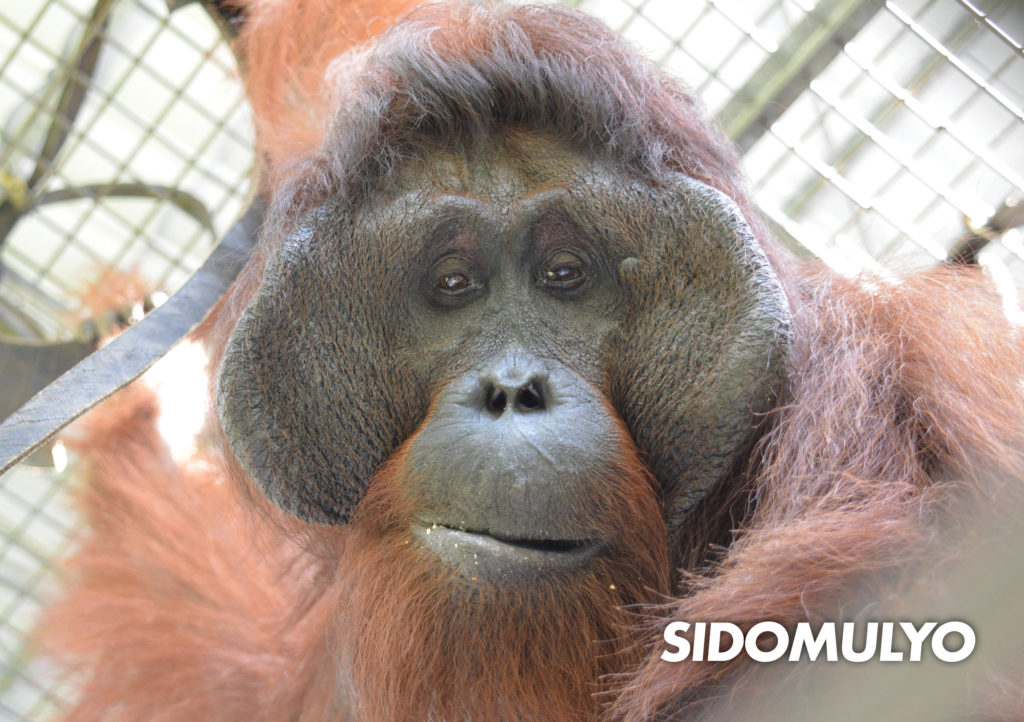 Sidomulyo was rescued from Sidomulyo Village, Palangka Raya, Central Kalimantan on 2 November 2019. This 25-year-old male weighing 65 kilograms was found in a community field in a densely populated area, and was thought to have strayed from his habitat due to lack of food resulting from widespread forest fires.

After undergoing treatment at the Nyaru Menteng Orangutan Rehabilitation Centre, Sidomulyo is now ready to go home to the TNBBBR and continue living as a true, wild orangutan. 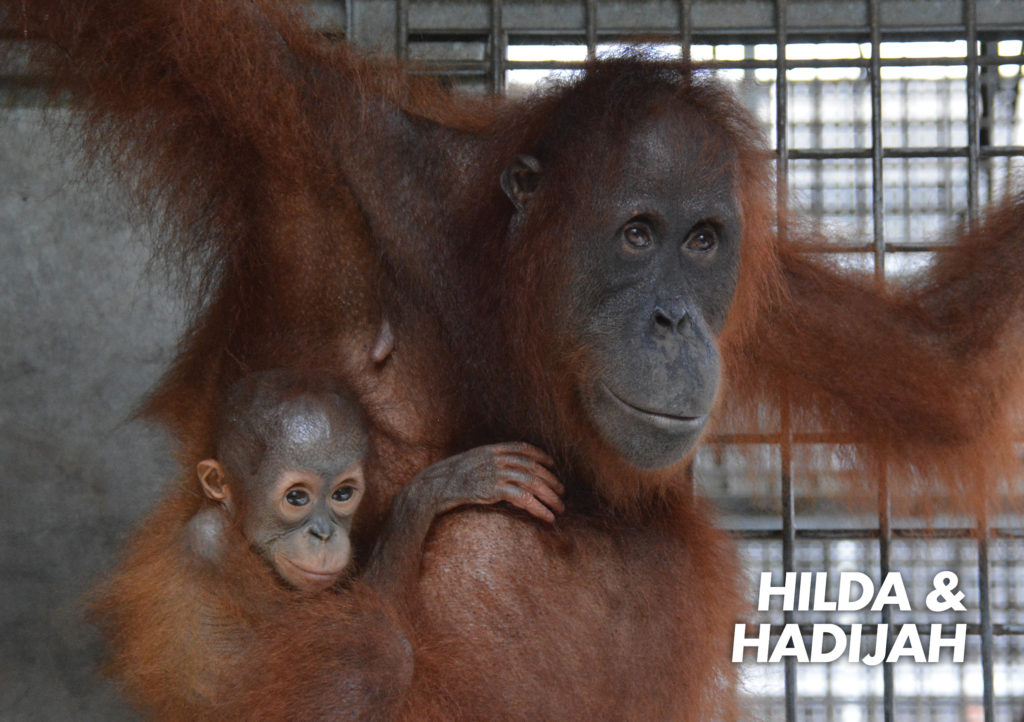 Hilda was rescued from a palm-oil plantation in East Kotawaringin Regency on 25 August 2007. She arrived at Nyaru Menteng at the age of 18 months, weighing 4 kilograms.

After passing quarantine, Hilda joined Nyaru Menteng’s Forest School and successfully completed all of the courses. In order to fulfil the requirements for her final stage of rehabilitation, Hilda was transferred to Palas Island on 12 March 2014.

After a few years living on Palas Island, Hilda gave birth to daughter Hadijah on 30 August 2018. On the pre-release island, this mother-infant pair showed rapid development. Hilda avoided humans, was an avid explorer, and got along well with other orangutans. 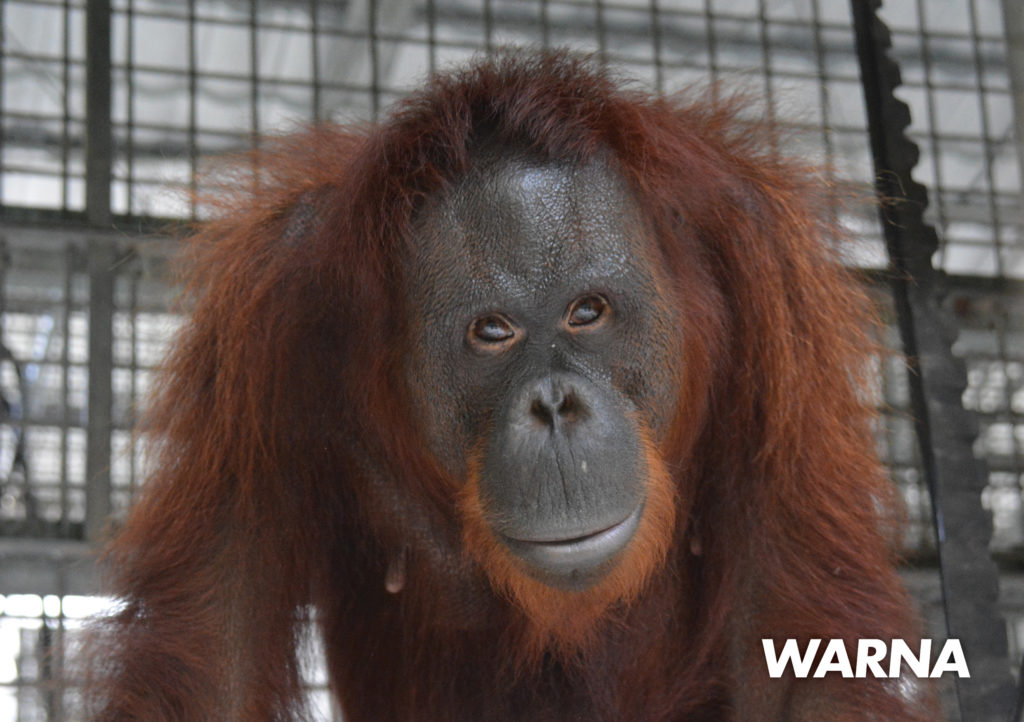 Warna was repatriated from Thailand with her daughter, Malee, on November 2015. After a series of health and quarantine at Safari Park, they they were taken to Nyaru Menteng and arrived on February 11, 2016. Upon arrival at Nyaru Menteng, Warna was 12 years old and weighed 36 kilograms.

On 11 April 2017, Warna was moved to Kaja Island for the pre-release stage of rehabilitation. During this stage, Warna rapidly developed her survival skills, all the while Malee started to show signs of independence. Warna, a charming character, likes to spend time alone and will actively avoid humans. While not a dominant orangutan, she can still defend herself when needed.

Warna is now 15 years old and weighs 35 kilograms. Thanks to her sound skillset, Warna is ready to return to the forest to live as a true, wild orangutan. 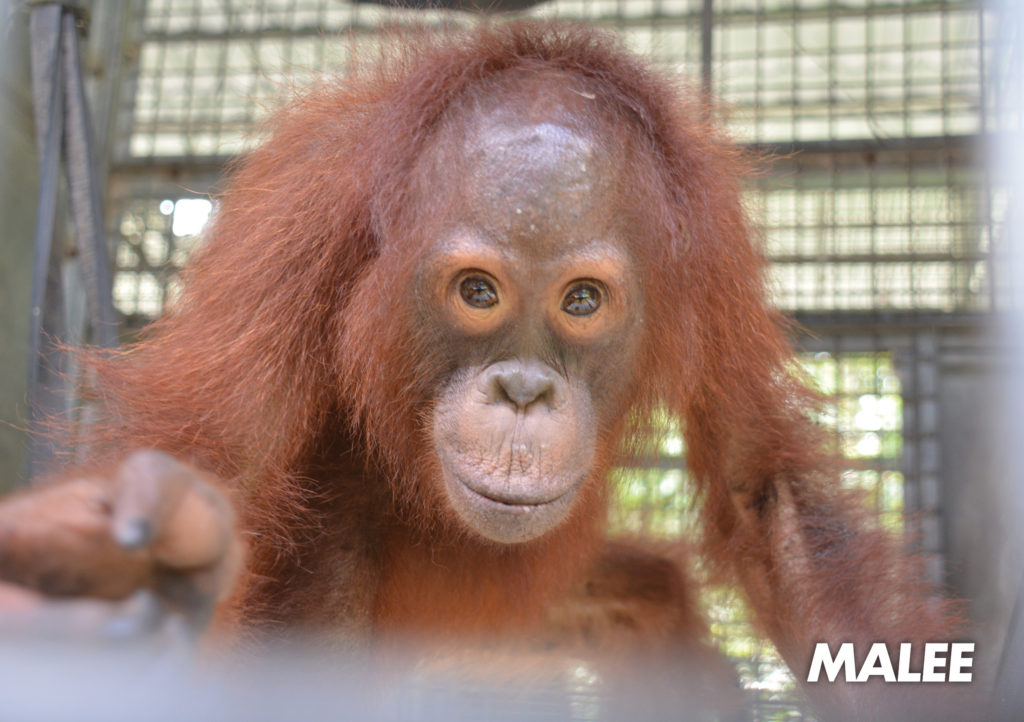 Malee arrived at Nyaru Menteng when she was 2.5 years old and weighed 7 kilograms. She was repatriated from Thailand on 11 February 2016 with her mother, Warna.

Malee and her mother were moved to Kaja Island on 11 April 2017. During her time on the island, Malee showed excellent progress in the development of her skills progress and took a relatively short time to establish her independence from her mother. Malee knows to avoid humans and is very fond of exploring. As her confidence continued to increase, she frequently roamed the island independently, and became an adept forager.

Malee is now five years old and is ready to enjoy true freedom in the forests of the TNBBBR. 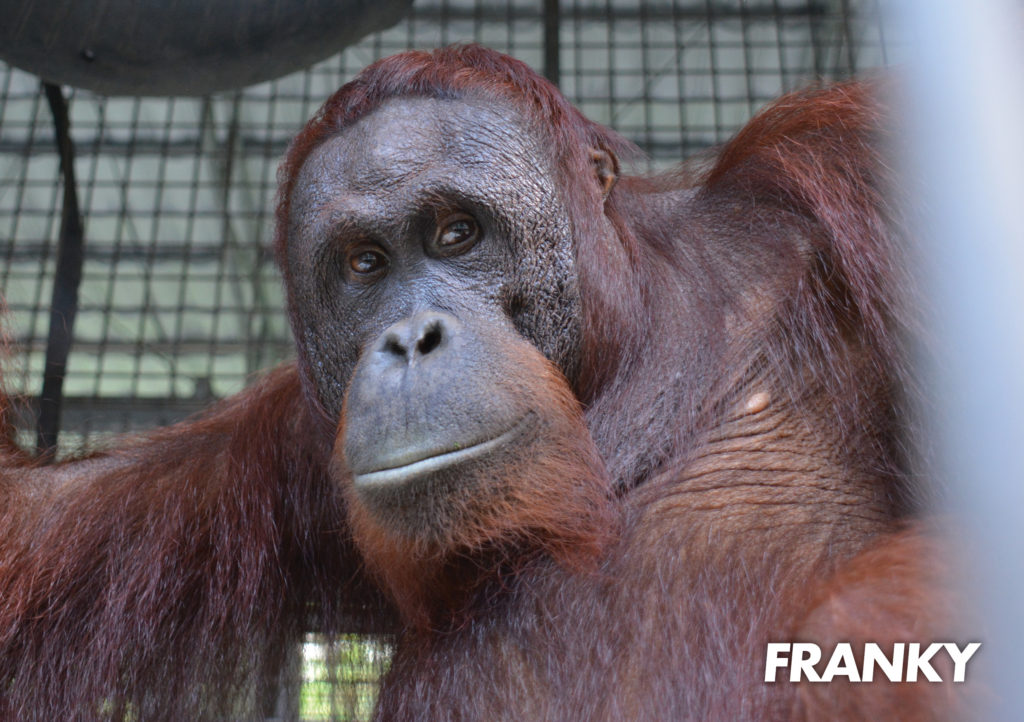 Franky arrived at Nyaru Menteng on 7 January 2008, after being rescued in Pontianak, West Kalimantan. He was two years old at the time of his rescue and weighed 15 kilograms.

After passing quarantine and completing all levels of Forest School, Franky was moved to Kaja Island on 18 April 2017 for the final stage of rehabilitation. As a young adult with growing cheek-pads, Franky avoided humans, but socialized well with female orangutans. He was adept at reading social cues read situations well, but also capable of defending himself when needed.

Franky is now 14 years old and weighs 35 kilograms. With his sound skillset, Franky will soon be exploring his new home in the forests of the TNBBBR. 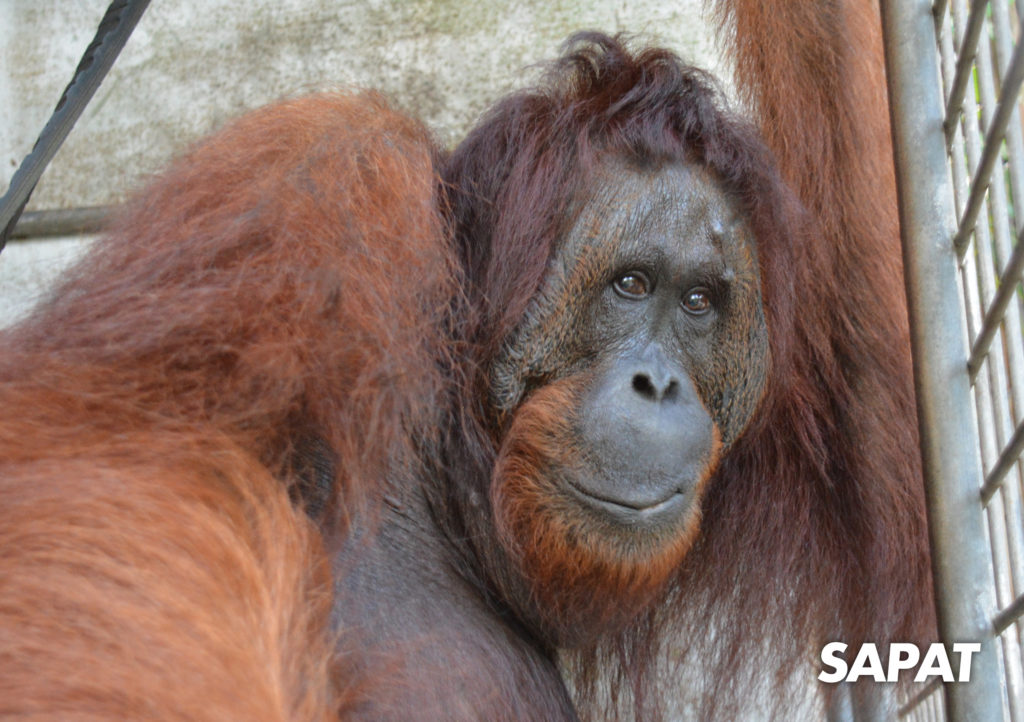 Sapat arrived at Nyaru Menteng on 22 September 2019. This adult male was rescued from a palm-oil plantation in Mangkutub Village, Kapuas Regency, Central Kalimantan. He had become trapped in the plantation, and during the rescue operation just sat on the ground in a weak state.

At the Nyaru Menteng Orangutan Rehabilitation Centre, Sapat immediately received intensive treatment. He was extremely underweight at only 45 kilograms, and severely dehydrated. A series of X-rays showed more than 70 air rifle bullets lodged in his body.

After two months of treatment and the removal of the bullets from his body, Sapat’s health improved and his weight increased to 60 kilograms. The time has now come for this 25-year-old to return to the wilds of the TNBBBR.