It has been more than a year since Sif and her daughter Sifa were released into Bukit Batikap Conservation Forest. Learn more about the orangutan release program.

They were last observed in July 2013, and despite the Team’s efforts to locate them, they had not been seen since. Unintentionally, the Monitoring Team found this pair just recently when crossing Joloi River on their way back from gathering phenology data.  In fact they found two families, the first being Emen and her son Embong who were in a tree by the Joloi River.  Delighted, the Team was preparing to take photo’s, when they saw another pair of orangutans in the same tree, Sif and Sifa. Sifa was on the highest branch and  started dropping branches while kiss-squeaking towards the Team. 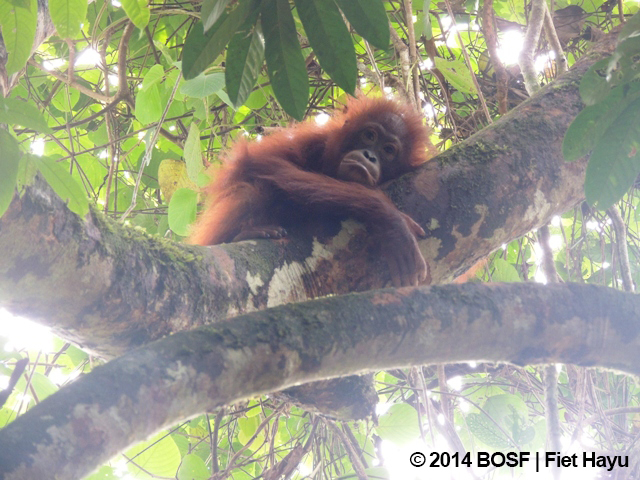 Emen and Embong didn’t seem to pay any special attention to the Team's presence and sat idly watching Sifa throwing vegetation at the Team.

The next day, the Team returned to the same location. The orangutans had moved not far away. Sifa behaved like a wild orangutan should and together with Embong they played, pulling each other’s hands, throwing leaves and fruit. Embong is still more attached to his mother and nursed every now and then while playing with Sifa.

The mothers Sif and Emen, meanwhile, sat eating fruit together. Emen appeared to eat Sif's choice of food and when the group moved on, Emen followed Sif.  It was great to see the two families healthy and spending time together. 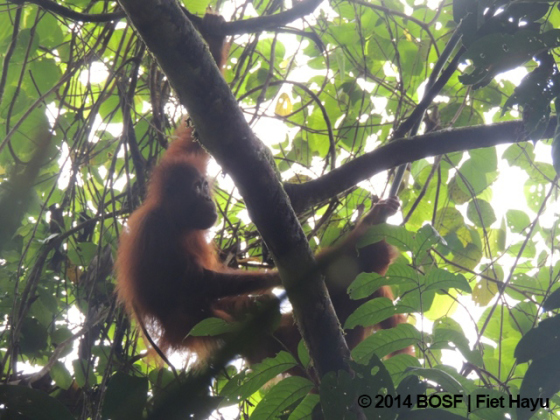 Slamet, Miss Owen and the bees

Since his release day back in April 2014, Slamet, who was very enthusiastic once he stepped out of his travel cage, has been seen in the company of Miss Owen and several other female orangutans.

On his first day in Bukit Batikap, Slamet approached Miss Owen and she didn’t seem to avoid his advances. 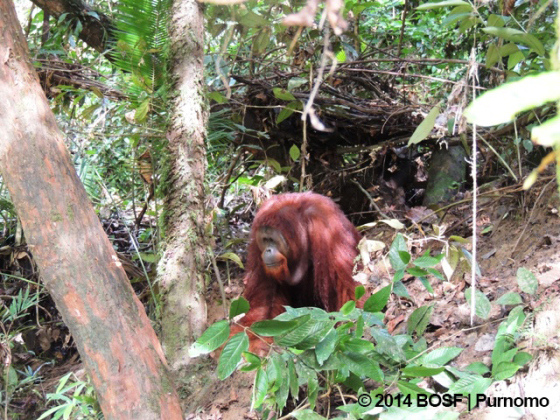 Their togetherness went on for some time until they encountered a swarm of bees. Slamet was stung several times on the face while Miss Owen fled to the banks of Joloi River.  Let's hope we see these two again together soon.
Text: Ike N. Naya Silana
View this post on the BOS Nyaru Menteng blog