The BOS Foundation is celebrating yet another successful release of rehabilitated orangutans from Nyaru Menteng to the Bukit Baka Bukit Raya (BBBR) National Park in Katingan Regency, Central Kalimantan. This release coincided with World Habitat Day, which occurs annually on the first Monday of October.

The Nyaru Menteng team commenced preparations in the late afternoon in the Quarantine facility, where the orangutans were sedated by the medical team. 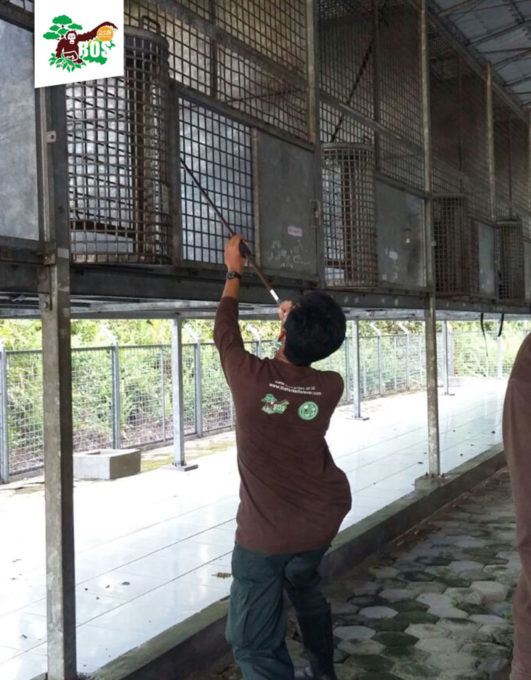 The 10-hour journey by car from Nyaru Menteng to the BBBR National Park began after dark when the temperature was cooler for the orangutans and the traffic was minimal. The destination was Tumbang Tundu village in Katingan Regency, which is the last village reachable by car on the outskirts of the national park. Along the way, the team took short breaks every two hours so the medical team could check on the orangutans and ensure they were adequately nourished and hydrated. 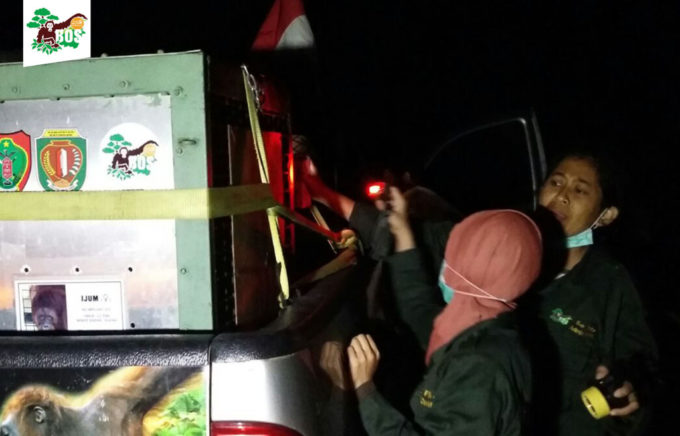 From Tumbang Tundu, the team continued the journey with a 4-hour river trip commencing after sunrise. 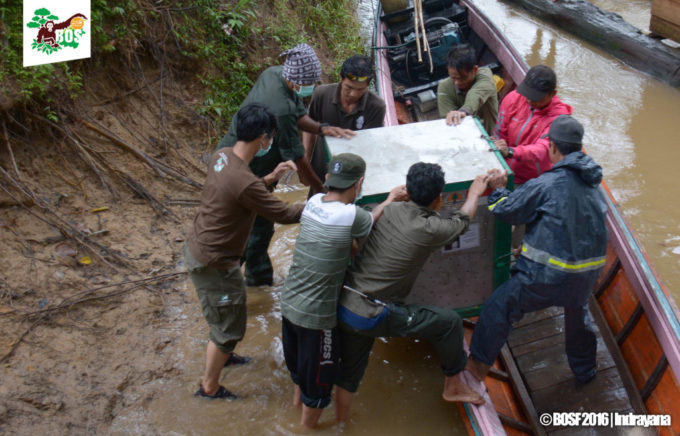 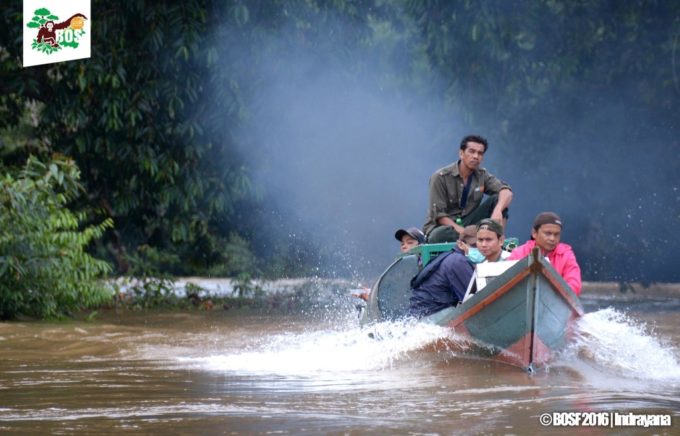 Once the team arrived at the predetermined locations in the BBBR National Park, the orangutans were released back into natural habitat. 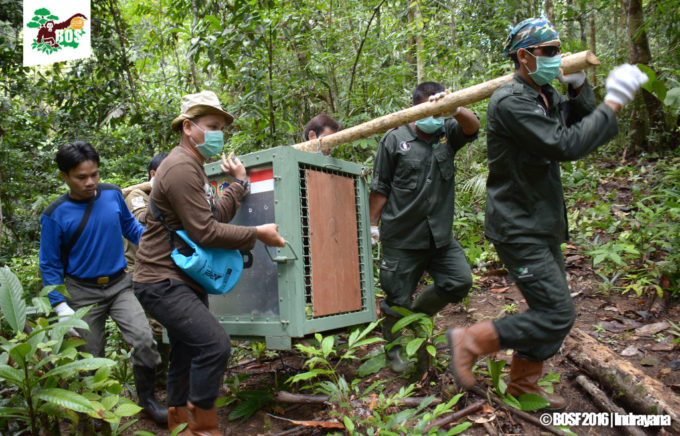 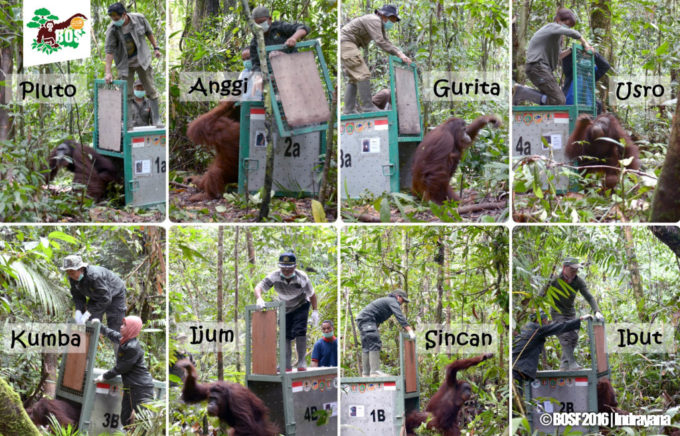 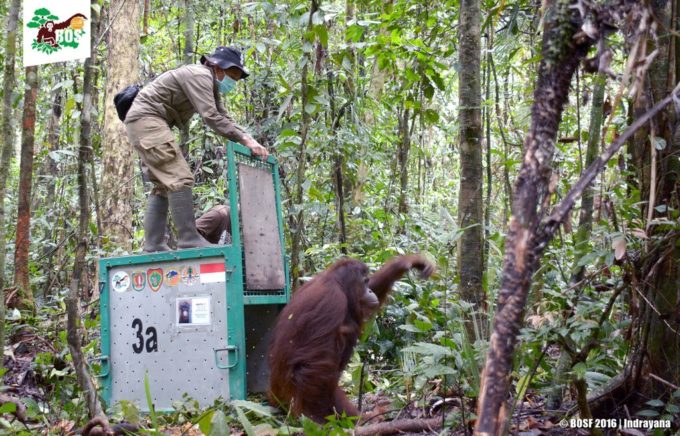 A special moment for Sri Rahayu, the Babysitter Coordinator from Nyaru Menteng, as she opens Gurita's travel cage and sets her free in the Bukit Baka Bukit Raya National Park, on October 6

Thank you to everyone who has supported this release and continues to support orangutan conservation!

Semi-wild orangutans are those who, at the time of rescue, have previously encountered humans yet have retained sufficient natural behaviours and vital skills to survive alone in the wild. 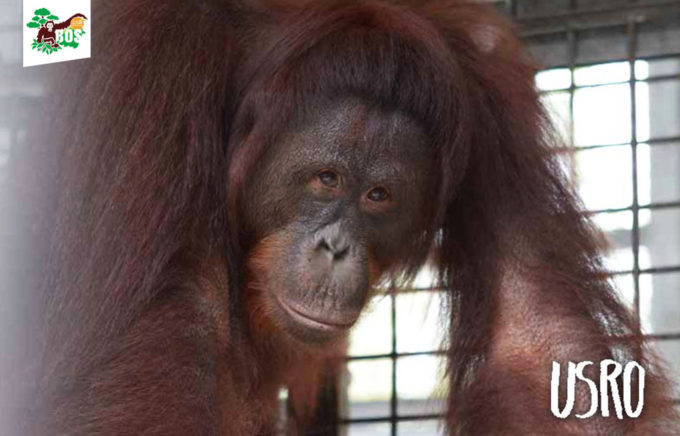 Usro came to Nyaru Menteng on February 13, 2006, after she was rescued from a Tuanan resident of Kapuas Regency in Central Kalimantan. She was 2.5 years of age at the time, weighed 6 kilograms, and still exhibited some wild behaviour.

After passing a quarantine period, Usro was placed in Nyaru Menteng’s Socialization Complex before being transferred to Kaja Island on November 19, 2014, so we could assess how much wild behaviour she had maintained.

During her time on Kaja, Usro socialized well with her fellow island inhabitants. She has also maintained a dislike for human presence and will kiss-squeak and shake tree branches or throw twigs whenever she encounters people.

Usro is now 13 years old and weighs 42 kilograms. After 10 years of rehabilitation, she is ready to live in the wilds of the Bukit Baka Bukit Raya National Park. 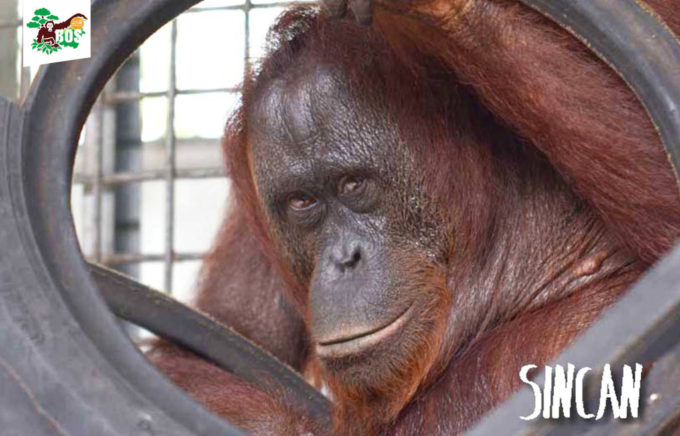 Sincan came to Nyaru Menteng in September 2004 when she was 3 years old, after being rescued by a joint team from the Central Kalimantan BKSDA and BOS Foundation Nyaru Menteng. She was found in an oil palm concession area in Parenggean village of Central Kalimantan’s East Kotawaringin Regency, weighing 12 kilograms and still exhibiting wild behaviours.

After passing through quarantine, Sincan was placed in Nyaru Menteng’s Socialization Complex and moved to Kaja pre-release island on November 19, 2004. As a dominant female, Sincan rules the feeding platform making sure she has access to plenty of fruit. This oval-faced beauty is identified by her bulky frame and blackish-brown facial skin.

Ever-observant Sincan is now 16 years of age and weighs 42.1 kilograms. She will soon be released to the natural forest of the Bukit Baka Bukit Raya National Park. 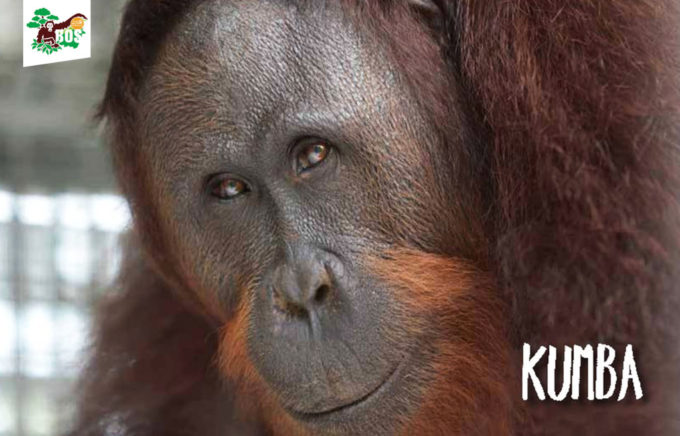 Kumba was rescued from an oil palm plantation area in the Antang Kalang Sub-Regency of East Kotawaringin Regency, in Central Kalimantan, on August 24, 2007. He arrived at Nyaru Menteng when he was 4.5 years old and weighed 8 kilograms, with a wound to his left eye and cuts on both palms of his hands. At the time, he still exhibited wild behaviour.

Kumba was placed on Kaja Island to begin the pre-release phase on November 19, 2014. Kumba, who dislikes human presence, is very good at foraging and selecting natural foods found on the island. He prefers to spend time alone.

Small-statured Kumba has thin, blackish-brown hair and a reddish-brown beard. Now 14 years old and weighing 27.1 kilograms, he will soon regain his freedom when he is released to the Bukit Baka Bukit Raya National Park. 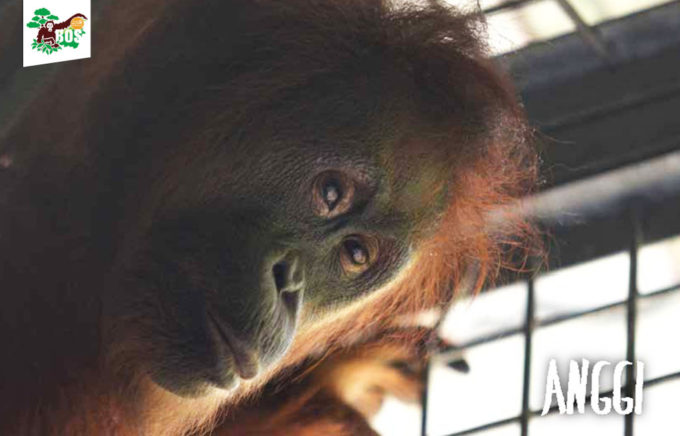 Anggi was rescued through a joint-team effort between the Central Kalimantan BKSDA and the BOS Foundation on October 21, 2005, after being found in an oil palm plantation in Parenggean village of East Kotawaringin Regency, Central Kalimantan. She came to Nyaru Menteng in poor condition when she was 3.5 years old, weighing only 6 kilograms. The team had found Anggi placed under an old outdoor table; she was soaking wet and covered in mud, and her hands and hip had been bound with plastic twine. A medical examination revealed she was dehydrated and had twine wounds on her wrists that were showing signs of infection. She was promptly taken to the BOS Foundation Nyaru Menteng clinic for immediate treatment.

After a period of intensive treatment and quarantine under the care of the Nyaru Menteng medical team, Anggi joined other orangutans within our rehabilitation center. She rejected contact with babysitters and technicians, and was moved to our Socialization Complex.

Petite Anggi has distinctive reddish-brown hair and now 14 years old and weighing 34.2 kilograms, it is time for Anggi to be returned to natural forest in the Bukit Baka Bukit Raya National Park. 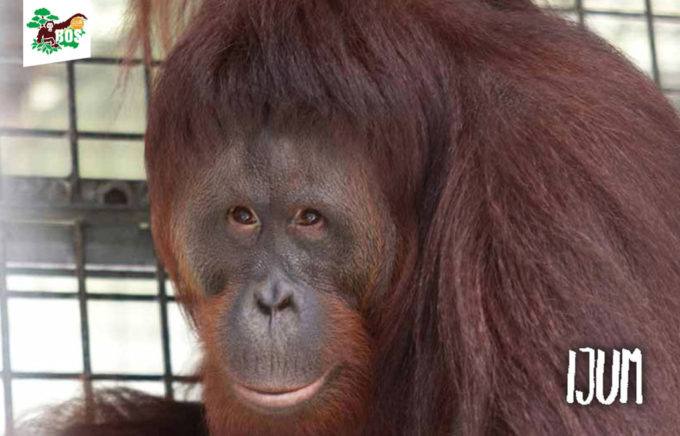 Ijum was rescued from a local resident in Palangka Raya, Central Kalimantan, on September 13, 2007. She was 2 years old and weighed 9 kilograms when she arrived at Nyaru Menteng, and exhibited wild behaviour. On December 20, 2012, she was relocated to Bangamat pre-release island.

Ijum, who has long and thick reddish-brown hair, will kiss squeak to express her displeasure when she senses human presence. Ijum is easily identified by her black face and small eyelids.

With the skills she has acquired over her nine years of rehabilitation at Nyaru Menteng, Ijum – now 12 years old and weighing 56.8 kilograms – is ready to live in the forests of Bukit Baka Bukit Raya National Park.

Rehabilitant orangutans are those rescued at a young age and/or confiscated from people who have kept them in captivity. These orangutans have limited knowledge and skills required to live independently in the forest, and therefore need to undergo a lengthy period of rehabilitation. 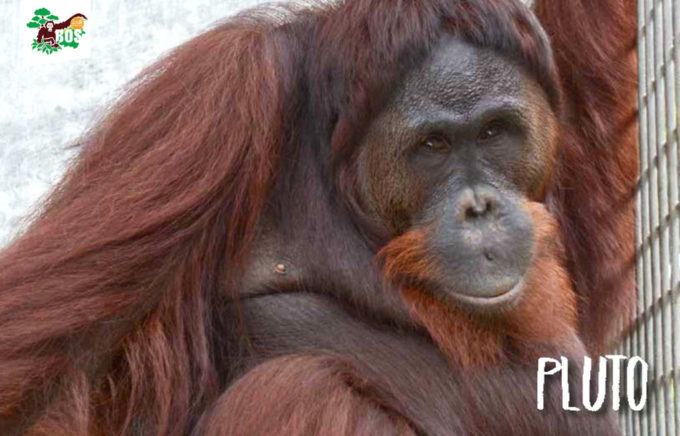 Pluto came to Nyaru Menteng on December 29, 2002, after being rescued from a local resident of Kapuas Regency who had kept him as a pet for two years. He was 2.5 years old and came to us in a critical condition – he was severely underweight at 3.8 kilograms, had multiple wounds to the face and chest, and a large skin graze on his arms and legs. His right eyelid had congealed from an infection and could not fully close, and his skin was dark from severe dehydration. He had irregular breathing, a swollen liver and very short, thin hair.

Pluto received treatment for five years under the care of our dedicated Nyaru Menteng medical team before he was finally well enough to join Forest School and begin the long process through rehabilitation. On February 28, 2015, Pluto was moved to Bangamat Island to complete his learning.

During his time on Bangamat, Pluto has turned into an extraordinary explorer and a good forager. Now 14 years old and weighing 58.7 kilograms, Pluto has a bulky frame and thick, long blackish-brown hair. His sharp gaze and blackish-coloured face decorated with thick golden beard make him a striking figure indeed. With the skillset he has developed, he is now ready to live in the Bukit Baka Bukit Raya National Park. 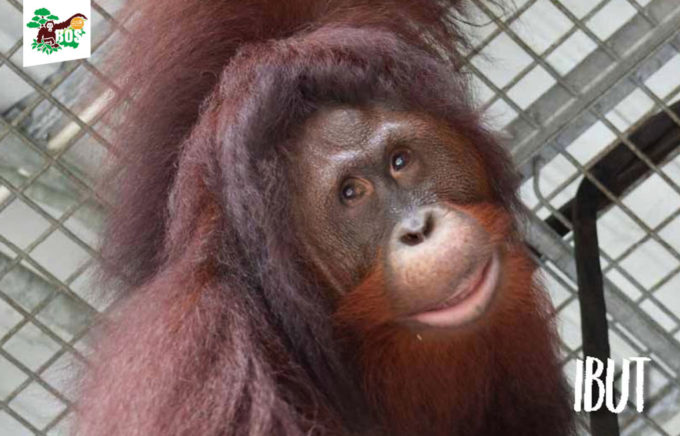 Ibut came to Nyaru Menteng on November 15, 2006, after being rescued by a joint-team from the Central Kalimantan BKSDA and the BOS Foundation Nyaru Menteng. Ibut had been kept as a pet by a local resident from Parigi village, Katingan Regency, Central Kalimantan. Upon arrival he was 2.5 years old, weighed 6 kilograms and was in general good health.

However, on July 29, 2011, some of Ibut’s fingers had to be amputated from the knuckle down to stop an infection from spreading. He spent a period in intensive care before being transferred to Bangamat Island on December 21, 2012. During his time on the pre-release island, Ibut has proven he is capable of competing with others and now shows displeasure toward humans.

This handsome, blackish-brown haired male is easily identified by his oval-shaped face, dark temple and thin beard. Now 13 years old and weighing 49 kilograms, Ibut will no doubt expand the on survival skills he has learned over 10 years of rehabilitation when he moves to the natural forests of the Bukit Baka Bukit Raya National Park.

Gurita was rescued on April 4, 2006, when she was 4 years old and weighed 14 kilograms. She had been kept as a pet illegally by a local resident in Parenggean village, East Kotawaringin Regency, Central Kalimantan.

Following her quarantine period, Gurita joined other orangutans and started the rehabilitation process through Forest School. She completed Forest School on June 29, 2013, and moved to Kaja pre-release island, where she befriended Beda and Chanel. Gurita, who has long and thick dark-brown hair, is alert but not aggressive and likes to be alone. During her time on Kaja, she has proven to be a great explorer and forager, and has a strong dislike for human presence.

Gurita is now 14 years old and weighs 59 kilograms. She has dark skin, a bulky figure, and round face framed by a fringe. After 10 years of rehabilitation, Gurita will soon be free in the Bukit Baka Bukit Raya National Park.

2016 marks the BOS Foundation’s 25th anniversary! Celebrate 25 years of ever-challenging, dedicated work in the field of orangutan conservation by showing your support and help save orangutans!