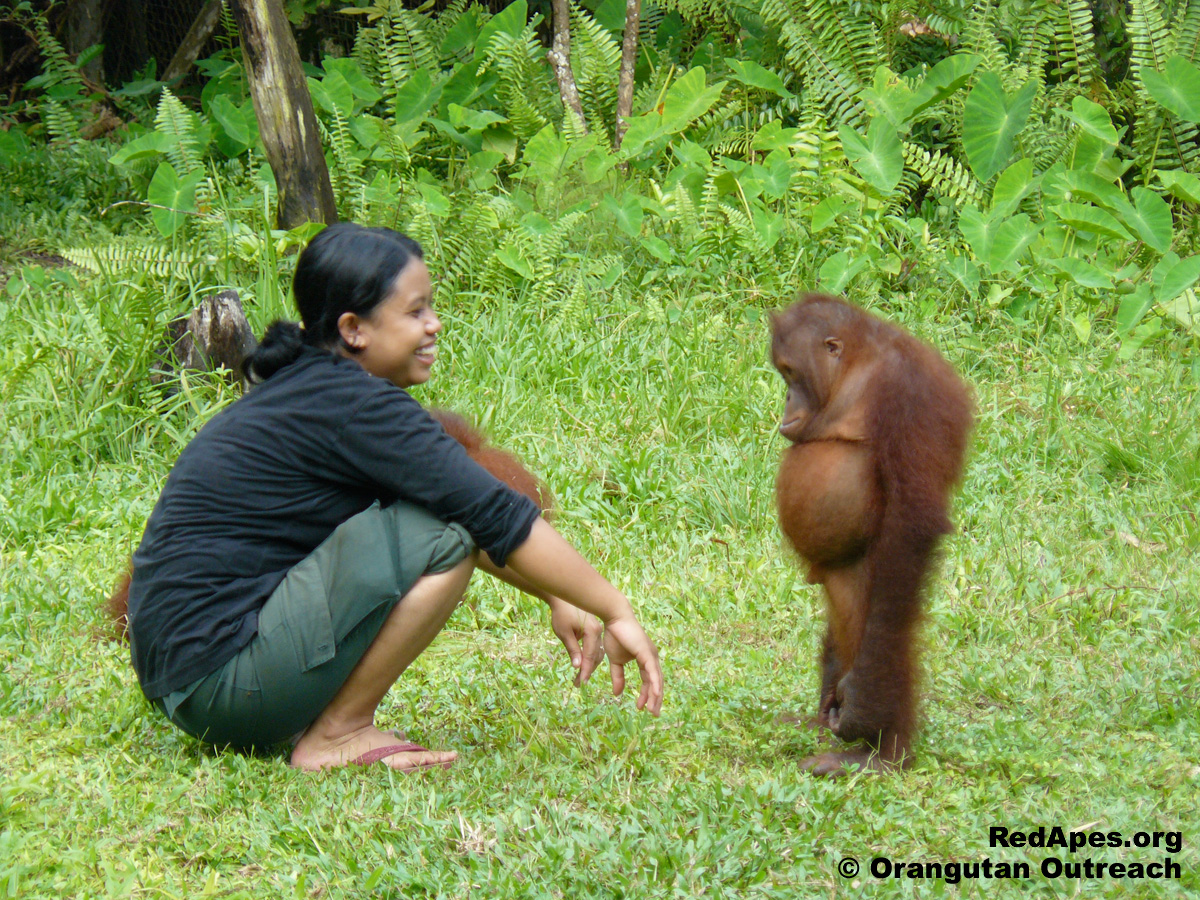 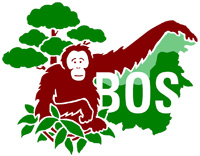 The BOS Nyaru Menteng Orangutan Rescue Center was founded in 1999 by Lone Droscher Nielsen (who is now retired) and is managed by the Borneo Orangutan Survival Foundation. It is home to around 450 orphaned and displaced orangutans.

Nyaru Menteng is located just outside the capital city of Palangka Raya in the Province of Central Kalimantan in Indonesian Borneo. Since its humble beginnings, the center has grown into the largest orangutan conservation facility in the world— with numerous cages, clinics, islands, vehicles and training forests— and hundreds of dedicated professional staff. The current manager of the center is Pak Denny, who— along with his amazing team— has overseen the most remarkable orangutan release program in history. Learn more about the orangutan releases. 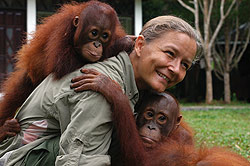 The secure forest around the main center serves as the perfect place where young orangutans are taught how to survive in the wild. Five small islands in the river nearby are also used as the first 'practice' home for the orangutans as they begin their new lives without their caretakers. The center also has its own fruit-plantation and a large nature reserve.

The Nyaru Menteng staff consists of around 200 people— nearly all of whom come from local villages. This number includes babysitters, tecknisi, assistants, medical and veterinary personnel, guards and other workers. The number of orphaned and displaced orangutans currently being cared for at Nyaru Menteng is approximately 450. 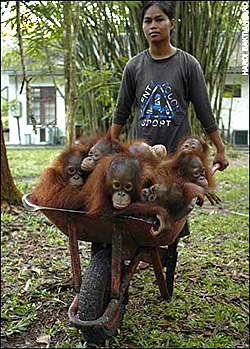 The center sits in a forested area which also functions as a wild, botanical garden. It has been under the responsibility of the local forest authorities and displays a rich biodiversity in both plants and wildlife. The edge of the forest is often used as a recreational area by students from the University of Palangka Raya, and during the weekends, local people also come from the city to spend time in the forest.

There is an information center at Nyaru Menteng that is open to visitors, but the primary facility is not open to the public. Education and information are important tools in the fight against illegal deforestation and the killing of orangutans. Therefore local schools are invited to visit the center, and information campaigns about alternatives to cutting down the forest are sent out all over Borneo. On Sundays the information center is open to everyone. Outside visitors are strictly forbidden from coming into close contact with the orangutans at the center for health and safety reasons. The orangutans are learning to become wild and it is therefore imperative that they have as little contact with humans as possible. They are also extremely susceptible to human contagions.

When an infant orangutan is taken away from his or her mother, they lose a lifetime of early learning and natural development. The purpose of rehabilitation is to equip orphaned orangutans with the skills they need to survive once they are old enough to be reintroduced to the forest.

Newly arrived infants and very young orangutans spend the day in a forested nursery where they are cared for 24/7 by their babysitters. Their health is carefully monitored as many of them have come to the center severely malnourished and they are extremely susceptible to illness due to having compromised immune systems. Many of them had been raised as pets after their mothers were slaughtered and precious few have been lucky enough to survive the ordeal of life without the one perosn they depend on most: their mothers. In the wild, an orangutan would spend the first 6 or 7 years of his or her life with their mother. It is this loss which the rehabilitation process needs to make up for. In Baby School, the orangutans learn to climb and move around in trees. They begin to experiment more with new fruits and also begin to interact closely with one another. After a few years in Baby School, as they grow stronger and more independent, the orangutans move up to Forest School. 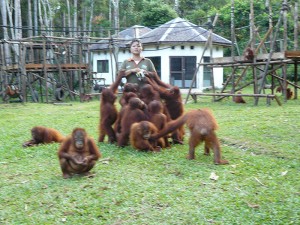 In Forest School, the orangutans begin to truly develop the skills they will need to survive as adults in the wild. Climbing and nest building as well as swinging and maneuvering amongst the trees are skills that they now practice every day. They continue to learn about new foods and also learn about things to avoid— such as snakes! They now come into contact with a lot more orangutans. They are in groups or 'classes' ranging from approximately 8 - 12 individuals with who they will essentially 'grow up'. The brilliant series Orangutan Jungle School, seen on the Smithsonian Channel in the US, depicts this stage of their lives in great detail.

Orangutans in Forest School spend the entire day in the nearby peat forest— only returning to the main center in the late afternoon to have a snack, drink some milk and get some sleep. This afternoon ritual takes place on the famous Nyaru Menteng main lawn, which can be seen in the photo at left as well as at the top of this page (The Standoff).

The islands are the penultimate step in the rehabilitation of orphaned orangutans. There are 5 river islands: Kaja, Palas 1 and 2, Hampapak Matei and Bangamat. They are all islands in the Rungan River, which runs behind the Nyaru Menteng veterinary clinic. From there, there is a mere 15 minute drive to the small village of Sei Gohong, which is the most important harbor in the area. There are only minimal feeding-platforms and jetties on the islands so as to keep the setting as natural as possible.

The series Orangutan Island on Animal Planet gave viewers a first-hand view of life on the islands, following the adventures of Forest School 103 as the orangutans grew more independent. The series features Kaja Island, the first island acquired by Nyaru Menteng and home to some of the top orangutan students. These guys have no interest in humans and are first on the list to be released to the wild.  The series ended in 2010 but is still available on DVD in the Orangutan Outreach online shop.

Orangutans who have gone through the rehabilitation process are brought to the islands for at least 2 dry seasons and one wet season to make sure they can cope with the fluctuations in food availability. They are given supplemental food twice a day, but in the dry season the staff purposely does not increase the amount, so that the orangutans will learn that there are lean times in which they will have to depend more on leaves rather than fruit-- just as they would in the wild.

The islands are large and hold as many as 50 or more individuals. In the wild they would of course be more spread out because of the dispersal of food resources. Some will become naturally more independent and solitary and others will remain in small groups, learning and exploring the forest together, but they will also eventually start to go their own way-- which is a good sign that they are ready for life in the wild. They will be released in small groups as well, where they will have the choice to stay together or to venture out more on their own.

The orangutans on the islands must all be sighted at least once a day by staff. Otherwise they are considered missing and an immediate search party goes out until the orangutan is found. This allows the team to intervene if the orangutan is in trouble, injured or very ill. It can take days on the larger islands to locate a missing orangutan so the teams must act quickly. There is 24/7 security for the islands, but the posts are on the opposite banks to ensure minimal interaction with humans. As BOS successfully releases more orangutans into the wild, other younger orangutans are moved to the islands. 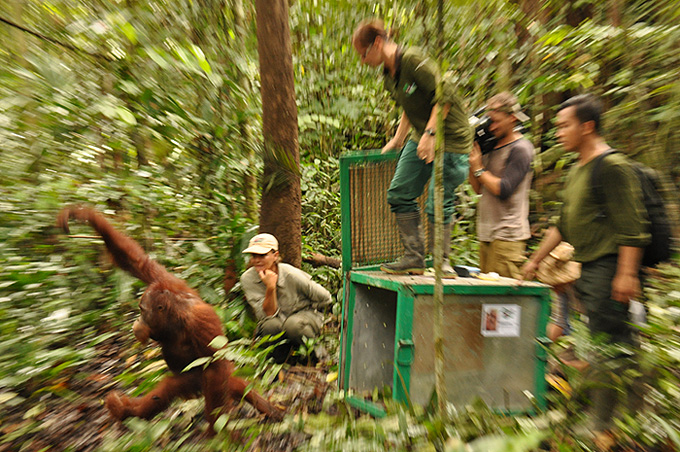 Presently there are a number of orangutans who have spent well over the required time on the islands and are ready for release back to the wild. This requires additional funding and a lot of logistical planning. The season has to be right, the ground and air transport need to be in place and the orangutans must be ready to go! BOS began a massive release program in 2012 and the first group of rehabilitated orangutans has now gone back to the forest! Learn more about the orangutan release here.

It is crucial that BOS Foundation continues to release more orangutans in order to make room on the islands for the next group who are ready to leave Forest School. To do this we need your support!

You can directly support the BOS Foundation by adopting Monita, Bumi, Topan, Jelapat, Monyo or Big Papa for just USD $15/month (or USD $150/year). Learn more about them on our adoption page.

Click on the image below to read about and adopt Monita. 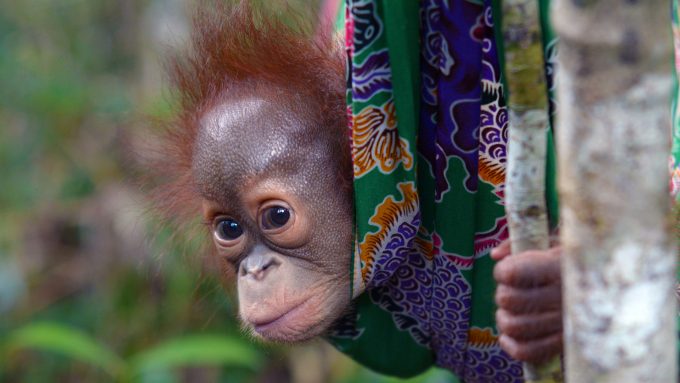 Click on the image below to read about and adopt Bumi. 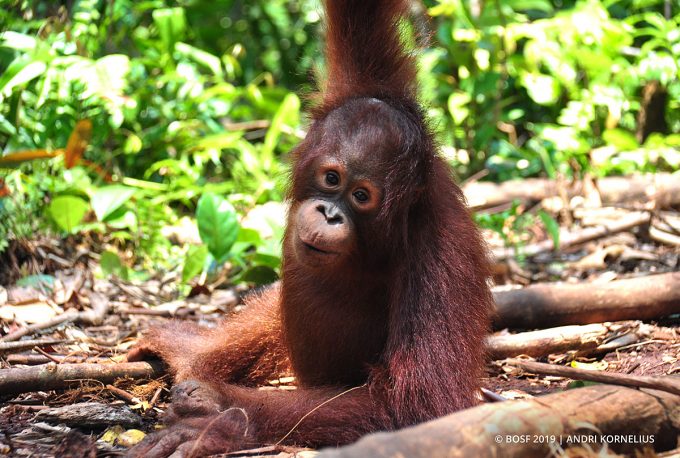 Click on the image below to read about and adopt Topan.

Click on the image below to read about and adopt Monyo. 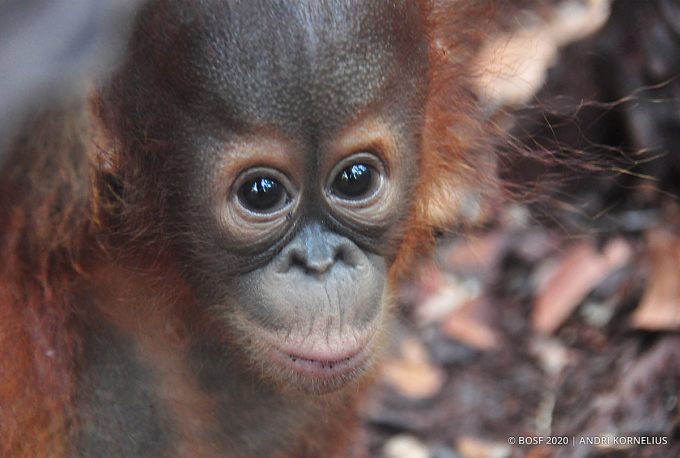 Click on the image below to read about and adopt Jelapat.

Click on the image below to read about and adopt Papa. 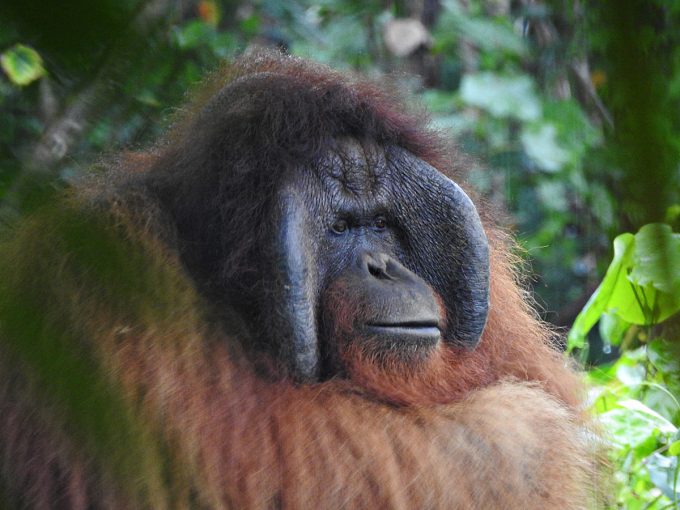