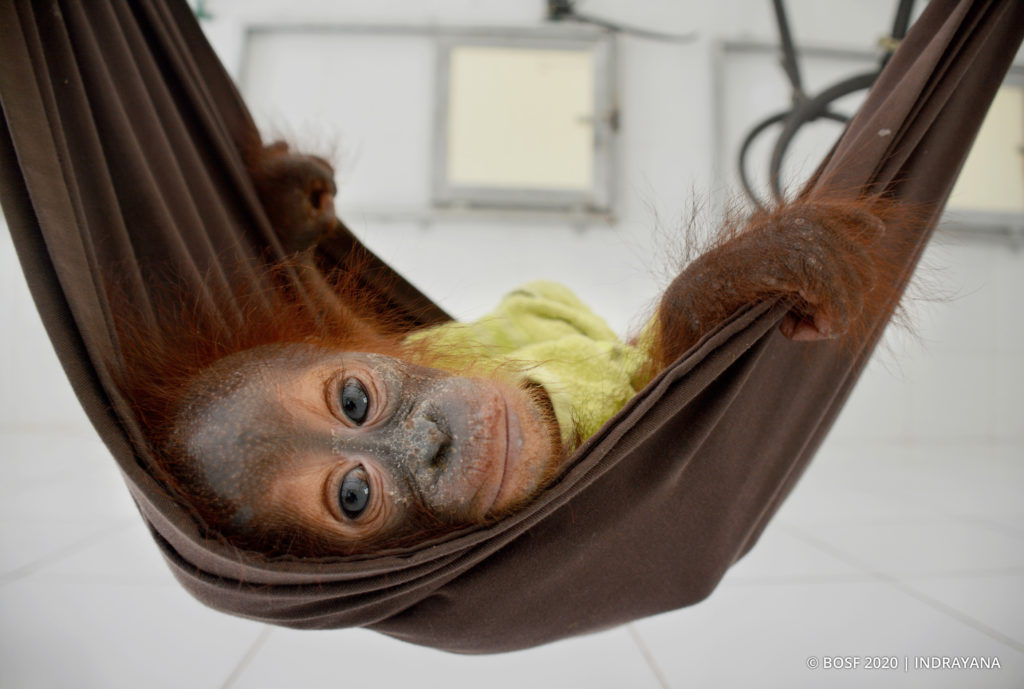 Baby Keladan is just one of the new arrivals at BOS Nyaru Menteng in Borneo.

During 2020, BOSF rescued 12 orangutans that desperately needed help. Even during the pandemic, BOSF continued its vital orangutan conservation work, and brought orangutans in to the Nyaru Menteng Orangutan Rehabilitation Center. Here, we highlight three babies that were rescued in 2020 and are now under the care of BOSF. 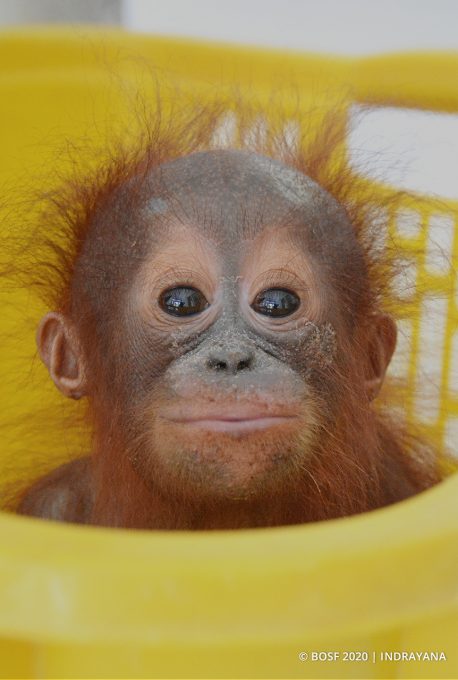 The first baby rescued by BOSF in 2020 was a 1 year old male now called Keladan. The baby orangutan was said to have been found stranded alone near a farm and was kept by a farmer for about a month. As usual, there was no information on the baby's mother. (Note: A mother orangutan will under no circumstances abandon her baby.) During the rescue, Keladan was in a weakened state and running a high temperature. Upon arrival at the Nyaru Menteng Center on January 21, the baby was placed in quarantine and the medical team performed a general health check on him. Keladan required intensive care from the BOSF team of medics and surrogate mothers. Weighing only 3.3 kilograms, he had to undergo two months of quarantine before joining other orangutans in the nursery group. This beautiful young baby will now have years of rehabilitation ahead of him.

Jeni, a female baby orangutan, was brought to the Nyaru Menteng Center on August 24. Upon her arrival at the centre, 10-month-old Jeni weighed only 5.0 kg. She had dry skin and wounds on her back and one of her legs. From these wounds, it was evident that Jeni had experienced a traumatizing time in captivity. In her early days of quarantine, Jeni had difficulty adjusting to her new surroundings. She was having problems with her leg injury and was showing signs of shock. This was not surprising, since she had not long ago experienced the trauma of being separated from her mother. The BOSF medical team and surrogate mothers were determined to ensure that Jeni would feel comfortable and safe in her new environment. Jeni has since grown comfortable with her new life, and in September joined the other young orangutans in the Forest School Nursery Group. She now shows love for climbing trees and has a healthy appetite. 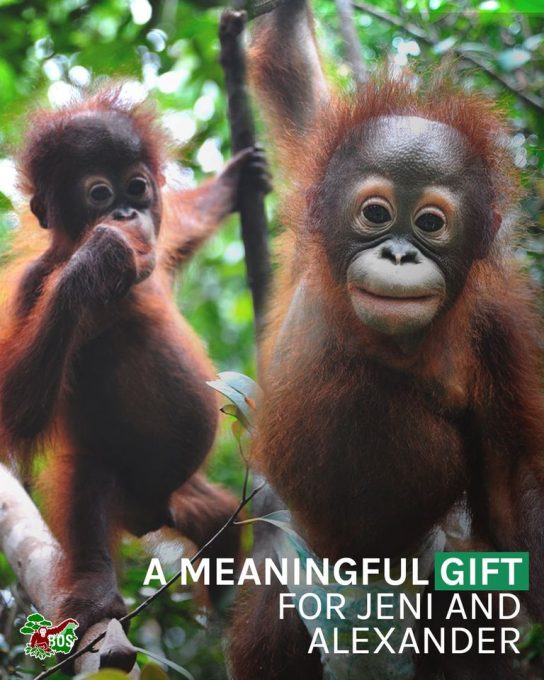 Nine month old Alexander was rescued on August 25. He was claimed to be found by a village resident. The Pahawan resident who found Alexander alleged that he had seen an adult female orangutan being attacked by a dog. The female was carrying a baby at the time, but had fled the scene in a panic and left her baby behind. The resident took the baby and placed him in a cage for about a week, before he was collected up by a team from the Central Kalimantan BKSDA.

After 11 days of treatment in a BKSDA facility, Alexander was handed over to the Nyaru Menteng Center on September 5. During the routine examination it was found that he weighed only 3.5 kg. He also had dry skin, matted hair, and wounds on both legs and arms.

During his two months of quarantine, Alexander experienced digestive problems and his stomach was visibly bloated. He initially refused to drink the milk offered by the surrogate mothers. As with Jeni, Alexander was going through a stage of grieving, after losing his mother. The BOSF team continued to work hard to ensure that Alexander felt comfortable and safe.

Alexander is now showing positive signs he is recovering from his trauma and adjusting to his new life. In early November, he joined other young orangutans in the Forest School Nursery Group. He now enjoys playing in the trees with his new friends, including fellow new arrival, Jeni.

The economic impact of the Covid-19 pandemic on the local community surrounding the BOS Nyaru Menteng center has been significant. The negative impact on the economy has brought a renewed threat to nature, including to the precious orangutans. People have been severely affected by the lack of jobs and income, causing them to return to illegal activities that are damaging to wildlife and the natural environment, such as poaching, illegal mining and illegal logging. We appreciate your continued support as we work to protect the orangutans and their forest home.

The Orangutans at BOS Nyaru Menteng Need Your Help!