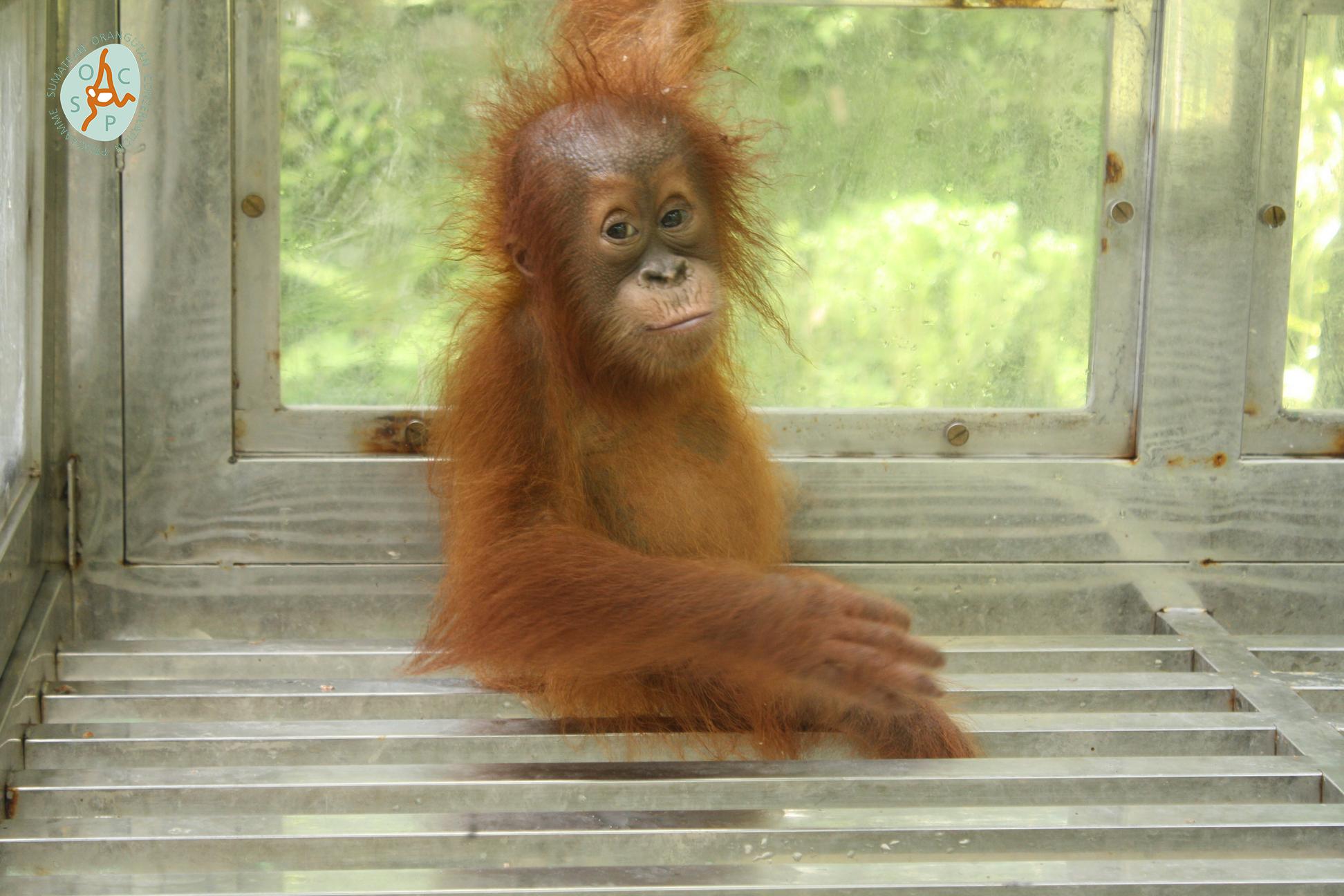 Baby Turnip is just one of more than a dozen new arrivals at the SOCP Quarantine in Sumatra.

Text by Orangutan Outreach and SOCP 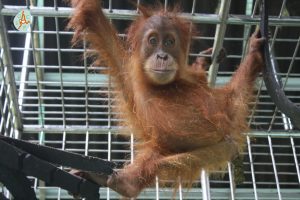 Here's a snapshot of all the new arrivals at the SOCP Quarantine.

The first new arrival was a young male orangutan, estimated to be 3 years old, named Max. He arrived at the Centre in January. Max was found in a farmer’s family who said that they had already taken care him for few weeks. They claimed they found Max alone, without his mother, in their farmland. Another story that is hard to believe. Max was not in good condition when confiscated. He was dehydrated and malnourished. 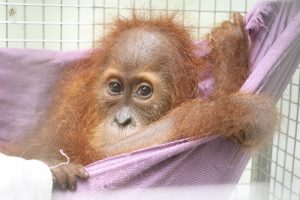 The second and third new arrivals were Bob & Urnip (Turnip). They were brought to the SOCP Center by OIC on the same day that Max arrived. According to the evacuation team these two orangutans were allegedly poached and destined to be sold as pets. The evacuation team did not meet the perpetrator and only met his wife and these two poor orangutans. The government officer will investigate this case further. 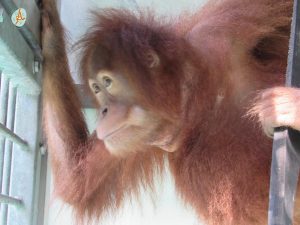 The fourth, a juvenile female orangutan, named Jayanti and estimated to be five years old, was confiscated by BKSDA Aceh from an illegal owner in Pidie Jaya, Aceh. Jayanti arrived the day after Max, Bob and Turnip. The case is under further investigation by the government officer. 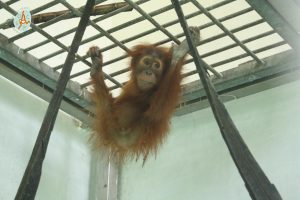 he fifth was a male orangutan estimated to be three years old, named Ipi, confiscated by BKSDA Aceh. Ipi arrived in late January in bad condition, very skinny, with a bone fracture on his leg, and depressed. 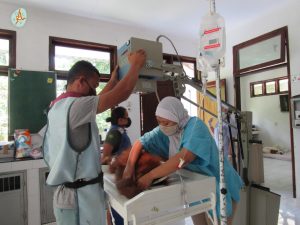 The sixth and seventh were a wild mother and a daughter, who local villagers claimed had fallen from a tree in Bukit Lawang inside Gunung Leuser National Park (GNLP). Guides who found them in the morning near where they camped a night before brought them to the GLNP office in Bukit Lawang. Keropi, the mother who is estimated to be 25 years old and Aras, the daughter, is estimated to be four years old.

Both were severely injured and unconscious when they arrived at the SOCP Centre in early March. The SOCP team quickly conducted emergency treatment to maintain their vital signs. The team also X-rayed the entire bodies of both Keropi and Aras. The next morning, Aras woke up and cried a lot as she was in pain from her multiple injuries. 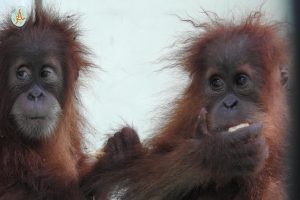 The eighth and ninth were two infant male orangutans named Opid and Ona, estimated to be two years old, were evacuated from Bukit Lawang, Bohorok, North Sumatera by OIC, Gunung Leuser National Park staff and BKSDA staff in mid-March. No other information was available about these two orangutans. 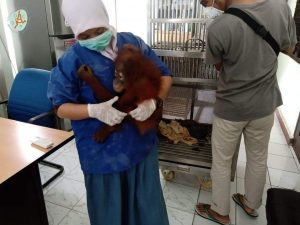 The tenth arrival was Haryo, an infant male orangutan estimated to be about one and a half years old. Haryo was evacuated by the SOCP team and BKSDA Riau after smugglers were caught by BKSDA in Pekanbaru, Riau Province. 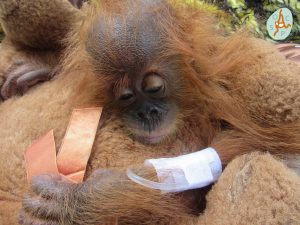 Siska, the eleventh rescue is an infant female orangutan estimated to be one year old, evacuated from Jambu Papuen Village, District Trumon, South Aceh Regency by BKSDA Aceh and Orangutan Information Centre. Siska arrived in early April with very poor condition, weakness and difficulty in breathing, and she was depressed. The SOCP vet Team and the keepers quickly conducted emergency treatment to maintain Siska’s vital signs.

During Siska’s pre-quarantine medical check-up, the SOCP vets, Dr Yenny Saraswati and Dr Meuthya, found liquid in the right chest, oedema in many parts of her body, dehydration, malnutrition, and dyspnea (difficulty in breathing). 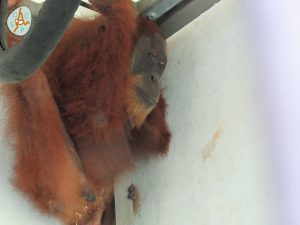 Hulu, the twelfth rescue, an adolescent wild male orangutan estimated to be ten years old was rescued by BKSDA Aceh and OIC from village farmland. Hulu arrived in mid-April and was placed in the quarantine area specifically to accommodate orangutans that arrive during the COVID-19 pandemic.

Hulu had his pre-quarantine medical check-up a day after he arrived at the Center. Similar to Siska, he underwent a physical examination, sample collection of blood, fecal, and tracheal wash, put ID and radiography. The vets found seven air riffle bullets in his body. 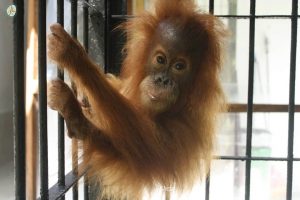 On June 15th, SOCP received their thirteenth rescue, a female baby orangutan thought to be around 2 years old that was named Siandorulia.  She was claimed to be found by a local resident three days before being confiscated.

Siandorulia is still very young and it will take a long time to prepare her to return to the wild. During this pandemic we also need to take extra precautions to prevent them from being infected by the virus. 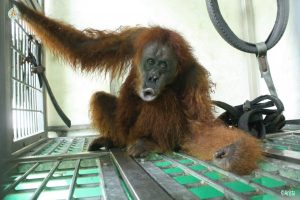 The fourteenth arrival was a female female orangutan thought to be around 16 years old and named Maria. Maria was rescued by the OIC team and arrived at the center on June 18th. 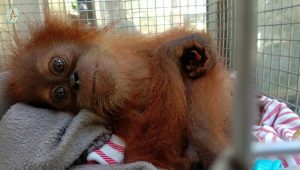 On August 8th, the fifteenth baby orangutan arrived at SOCP's Quarantine. This baby is male and thought to be less than one year old. He was named Kike.

Kiki was brought to SOCP by OIC. From the information that we received, he was found in a small cardboard box at Leuser National Park and it was unknown who left this poor little guy sitting there in a box. No serious health issues were found when he arrived, but he will nevertheless receive intensive care from the SOCP team because he was separated from his mother at an age where he still very dependent on her for his every need...

But just when we thought there were no more new arrivals coming.... Nine smuggled orangutans were repatriated back to Sumatra from Thailand... and are now being cared for at the SOCP Quarantine! Stay tuned for more info on this Christmas miracle! 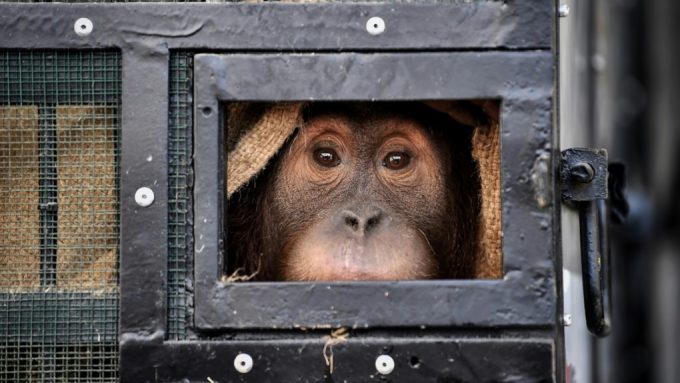 In 2020 SOCP was not able to release any orangutans back into the forest due to the pandemic. Therefore these new arrivals have drastically increased the total number of orangutans being cared for at SOCP— especially babies.