The BOS Foundation has released more than 170 orangutans to the Bukit Batikap conservation forest in Central Kalimantan since 2012, giving rescued orangutans a second chance at life in the wild. Prior to being released to this natural environment, each of the orangutans underwent years of rehabilitation at BOS Nyaru Menteng to learn the skills they would need to survive alone in the forest.

Some of the orangutans BOS first released five years ago can no longer be located, as the batteries in their transmitters have gradually worn out. The post-release monitoring (PRM) team conducts regular observations following each release, to check that every orangutan is thriving in their new environment. Once the transmitters stop working, they have to trust the orangutans' ability to make it in the wild without human intervention.

However, even without working transmitters we are sometimes lucky enough to encounter some of our 'old released' orangutans during patrols. Like Monic, from the first release, who gave birth to a male now four years old and full of energy! Or, like Ebol, who was also released five years ago: 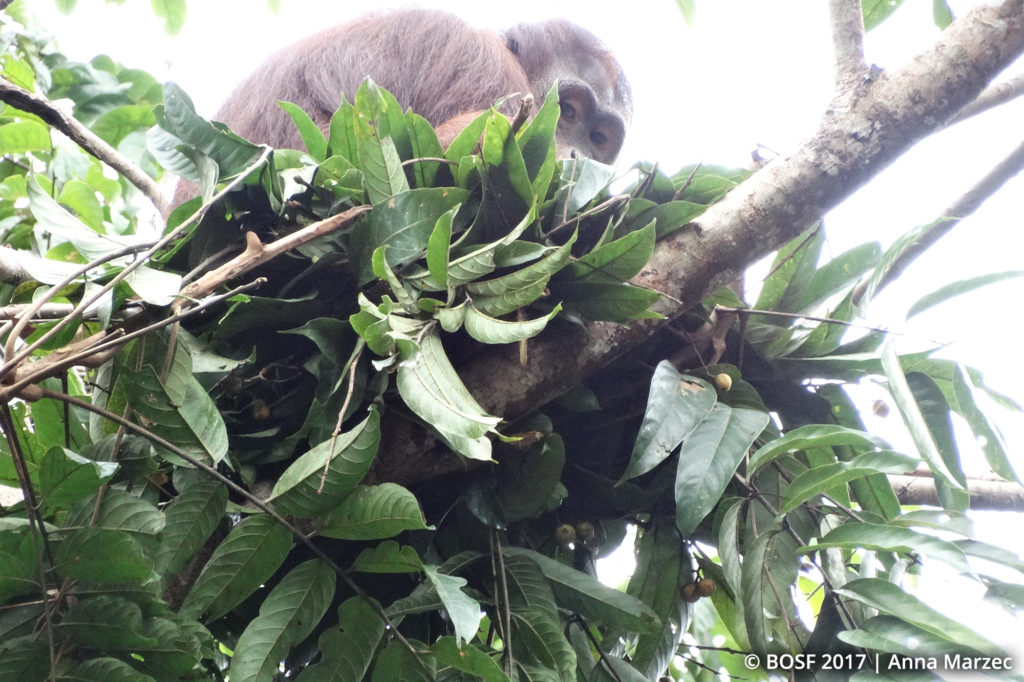 One of our PRM team members spotted her at the beginning of August this year, during a riverside patrol. As Ebol hadn't encountered people for quite some time, she appeared shy and curious as she sat and watched her observers as intensely as they watched her. After a while, she went back to foraging and eating rattan shoots. Our team members were surprised to see her devour a large amount of forest food, seemingly undeterred by their presence. 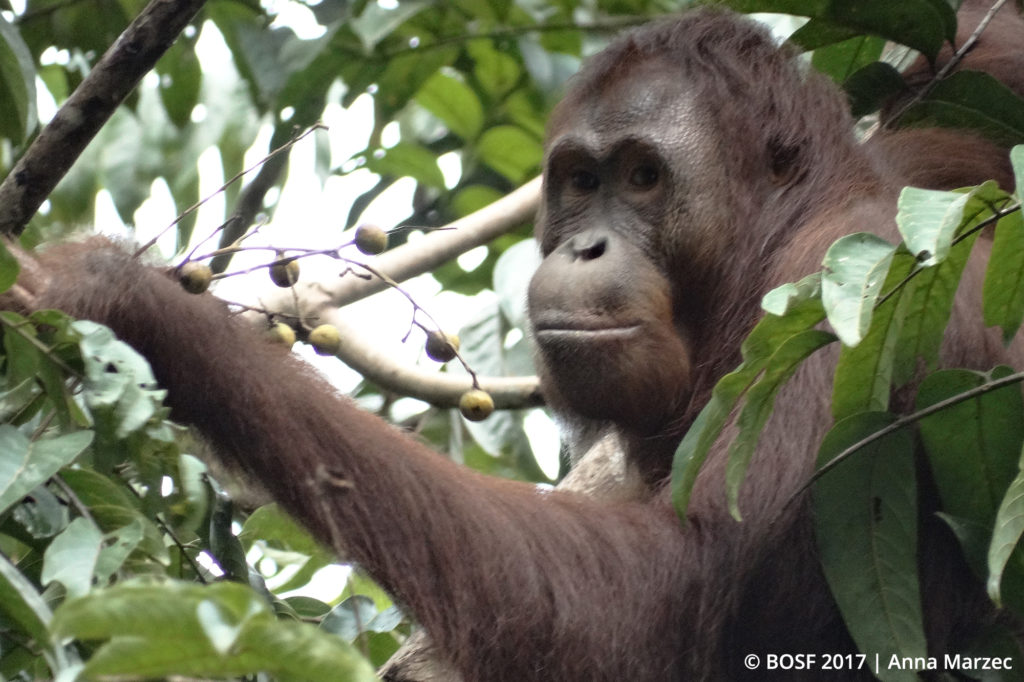 While observing Ebol, the team noticed her enlarged genitals, indicating she was pregnant! Team members estimated that she was most likely still in the first trimester of her pregnancy. As this mother-to-be has no working transmitter, all we can is hope that we will bump into her again in the future – hopefully next time cradling a little baby!

This wasn't the only surprise! Indeed, in the middle of August, the team came across Meklies, a shy female who was never comfortable with observers tracking her. They were fortunate enough to observe her for three days, during which she maintained her typical behaviors: staying high up in the trees, and evading her observers. She also spent a lot of time feeding in the same tree, especially on the third day of observation when she spent more than five hours eating lunuk. She even built her night nest in the tree, which is uncommon among orangutans, who typically don't build nests in feeding trees. 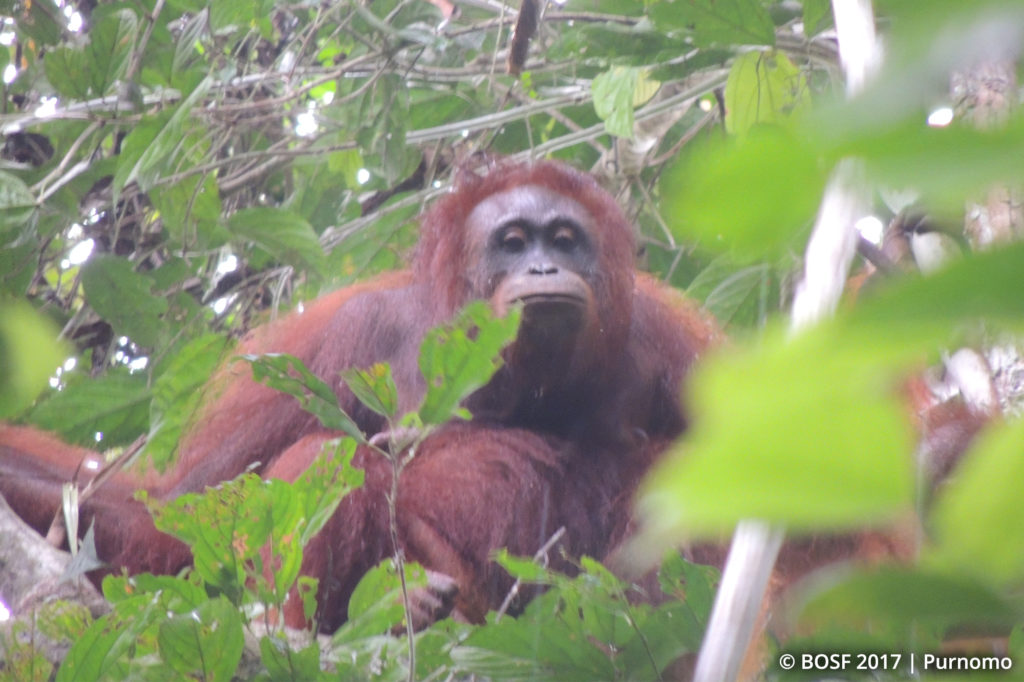 One of our technicians finally managed to capture a decent picture of this shy lady, which showed that she too, like Ebol, had swollen genitals. But unlike Ebol, Meklies seemed to be already at the end of her pregnancy, and since she still has a working transmitter the team will be able to locate her and see her infant in the near future!

The PRM team is very excited to report these latest developments about the two pregnancies. Like proud parents, we are utterly delighted to learn that our released orangutans are not only surviving, but thriving in the wild, and successfully reproducing. We can't wait to see the next generation to come from these individuals in the wild paradise of the Bukit Batikap! 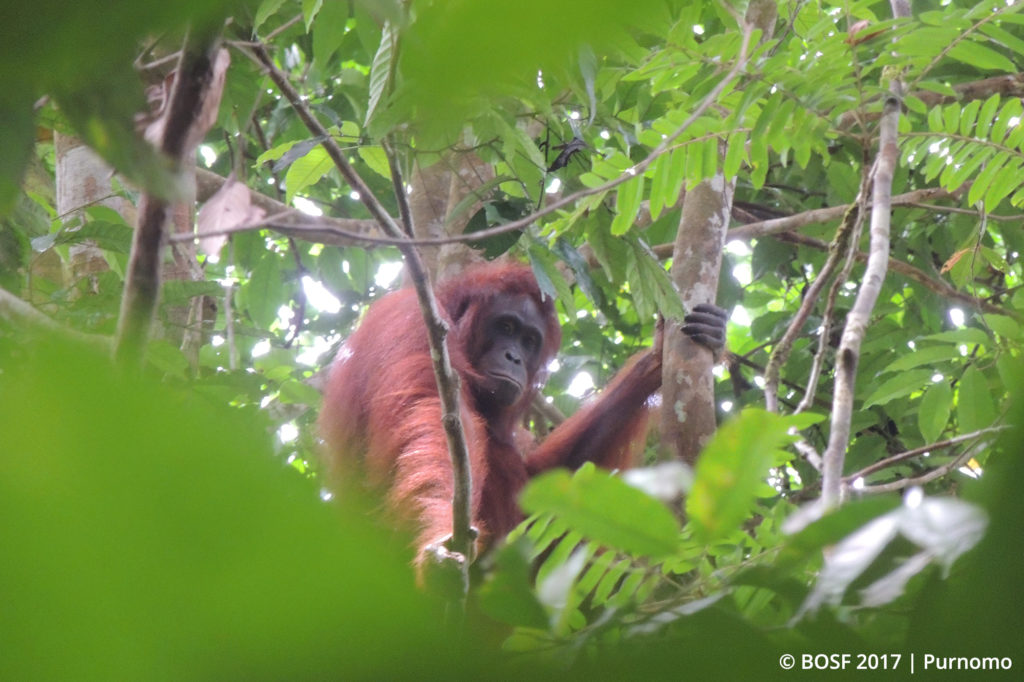