JAKARTA — Bank of China has promised to evaluate a hydroelectric project it is helping fund in Indonesia, which activists say threatens the only known habitat of the Tapanuli orangutan, the rarest great ape species on Earth.

“Bank of China will evaluate the project very carefully and make prudent decisions by duly considering the promotion of green finance, the fulfillment of social responsibility as well as the adherence to commercial principles,” the Chinese state-owned bank said in a statement on its website.

The statement was dated March 4, three days after activists staged a series of coordinated protests outside BOC branches and Chinese diplomatic missions in cities including Jakarta, New York, Hong Kong, Manila and Johannesburg.

The activists called on BOC to rescind its funding for the $1.6 billion Batang Toru hydropower project, saying that allowing it to proceed would devastate the most critical areas of the Batang Toru ecosystem in northern Sumatra and drive the Tapanuli orangutan (Pongo tapanuliensis) to extinction.

BOC said it had noted the concerns, adding that “[w]e attach great importance to corporate social responsibility in our global operations and ensure that our business activities abide by local laws and regulations. We are committed to supporting environmental protection globally and upholding the principles of green finance.”

The timing of the statement also coincided with a ruling by a court in Indonesia that rejected a lawsuit brought by a green group to scrap the environmental permit issued to the project developer. The Indonesian Forum for the Environment (Walhi) had argued that the decision by local authorities to issue the permit was deeply flawed. Among the irregularities it cited was a claim by one of the scientists hired to carry out an impact assessment that his full findings were omitted and that his signature on the document submitted to obtain the permit had been forged. 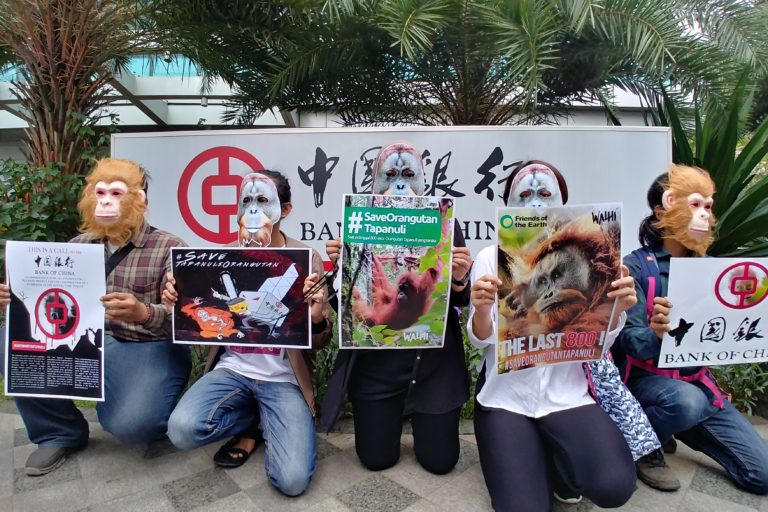 Caption: Activists from Walhi staged a protest outside the Bank of China office in Jakarta, Indonesia. Image by Hans Nicholas Jong/Mongabay.

Activists say they are hopeful the statement by BOC that it will evaluate the project may achieve what the lawsuit failed to do.

“We are confident that a review of the information will lead to cancellation of the project, and are happy to help provide any information,” Glenn Hurowitz, chief executive of the U.S.-based global environmental campaign organization Mighty Earth, told Mongabay.

But others are skeptical, saying the noncommittal wording of BOC’s statement made it unclear whether it would take concrete steps beyond the evaluation, such as suspending the financing. Dwi Sawung, chief campaigner for energy issues at Walhi, said this should be the very least the bank could do if it was truly serious about addressing the concerns over the project.

Continuing to fund it, he told Mongabay, “is the same as allowing destruction [of the orangutan habitat] to go on.”

William F. Laurance, a professor at James Cook University in Australia who led a major study of the Tapanuli orangutan, also said the statement rang hollow.

“The response by the Bank of China is merely a vacuous promise to follow ‘green principles’ in its lending practices,” Laurancehe told Mongabay. “The words are hollow. Hidden between the greenwashed lines, however, are more pithy realities.”

Laurance, a member of Mongabay’s advisory board, is also the director of the Alliance of Leading Environmental Researchers & Thinkers (ALERT), which last year called on the Indonesian government to stop the project.

Laurance said the fact that BOC agreed to finance the Batang Toru project when other major financial institutions stayed away from it indicated the bank’s disregard for the environmental risks associated with the dam.

“The project is awash in Chinese money,” he said. “And those funds are being used in many ways to pressure, obscure, and drive forward the development process — regardless of the powerful scientific evidence in opposition to the dam.”

Walhi’s Sawung said that regardless of BOC’s seriousness about reviewing the project, the fact that it acknowledged the criticism indicated just how severe the environmental threats posed by the dam were.

“I haven’t found other cases that BOC has responded to,” he said. “It’s a sign they ‘admit’ there are risks.”

BankTrack, an international NGO that tracks lenders and the activities they finance, tweeted that it was “unusual to get even this level of engagement from a Chinese bank.”

‘A great tragedy’
The 510-megawatt Batang Toru plant, the biggest in Sumatra once completed as scheduled in 2020, has been controversial from the outset because of its location in the only known habitat of the Tapanuli orangutan. The species was only described in 2017, and was immediately declared critically endangered and the world’s rarest great ape species.

Only 800 of the animals survive in a tiny tract of forest less than one-fifth the size of the metropolitan area that comprises Indonesia’s capital, Jakarta. Conservationists estimate that a loss of more than 1 percent of the population per year will be disastrous for the species, which has a low reproduction rate and is highly sensitive to disruptions in its habitat. Construction activity has already driven some of the orangutans out of the project area and into nearby plantations.

Mighty Earth’s Hurowitz said the Tapanuli orangutan had become a huge conservation priority for both Indonesia and the world, signaled by the intensifying call to stop the project from inside the country and abroad.

On March 5, prominent environmentalists and conservationists, including former U.S. congressman and chairman of Mighty Earth, Henry Waxman, and the chairman of the Ape Alliance, Ian Redmond, sent a letter addressed to President Joko Widodo, calling the president to cancel the project.

“We’ve been really struck, even in comparison to the work that we’ve done on palm oil which gets a lot of attention, on how much people really respond to the threat to the Tapanuli orangutan,” he said. “There’s a great sense of tragedy … if we lose this species so soon after identifying it.”

PT North Sumatra Hydro Energy (NSHE), the project developer, has long defended its activities as complying with regulations. As such, said Firman Taufick, a spokesman for the company, NHSE isn’t concerned about BOC’s decision to evaluate the project.

“Actually the message conveyed by BOC is the same as our principle, which is to support environmental sustainability and to follow existing regulations,” he told Mongabay. 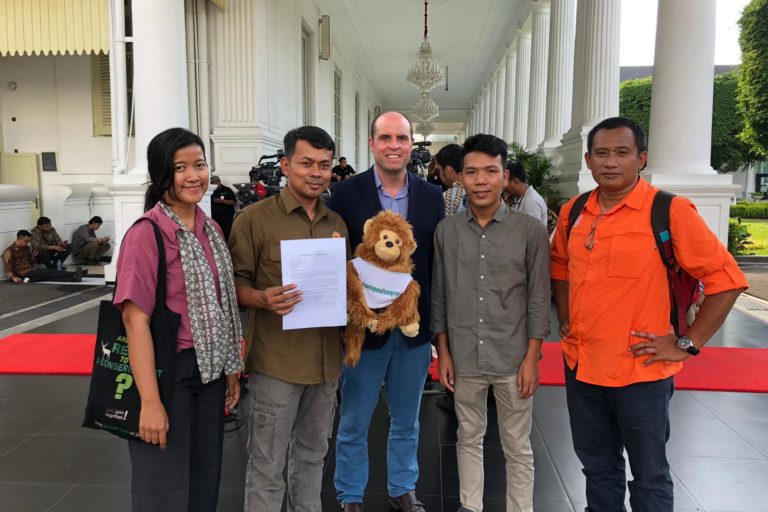 Caption: A coalition of international and Indonesian NGOs delivered a letter addressed to President Joko Widodo at the State Palace in Jakarta, Indonesia. The letter demanded the President to cancel the Batang Toru hydropower project. Image by the Coalition to Protect Tapanuli Orangutan.

‘Foreign intervention’
The project also has the full support of the government, as part of President Joko Widodo’s ambitious push to add 35,000 megawatts of new generating capacity to Indonesia’s grid in the coming years. (The initial target date was 2019, but the government now says it may take until 2024 to get that full capacity on line.)

Sonny Keraf, a former environment minister who now serves on the National Energy Council (DEN), a presidential advisory board, said the opposition to the project was unfair, and accused civil society groups of applying a “double standard” in their criticism of it.

“This is an inappropriate intervention into [the affairs of] the Indonesian government,” he said as quoted by the Sindo daily newspaper.

Foreign opponents of the project, he said, needed to realize that the Batang Toru hydropower plant was part of the government’s efforts to develop renewable energy in a bid to reduce its carbon emissions and mitigate climate change. He added that groups from the United States had no business criticizing Indonesia on this point, given the U.S. withdrawal from the Paris climate agreement.

Sonny also said that ending the project would force Indonesia to remain dependent on fossil fuels. Coal is the primary source for the country’s electricity.

“So instead of pushing the president to cancel a renewable energy project, it’s better for those NGOs to monitor the development [of the project] so that the risk of environmental impact can be mitigated and controlled,” he said.

He also criticized environmentalists for prioritizing the well-being of the orangutans over that of the people living without electricity in the area.

“Of course the orangutans have to be saved, but don’t make it a zero-sum game,” he said as reported by local media. “Don’t be eco-fascists, using violence to defend the environment and the orangutans while letting people live without electricity from an environmentally friendly energy source.” 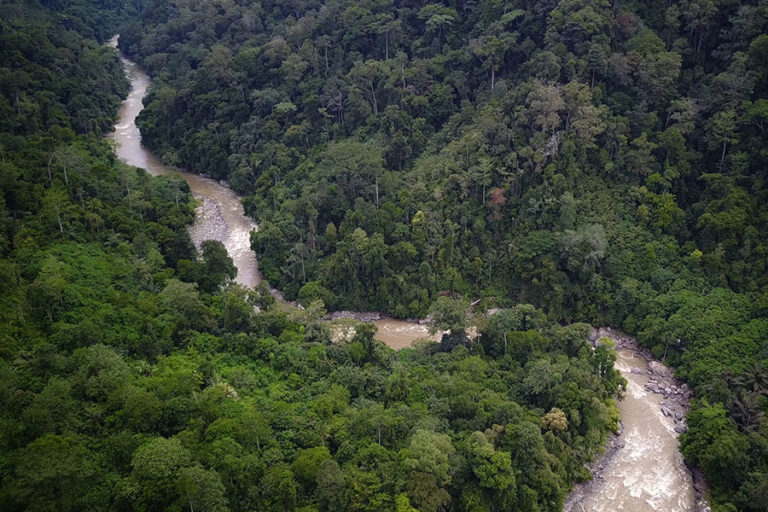 Panut Hadisiwoyo, director of the Orangutan Information Centre (OIC), said it was ironic for Sonny to criticize what he saw as foreign intervention by environmental activists, when it was a foreign government — China, through its ownership of BOC and project contractor Sinohydro — that was funding and building the plant.

“Is that not a form of a foreign intervention?” Panut said. “As investors, they obviously have the right to determine the policies of the project. BOC itself has stated in its response to international pressure that China supports environmental protection globally and adheres to green funding principles. It means that China admits that foreign countries have an obligation to support environmental protection globally.”

Panut said his group and others would continue calling on the Chinese government to withdraw from the project.

“Chinese investment has the potential to do a lot of good, but this project risks tarring the reputation of the Belt and Road Initiative,” he said. “We hope that the Chinese government will reconsider this project in light of the discovery of the Tapanuli orangutan.

He added, “Can you imagine a foreign-funded project that threatens the giant panda with extinction ever being approved?”