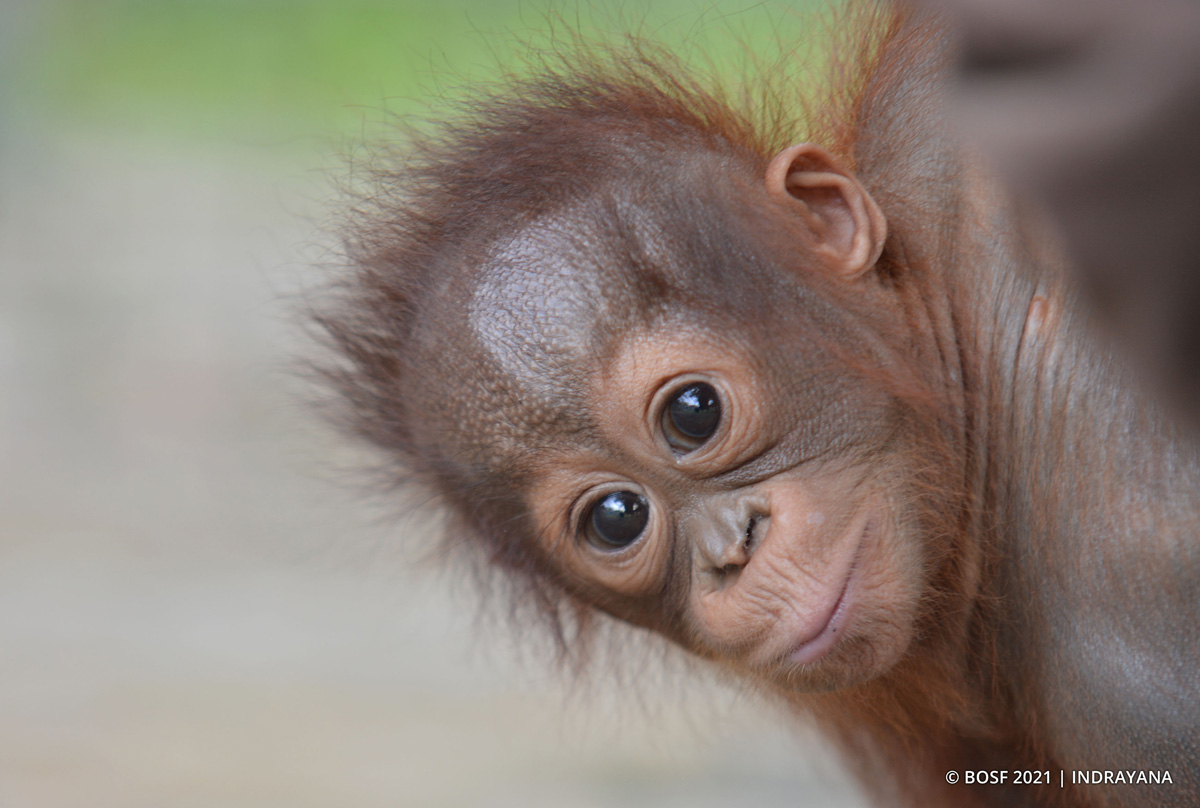 April 7, 2021 — In the last two months, the BOS Foundation has been involved in, yet again, three more orangutan rescues in Central Kalimantan. The result has been the intake of infant orangutans, Onyer, Ramangai, and one who has yet to be named, at the Nyaru Menteng Orangutan Rehabilitation Centre. 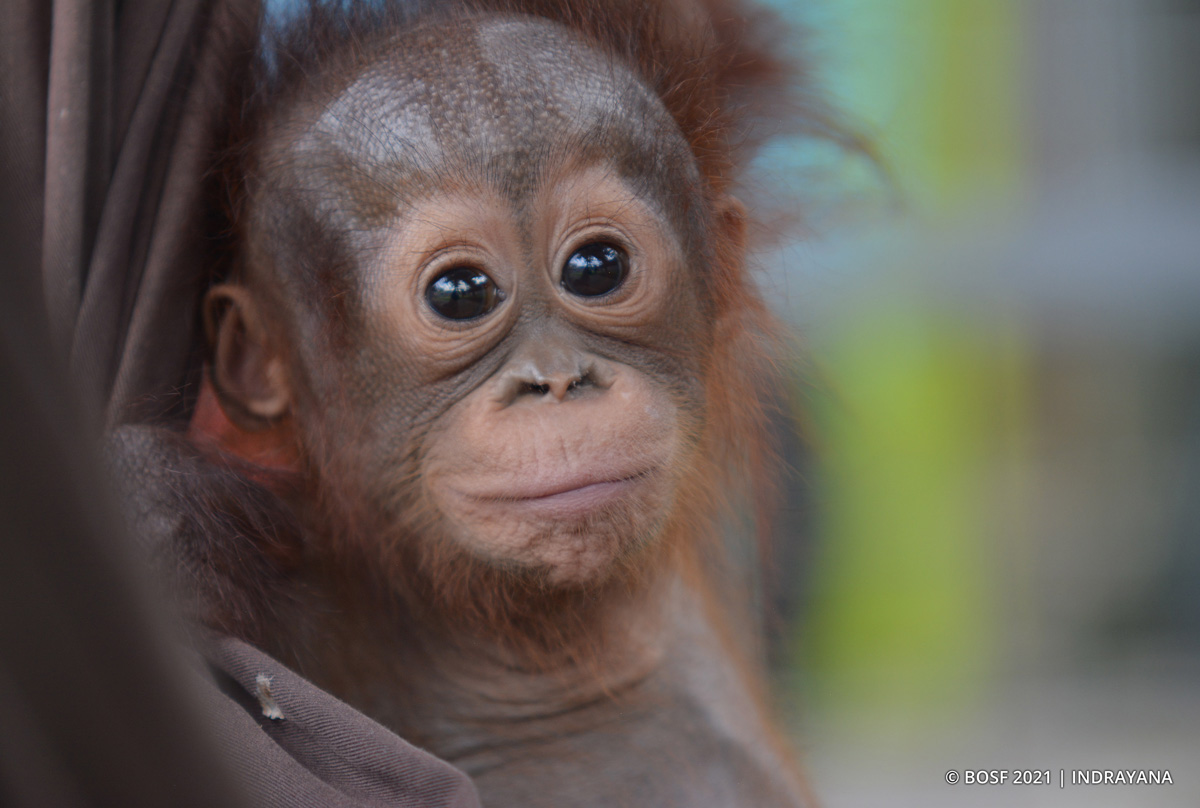 Onyer was rescued from Dahian Tambuk village, Gunung Mas Regency, Central Kalimantan, by the Central Kalimantan BKSDA’s wildlife rescue team. He was subsequently handed over to the Nyaru Menteng Rehabilitation Centre on 15 February.

The Central Kalimantan BKSDA’s wildlife rescue team confiscated the 10-month-old male infant from a local resident, who later claimed to have found Onyer alone in a forest area not far from his field.

Upon arriving at Nyaru Menteng, Onyer immediately underwent an examination and was found to be in good health. He is currently undergoing quarantine, during which he will have his health regularly monitored prior to joining the Nursery Group.

On his first day at Nyaru Menteng, Onyer was very nervous. This is understandable, given that he was in a new environment with unfamiliar faces. Onyer was unsettled at night and cried whenever a surrogate mother stood up, perhaps out of distress that he might be left alone again.

Thankfully, Onyer has a fairly good appetite and likes to drink milk and eat fruit. He is currently suffering from a mild flu and our medical team is routinely administering nebuliser treatment to help him recover. Onyer has started playing on the swing and climbing low on the enrichment infrastructure. 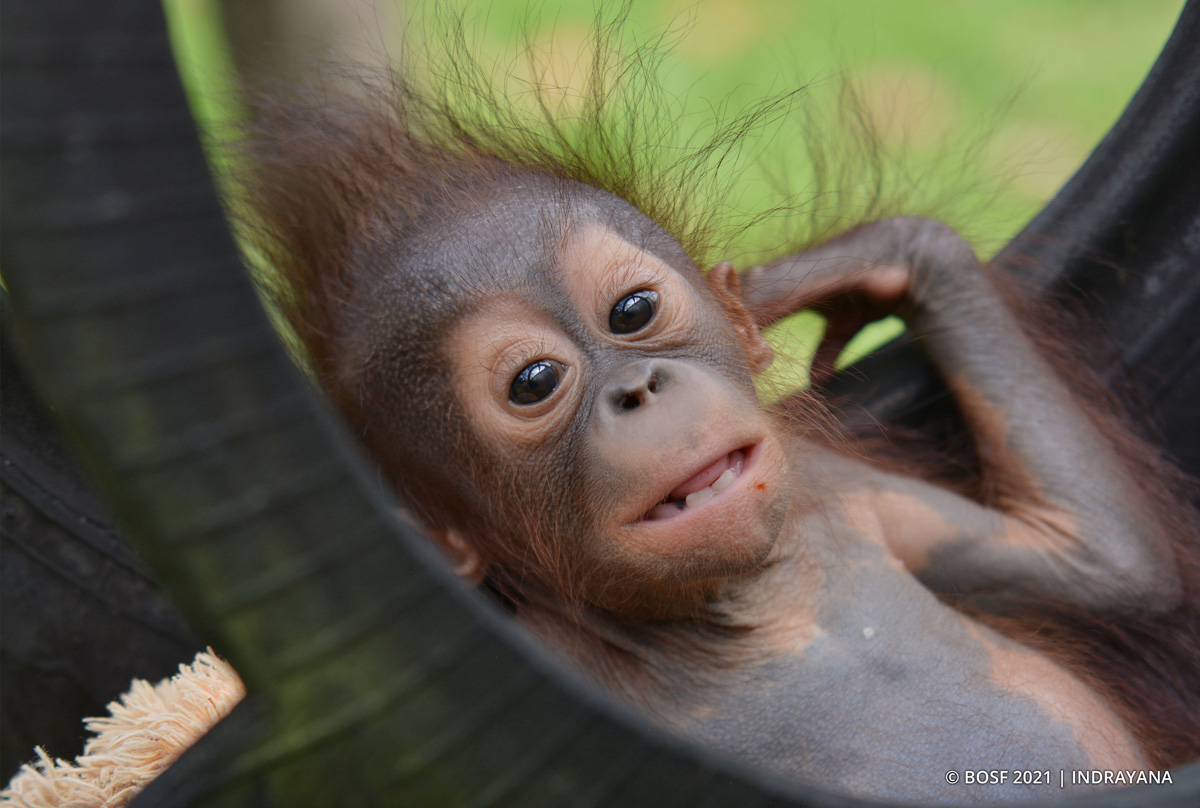 Ramangai was rescued from the Mahup area of Katingan Hulu, along the Mangei River. This 6-month-old male was handed over by a resident of Marikit sub-district, Katingan Regency, Central Kalimantan, on 1 March. A joint team from the Central Kalimantan BKSDA’s wildlife rescue team and the BOS Foundation travelled for seven hours to reach the location.

According to the local villager who was keeping him captive, Ramangai was discovered in the forest by the villager when he was hunting for birds. The villager-hunter said he was shocked to suddenly see a baby orangutan fall from a tree, without any trace of its mother. He said he was unsure of what to do, because he understood that it would burdensome to bring the baby home. However, he said he could not bring himself to leave the baby orangutan behind, as he felt sorry for him. The hunter said he knew that orangutans were protected by law, so he decided to take the baby home and report his finding.

As he was deep in a forested area, the hunter claimed that he had to carry Ramangai for three days, and fed him only coffee and bananas, which resulted in the baby orangutan becoming severely dehydrated and weak. Once he arrived home, the villager gave him sweetened condensed milk in the hope of boosting Ramangai’s condition. He also reported his finding to the Central Kalimantan BKSDA, which immediately formed a joint team with the BOS Foundation’s Nyaru Menteng staff. 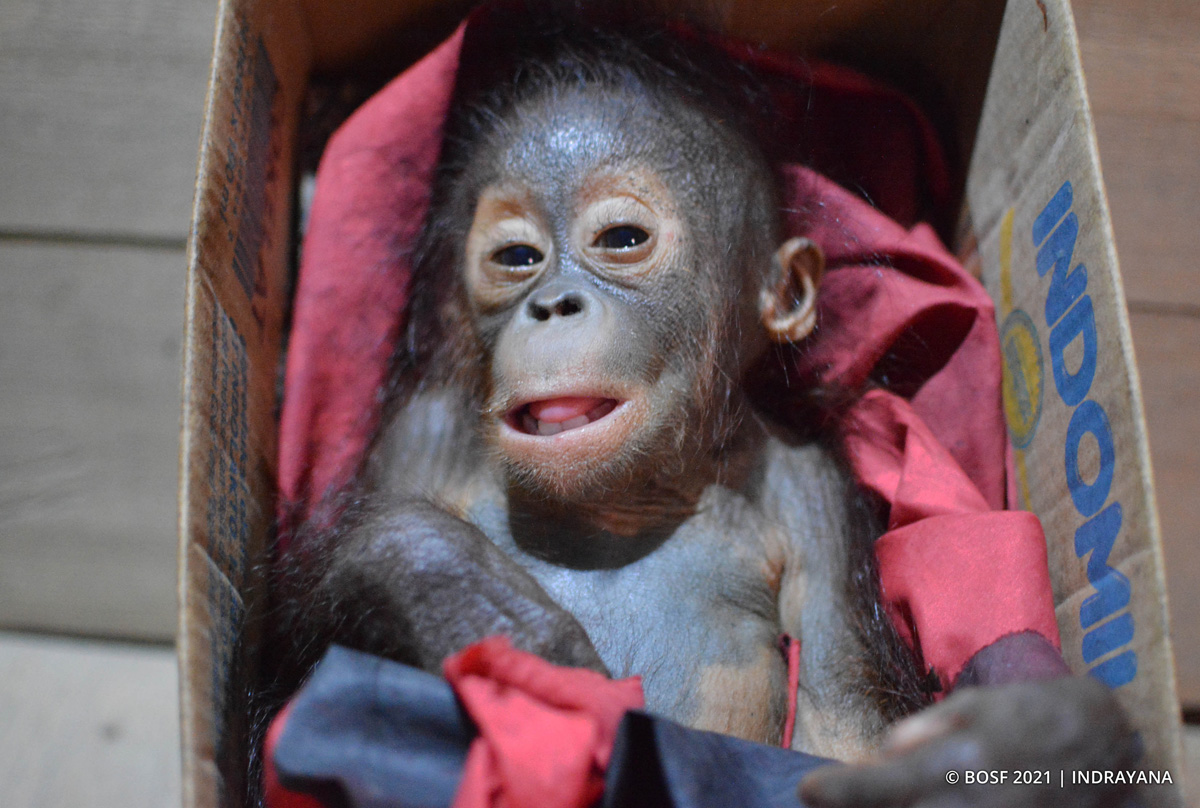 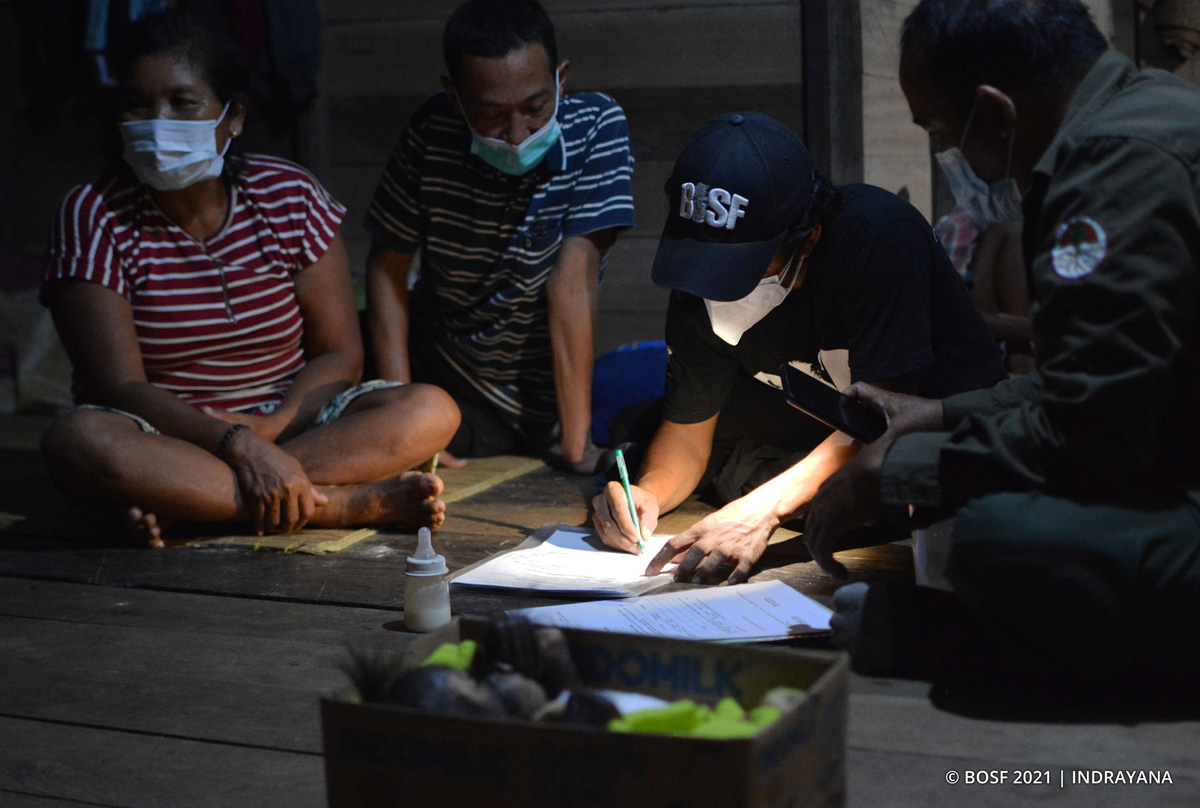 On the way to Nyaru Menteng, Ramangai was given fluids via an IV, as he was still extremely weak. Our veterinarian who participated in the rescue said that Ramangai was still suffering from dehydration.

In quarantine, Ramangai has been quite restless, especially at night. This is, of course, due to the trauma of living without his mother and being thrust into a new environment full of strange humans. After two days of treatment, Ramangai had his IV drip removed as he we fully rehydrated. However, Ramangai still has a mild fever, which we are closely monitoring. Unlike Onyer, Ramangai prefers to sit quietly in a basket, supervised by our dedicated surrogate mothers.

Baby Orangutan Yet to be Named 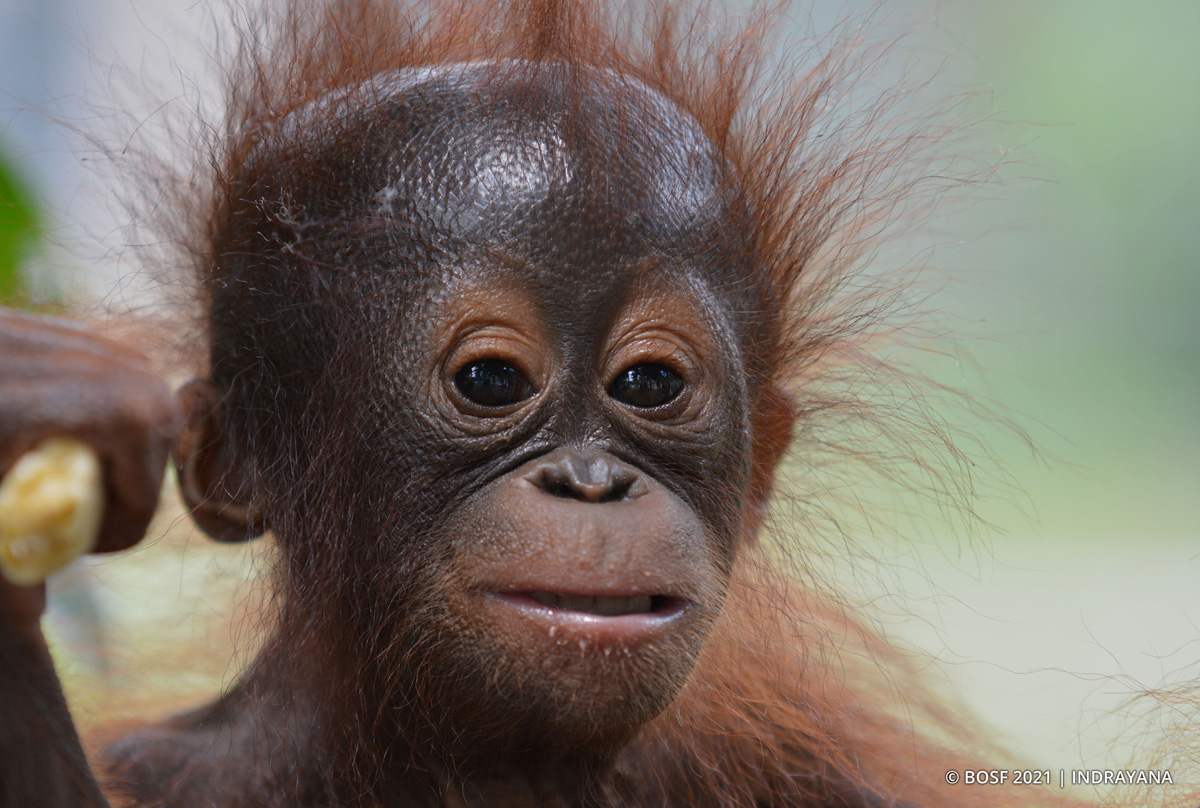 Another baby orangutan was handed over to the Nyaru Menteng Orangutan Rehabilitation Centre on 23 March by the Central Kalimantan BKSDA’s wildlife rescue team. The 9-month-old female was immediately examined by Greggy Poetra, one of our veterinarians at Nyaru Menteng.

The baby orangutan was discovered by a farmer from Muroi Village, Kapuas Regency, Central Kalimantan. The BKSDA’s wildlife rescue team said the farmer claimed to have found the baby while he was out fishing. He took care of her for about one week and fed her a diet of powdered milk, before voluntarily handing her over.

Vet Greggy’s exam indicates that the tiny orangutan is in generally in good health, and she has a strong appetite for bananas and milk. She is currently in quarantine with Onyer and Rawang while awaiting the results of ongoing tests.

We hope that these three orangutans will all make a full recovery during their time in quarantine. We cannot wait to see them join the Nursery Group!