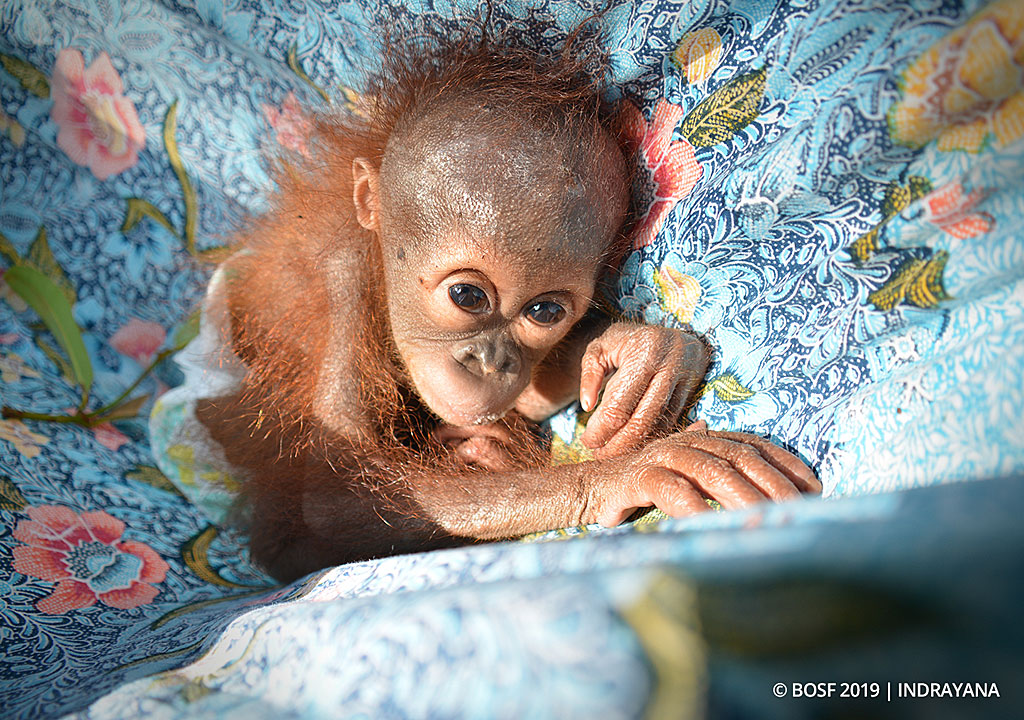 25 July 2019 — In 2016, the International Union for Conservation of Nature (IUCN) – an international union comprised of both governments and civil society organizations that provides the public information on the worlds biodiversity – raised the extinction risk of the Bornean orangutan from endangered to critically endangered. This change was largely due to the massive habitat loss inflicted by the conversion of forests into monoculture plantations, mining sites, and settlements. It was also aggravated by the illegal pet trade and climate change.

Despite being protected by law, orangutans are on the brink of extinction and continue to be victimized. Recently, the BOS Samboja Lestari and Nyaru Menteng centers received another four orphaned baby orangutans, all of whom will now have to undergo a long rehabilitation process.

On 6 May, 2019, the BOS Foundation’s Nyaru Menteng Orangutan Rehabilitation Centre took in an 18-month-old male orangutan who weighed only 2.5 kilograms. This orangutan was handed over by a local resident of Seruyan Regency, Central Kalimantan. The resident said he had received the baby from a relative living in Danau Seluluk village of the same regency, who, allegedly, had found the baby roaming alone, separated from its mother.

Upon his arrival, it was evident that he was extremely weak as he was suffering from dehydration and severe malnutrition. His body was covered in abrasions and his hair was knotted and messy. The medical team immediately started intensive treatment on this frail baby in the Nyaru Menteng clinic. In the following days, he spent the majority of his time sleeping in a hammock and was completely uninterested in play. 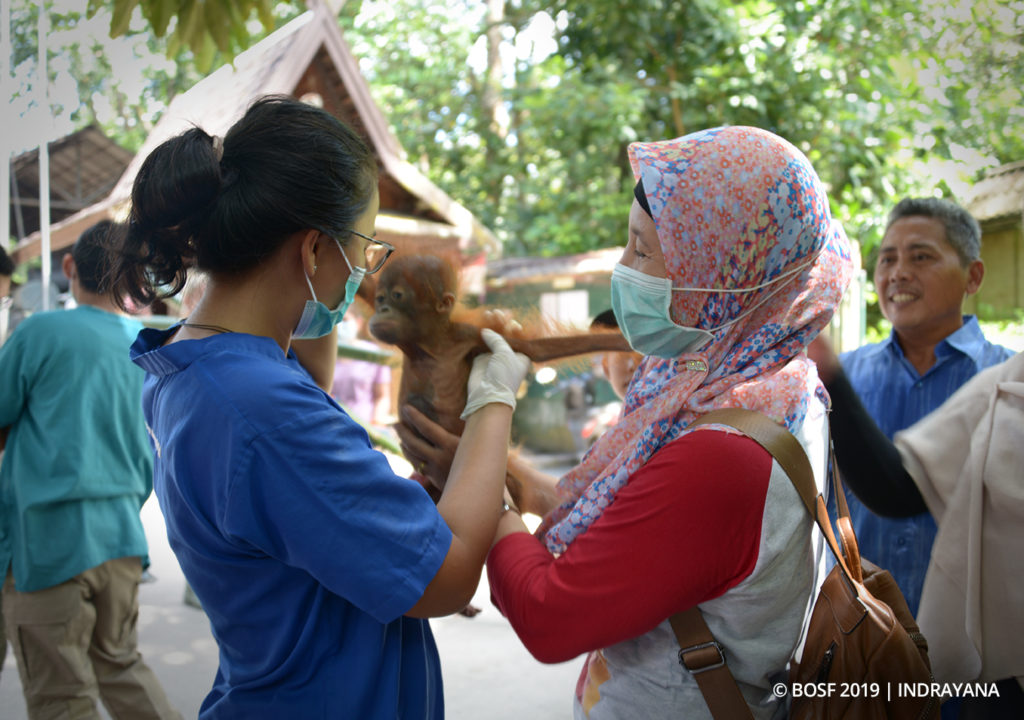 After a month of treatment in the clinic, the baby’s condition had vastly improved. He had gained weight, would actively play, and was able to climb tall trees in the forest playground outside the clinic. He had grown to love playing with leaves and was accepting the fruits offered by our surrogate mothers. 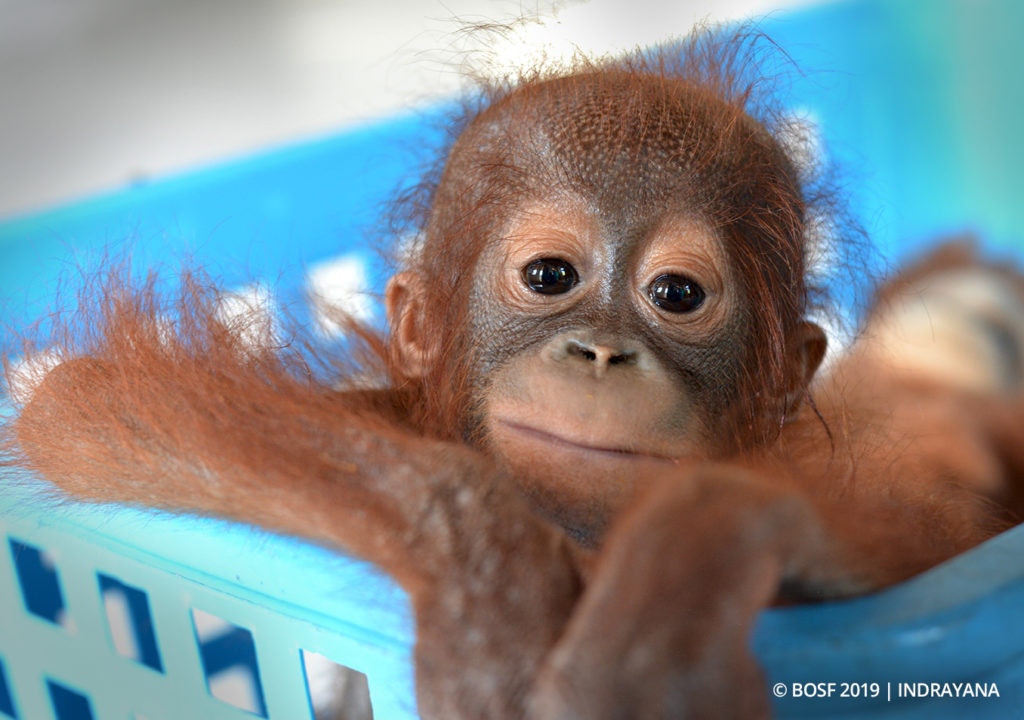 The male orangutan after being rescued

Six weeks after the arrival of male baby, the Central Kalimantan Natural Resources Conservation Agency (BKSDA) delivered a 6-month-old female orangutan to Nyaru Menteng. Weighing only 2.6 kilograms, she was handed over to the BKSDA on 22 June, 2019 after being found in Sumber Makmur village, Dadahup Sub-District, Kapuas Regency, Central Kalimantan. As with the previous orangutan, the baby girl arrived both weak and dehydrated. Covered in cuts and tree sap, we suspected that she had only recently been stolen from her forest home. 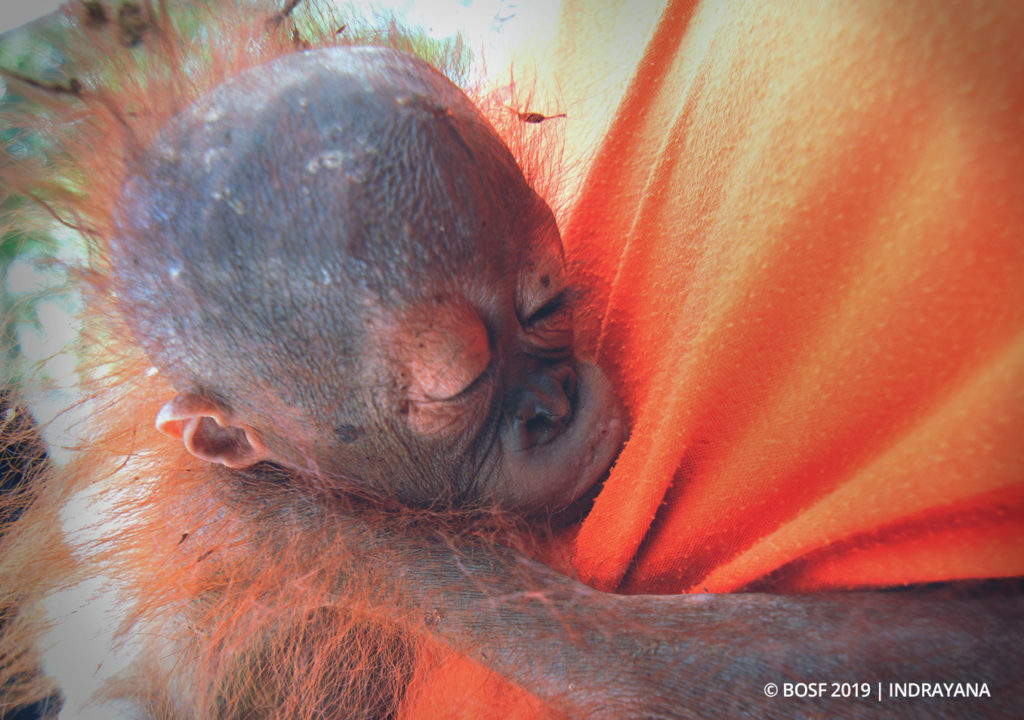 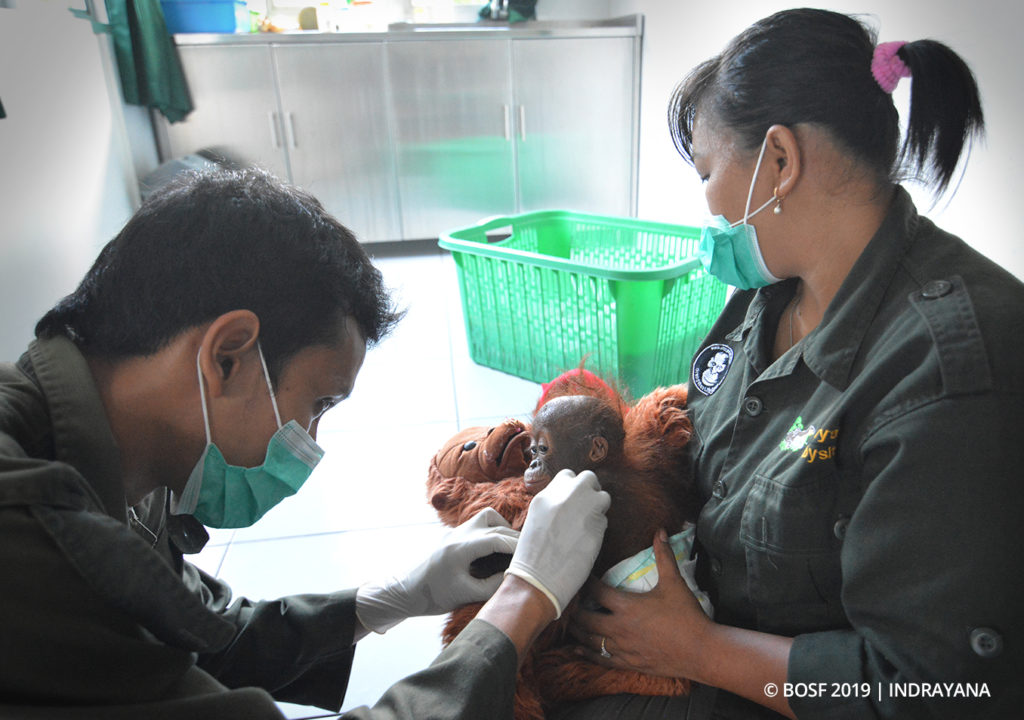 Less than a week later, our Nyaru Menteng staff received another 6-month-old male orangutan, rescued by the BKSDA from Telok Village, Katingan Regency, who had been kept as a pet for several days. When he entered at Nyaru Menteng, he was in a terrible way, severely dehydrated and with a swollen left toe. 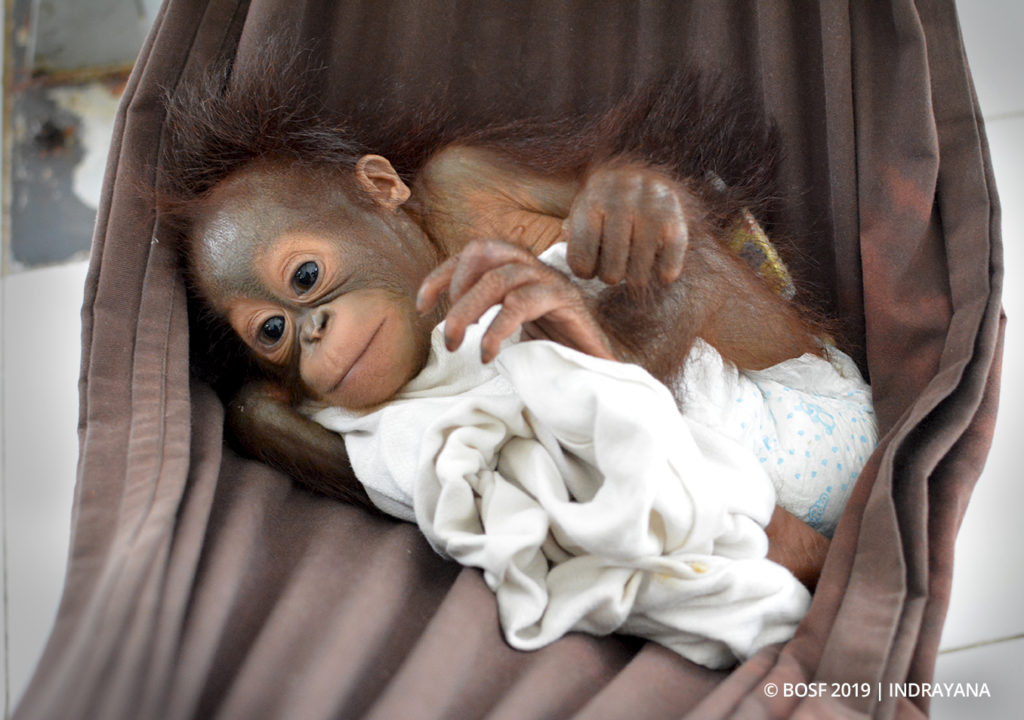 Thanks to the treatment and care provided by our dedicated Nyaru Menteng medical team, all three babies are on the road to recovery. While they are still a little weak and spend the majority of their time resting in hammocks, their appetites are healthier and they eat the fruits offered by our surrogate mothers. As they begin to adjust to their new environment, and they are growing more confident, with two of them even reaching out for nearby leaves to pluck and taste. They are also slowly climbing and moving out of the hammocks.

Despite their progress, these three new babies must still undergo further testing and treatment at the quarantine facility in the Baby House complex to ensure they are in good health before they can join the other baby orangutans in the Nursery Group.

The New Kid in Samboja Lestari

A 3-year-old baby orangutan was recently brought to BOS Foundation’s Samboja Lestari Orangutan Rehabilitation Centre after being rescued by the East Kalimantan BKSDA from a local farmer of Salo Cella village, Muara Badak Sub-District, Kutai Kartanegera Regency, East Kalimantan. The farmer claimed to have found her wandering alone in his field and had kept her as a pet for nearly two years. During her captivity, she was chained to a tree next to the house and fed primarily rice and coffee. She rarely received food appropriate for a baby orangutan, such as fruit and milk. Luckily, an initial examination showed that she was in relatively good health. She was also exhibiting some natural behaviors, as she occasionally kiss-squeaked at the humans around her. 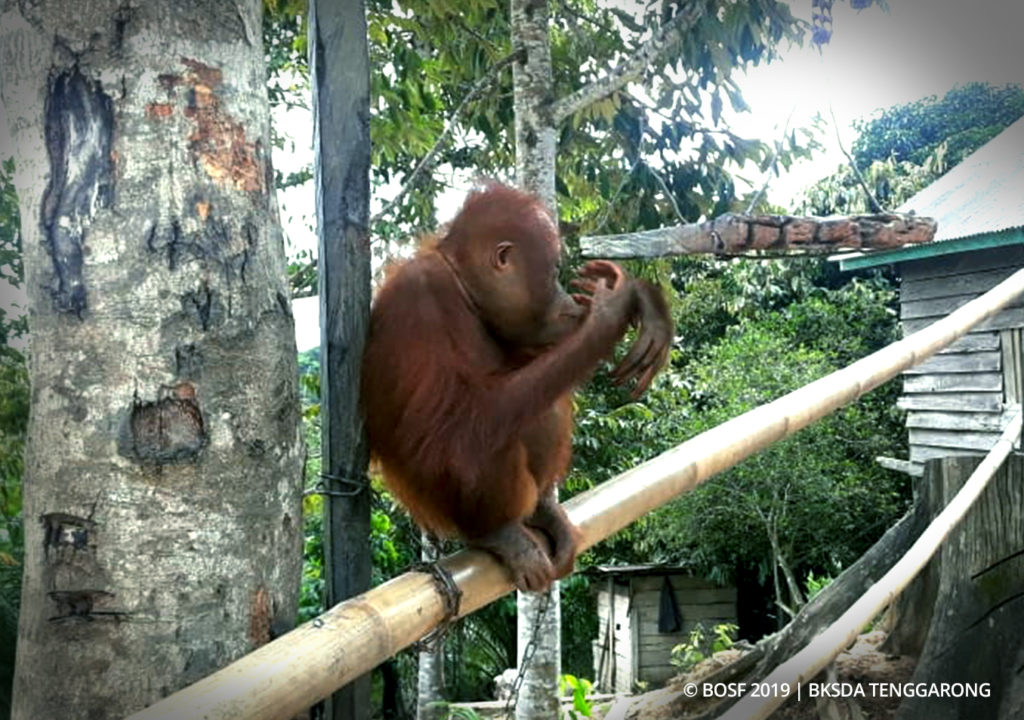 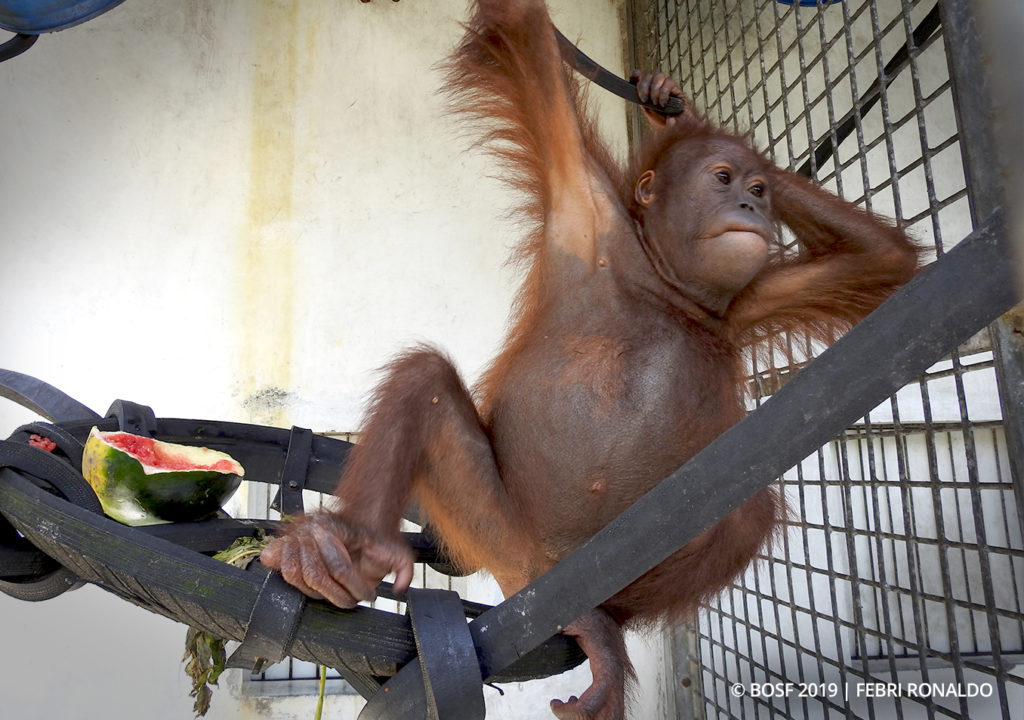 This female baby orangutan is being temporarily housed in the Quarantine Complex at the Samboja Lestari clinic while we await the results of her general health examination. After a few days in the complex, she slowly began to accept natural foods and was happy to taste-test a selection of fruits and leaves. She also took a liking to milk, which is a vital source of daily nutrition. As she grows comfortable with her surroundings, she is starting to play, climb, and dangle from the ropes in the complex.

It breaks our hearts each and every time a new orphaned baby orangutan arrives at our centers. We will keep working to increase public awareness on the important role of orangutans in regenerating forests, and the steps we can all take to help protect them. Together, let’s save orangutans from extinction!