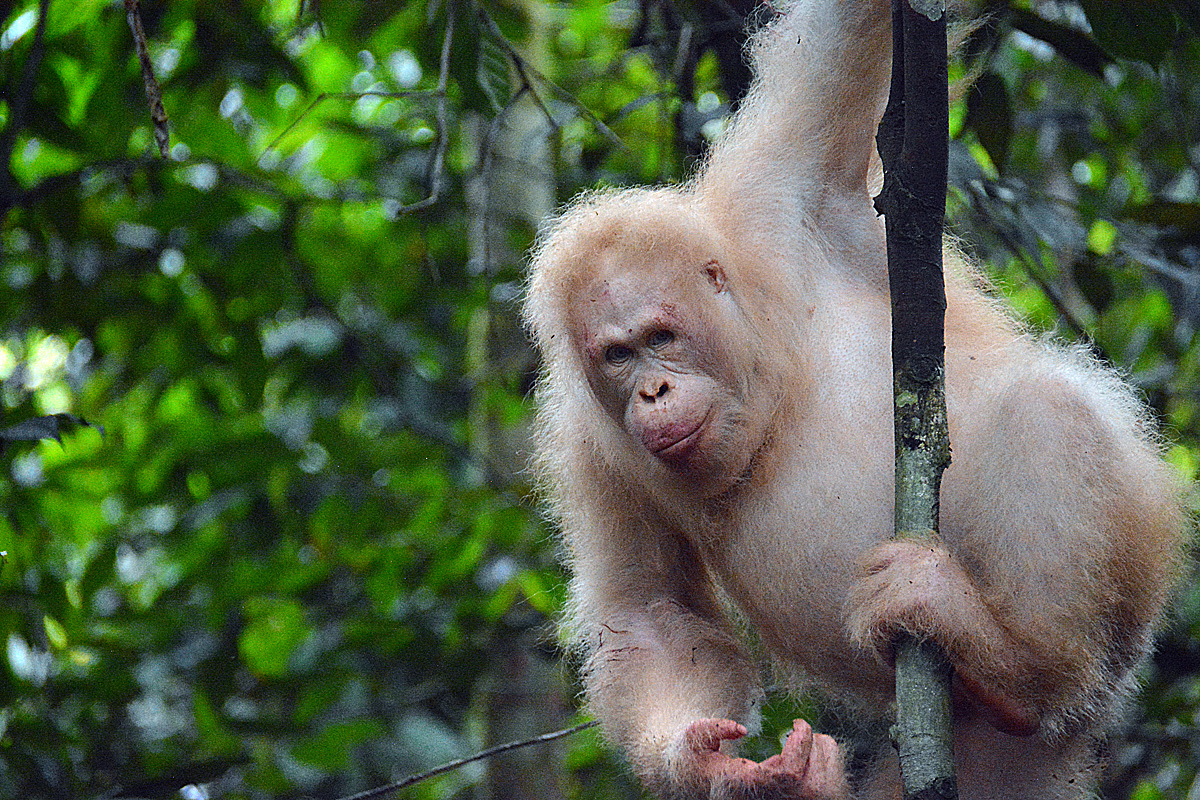 While monitoring Unyu, one of newly released orangutans, the team looked on as he encountered Alba, the only albino orangutan known to man.

Their immediate greeting served as a heart-warming reminder that during her time at the BOS Foundation’s Nyaru Menteng Rehabilitation Centre, Alba had been housed together with Unyu.

The Director of Biodiversity Conservation, Indra Exploitasia, welcome this discovery and stated that this was an interesting reunion.

“I requested the PRM team – consisting of staff from the National Park Authority and the BOS Foundation – to continue observing Alba for the next three months. We really want to ensure that Alba can thrive and live independently in this national park.”

Nearly three years ago, on 29 April 2017, the Central Kalimantan BKSDA, in collaboration with the Kapuas Hulu Sector Police and the BOS Foundation, rescued Alba in Tanggirang Village, Kapuas Hulu District, Kapuas Regency, Central Kalimantan. Following her rescue, Alba spent almost two years in Nyaru Menteng, before she was released back into her natural habitat in TNBBBR, on 18 December 2018.

Head of the Bukit Baka Bukit Raya National Park Authority (BTNBBBR), Agung Nugroho added that the PRM team consists of individuals from local communities who bear the responsibility of ensuring that the orangutans released in this national park can thrive. Their participation also guarantees the sustainability of the program, which is very important in vital for effective nature and biodiversity conservation.

“I have received reports that Alba is capable of extensive exploration, skillful foraging, and deft nest building. She also socializes with other released orangutans within the national park. This is truly positive. We all hope that Alba continues to survive in this forest, and live wild.”

The BOS Foundation CEO, Dr. Ir. Jamartin Sihite, said that his men are committed to working together with the Directorate of Biodiversity Conservation and the Bukit Baka Bukit Raya National Park Office in conducting observations and monitoring the released orangutans within the national park.

“Through this joint effort, we can assess the success rate of orangutan and habitat conservation efforts in Central Kalimantan.”

From her release in December 2018 through the end of 2019, observations showed that, on average, Alba spent 56.5% of her active hours in the forest feeding, 27.2% of her time traveling, 13.8% of her time resting, and 2.2% of her time engaged in other behaviors, such as nesting and social interactions.

Most recently, Alba was observed in February of this year, and the team will continue to observe her regularly for the foreseeable future. In addition to Alba, the other released orangutans will also be observed through regular patrols and monitoring to ensure that they can survive in the wild without human assistance.

Conservation work is a collaboration that requires all to actively participate. We always welcome support from others who strive to protect the environment, for the benefit of Indonesia and beyond.

ABOUT THE BOS FOUNDATION

Founded in 1991, the BOS Foundation is a non-profit Indonesian organization dedicated to the conservation of Bornean orangutans and their natural habitats, working together with local communities, the Ministry of Environment and Forestry of the Republic of Indonesia, and international partner organizations.

Since 2012 until now, there have been 20 natural births in the wild at the three release sites. Of these 20 births, there are 4 ‘second generation’ babies born in the wild by orangutans that we previously rehabilitated in both East Kalimantan and Central Kalimantan.