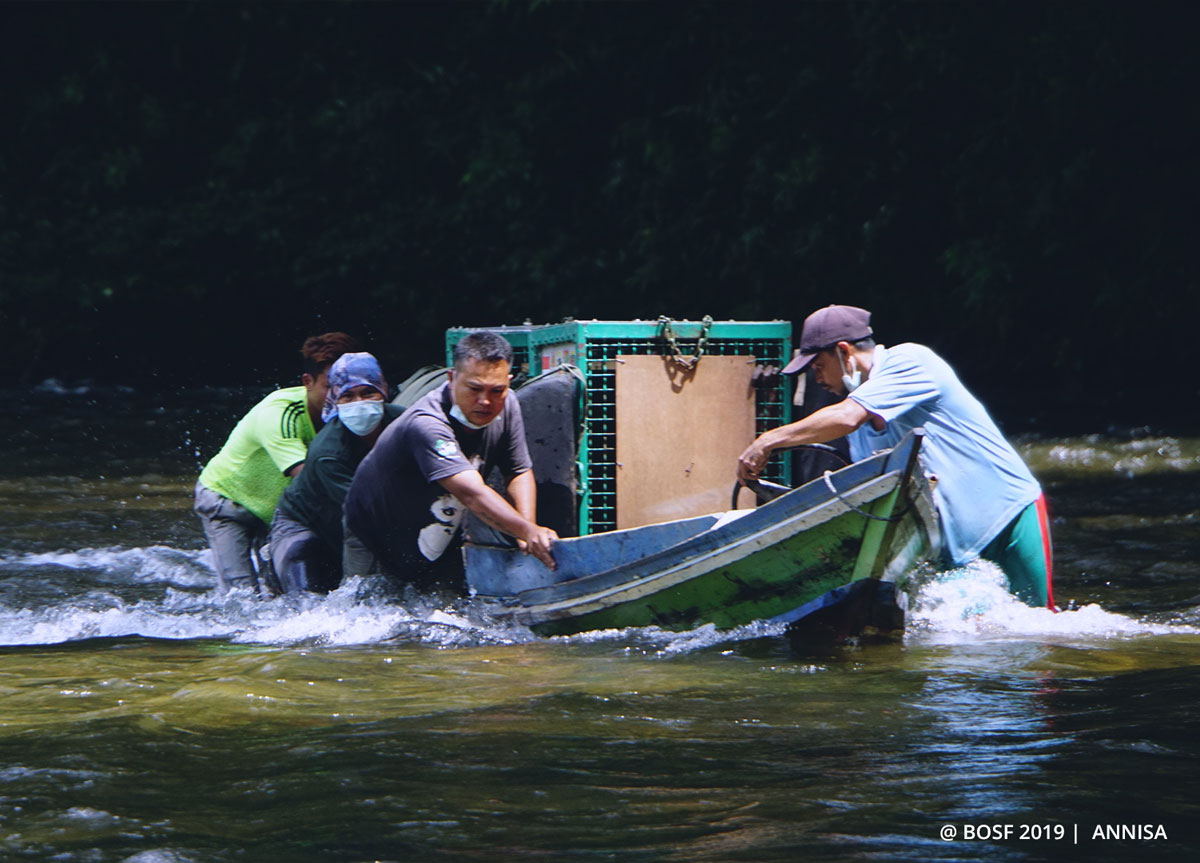 December 5, 2019 — The Borneo Orangutan Survival (BOS) Foundation, in collaboration with the Central Kalimantan BKSDA, the Bukit Baka Bukit Raya National Park (TNBBBR) Authority, and USAID LESTARI, has released 17 more rehabilitated orangutans from the Nyaru Menteng Orangutan Rehabilitation Centre and translocated one wild orangutan, to the forests of TNBBBR in Katingan Regency, Central Kalimantan. The distinguishing factor for this release, compared to past events, is the release of orangutans in two different areas located far apart from one another: the Bemban and the Hiran watersheds within TNBBBR.

This new initiative was taken to ensure that the release of a large number of orangutans is well-distributed and best encourages natural orangutan distribution for the newly released individuals. In light of this, we decided to conduct the release in three departures. The first one, involving the transport of nine orangutans to the Bemban watershed, was carried out smoothly. But it was a different story for our releases at the Hiran watershed, where travel can be more difficult and risky.

We started using the Hiran River Basin as an orangutan release site in August. We then released more orangutans there in September, returning a total 16 orangutans to their natural habitat during these two releases. This watershed presents a more challenging river trip, with many shallow cascades that make boat navigation a challenge. The riverbanks are also dominated by steep cliffs, making it even more difficult to release orangutans on safe banks.

During this most recent release, we transported eight rehabilitated orangutans and the one wild orangutan in two separate trips to the Hiran watershed, on 26 and 28 November. Prior to departure, our medical team sedated the orangutans to be transported and performed a general health check on them at the quarantine complex, before placing them inside the transport cages.

After the orangutans were moved into the transport cages and had recovered from the effects of the anaesthesia, the release team departed from Nyaru Menteng to our release point in the Hiran River Basin. 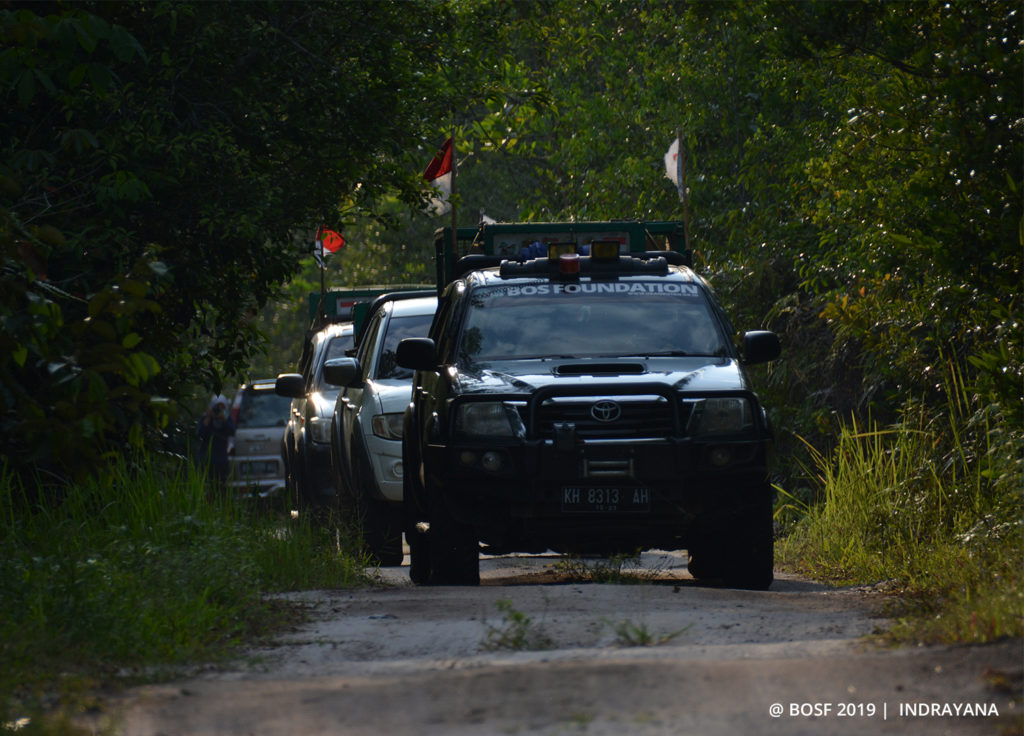 It took about six hours by road to reach the village of Tumbang Melawan, the last point before we set off in motorised boats known as kelotok. During the road trip, we stopped every two hours to give the medical team a chance to check up on the orangutans, and to feed and hydrate them.

From Tumbang Melawan village, we embarked on the final leg of the trip, via the river. This particular stage often presents extraordinary challenges for us, as we frequently experience during the annual dry season. Due to low water levels during these times, the trip can be plagued by the need to navigate the boats through rocky riverbeds, which has proven to be extremely tiring and time-consuming.

But this time, due to an increase in rainfall in the days leading up to the release, the river was overflowing. Despite the expertise of our boat drivers, the strong current presented an immense challenge, forcing the team to hold on tight while struggling to sit still. We managed to reach the release point in about six hours, an hour quicker than the boat ride taken in our August and September releases. Although the current helped with a swifter journey, we were forced to make a lot of repairs; especially on the motor propellers, which would frequently hit submerged tree trunks and rocks along the way. 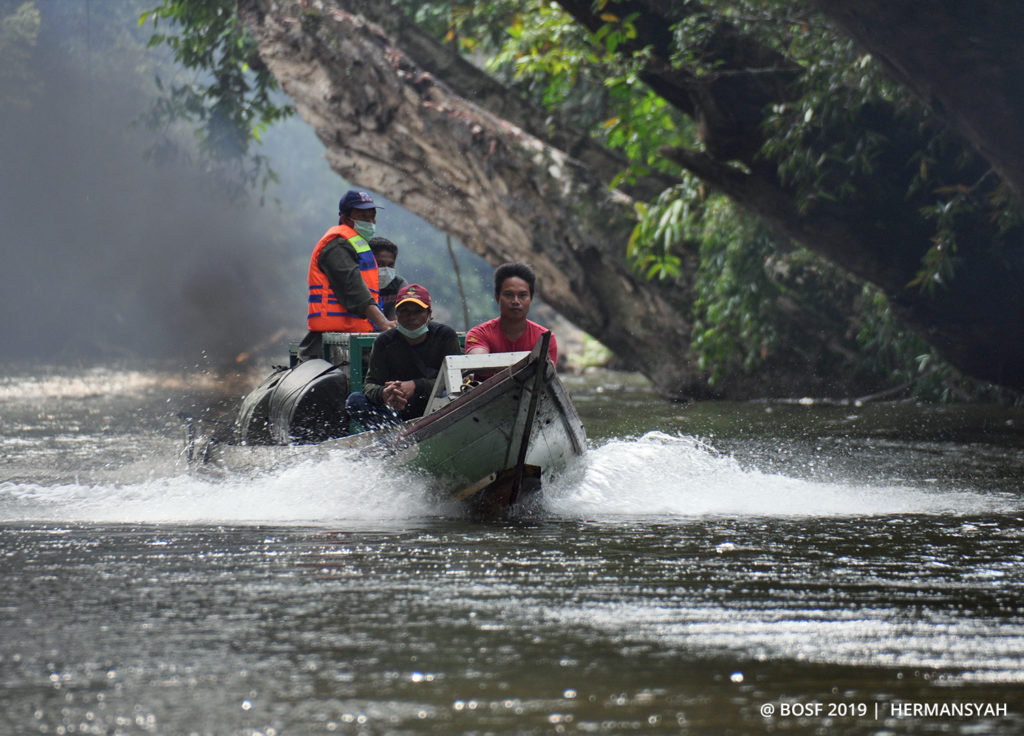 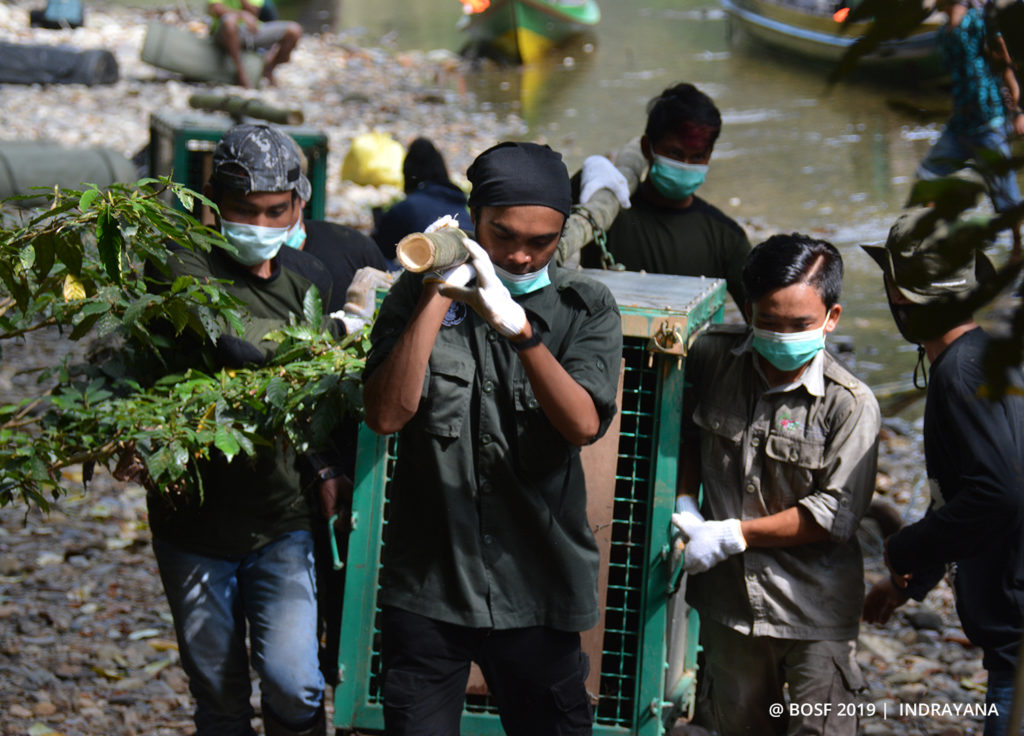 The release for the first group in the Hiran watershed was conducted on 27 November. The first orangutan released that day, Jeanifer, rushed to climb the nearest tree the moment that her cage was opened by Kaemita Boediono, one of our awareness campaigners. Anoux, Bolot, Pandu, and Valent followed suit and quickly climbed up into the forest canopy – an orangutan’s safe place – to observe their new surroundings. The post-release monitoring (PRM) team noted that all of the released orangutans were adapting well, including wild orangutan Pandu. Among them, Valent was the only one to disappear immediately into the thick forest of the TNBBBR.

The second group arrived two days later, on Friday, 29 November. On this day, the trip was even faster. We were able to release the orangutans just after midday; this time hounded by torrential rain. The cages in this group were opened by Iwan, the PRM team coordinator; Aji Badrunsyah from the TNBBBR Authority; Pichon, the camp coordinator; and Suli Partono, a paramedic at Nyaru Menteng. The orangutans in this batch – Lexy, Leggy, Ariel and Aox – all rushed to climb up into the trees to enjoy their newfound freedom. 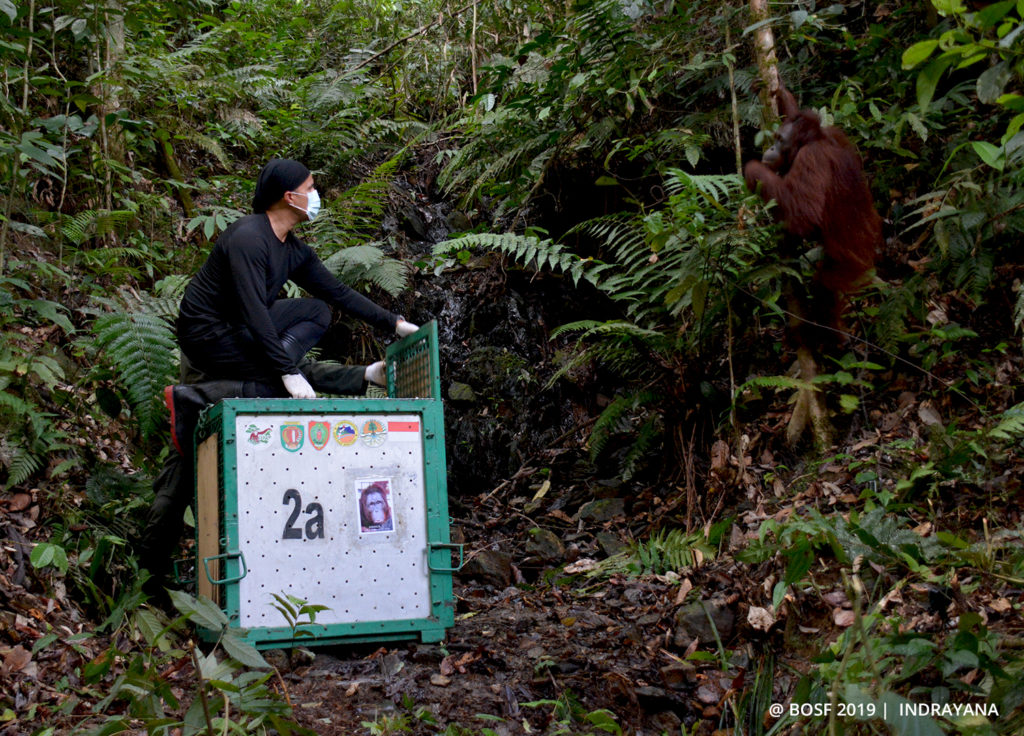 As soon as the orangutans were released, our PRM team quickly took over to carry out their task of following the orangutans and recording their activities. Our PRM team members have a huge responsibility, as they need to work hard to collect as much behavioural data as possible from these newly-released orangutans.

The PRM team has since reported that the orangutans have been doing well in their first few days in the forest. They have all been observed eating forest foods and making nests to rest within.

Our team will continue to monitor their progress, to ensure that they are thriving and living happily in the forests of TNBBBR.